The influence of new derivatives of 9,10-anthraquinone with benzoylthiourea, thiazole, triazole and amino acid fragments on the activity of membrane-associated tyrosine kinases was investigated. Inhibitors of protein tyrosine kinase activity of the membrane fraction, as promising agents to search for new potential anticancer agents among the studied compounds, were discovered.

Tyrosine kinases (TKs) are a large family of receptor and nonreceptor enzymes that catalyze transfer g-phosphate group to the hydroxyl group of tyrosine residue on target proteins. Tyrosine phosphorylation of signal transduction molecules is a major event that controls the most fundamental processes of cells, such as the cell cycle, proliferation, differentiation, motility, and cell death or survival. Receptor TKs transducer signals from outside the cell and function as relay points for a complex network of interdependent signaling inside the cell. The binding of specific ligands such as insulin or various growth factors to the extracellular domain of receptor TKs results in autophosphorylation of tyrosine residues in cytoplasmic domain that recognized as docking sites for cytoplasmic signal molecules containing Src homology or phosphotyrosine binding motifs and leads to further activation of receptor TK activity. Overexpression of receptor TKs or their abnormally elevated activity causes dramatic changes in signal transduction pathways leading to tumor growth and malignant progression. Therefore, the development of TK activity inhibitors is a promising strategy for cancer treatment [1].

Many natural derivatives of the 9,10-anthraquinone and drugs based on them are widely used in medicine as an effective medications [2]. This fact has stimulated a broad search compounds-analogues and study of their pharmacological properties to create new synthetic and semisynthetic biologically active substances.

Compounds with the spectrum of pharmacological action similar to the anthracyclines and a significant antitumor activity are identified among a derivatives of aminoanthraquinones, mainly derivatives of the 1,4-diamino-9,10-anthraquinone, which containing 2-(2-hydroxyethylamino)ethyl group near nitrogen atoms [3]. Striking examples of such aminoanthraquinones as drugs are ametantron and mitoxantrone. Compounds with antibacterial, antiviral, antiinflammatory [4,5], purgative and hypoglycemic effects [2] were identified also among a derivatives of 9,10-anthraquinone. In particular, the emodyn as a derivative of 9,10-anthraquinone, has shown hypoglycemic action, antitumor activity against the lymphocytic leukemia [6], and cytotoxicity and inhibition of precursor incorporation into DNA and RNA in HL-60 human leukemic cells [7]. It was also found, that emodyn has inhibitory effect about protein tyrosinekinase [3,8].

Recent studies suggest that various bioactivities of anthraquinones are associated with the inhibition of key enzymes and transcription factors such as tyrosine kinases, phosphoinositol 3-kinase (PI3K), protein kinase C (PKC), NF-κB, and mitogen-activated protein kinase (MAPK) [3]. Those findings indicate that anthraquinones are capable of modulating signaling cascades in cells, which in turn encourages them to evaluation of the inhibitory activity and may be associated with the appearance of antitumor activity.

To date a various types of inhibitors of tyrosine kinase have been developed and used in clinical trials [9]. But high toxicity, high cost, significant side effects, low bioavailability and other factors limit their application in practice.

Сrude membranes from rat skeletal muscle were prepared as described by Cuatrecasas [10]. To obtain the membrane-associated proteins particulate fraction was solubilized by buffer containing 1% Triton X-100. The kinase assay was performed according to published procedures [11]. The reaction was carried out in 96-well plates precoated with polyGlu/Tyr substrate at pH 7.4 in the presence of 50 mМ HEPES, 20 mМ MgCl2, 0,1 mМ MnCl2, 0,2 mМ Na3VO4, 35 nМ АТP and 100 μM test compound with a final volume of 100 μl. Compounds were predissolved in 100% dimethyl sulfoxide (DMSO) as 10× stocks and diluted in distilled water just prior to use. The final concentration of DMSO in the reaction mixture was 2%. The treatment of solubilized membrane proteins with this concentration of DMSO had no effect on TK activity. Phosphorylation was initiated by addition of equal amounts of soluble proteins (20 μg per well) for 45 min at 37º. Phosphorylated tyrosine residue in polyGlu/Tyr substrate was measured by the enzymelinked immunosorbent assay. After incubation, the wells were washed 3 times with Tris-buffered saline containing 0.05% Tween 20. Next, HRP-conjugated anti-phosphotyrosine antibody (Sigma, USA) was added to the wells for a 1 h incubation at 37º. Wells were washed again and then incubated with peroxidase substrate o-phenylenediamine (Sigma, USA). The reaction was stopped by the addition of 100 μl of 2.5 N H2SO4 and the degree of tyrosine phosphorilation was quantified by reading the optical density at 492 nm by a plate reader. Basal level of TK activity (100%) was measured in the same assay in the presence of 2% DMSO alone.

In each experiment (n=4) all samples were tested in triplicate. Results were expressed as means±SE. The difference between groups was analyzed by standard Student’s t-test. P values less than 0.05 were considered statistically significant. 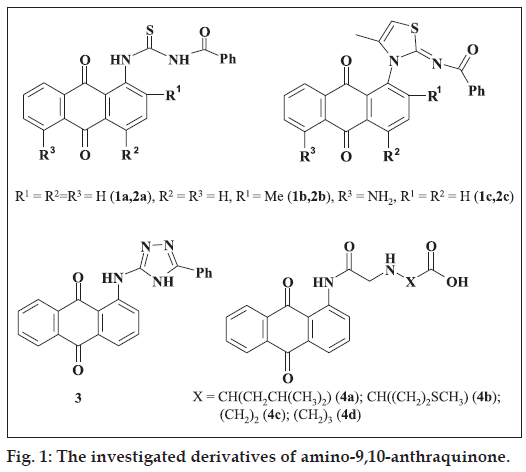 Fig 1: The investigated derivatives of amino-9,10-anthraquinone.

Investigation of influence of anthraquinone 1-4 on the protein tyrosine kinase activity of membrane fractions (i.e. TPs receptor, which may be uncontrollably activated in a case of carcinogenesis) was carried out under the condition that the incubation medium with classical components and derivatives of 9,10-anthraquinone were present in concentration of 100 μМ. As the object of our study were selected proteins of cell membranes of muscle tissue of nonlinear healthy rats. The obtained results were compared, taking as 100% index of activity under the condition of presence in the incubation medium only solvent the DMSO (basal activity).

Action of the new synthesized compounds on tyrosine kinase activity was showed. The anthraquinones 1a-c, 2a-b, 3 and 4a,b,d cause inhibitory effect on the activity of membrane-associated tyrosine kinases (fig. 2) within of 60-82%. Inhibition effect in research concentration of thiazole 2c and amino acid derivative 4c is absent (obtained numerical values as the result of incubation did not differ from the basal parameters, and therefore can be argued that derivatives of antraquinone 2c and 4c don’t have influence on functioning of the enzymes of this group).

Fig 2: Effects of derivatives of amino-9,10-anthraquinone 1-4 on the TK activity of membrane-associated proteins.

It was established that among of the new derivatives of 9,10-anthraquinone containing benzoylthiourea, thiazole, triazole and amino acid fragments are tyrosine kinase inhibitors of membrane-associated proteins. These results indicate the expediency of further experimental researches with the purpose to find new potential anticancer agents in the orders of the synthesized compounds.