Novel atomic absorption spectrometric and rapid spectrophotometric methods for the quantitation of paracetamol in saliva: Application to pharmacokinetic studies

Paracetamol (N-acetyl-p-aminophenol) has been in use as analgesic and antipyretic drug for over 50 years. It has been accepted as a very effective medication for the relief of pain and fever in adults and children [1]. A review of broad scope analytical interest such as chemical, physical and biopharmaceutical properties on paracetamol has been published [2,3]. Several spectrophotometric methods have been reported for the determination of paracetamol based on nitration [4,5], oxidation6-8 and hydrolysis to p-aminophenol followed by diazotization and phenolic coupling [9-13].

The reduction process of iron (III) by diclofenac sodium [14], salbutamol sulfate [15], captopril [16], amoxycillin [17] and ciprofloxacin [17] to iron (II) were used to quantify these drugs colorimetrically. The reversible redox system iron (III)/iron (II) was used as indicating aspect for the indirect flow-injection biamperometric determination of paracetamol18 and in simultaneous spectrophotometric determination of paracetamol by a differential kinetic method [19].

Liu and Oka described a spectrophotometric technique for the detection of paracetamol in serum and plasma based on the reduction of ferric 2,4,6-tris(2-pyridyl)- 5-triazine, to ferrous 2,4,6-tris(2-pyridyl)-5-triazine complex [20]. The method was specific to compounds that contain a phenolic hydroxyl group located in either Meta or para position on the benzene ring over a linear range from 25 to 400 mg/l [20]. The sensitivity of their method was not adequate to perform a pharmacokinetic study. Also some other drugs which have no phenolic hydroxyl group can reduce iron (III), like diclofenac [14], captopril [16] and ciprofloxacin [17]. Diclofenac and captopril are reducing agents due to the presence of aromatic amine (-NH) and thiol (-SH) groups in their structure.

In the present study, three methods were proposed for the determination of paracetamol based on spectrophotometric and atomic absorption spectrometry (AAS) techniques. The spectrophotometric methods (I and II) were based on the direct reduction of iron (III) with paracetamol and the hydrolysis of paracetamol to p-aminophenol, respectively. A Prussian blue color was formed due to the reaction of iron (II) with potassium ferricyanide, whose intensity is proportional to the concentration of paracetamol. P-aminophenol is a reducing agent due to the presence of phenolic hydroxyl and aromatic amine groups. The present study also aimed to develop a novel AAS method for the quantitation paracetamol in salivary samples where the literature reveals no researches cover the determination of paracetamol based on AAS. The AAS method based on the extraction of iron (III) from 6.0 M hydrochloride acid with diethyl ether (probably as the solvated complex [H3O(R2O)2+,FeCl4-] [21] and the aqueous layer was used for atomic absorption measurement of iron (II).

The spectrophotometric method II and AAS techniques were applied for the determination and assessment of the bioavailability of paracetamol using saliva samples. The pharmacokinetic study of paracetamol by means of saliva was considered feasible, since the ease of samples collection and analysis besides the good correlation between saliva and plasma levels of paracetamol [22].

Paracetamol was supplied by the Middle East pharmaceuticals and Cosmetics Laboratories, Palestine (Kempex BV Holland). Paracetamol tablets, 500 mg, were purchased from the pharmacy, Decamol (Megapharm) and Dexamol (Dexxon). Standard solutions of paracetamol (10 µg/ml) were prepared in deionized water and diluted as required. Potassium ferricyanide solution (1.0 mM) and ferric sulfate solution (1.0 mM) was also prepared in deionized water. All chemicals and reagents used were of analytical grade.

The extraction is performed based on the procedure described by Dordoni et al. [23] and Spooner et al. [24]. An amount of 1.0 g Na2SO4 and 10 ml of diethyl ether were added to 0.25 ml saliva aliquot or standard and mixed thoroughly. The diethyl ether layer was separated and evaporated. The residue was dissolved in 2.5 ml water and determined by spectrophotometric method II or AAS method.

Analysis of paracetamol from tablet dosage form in pharmaceutical preparations

Twenty tablets of paracetamol (500 mg paracetamol active ingredient) were accurately weighed and powdered, Decamol (Megapharm, Palestine) and Dexamol (Dexxon, Israel). A portion equivalent to 50 mg was dissolved in distilled water and analyzed by the recommended procedures.

The pharmacokinetic study has been approved by the Ministry of Health, PNA. Five healthy female volunteers, with ages ranging from 20-24 years and weights 55-75 kg, were enrolled in the pharmacokinetic study. In a randomized two-way crossover design, each subject received 1.0 g dose of paracetamol (2 tablets) on an empty stomach and overnight fast. Tablets were administered with 200 ml of water. No food was allowed for 4 h after which a light standard lunch was served. The volunteers were instructed to drink water regularly during the study to keep saliva flow. Three ml saliva samples were collected before drug administration as Blank and at 0.25, 0.5, 0.75, 1, 1.25, 1.5, 1.75, 2, 4, 6 and 8 h, a wash period of 7 days separated each two consecutive phases of the crossover. Saliva samples were centrifuged for 10 minutes and 0.25 ml of the supernatant was taken and analyzed using spectrophotometric method II or AAS method.

Figure 1: Reaction of paracetamol with iron (III) in spectrophotometric method I.

Paracetamol was hydrolyzed in acidic medium using boiling water bath to give p-aminophenol which reduced iron (III). Heating intervals and pH were optimized to ensure complete hydrolysis and oxidation. Different heating intervals were investigated where 10 min were found to be enough for the complete reaction. It was also observed that the absorbance remained constant in the pH range 1.0-3.0. Therefore, all the studies were performed at pH 1.0. The stoichiometry of the reaction was established as in method I and the iron (III) to paracetamol mole ratio was found 3:1 (fig. 2).

Figure 2: Oxidation and hydrolysis of paracetamol in spectrophotometric method II and AAS.

Different aliquots of the standard iron (III) were dissolved in 6.0 M HCl solutions and each sample was extracted with three 25 ml portions of diethyl ether. Iron (III) in the aqueous layer was determined colorimetrically using KSCN at 480 nm or by AAS method at 302.1 nm. The overall extraction efficiency was approximately 100% and 99.99% using colorimetric and AAS method, respectively.

Five replicate measurements were performed using the three proposed methods. The relative standard deviations (RSD) were 3.86, 5.0 and 2.55 for spectrophotometric method I, and II and AAS method, respectively. The proposed methods were applied for the recovery of paracetamol in its dosage forms. The obtained results using the proposed methods are in good concordance with the standard method of British pharmacopoeia [27]. The comparison through using t- and f- statistical tests confirm the high accuracy and precision of the proposed methods (Table 2).

Table 2: Assay of paracetamol in bulk and dosage forms by the proposed methods and official Method [27]

Table 3: Within- and between-day variability of proposed methods for paracetamol Determination

The effect of the presence of common excipients such as dextrose, glucose, saccharine sodium, starch, talc and magnesium stearate were investigated. There were insignificant interferences from these excipients. The most of drugs (ascorbic acid, caffeine, salbutamol, diclofenac sodium, amoxycillin and ciprofloxacin) and metabolites were reduced by iron (III) and paracetamol should therefore be extracted and separated before applying the methods.

Five healthy female volunteers were administrated 1 g of Dexamol and Decamol separately. The recovery investigations of standard saliva samples spiked with paracetamol are shown in Table 4. The recovered concentrations of paracetamol using the three proposed methods are highly correlated to the spiked amounts of paracetamol. The mean saliva concentrationtime curves based on spectrophotometric method II and AAS are shown in figs. 3 and 4, respectively.

Table 4: Recovery Of Spiked Paracetamol In The Control Saliva Samples 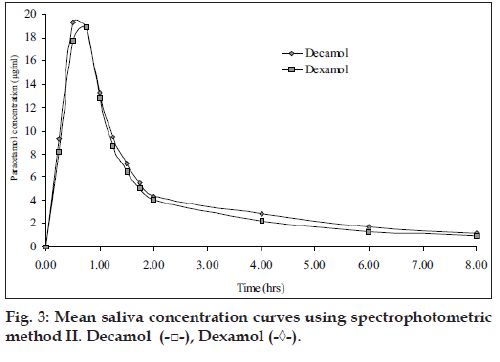 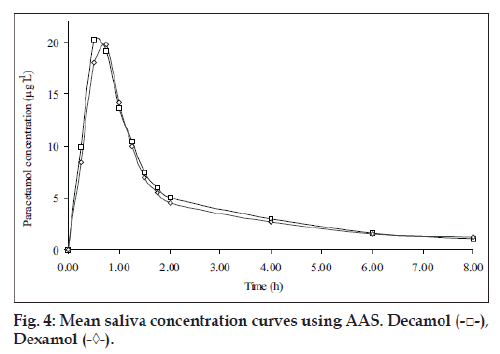 Paracetamol saliva concentration did not show any significant difference between the two brands at each sampling.

The pharmacokinetic parameters for the two brands, maximum salivary concentration (Cmax, µg/ml), time to maximum saliva concentration (Tmax, h) and area under the saliva concentration-time curve (AUC0-8 µg/ml h) are summarized (Table 5). The mean values of AUC0-8 oral bioavailability of Decamol tablet was 103% relative to Dexamol tablet (innovator brand) in each described assay. Thus, the bioavailability of the two brands was not significantly different; therefore the two products are considered bioequivalent.

Pharmacokinetic parameters after the administration of 1.0 g paracetamol in five healthy female volunteers

All the proposed methods are simple, rapid, accurate, and exhibit higher sensitivity compared to Zarei et al and Liu and Oka methods [19,20] and the AAS is a novel method. The extraction of paracetamol from saliva into diethyl ether improves the specificity of the assay. The statistical parameters and the recovery study data clearly indicate the reproducibility and accuracy of the methods. The proposed methods are suitable for the analysis of paracetamol in its pharmaceuticals formulations without any interference from the exipients normally found in commercial preparations. Spectrophotometric method II and AAS method are highly sensitive for the application in the pharmacokinetic studies.

Authors are thankful to the Middle East pharmaceuticals and cosmetics laboratories, Palestine and Alaqsa University. As well, we thank Prof. Abd Elrahem Ashor and the participant staff for their assistance.