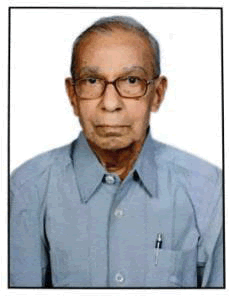 Professor Erraguntla Venkata Rao (Retd.) passed away on 19 Aug, 2020 (89 y old) at around 11 pm in Visakhapatnam due to cardiac arrest after a brief period of illness.

Prof. Venkata Rao born on 1st July, 1931 completed his studies in Andhra University during the years 1950- 59. He was one of the founder members of the Department of Pharmaceutical Sciences at Andhra University, Visakhapatnam and instrumental in the growth of institution by way of his rich contributions over a period of 4 decades in different capacities from 1953-91. He visited UK on a Commonwealth Scholarship and worked under Prof. Sir James Baddiley FRS, in Newcastle University, which led to the award of a Ph. D. degree in Bio-Organic Chemistry in 1964 on the topic "Studies on the Capsular Polysaccharides of Pneumococcus Type 10A", which work won him K. N. Welch Memorial Prize and this work also formed part of the 23-valent Pneumococcal vaccine (Pneumovax-23rm), which is official to Indian pharmacopeia 2007. Earlier to this significant contribution, Prof. Venkata Rao’s D. Sc. work at Andhra University on Thevetia neriifolia resulted in the discovery of a new clinically useful cardiotonic glycoside, peruvoside, the first modern drug discovery in India acclaimed by the International Scientific Community. This drug was developed for therapeutic use by M/s E. Merck and manufactured by an Italian Pharma Company, Simes, was listed in the Merck Index and Martindale-The Extra Pharmacopeia. Several other compounds his group isolated and worked on have found a place in the Merck Index.

Prof. Rao worked in various capacities before his appointment as Professor in Pharmaceutical Chemistry (1975-91) and has immensely contributed to the achievements of the department in this area. As the Head of the Department from 1985-88, Prof. Rao was responsible for shaping the department as one of the most prestigious Pharmaceutical Institutions in India. His research in the area of Pharmaceutical Chemistry, primarily in Natural Products and Pharmaceutical Analysis resulted in 165 Research Publications in Journals of National and International repute, 5 Patents, 17 Ph. D. Theses and 46 M. Pharm dissertations.

Prof. Venkata Rao and his co-workers have made significant contribution to the Medicinal Chemistry of a number of natural products, particularly cardiac glycosides, sulphated polysaccharides of green seaweeds, lignans and novel flavonoids, besides development of sensitive spectrophotometric and HPLC methods for the estimation of a number of drugs and their dosage forms of different pharmacological categories.

Prof. Venkata Rao has rendered yeomen service to the Pharmacy profession through his association with many organizations like IPA, Royal Society of Chemistry, APAS, UPSC, CSIR, UGC and NIPER. He was a member of the Pharmacy Council of India and President of the Association of Pharmaceutical Teachers of India (APTI). Prof. Rao had the distinction of being invited to be a Corporate Advisor of NATCO Pharma Limited, Hyderabad. Within a short period, he had set up a Natural Products Laboratory and could develop process technology for selected Natural Products and Organic Intermediates used in the manufacture of bulk drugs. His research work involved innovative studies on the Curcuminoids of Turmeric and a bone-fracture healing herbal extract.

Prof. Venkata Rao served on the Editorial Advisory Board of the Indian Journal of Pharmaceutical Sciences (IJPS) and reviewed articles submitted to IJPS very meticulously and rapidly. He published his research work regularly even after retirement. He published papers on the work he and his coworkers carried out at various research institutions. He wrote excellent research papers and was the recipient of two best paper awards of IJPS in the area of Pharmaceutical and Medicinal Chemistry and both of his papers were on Curcumin Chemistry I and II. These were published a few years apart, yet both were adjudged the best papers for those respective years. In addition he also served the Indian Pharmaceutical Association (IPA) in various capacities.