Drug-induced liver injury is caused by an array of prescription medications, as well as herbal and dietary supplements[1]. Consumers commonly believe that the traditional Chinese medicines (TCM) labeled as natural are always safe and of benefit to health. Therefore, their adverse events and toxicity are often ignored[2]. Documented data indicated that TCM has acute and/ or chronic effects on heart, kidney, lung and liver when over-dosage was administrated[3,4]. TCM-induced liver injury frequently develops in cases of excessive or inappropriate use. Usually, this kind of liver injury is self-limiting, but it sometimes leads to serious complications, such as liver cirrhosis, acute liver failure and even death, unless a liver transplantation is performed[5]. More and more attention has been paid to TCM-induced liver injury in recent years[4,6]. Oleanolic acid (OA, 3β-hydroxyolean-12-en-28-oic acid) is a ubiquitous pentacyclic triterpenoid in many plant species and medicinal herbs. Naturally, OA exists either as a free acid or as an aglycone precursor for triterpenoid saponins[7]. OA has been widely investigated for more than half a century and documented data demonstrated that OA and its derivatives possessed multiple pharmacological activities, such as anticancer[8,9], antidiabetic[10,11], antiinflammatory[12], antiviral[13], antioxidant, antiallergic and antimicrobial[14]. Especially, its hepatoprotective effect has been widely studied. OA has been found to protect liver damage and dysfunction. A study examined the effect of OA on acetaminophen (AA)-induced acute liver injury in mice and the mechanism of protection and reported that OA pretreatment resulted in an increased urinary excretion of AA-glucuronide and a decreased biliary excretion of AA-GSH. Based on this mechanism, OA decreased serum activities of alanine aminotransferase and sorbitol dehydrogenase and induced depletion in liver GSH content, thus protecting liver from injury[15]. Another study demonstrated for the first time that neonatal intake of OA attenuated the subsequent development of high fructose diet-induced non-alcoholic fatty liver disease (NAFLD) in rats by reducing hepatic lipid storage, terminal liver masses and hepatic histomorphological changes associated with NAFLD. They concluded that dietary supplementation with OA in the neonatal phase of development potentially programs for hepatoprotection against the development of NAFLD in adult life[16].

The prevalence of hepatitis in China is high. As early as in 1970s, OA has been approved and prescribed clinically for the adjunctive treatment of acute and chronic hepatitis. Though the hepatoprotective effect of OA has been well established, a recent study showed that repeated oral administration of OA induced cholestatic liver injury in mice[17] and OA altered bile acid homeostasis and produced cholestatic liver injury in C57 mice[18]. Thus, OA is effective in protecting against various hepatotoxicants at low dosages while higher dosages and long-term application could produce liver injury[19]. These observation provided evidence that OA could also be toxic to liver. Cell death is not only a fundamental cellular event during development, but also plays an important role in various kinds of pathological process. Hepatocyte, the main components of the liver is especially vulnerable to injury due to its central role in xenobiotic metabolism including drugs and alcohol[20]. Severe injury to hepatocyte is frequently accompanied by cell death, which is typically driven by apoptosis. However, necrotic cell death in hepatocytes is also common.

Cell viability was determined using the MTT assay. Briefly, cells were seeded in 96-well plates and treated with or without a series of concentrations of OA for 6 or 24 h. Then cells were cultured in MTT-containing DMEM medium (1 mg/ml) for another 4 h. Hundred microlitres of DMSO was added to each well and the absorbance at 570 nm was recorded using a FlexStation 3 Benchtop Multi-Mode Microplate Reader (Molecular Devices, Sunnyvale, CA). The intracellular ATP levels were measured using CellTiter-Glo™ luminescent cell viability assay (Promega) following the manufacturer’s instructions. Cells (1×105) were seeded in 12-well plates and treated with OA for 24 h. The morphological changes of cells were observed with IN Cell Analyzer 2000 (GE Healthcare, Little Chalfont, Buckinghamshire, UK). Firstly, the plate was equilibrated at room temperature for 30 min after OA treatment. Then CellTiter-Glo® Reagent equal to the volume of cell culture medium present in each well was added. The contents were mixed for 2 min on an orbital shaker to induce cell lysis. Finally, luminescence was recorded.

Effect of OA on apoptosis was determined using human Annexin V (PE)/7-AAD detection kit (BD Biosciences, San Jose, CA, USA) according to the manufacturer’s instructions. In brief, cells (2.5×105) were seeded in 6-well plates and culture for overnight. Then cells were treated with different concentrations of OA, and harvested at predetermined time periods. After incubating with binding buffer containing Annexin V/7-AAD for 15 min, the cell samples (at least 1×104 cells) were immediately analyzed by flow cytometry using a FACS Canto™ system (BD Biosciences). After treatment with OA treatment for 2 or 4 h, LO2 cells were stained with 2′,7′-dichlorofluorescindiacetate (DCFH2-DA, 10 μM) for 30 min at 37º. After washing twice with PBS, the fluorescence was analyzed immediately in a FACScan™ flow cytometer (BD Biosciences) using the FITC channel. At least 1×104 cells were collected in each sample. LO2 cells were treated with different concentrations of OA for 6 or 12 h followed by JC-1 staining (10 μg/ml) for 30 min at 37 in the dark. Fluorescence was observed with IN Cell Analyzer 2000.

LO2 cells were treated with OA for 6 h followed by incubation with DMEM containing Hoechst 33342 / PI (1:1000) solution for 10 min at room temperature and observed under a microscope. The significance of differences between groups was evaluated by twoway analysis of variance (ANOVA) using GraphPad Prism 6.0 (GraphPad Software, Inc., La Jolla, CA). The p value < 0.05 was considered statistically significant.

Figure 1: The cytotoxic effect of OA on LO2 cells LO2 cells were treated with OA for 24 h and A. cell viability was determined using MTT assay, B. intracellular ATP level was determined with a commercial kit and C. cell morphologies were captured by IN Cell Analyzer 2000. Data were presented as percent of control. **p<0.05 vs cells in control group. OA is oleanolic acid 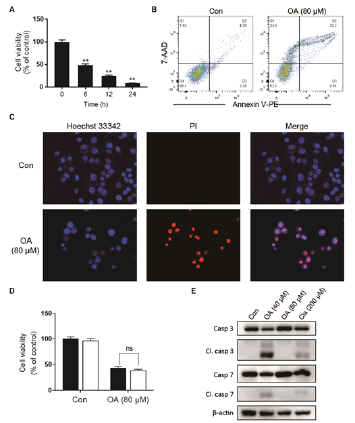 Figure 4: High concentration of OA induced LO2 cell death but not necroptosis A. Cells were treated with OA (80 μM) for 2 h and the protein expression was detected using Western blotting. B. LO2 cells were pretreated with Nec-1s (20 μM) and GSK’872 (5 μM) for 1 h followed by OA (80 μM) for 6 h and cell viability was measured with MTT assay. OA is oleanolic acid; Nec-1s is necrostatin-1s. (■) DMSO, 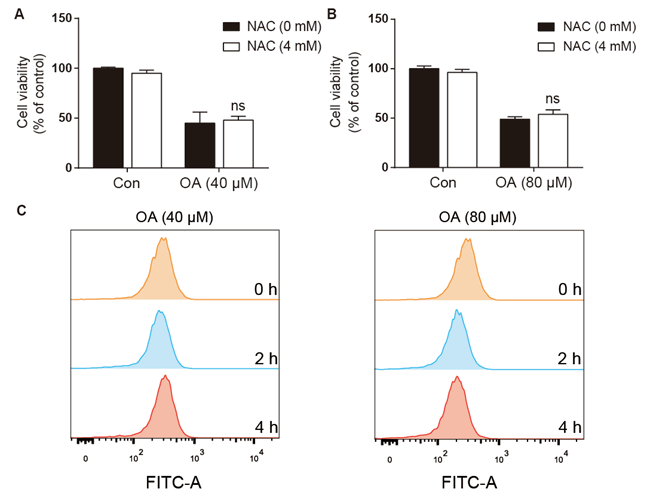 Figure 5: Effect of OA on intracellular ROS generation in LO2 cells A. LO2 cells were pretreated with NAC (4 mM) 1 h followed by OA (40 μM) for 24 h or OA (80 μM) for 6 h. Cell viability was measured using MTT assay. B. LO2 cells were treated with 40 and 80 μM OA for 2 and 4 h, respectively and intracellular ROS levels were determined by flow cytometry with the fluorescent probe DCFH2-DA. OA is oleanolic acid; ROS is reactive oxygen species. (■) NAC (0 mM), (□) NAC (4 mM)

The hepatoprotective effect of OA has been investigated for many years and OA has been widely used as adjuvant therapy for acute and chronic hepatitis. However, it was recently observed that high dosage and long duration of OA treatment could induce liver injury in experimental mice[17,18]. Furthermore, this paradoxical hepatotoxic effect occurs not only for OA, but also for other OA-type triterpenoids[19]. Thus, in the present study, the cytotoxic effect of OA on LO2 hepatocytes were determined. The main findings of this study were, low concentration of OA (40 μM) induced caspasedependent apoptosis while higher concentration of OA (80 μM) produced necrosis in LO2 cells. OA-induced cell death was ROS independent. OA has been reported to induce apoptosis in human hepatocellular carcinoma cells[21,22], non-small cell lung cancer cell lines[23], hypertrophic scar fibroblasts[24] and osteosarcoma cells[25]. In this investigation it was found that OA could decrease LO2 cell viability in a concentration-dependent manner. Annexin-V and 7AAD double staining showed that OA (40 μM) treatment induced apoptosis in LO2 cells. This was further confirmed by the cleavage of caspase 3/7/9 and decrease of MMP. Furthermore, OA-induced cell death was significantly reversed by Z-VAD-FMK, a pan-caspase inhibitor, suggesting that OA-induced cell death was caspase-dependent. Thus, these results showed that low concentration of OA induced caspase-dependent apoptosis in LO2 cells. Necrosis was generally considered as an unregulated type of cell death in response to external factors such as trauma or infection. However, recent studies revealed that necroptosis was a programmed necrosis mediated by RIP1, RIP3, and MLKL[26]. A series of natural products such as shikonin[27], 2-methoxy-6- acetyl-7-methyljuglone[28] have been reported to induce necroptosis in cancer cells. High concentration of OA induced necrotic morphologies. The penetration of PI into the cytoplasm suggested that the integration of cell membrane was disturbed. Furthermore, OA showed no effect on the cleavage of caspases and Z-VAD-FMK showed no effect on OA-induced cell death. These results suggested that OA produced nonapoptotic necrosis in LO2 cells. Although OA caused phosphorylation of RIP1 and RIP3, the inability of Nec-1s and GSK’872, the specific inhibitors of RIP1 and RIP3, respectively, suggested that OA-induced cell death was RIPs-independent. Collectively, these data revealed that OA caused non-apoptotic necrosis in LO2 cells. ROS has been implicated to play critical roles in OA-induced cell cycle arrest, apoptosis, and autophagic cell death in human pancreatic cancer cells[29], A549 lung cancer cells[30], and hepatocellular carcinoma cells[31]. However, in the current investigation it was observed that both concentrations of OA showed no effect on intracellular ROS generation. Furthermore, NAC, the ROS scavenger, failed to protect LO2 cells from OA-induced cell death. Thus, it seems that OA’s effects on LO2 cells were different from those in cancer cells, OA-induced apoptosis and necrosis was ROSindependent. In conclusion, OA, a hepatoprotective natural product, induced caspase-dependent apoptosis and necrosis in LO2 cells. These results suggested that clinical application of OA might injure hepatocytes and the dosages and duration should be tightly controlled in clinical practice.