Vigna angularis, also called adzuki beans, a member of the family Fabaceae, is an important food crop and used as folk medicines in Asian countries [2]. V. angularis have relatively small beans (about 5 mm). Most of the adzuki beans cultivated in Eastern Asian countries are red in color. This legume is rich in dietary fibers, proteins, minerals, vitamin A, vitamin B9 and folate [3]. Due to its biochemical components, V. angularis has been evaluated as a new treatment option. In addition, it has received considerable attention owing to the presence of polyphenols, such as proanthocyanidins and quercetin [4]. Numerous studies have demonstrated that polyphenols possess antioxidant [5,6], anticarcinogenic [7,8], antiglycation [9] and neuroprotective [10] properties. However, there are no data relating to optimized extraction conditions of total polyphenols (TPs) from V. angularis using response surface methodology (RSM), and there is little information about their antioxidant activities. RSM is a statistical technique, which includes the design of experiment, modeling, identifying optimal conditions, predicting the maximum response and an evaluation of interactions. It has been previously employed to optimize the extraction of phenolic compounds [11,12].

In this study, process parameters that affect UAE such as ethanol concentration, liquid-solid ratio, ultrasonciation time were optimized using RSM, by employing a Box-Behnken design (BBD), to maximize the yield of TPs from V. angularis. The antioxidant activities of the TPs were investigated by measuring 1,1-diphenyl-2- picrylhydrazyl (DPPH) radical, hydroxyl radical and superoxide radical scavenging.

Dried adzuki beans were ground and sifted through a 0.75 mm sieve. An ultrasonic cleaner (KQ-250V, Kunshan Ultrasonic Instruments Co., Ltd, Kunshan, China) was used for the preparation of TPs. V. angularis powder (6.0 g) was mixed with solvent in a conical flask and sonicated (frequency 50 kHz, power 100 W and temperature of 25°) under different extraction conditions. Changes to only a single-factor were performed in a series of experiments, where the ethanol concentration ranged from 20-80%，liquidsolid ratio ranged from 5:1 to 40:1, the ultrasonic time ranged from 20-60 min and the number of extractions ranged from 1 to 5. In the optimization experiments, the experimental variable settings were based on the BBD results with a three-factor, three-level system, which resulted in an experimental design of 15 experimental points, including three central points. The three independent variables were coded at three levels (-1, 0, +1), 0 was central point, and the high and low levels of the factors are coded as +1 and -1, respectively. At the end of the ultrasonic time, the extract solution was centrifuged (10 min, 3000 rpm), filtered and analyzed for TPs content by UV/Vis spectrophotometry (model 2100, Labtech, USA).

The TP content in the extracts was determined using Folin-Ciocalteu colorimetry as described previously [13]. In each replicate, 1 ml of the diluted extract solution, 1 ml of Folin-Ciocalteu reagent and 20 ml of 20% Na2CO3 were mixed together and vortexed. The mixture was diluted to 50 ml with distilled water and then incubated for 30 min in the dark at room temperature. After incubation the absorbance of the mixture against the blank solution was measured at 760 nm. Gallic acid solutions in methanol (20, 40, 60, 80, 100, 200 μg/ml) were used as standards, and were treated in a similar manner to the samples. A standard curve was conducted, resulting in the following regression Eqn., A=0.0036C+0.0084 (r=0.9992), with good linearity in the range of 20-200 μg/ml. The TP content of the sample was expressed as gallic acid equivalent (mg/g dry weight).

TPs were prepared on the basis of the optimal level and were diluted to different concentrations (0.15, 0.2, 0.4, 0.6, 0.8 and 1 mg/ml). DPPH radical scavenging activity was tested following a previously published protocol [14,15]. Briefly, 2 ml of 0.2 mM DPPH was mixed with 2 ml of extract solution at different concentrations. The reaction mixture was vortexed thoroughly and incubated in the dark at room temperature for 30 min. The absorbance of the mixture was measured spectrophotometrically at 517 nm. Ascorbic acid was used as positive control. percent DPPH radical scavenging activity was calculated with the following Eqn., DPPH radical scavenging activity (%)= [(A0 - A1)/A0]×100, where A0 is the absorbance of the control, and A1 is the absorbance of sample.

All the experiments were performed in triplicate, and the data were expressed as the mean±SD (standard deviation). Optimal extraction conditions were determined by RSM, which was performed using the Design-Expert Version 9.0.2 software (Stat-Ease, Inc., Minneapolis, MN). Experimental data were analyzed using variance (ANOVA) and the adequacy of the model was determined by evaluating the lack of fit, coefficient of regression (R2) and the Fisher test value (F-value). The level of significance of the model and model variables was set at P<0.05. The contour plots and response surfaces were drawn using Design-Expert 9.0.2. Then, the maximum was predicted by analysis for the response surfaces.

Single-factor experiments are defined as experiments where there is a change in only one factor at a time, while the other factors are fixed when performing an experiment. These experiments can help to determine reasonable factors and levels in the design of future experiments. In this study, the effects on the extraction of TPs were investigated.

Fig. 1 illustrated the effect of ethanol concentration, liquid-solid ratio, ultrasonic time and extraction times on the yield of TPs. TPs were extracted with water and different concentrations of ethanol (20, 40, 60 and 80%). The optimal ethanol concentration for obtaining extracts was 40% in all the samples tested, therefore, ethanol concentrations between 20 and 60% were investigated in RSM. In fact, ethanol concentration was found to be the dominant factor in maximizing TP extraction. Solvent volume also had a significant effect on the extraction efficiency [18,19]. The ratio of liquid to solid was changed from 5:1 to 40:1 during the experiments and it was found that the extraction yield of TPs rose as the ratio of liquid to solid was increased, reaching a maximum (3.66 mg/g) when the ratio was 20:1. However, there were few changes when the ratio increased further. For this reason, ratios of 10:1, 20:1, 30:1 were all found to give high yields of TPs. Different ultrasonic treatment time (20, 30, 40, 50, 60 min) was also used in the experiment. The TP extraction yield increased gradually up to 40 min of treatment, but after 40 min, there was no difference in yield. These results were expected since an increase in ultrasonic time enhances the solubility of phenolic compounds, but longer ultrasonic times might also have increased the resolution ratio of the compounds resulting in a stable yield [20]. Therefore, in the optimization process, 30, 40, 50 min were chosen as the level of extraction time. The influence of multiple extraction rounds (1, 2, 3, 4 and 5) on the yield of TPs was also tested. The extraction yield of TPs increased gradually as the number of extraction rounds increased, with TPs yields of 3.71 mg/g after the third extraction, 3.73 mg/g after the fourth extraction and 3.69 mg/g after the fifth extraction. Therefore, three rounds of extraction were chosen as the best options as it took into account the costs and benefits. The number of extraction rounds was a discontinuous value and was not an examined factor in RSM, so was fixed at 3 rounds in the response surface experiments. 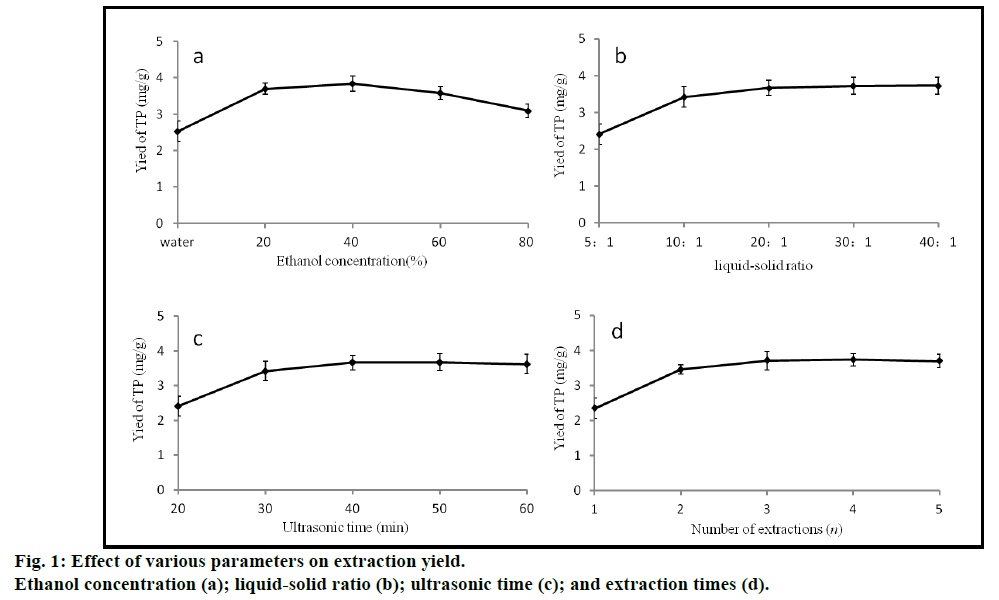 A lack of fit with P>0.05 (P=0.0804) was not statistically significant, which showed that the model fitted well with the experimental data. The R2 of 0.8138 is in reasonable agreement with the Adj R2 of 0.9658 i.e. the difference is less than 0.2. Therefore, this experimental model was adequate and reproducible for predicting the TPs yield. Contour plots and response surfaces were shown in fig. 2. TPs content increased with increased ethanol concentration and the ultrasonication time, and the interaction between the two factors was significant (P<0.05). However, interactions between the other factors were not significant, and this was in agreement with the ANOVA results. The RSM guided optimization demonstrated that the optimum extraction conditions for maximizing TPs yield were 44.3% (ethanol concentration), 21.6:1 (liquid-solid ratio) and 30 min (ultrasonication time). A verification test was performed on the basis of this optimal level, and the observed responses Y=4.16 (mg/g) agreed well with the predicted response (4.19 mg/g), and the relative standard deviation (RSD) of Y was 3.5%. The predicted values and test data of the optimized formulation showed a good correlation. 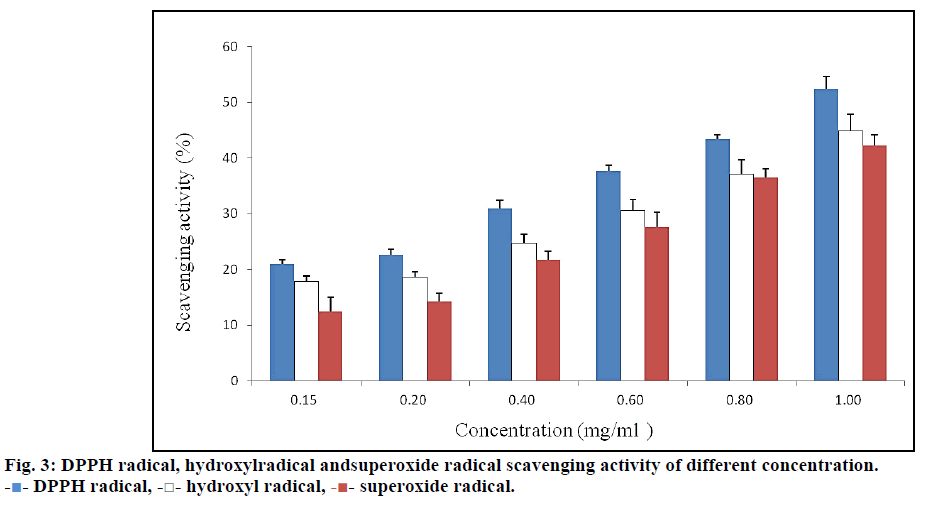 Considering the results, V. angularis extracts showed potent antioxidant activity. The antioxidant function of these extracts is associated with polyphenols. The radical scavenging properties of polyphenols are thought to be due to their hydroxyl groups that possess hydrogen donating ability [24]. Therefore, TPs of V. angularis can be considered as potential radical scavengers.

In this study, TPs have been successfully prepared from V. angularis using UAE, and the extraction conditions were optimized using a single-factor experiment approach coupled with BBD. The three factors investigated in this study could be ranked as follows in terms of influence on extraction performance: liquidsolid ratio>ethanol concentration>ultrasonic time. The results demonstrated that a combined treatment of 44.3% (ethanol concentration), 21.6:1 (liquidsolid ratio), 30 min (ultrasonic time) and three rounds of extraction were optimal for maximizing the TP yield. On the basis of these optimal conditions, the predicted response was 4.19 mg/g. The prediction models developed here showed good correlation with the experimental data at the 95% confidence level. Extraction is the first step for the production of polyphenols, and the results presented here are useful for the further utilization of V. angularis. This study has also provided a reference point for the extraction of polyphenols from other herbal medicines that are rich in phenolic compounds. TPs from in V. angularis showed strong antioxidant activity against DPPH radicals, hydroxyl radicals and superoxide radicals. V. angularis is a natural plant resource and could serve as a source of high-value antioxidants or nutraceuticals.