To provide a potential method for improving microalgal lipid production, an over expression vector that expresses lysophosphatidic acid acyltransferase gene in Phaeodactylum tricornutum was constructed. Total fatty acid production incresed significantly in over-expression transformants and the length of fatty acids ranged from C14 to C22. The response to both lysophosphatidic acid acyltransferase over- and under-expression over the growth phase was also characterized. This study indicated a potential method to increase fatty acids accumulation in microalgae by employing a metabolic engineering approach.

The irreversible depletion of fossil fuels and fossil fuel burning-associated global warming have accelerated the search for biofuel production via renewable feedstock over the past few years[1,2]. Due to some obvious advantages which include higher photosynthetic efficiency and biomass production rate, microalgal lipid, especially triacylglycerols (TAGs), have broadly been researched as a hidden biodiesel raw material[3]. In order to cope with environmental stress situations such as nutrient deprivation, changes in salinity, pH variation and increased temperature, photosynthetic microalgae can accumulate high concentrations of storage lipids in the form of droplets. Nutrient deprivation, especially nitrogen depletion is the most commonly used method to trigger lipid storage in oleaginous algae[4]. Microalgae can change the lipid metabolism to the synthesis and storage of neutral or storage lipids to overcome these adverse situations via the fatty acid (FA) assembly pathway. After the synthesis of FAs in the plastid these are exported to the cytosol to enter the triacylglycerol assembly pathway or the Kennedy pathway[5]. The Kennedy pathway is the most understood pathway for TAG assembly from FA and involves stepwise acylation of each hydroxyl group of glycerol which is fairly straight forward. TAGs were produced by the course of the acyl-CoA being incorporated into glycerol-3-phosphate and the reaction process requires the participation of a series of key enzymes, such as glycerol-3-phosphate acyltransferase (GPAT), lysophosphatidic acid acyltransferase (LPAAT), phosphatidic acid phosphatase (PAP) and diacylglycerol acyltransferase (DGAT)[6]. LPAAT is one of the most critical acyltransferases of the FA biosynthesis pathway[7]. In Chlamydomonas reinhardtii, it was shown that LPAAT expression was markedly up-regulated in neutral lipid accumulation phase and knock down mutants of LPAAT gene showed reduced accumulation of neutral lipids[8]. Also, simultaneous heterologous expression of glyceraldehyde-3- phosphate dehydrogenase (G3PDH), GPAT, LPAAT and DGAT, which were cloned from the yeast strains, Saccharomyces cerevisiae and Yarrowia lipolytica in Chlorella minutissima UTEX 2219, improved the lipid content of the algae 3 fold and lipid productivity was increased by 1.5 fold[9]. Thus, LPAAT is a potential target protein to enhance TAG accumulation and productivity in algae. Genetic engineering techniques have been previously used to microalgae to increase lipid accumulation or understand lipid accumulation under stress conditions[10-12]. Genetic transformation is a promising strategy for further improving microalgal lipid production[13].

Among the photosynthetic microalgae, diatoms are eukaryotic phytoplanktons that contribute significantly to oceanic primary productivity and CO2 fixation and has great potential for autotrophic production of biomass[14]. Phaeodactylum tricornutum (P. tricornutum), the model organism of choice for diatoms, is ideal for biodiesel production due to its ease of cultivation, short biomass doubling time, smaller genome size, sequenced genome information, and availability of molecular tools for genetic engineering[15]. Also, P. tricornutum is capable of synthesizing neutral lipids under unfavorable conditions, mainly in the form of TAGs, which accumulate in the late exponential phase[16]. Storage lipids can constitute at least 20-30 % of the dry cell weight of P. tricornutum under standard culture conditions[17]. Literature showed that P. tricornutum was able to be easily genetically transformed[18] and several functional genomics methods such as gene silencing[19] and genome editing[20] have been previously developed. Although tools for genetic modification currently exist for some diatom species[21], these are slightly inefficient compared to the efficient methods used in the model microbials such as E. coli and yeast, which has counteracted both basic diatom research and applied strain development[22]. Moreover, for lipid accumulation in P. tricornutum, the influence of the expression of LPAAT gene on lipid content and FA composition remain poorly understood. Thus, in this study, the effect of over expression and knock down of LPAAT gene in P. tricornutum was studied in relation to TAG synthesis and accumulation and was compared to the wild type.

P. tricornutum FACHB-863, was purchased from the Institute of Hydrobiology, Chinese Academy of Science. P. tricornutum was maintained in f/2 solidified medium containing 1.5 % (w/v) agarose. The salinity of the f/2 culture medium was 35. P. tricornutum was cultured in 250 ml flask with 100 ml medium and was under the condition of 12 h:12 h light and dark cycle, a light density of 60 μm2/s and 20°. Initial pH of the culture medium was controlled at approximately 7.5. The inoculation size was controlled at 5.0×104 cell/ ml. Microalgal samples were collected daily and the cell concentrations were determined using a haemocytometer. Transformants of the wild type strain with LPAAT gene were selected using the herbicide glufosinate at a concentration of 100 μg/ml. E. coli top10 strain was used as a host for recombinant vector construction and plasmid isolation. E. coli strain was generally cultivated in Luria-Bertani (LB) medium at 37° and the shaking speed of 180 rpm. When isolating recombinant strains, ampicillin was used at a concentration of 100 μg/ml.

The genomic cDNA of P. tricornutum was extracted using tissue DNA Kit (Omega, Shanghai, China) and used as the template of polymerase chain reaction (PCR). Then, the LPAAT gene was cloned with the followed amplification condition, 35 cycles of 20 sec denaturation at 94º, annealing for 30 s at 60° and extension for 30 at 72°. The primer pairs used for amplification are given in Table 1. The cloning vector was pMD18-T was isolated from E. coli Top 10. The obtained plasmidpMD18-LPAAT and pfcpA-MCS/fcpB-Barwere digested with BamH I and Hind III at the position of Nco І. The positive clones after screened by LB medium supplemented with 100 μgmL-1ampicillinwere identified by PCR amplification. Digested products were ligated by T4 DNA Ligase and constructed the over-expression vector Lpaat-pfcpA-MCS/fcpB-Bar and antisense-expression vector antisense-Lpaat-pfcpA-MCS /fcpB-Bar.

The microalgal cells of P. tricornutum were collected after 7 d of cultivation in the mid-exponential phase and were counted with a hemocytometer. The microalgal cell concentration of P. tricornutum was optimized to be below 108 cells/ml on the f/2 agar media, the microalgal cells of P. tricornutum were put on the 47-mm diameter cellulose acetate membrane filter (Sartorius Stedim Biotech, Germany) and were bombarded for one time[23]. Particle bombardment transformation was carried out by using the Biolistic PDS-1000/He Particle Delivery System (Bio-Rad Laboratories, Inc., Hercules, CA, USA). The plasmid was linearized by Nco I, and was purified, and was adjusted the concentration to 1 μg/μl by ethanol precipitation. The linearized and concentrated recombinant vectors were coated onto gold particles at 0.6 μm (Bio-Rad, USA)[24]. Five micrograms of purified DNA, 50 μl CaCl2 (2.5 M) and 20 μl spermidine (0.1 M) were completely mixed to 3 mg of 0.6 μm gold particles resuspended in 50 % glycerol. The prepared DNA particles were rinsed with 70 % ethanol, dissolved in 100 μl of 100 % ethanol. After bombardment, the microalgal cells were immediately cultivated in f/2 medium and cultivated at a low light density of 60 μmol/m2s for 8 h. Then coating 100 μl liquid microalga on a solid medium plate and incubated for 1 month.

The RNAiso Plus kit for total RNA (Takara Dalian, China) was used to isolate total cellular RNA and the contaminating genomic DNA of which was removed by treating with DNase I. DNA-free RNA was reverse transcribed using SuperScript™ First-Strand (Takara Dalian) in a final volume of 20 μl. The cDNA was dissolved in nuclease-free water and frozen at -20°. Primers were designed to quantify the glufosinate resistance gene (bar) using Primer 5.0. Primers information including sequence and PCR product size are summarized in Table 2. Quantitative PCR was performed in a 50 μl final volume using SYBR Premix Ex TaqTM. The cDNA synthesis was performed with the reverse primer used for genomic PCR with 1 mL RNaseOUT, and the parameter of which was 1 h at 55°, terminated at 75° for 15 min. To reduce the hazard of RNA degradation, all the steps from RNA isolation to cDNA synthesis should be ended in 24 h. PCR amplification was run on PikoReal™ Real-Time PCR System (Thermo Fisher USA) using 96-well optical plates under the following conditions, 6 min at 94°, 30 cycles, 94° for 1 min, 60° for 30 s, 72° for 1 min, and 72° for 10 min[25]. RNA quality was assessed on a 2 % agarose gel.

The FAs present in the sample were transformed to fatty acid methyl ester (FAME) to increase the volatility of the sample and clear chromatographic analysis. Therefore, approximately 15 mg lyophilized microalgal biomass was suspended in 1 ml methanol for esterification. During detection, 500 μg/ml C19 as an internal standard for esterification and added to the mixture prior to reaction for 15 min. After completely drying, the pellet was resuspended in 1 ml pf 4 M hydrochloric acid in methanol. In order to saponify the acyl group in the lipid and convert it to FAME, the sample tube was incubated at 100° for 1 h and then the obtained FAME was recovered using n-hexane. The FAME residue contained in the hexane phase recovered by evaporation was reextracted using 100 μl of n-hexane. To measure the concentrations of FAME, the hexane solution was subjected to gas chromatography equipped with a flame-ionization detector (Agilent Technologies 7890 A). The column of VF-23 ms (30.0 m×320 μm×0.25 μm) was employed with the following temperatures, 70° for 4 min, then increased to 195° at a rate of 25°/min and further increased to 205° at a rate of 3°/min, and finally the temperature was increased to 250°.

The microalgal biomass of over-expression and antisense-expression transgenic microalgae at plateau phase was collected for detecting the content of FAs via confocal laser scanning microscope (CLSM). microalgal sample (790 μl) was stained with 10 μl Nile red and 200 μl dimethyl sulfoxide (DMSO) for 6 min.

The purpose of this research was to use the genomic technology to create and characterize transgenic marine diatoms for production of useful biofuel FA. The strategy employed was to create two strains of P. tricornutum, one overexpressing and one under expressing the LPAAT via an antisense construct.

The transformed P. tricornutum FACHB-863 were screened by growing in the presence of the herbicide glufosinate, for which there is a resistance gene on the plasmid. Monoclonal transformants grew in about a month. The selected transformants were cultivated on solid medium containing herbicides, the microalgal cells that resisted the herbicide successfully were cultivated with f/2 medium. Then, microbial genomic DNA was subsequently extracted and dyes with fluorescent dyes for evaluating and quantifying the over-expression and antisense-expression transformants by detecting the strength of fluorescent signal (figure 1). LPAAT gene in the transformant was approximately 240 % compared to wild type microalgae and the antisense-expression transformant had 35 % lower expression compared the wild type microalgae with the relative expression quantity of 65 % (figure 1). 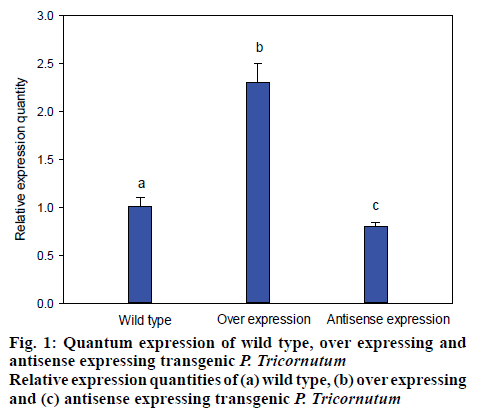 The FA contents of the transgenic microalgal cells were measured using the esterification method that can saponify the acyl groups and convert into FAME. The FAMEs were detected by GC-MS and results are shown as Table 3. During the lag phase, the total accumulated lipid of LPAAT-overexpressing P. tricornutum FACHB-863 was 248.7 mg/g dry microalgal biomass. This was 85.9 % higher than the result of wild type microalgae (133.8 mg/g). For the antisense-expression microalgae, the total lipid was significantly decreased to 34.7 mg/g with a decrease of 74.1 %. At the early plateau phase, the total lipid content of wild type, overexpression, and antisense-expression microalgae were 214.8, 267.3 (24.4 % increased), and 140.8 mg g-1 (34.5 % decreased), respectively. At the late plateau phase, the total lipid increased was 40.5 % over expression (365.5 mg/g) and decreased 91.5 % (22.2 mg/g dry weight) under antisense expression. 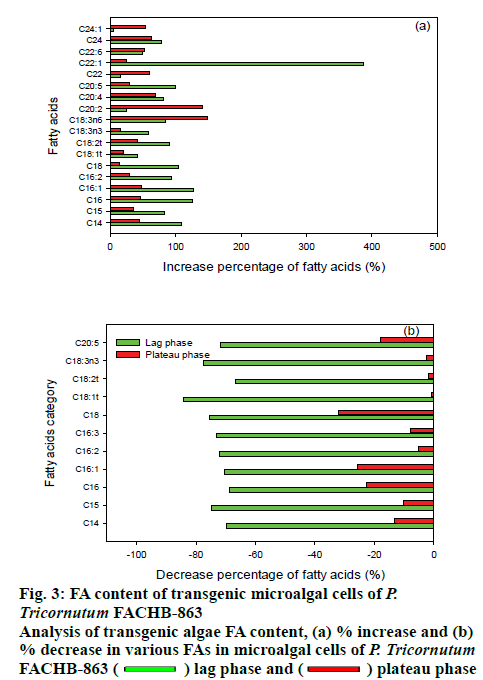 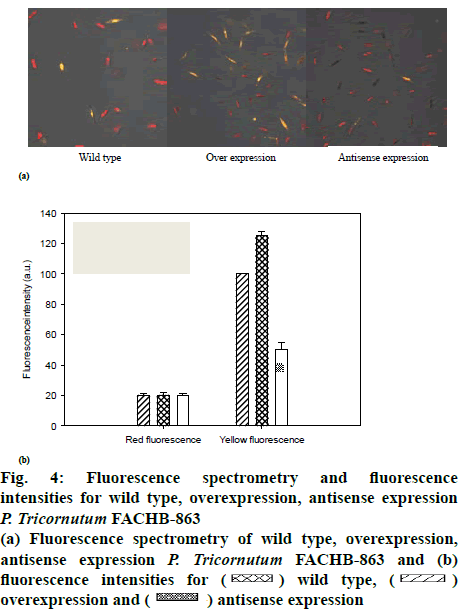