The present study was taken up to standardize the stem of Aralia racemosa L. for quality, purity and sample identification. Various standardization parameters like morphological, microscopical and physicochemical evaluations, preliminary phytochemical screening and fluorescence analysis of the stem of A. racemosa were done and qualitative parameters were reported. Macro and microscopic evaluation studies were performed as per the routine laboratory procedures. Phytochemical, physicochemical, florescence analysis, behaviour of powdered drug have been conducted as per the World Health Organization guidelines. Microscopy of stem revealed the presence of phellem, phellogen, phelloderm, medullary rays usually bi-serrate and powder analysis showed the presence of cork cells, lignified xylem vessels, xylem fibers and parenchyma cells. Phytochemical analysis showed the presence of saponins, flavonoids, tannins, phenols, glycosides and volatile oil. Physicochemical parameters such as moisture content, ash value, extractive value and fluorescent behaviour of stem powder were determined. These parameters are useful tools to differentiate the powdered drug material. The findings of this study will be helpful in the identificat0ion of A. racemosa stem.

In accordance with World Health Organization (WHO); traditional medicines are utilized by 70-95% of worldwide population especially in developing countries with regard to their healthcare. Additionally, the usage of herbal drugs has grown incredibly in line with the worldwide trend of folks returning to natural remedies. The increasing utilization of botanicals by the public is forcing moves to evaluate the health claims of these agents and also to establish specifications of quality and manufacture [1].

Herbal drugs exert a key impact in health care programs particularly in developing nations. However hindrance behind the acceptance of herbal medicine in developed nations is the lack of documentation, stringent quality control measures. Therefore, documentation and standardization of the crude materials utilized in herbal medicine is vital for the global compliance of this system of medicine. In this regard, WHO supports the nations to provide conventional remedies and practices in communal and private health services. Construction of monographs are planned fundamentally to promote harmonization in the utilization of herbal drugs with respect to levels of safety, efficacy, and quality control. Pharmacognostic standardization, physicochemical investigation and preliminary phytochemical studies were all over accepted in recognizable proof and confirmation of the genuine plant materials. Standardization of herbal drugs is the strategy of recommending a set of specifications, constant parameters, definitive qualitative and quantitative values, which bring an assurance of quality, efficiency, safety as well as reproducibility. Proper identification and quality assurance of plant materials are essential to ensure reproducible result of herbal medicines, which will add to its safety and efficacy. Pharmacognostic standardization of plant material comprises of its morphological, anatomical and biochemical characteristics [2].

Araliaceae is an extensive family consisting of 50 genera and 1412 species. The plants of this family have a significant contribution in the treatment of respiratory inflammation, diabetes, cancer and parasitic infections [3]. The genus Aralia of Araliaceae contains up to 71 species of plants scattered over Asia, North America and South America, a few examples of these species are Aralia armata, A. bipinnata, A. chinensis, A. continentalis, A. cordata, A. dasyphylla, A. echinocaulis, A. elata, A. fargensii and A. nudicaulis. A. racemosa, a perennial herb in this family is distributed in America, Africa, Australia, New Zealand and Pacific Islands [4]. The genus Aralia is very closely related to the genus Panax, which consists of Asian and American ginseng (Panax ginseng and P. quinquefolius). Various plants in the genus Aralia are utilized medicinally for different disorders. There are actually hundreds of patents associated to medicinal products that contain plants of genus Aralia [3].

Stem of A. racemosa was shade dried and powdered using an electric mixer-grinder and sieved through sieve no. 22 with an average aperture size of 710 μm. Then coarsely powdered leaves were macerated with solvents in the increasing order of polarity, chloroform, methanol and water. After 24 h, the extracts were filtered through a Whatman filter paper and concentrated in a rotary evaporator followed by removal of the residual moisture in a desiccator.

Macroscopic characteristics of the plant were analysed by WHO quality control methods of herbal medicine [12]. Stem were cut into thin sections manually with the sharp cutting edge of a blade using the free hand. The sections were then transferred to slides, cleared by warming with chloral hydrate to remove chlorophyll, stained with phloroglucinol and concentrated HCl to detect the lignified tissues and mounted in glycerin. Powder microscopy was performed according to the method of Khandelwal [13]. The photomicrographs of different magnifications were taken with Olympus CX-21i triocular microscope under illumination of a halogen lamp.

Physicochemical parameters such as ash value, moisture content and extractive values were determined according to the procedures mentioned in WHO quality control methods for herbal materials as follows.

Determination of loss on drying:

About 10 g of powdered drug (without preliminary drying) was weighed and placed in a tared evaporating dish and dried at 105°. The drying and weighing were being carried out at 1 h intervals till the variance between two successive weighing’s had not been more than 0.25%. A consistent weight was supposed to have reached when two successive weighing after drying for 30 min and cooling for 30 min in a desiccator, showed not more than 0.01 g difference [14,15].

About 2.0 g of the powdered drug was weighed accurately and incinerated in a silica crucible at a temperature not exceeding 450° until free from carbon. The resulting ash was cooled and weighed. The process was repeated to obtain a constant weight. The percent of total ash with reference to the air-dried drug was calculated [14,15].

The ash was obtained according to the method defined above, boiled for 5 min with 25 ml of water, filtered and the insoluble matter was collected on an ash less filter paper. It was additionally washed with hot water and inflamed for about 15 min at a temperature not exceeding 450° and weighed. The difference in weight of inflamed and total ash represented the water-soluble ash. The percent water soluble ash was determined with reference to the air-dried drug [14,15].

Ash was obtained according to the method described above, boiled for 5 min with 25 ml of 2 M hydrochloric acid, filtered and insoluble matter was collected on an ash less filter paper. It was further washed with hot water and ignited for 15 min at a temperature not exceeding 450° and weighed. The percent acid insoluble ash was calculated with reference to the air-dried drug [14,15].

Four grams of the air-dried coarsely powdered drug was macerated with 100 ml of water in a closed flask for 24 h, shaken repeatedly during first 6 h and then allowed to stand for 18 h. It was filtered; 25 ml of filtrate was evaporated in a flat shallow dish, dried at 105° and weighed. Percent water-soluble extractive value was calculated with reference to air-dried drug [14,15].

Four grams of the air-dried coarsely powdered drug was macerated with 100 ml of ethanol in a closed flask for 24 h, shaken frequently during first 6 h and allowed to stand for 18 h. Then it was filtered, during filtration precaution was taken against loss of methanol; 25 ml of filtrate was evaporated in a flat shallow dish and dried at 105° and weighed. Percent methanol soluble extractive value was calculated with reference to airdried drug [14,15].

Fluorescence analysis of the powdered drug:

The fluorescence examination of the powdered leaves was done by placing dry powdered leaves on a slide and observed by treating with a few drops of different chemical reagents to detect the colour changes under UV/Vis light [21,22].

The stem of A. racemosa has greyish white ting. The outer stem is greyish white with yellow white inside, stem has aromatic odour and acrid in taste. The transverse section of stem of A. racemosa showed the presence of periderm, cortex, phloem and xylem. Periderm shows the presence of tangentially elongated cork (phellem), which is non-lignified in nature, followed by phellogen, which are non-living rectangular cells made up of cellulose. The inner most layer is phelloderm, which are square shaped cells composed of cellulose and living in nature. All these layers collectively called as periderm as shown in Figure1. The cortex region is composed of parenchymatous cells, with small intercellular spaces, which is multi-layered with 10-15 layers. The phloem is sandwiched between two medullary rays as shown in Figure2. The medullary rays are parenchymatous in nature, which are mono- to tri-serrate, but mostly biserrate. The phloem also shows the presence of phloem parenchyma and sieve tubes. Xylem is surrounded by bi-serrate lignified medullary rays as shown in Figure3. Xylem also comprises of xylem fibres, xylem vessels and xylem parenchyma. Beneath the xylem is pith or medulla as shown in Figure4. Powder microscopy of stem of A. racemosa revealed the presence of cork cells, parenchyma cells, lignified xylem fibres and xylem vessels as showed in Figure5. 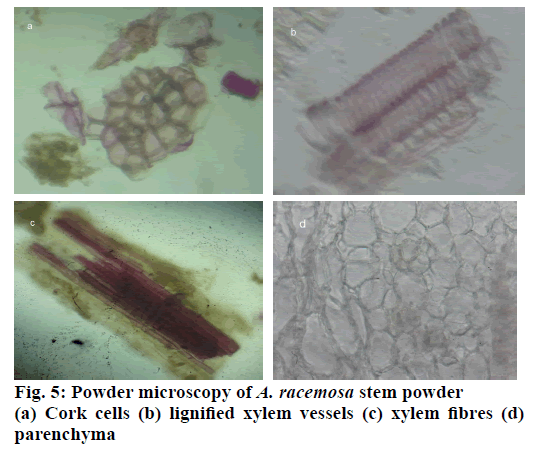 Indian systems of medicine utilize most of the crude drugs, which are of plant origin. It can be crucial that specifications need to be set down to control as well as check the identity of the plant and examine its quality prior its utilization. A detailed pharmacognostic assessment therefore is extremely an important prerequisite. In accordance with WHO, the macroscopic and microscopic description of a medicinal plant is the primitive step in the direction of establishing its identity and purity and need to be performed prior to any tests tend to be carried out [21-23].

A. racemosa, traditionally utilized in conventional medicines has incredible therapeutically potential due to its multifaceted biological functions. Microscopy is one of the straight forward and modest strategies to begin with setting up the correct identity of the source materials. The prominent diagnostic features of stem were cork cells, lignified xylem vessels, parenchyma, medullary rays and xylem fibres. These characteristics could be utilized for standardization of drugs and also useful for preparation of plant monographs. Ash values have been widely used to establish quality and purity of crude drugs. This is indicative of the presence of various impurities such as carbonate, oxalate and silicate. The water soluble ash is employed to estimate the amount of inorganic compound found in drugs. The acid insoluble ash consisted chiefly of silica and indicated contamination with earthy substances. The moisture content of a crude drug ought to be minimized with a specific goal to avoid decomposition of crude drugs either due to chemical changes or microbial contamination. The crude drugs exert pharmacological activities principally because of active chemical constituents present. These constituents might be soluble in various polar, semi polar or nonpolar solvents. Total soluble constituents of the crude drug in a specific solvent or mixture of solvents constitute the extractive value. These extractive values are expected to give a measure of the chemical constituents present. The percent active chemical constituents in any crude drug are expressed on air-dried basis. Thus the fluorescence analysis and behaviour of powdered drug with different chemical reagents are extremely fast techniques to distinguish from suspicious specimens. In case of absence of physicochemical assessment, such techniques are critical to check the adulteration. This approach of standardization absolutely gives scientific validation of crude drugs [21-23]. Here, preliminary phytochemical examination of the stem revealed the presence of saponins, flavonoids, tannins, phenols, glycosides and volatile oils.

Since there has been no reports documenting the pharmacognostical work on this traditionally significant crude drug, the current investigation had been taken up with a view to lay down standards, that could be helpful for identification of sample quality, purity, authentication and also compendium of quality control of crude drugs [21-23].

Authors declare no conflict of interests.