The plasma concentration time profiles for nicotine were characterized after a single application of nicotine transdermal system to the upper fore arm of healthy smokers. A 12 cm2 system was applied for 24 h. Blood samples were withdrawn at predetermined time intervals. Plasma nicotine concentrations rose rapidly and achieved a mean Cmax value of 14.5 ng/ml .The half life was estimated as 4.78 h and AUC(0-24)181.0 ng.h/ ml. The nicotine transdermal system was well tolerated. The results indicate that the system has potential usefulness in smoking cessation. The pharmacokinetic profiles of marketed patch system was compared with the developed system. Significant difference was observed in the pharmacokinetic parameters.

Nicotine Transdermal Systems (NTS) are widely available in the western countries and significant advances have been made in this field. NTS are reported to be well tolerated in clinical trials because of their ease of use and unobstrusive nature resulting in better patient compliance. NTS have also been reported to reduce daily cigarette use in subjects who are unable to totally abstain from smoking.

Several forms of nicotine replacement therapy are available in the market. However, difference in the amount and pattern of nicotine delivery from patches may confer clinical advantages and disadvantages to individual patch users as cigarette users also vary in the amount and pattern of nicotine obtained from smoking. There are many reviews reporting the pharmacokinetics of nicotine transdermal systems. These reviews report differences between the systems in terms of both amount of nicotine delivered, as well as rate of delivery; however, the data reported were taken from studies of individual systems [1].The current study compared the pharmacokinetic profiles of marketed patch system with the developed system. The developed system was loaded with 40 mg of nicotine and bore a rate controlling membrane. The system was designed to deliver nicotine over a 12 cm2 area at a controlled rate of 95 μg/cm2/h2.

The study was conducted in six healthy south Indian adult male smokers. The study was open and conducted in age group between 25-40 y and weighing 50-60 kg. Subjects were confirmed to be in good health by physical examination, medical history and routine clinical tests. Exclusion criteria were any illness or medication use and drug or alcohol abuse. Written consent was obtained from each subject. The study was approved by Hospital Ethical Committee, of Approval number No.KH/26-12/2002. The volunteers received written information about the aim of the study and informed consent was obtained from each of them. Each subject was required to abstain from smoking one day before the study. Subjects were restricted to the ward during the study period and were closely supervised at all times to insure that they did not smoke. Alcohol, caffeine and xanthine containing beverages were not permitted during the confinement period of the study.

A 12 cm2 nicotine transdermal patch was applied to the clean, dry, non hairy skin on the forearm. The volunteers were checked periodically to ensure that the patches remained undisturbed, and monitored for adverse effects. Blood samples (3 ml) were withdrawn from a cubital forearm vein via an indwelling butterfly catheter at time intervals of 0, 1, 2, 4, 6, 8, 10, 12, 18 and 24 h after application of the patch. Blood samples were collected in heparinised tubes, centrifuged and plasma was separated by centrifugation and frozen till further analysis. The nicotine concentration in plasma was quantitatively determined by HPLC [3] . Pharmacokinetic parameters were calculated using PK Solution 2.0 software supplied by Summit Research Services Montrose, USA, which is based on non compartmental pharmacokinetic analysis.

The NTS used had a surface area of 12 cm2 and released approximately 27 mg of nicotine over a 24 h wearing period. It bears a rate-controlling membrane that regulates the release of nicotine to and through the skin [2]. All subjects successfully completed the study without any adverse effects. One subject experienced mild erythema at the application site of the transdermal system during the initial stages of the study which lasted for one hour. Mean plasma concentrations of nicotine during application of the formulated transdermal system are illustrated graphically in fig. 1. 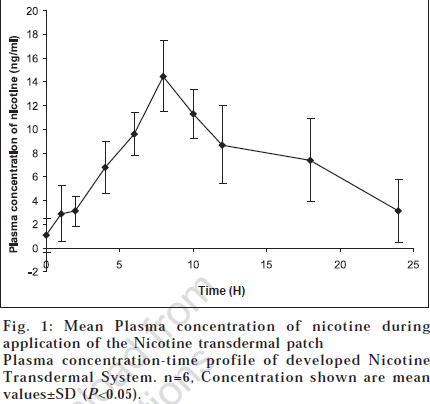 Trace amounts of nicotine were present in the plasma before system application (1.04±0.26 ng/ml). These concentrations may be due to consumption of nicotine containing beverages like tea or chewing tobacco, even though it was restricted 12 h prior to the study. Nicotine levels gradually increased and achieved a mean Cmax value of 14.5 ng/ml at a median tmax of 8 h. The t1/2 was 4.78 h and AUC(0-24) 181.0 ng.h/ ml. The pharmacokinetic parameters are tabulated in Table 1.

Table 1: Comparison Of The Pharmacokinetic Parameters Of Nicotine Transdermal System

Plasma nicotine concentrations were maintained for the duration of patch application and despite a gradual decrease with time were still elevated above base line at the end of the application period. Because nicotine is the active compound in NTS as well as in tobacco smoke, and cotinine is an inactive metabolite, we did not estimate the cotinine levels in our pharmacokinetic study. The pharmacokinetics of nicotine from NTS provide the necessary basis for characterisation of the transdermal system [4]. The plasma concentration time profile of the developed NTS clearly indicated a biphasic distribution of nicotine. Application of the nicotine transdermal patch resulted in plasma concentrations detectable 2 h after application (3.10 ng/ml) and it increased steadily to reach a peak concentration of approximately 14 ng/ml by about 8 h after administration. Thereafter, the concentration of the drug reduced gradually but even at the 24 h, measurable quantities of nicotine persisted in the plasma. Estimated absorption of nicotine from the patch was good.

The patch has the highest compliance rate and tolerance compared to other dosage forms due to its once daily dosing and few adverse effects. The pharmacokinetic study of our transdermal patch showed a tmax of 8 h and Cmax of 14.5 ng/ml. This could be attributed due to difference in the delivery of nicotine from the patch, also due to difference in study design, race and physiological variations. A major rate limiting component of a transdermal system is likely to be the skin to which it is applied and this may change with age, race and tdermatological damage. The elimination half life of nicotine form our transdermal patch was found to be 4.78 h. This value is in agreement with that reported in literature. The elimination half–life of transdermally administered nicotine ranges from about 3 to 6 h [8]. This was probably because of the continuous nicotine absorption from the patch. Comparisons of the results from different trials are made difficult by protocol variations, especially regarding the dose of nicotine administered. Variation in transdermal drug absorption can compound the changes in plasma drug concentrations that result from variation in drug clearance. In addition, the bioavailability of drugs administered transdermally could potentially be lowered by metabolism in the skin. Therefore it is important to measure the effects of transdermal absorption on the bioavailability and disposition of drugs. The method of blood sampling, that is every 2 to 4 h over 24 h was chosen as it is likely to provide a good estimate of the area under the plasma concentration time curve for transdermal nicotine, where plasma levels of nicotine rise and fall gradually.

Since nicotine is a low-molecular-weight alkaloid with good lipid and aqueous solubility, it serves as an excellent candidate for transdermal delivery. Our NTS was developed with a rate controlling membrane to provide sustained plasma nicotine concentrations throughout the day. In vitro skin permeation studies of the developed NTS demonstrated a constant skin permeation profile with a permeation rate of 95 μg/cm2/h across hairless rat skin. Based on in vitro release studies, 60% of drug was released in 24 h.

The pharmacokinetic parameters of developed NTS was compared with the pharmacokinetic data of Nicoderm (Nicoderm-Marion Merrell Dow inc., Kansas City, MO and ALZA Corp., Palo Alto, CA) reported by Gorsline et al [7]. The data are shown in Table 1. This NTS delivers 21 mg of nicotine over a 24 h period via a rate controlling membrane designed to ensure constant delivery of nicotine to the systemic circulation over the 24-h period. Nicoderm is loaded with 114 mg of nicotine and has an application area of 22 cm2 [9]. The developed NTS is loaded with 40 mg nicotine designed to deliver 27 mg nicotine for 24 h via a rate controlling membrane with an application area of 12 cm2. Student t test were performed using GPIS software to determine any statistical difference in pharmacokinetic parameters between the two transdermal patches. Significance was evaluated at the level of P<0.05 which indicate that there is significant difference in the pharmacokinetic parameters-tmax AUC(0-24) and AUC(0-∞). The C max tand kfor the two patches did not differ significantly. The developed NTS was able to to deliver a similar dose of nicotine as Nicoderm with almost one third of nicotine loading and a smaller application area.

While there is considerable inter-individual variability in the pattern of metabolism, it is also difficult to compare and contrast studies or pool data from previously published trials of pharmacokinetic study of transdermal patches. This could be because of tremendous variation in study design. A lot of interindividual variation in nicotine pharmacokinetics has been reported in literature. Pharmacokinetic data of nicotine transdermal patches reveals that pharmacokinetic parameters of different ethnic groups were different or varied to a large extent. There was no report on pharmacokinetic study done on Indian population. This necessitated the present work. Several reviews have reported on the pharmacokinetics of marketed nicotine transdermal systems [10,11]. These reviews report differences between the systems in terms of both amount of nicotine delivered, as well as rate of delivery; however, the data reported were taken from studies of individual systems. Because these studies used different subject groups and protocols, inferences between the systems is limited.

Fant et al., conducted a study to compare the pharmacokinetics of currently marketed transdermal systems. The results of this study indicate that there are significant differences between the pharmacokinetics of currently marketed patch systems. There were differences among two 24-h patches, despite their similar labeling (21 mg/24 h) [12]. The Alza patch delivered a higher relative dose of nicotine than the Novartis patch, reached higher Cmax, and shorter tmax. A similar finding has been reported by Lin et al.,[13] wherein the clinical pharmacokinetics of transdermal patches in two ethnic groups of smokers were evaluated. The results of the study indicate that though a steady state nicotine plasma had been maintained during the 24 h application, a higher dose had been delivered to Taiwanese smokers than to American smokers. Differences in the amount of nicotine absorbed and the rate of nicotine delivery may be important for effective relief of withdrawal symptoms and cigarette smoking. The overall clinical advantages and disadvantages of the differing profiles of nicotine delivery of the various patches need to be determined with further study.