A series of 2-Substituted (1,3,4) thiadiazolo quinazolines were synthesized by the cyclocondensation of 3-amino-2-mercapto quinazolin-4(3H)-ones with various one-carbon donors and screened for their CNS activities (analgesic, anti-inflammatory, sedative-hypnotic and anticonvulsant). Compound III showed good CNS depressant activity, and it is comparable with the reference standard diazepam. While all the test compounds offered significant protection against strychnine-induced and hypoxic induced convulsion, compound III exhibited equivalent activity with the standard diazepam at the dose tested, and it was found to be significant when compared to control.

Quinazolines and condensed quinazolines are found to possess potent CNS activities like analgesic [1], anti-inflammatory [2], sedative-hypnotic [3] and anticonvulsant [4]. The thiadiazoloquinazoline nucleus is associated with diverse pharmacological activities such as antibacterial [5,6], antifungal [7], phosphodiesterase inhibitory [8], anti-inflammatory [9], platelet aggregation inhibitory [10] and antihypertensive [11,12]. In spite of the fact that a large number of condensed quinazolines have been prepared and studied extensively, the 1,3,4-thiadiazolo quinazoline nucleus is relatively unexplored. In fact, the first report on the synthesis of 1,3,4-thiadiazolo (2,3-b) quinazoline appeared in 1970, and very few reports have appeared since then. Prompted by these reports and to develop our earlier reported 2,3-disubstituted quinazolines [1,2], herein we report the analgesic, anti-inflammatory, sedative-hypnotic and anticonvulsant activities of some 2- substituted (1,3,4) thiadiazolo (2,3-b) quinazolines. 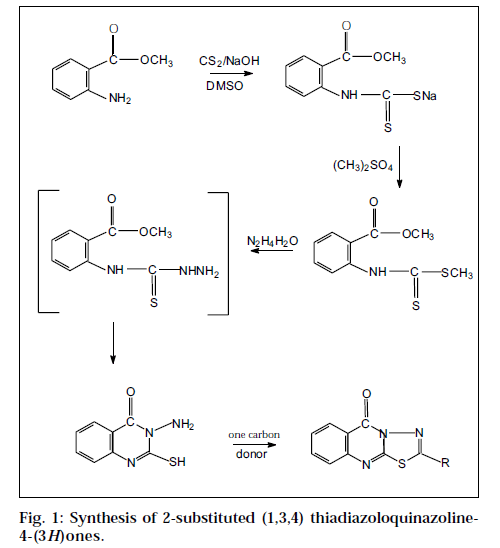 The Institutional Animal Ethics Committee approved the protocol used for experiments. Test for analgesic activity [14] was performed by tail-flick technique, using Wistar albino mice (25-35 g) of either sex selected by random sampling technique. Diclofenac sodium at a dose level of 10 mg/kg was administered as standard drug for comparison. The test compounds at a dose level of 10 mg/kg were administered orally as suspension in 1% sodium carboxymethyl cellulose (Na CMC). The reaction time was recorded at 1, 2 and 3 h after the treatment. The cutoff time was 10 s. The percent analgesic activity (PAA) was calculated by the following formula: PAA = (T2/T1) × 100, where T1 is the reaction time (s) before treatment, T2 is the reaction time (s) after treatment. All the test compounds exhibited mild to moderate analgesic activity and are significant when compared to control; however, none of the compounds exhibited comparable activity with that of standard diclofenac sodium as shown in Table 1.

Each value represents the mean ± SD (n=6). + denotes significant differences from control at P<0.001. Diclofenac sodium used as reference standard at the dose of 10 mg/kg; dose of test compounds 10 mg/kg

The results of sedative-hypnotic activity reveal that all the test compounds depressed the CNS at varying degree. The compound III showed good activity, while the other compounds showed moderate CNS depression.

Anticonvulsant activity by strychnine-induced convulsion method [17] was performed in albino rats. Animals were divided into various groups each consisting of six animals. The test compounds (I-VI) were administered orally at a dose of 50 mg/kg as an aqueous suspension in 1% Na CMC and the standard diazepam was administered intraperitonially at a dose of 4 mg/kg, while the control group was fed with the same volume of 1% Na CMC suspension. After 30 min, strychnine was administered at a dose of 4 mg/kg intraperitonially. The latency of convulsions and mortality was assessed for each animal and is shown in Table 2.

Anticonvulsant activity by hypoxic stress induced convulsion method [18] was performed using mice as testing animals. Mice were divided into various groups, each consisting of six animals. Test compounds and standard diazepam were administered as mentioned above, while the control group was fed with the same volume of 1% Na CMC. After 30 min, mice were subjected to hypoxic stress by putting them individually in a glass container of 370 ml capacity. The containers were tightly closed with greased glass lids to ensure air tightness. Under these circumstances, the animals showed convulsions and mortality due to hypoxia. The latency for convulsions and death was assessed and shown in table, and the results were analysed statistically by the Student’s t test.

While all the compounds delayed the onset of convulsions and death time in hypoxic stress and strychnine induced convulsions (Table 2), the compound III exhibited almost equivalent activity with that of standard diazepam at the test dose in both the methods tested and is significant when compared to control. The compounds I and VI showed comparable activity with that of diazepam in hypoxic stress induced convulsion method. None of the test compounds protected the animals from mortality.

The title compounds showed a wide spectrum anticonvulsant profile against chemical and hypoxic convulsions. The activity of test compounds in the strychnine test showed that the thiadiazolo quinazolines act through inhibitory glycine receptors. Mice subjected to acute hypoxic stress showed increased respiratory rate, tremors and convulsions followed by death. Exposure to stress led to physiological and biochemical disequilibrium. The observed physiological changes such as convulsions and death following hypoxic stress, appears to be due to cerebral hypoxia [19]. Since drugs that inhibit the formation of free radicals are reported to possess protective effects against hypoxia [20], the test compounds might possibly inhibit the formation of free radicals.