In the present investigation, pharmacological evaluation of apigenin, a bioactive principle of Turnera aphrodisiaca Ward (Turneraceae) was carried out. Apigenin was evaluated for antianxiety activity at a dose of 2 mg/kg using well established models of anxiety, the hole board test, light/dark test and mirrored chamber test. Apigenin significantly increased head dipping in hole board test. Further, apigenin increased latency to leave light zone and the time spent in light compartment of light/dark model of anxiety. Apigenin also decreased the latency time to enter the mirrored chamber, and increased the total time spent/number of entries in the mirrored chamber with respect to control. All these observations confirmed the anxiolytic activity of apigenin. At a higher dose (about 12 fold the anxiolytic dose), apigenin showed mild sedative activity in actophotometer as it decreased activity scores. It (2, 5 or 10 mg/kg) was found to be devoid of anticonvulsant, antidepressant and antistress activity in MES-induced convulsion test, despair swim test and cold swimming endurance test, respectively. In tail immersion test for six hours, apigenin exhibited excellent dose dependent analgesic activity, which was comparable to that of morphine sulphate (5 mg/kg). Maximum activity was observed 30 min after the administration of 10 mg/kg dose of apigenin.

Turnera aphrodisiaca Ward (synonym T. diffusa Willd., family Turneraceae) is commonly known as damiana. The leaves of T. aphrodisiaca have been used traditionally as a stimulant, aphrodisiac, tonic, diuretic, nerve tonic, laxative and in kidney, menstrual and pregnancy disorders [1,2]. The British Herbal Pharmacopoeia [3] lists specific indications for damiana as anxiety neurosis associated with impotency, and includes other indications such as depression, nervous dyspepsia, atonic constipation and coital inadequacy. Damiana has achieved some repute in the treatment of sexual impotence where it is used in conjunction with strychnine, phosphorus or some other stimulants in homoeopathic formulations [4]. The leaf infusion of damiana has been used as a traditional remedy in the diseases related to the gastrointestinal and respiratory system [5], reproductive organs [6], and for the treatment of gonorrhoea in Latin American societies [7]. Mother tincture (85% ethanol extract) of damiana is an important homoeopathic medicine for the treatment of sexual debility, and nervous prostration [8].

Aerial parts of T. aphrodisiaca were procured from a cultivated source – Rati Ram Nursery, Village Khurrampur, district Saharanpur (UP) in the month of August 2002, and dried in shade. Identity of the plant was confirmed through Botanical Survey of India, Howrah. A voucher specimen of the plant has been deposited in the Herbarium-cum-Museum of the University Institute of Pharmaceutical Sciences, Panjab University, Chandigarh.

Laca mice (either sex), bred at the Central Animal House, Panjab University, Chandigarh, were allowed a standard pellet diet (Ashirwad, Chandigarh) and water ad libitum. Groups of five mice (20-24 g) were used in all sets of experiments. The animals were fasted for 18 h before use. The approval from the Institutional Animal Ethical Committee of Panjab University, Chandigarh was taken before carrying out biological studies.

Distilled water+Tween 80 (5%) were used as vehicle for preparing the suspension of various test doses of apigenin. Doses of apigenin were prepared by suspending in the vehicle in such concentrations as to administer these to mice in a volume ranging 0.20-0.24 ml per oral route. Diazepam (Triko Pharmaceuticals, Rohtak, Haryana), phenytoin sodium injections (Epsolin injections®; Zydus Neurosciences, Ahmedabad), imipramine (Triko Pharmaceuticals, Rohtak, Haryana) and morphine sulphate (Pharma Chemical Lab, Solan) were used as standard drugs.

The hole-board apparatus comprised a grey perspex panel (40×40 cm, 2.2 cm thick) with 16 equidistant holes (3 cm diameter) in the floor [19,20]. Photocells below the surface of the holes provided the measure of the number of head dips. The board was positioned 15 cm above the table and was divided with black waterresistant marker into 9 squares of 10×10 cm. Thirty minutes after the administration of the test drug, each mouse was individually placed in the centre of the board (facing away from the observer). During 5-min test period, number of head dips was noted.

The light/dark apparatus consisted of a rectangular box (46×27×30 cm), divided into one small (18×27 cm) and one large (27×27 cm) area, with an opening door 97.5×7.5 cm) located in the centre of the partition at floor level19. The small compartment was painted in black, whereas the large compartment was painted in white and brightly illuminated with 60 W cold light source. Thirty min after the administration of the test drug, each mouse was individually placed in the centre of the light compartment (facing away from the door). During 5-min test period, latency of the first crossing from light to dark compartment, and time spent in light zone were noted.

The mirrored-chamber apparatus consisted of a mirrored cube (30 cm on a side) open on one side that was placed inside a square wooden box (40×40×30.5 cm) [21,22]. The mirrored cube was constructed of five pieces of mirrored glass. The mirrors used were mirrored on one surface only (back surface being painted dark brown). The three mirrored side panes, a top pane, and the floor pane faced the interior of the cube. The mirrored cube was placed in the centre of the wooden container to form a 5 cm corridor that completely surrounded the mirror chamber. A mirror was also placed on the container wall so that it faced the single open side of the mirrored chamber. The other three walls of the container were painted dark brown. Thirty min after the administration of the test drug or standard, the mice were placed individually in the chamber of mirrors at a fixed corner. During 5-min test period, the following parameters were noted: (a) latency to enter the chamber, i.e., the time spent in seconds for the first entry into the chamber of mirrors and (b) the time spent with each entry was calculated by dividing the total time spent with number of entries.

An electroconvulsive shock was applied through ear-clip electrodes of electroconvulsometer (IMP Corporation, Ambala) to induce tonic hindlimb extension in mice [24]. The maximal electroshock stimulus used for mice was 50 mA for 0.2 s. Mice were exposed to current, 45 min after the treatments. Time spent by the mice in tonic extensor phase of convulsions was recorded.

Mice were forced to swim, after 1 h of administration of test substances, in a plexiglas cylinder (height 40 cm; dia 18 cm) containing water up to the level of 15 cm, and maintained at 25±2° [25]. Mice were allowed to swim for 6 min. During this test period, the total duration of immobility (floating in the water in a slightly hunched but upright position, its nose above the surface) was noted.

Mice were forced to swim, after 1 h of administration of test drugs, in a plexiglas cylinder (height 40 cm; dia 18 cm) containing water up to the level of 15 cm, and maintained at 10±2° [26,27]. Mice were allowed to swim for 6 min. During this test period, the total duration of immobility was noted.

Groups of mice were subjected to noxious stimulus (radiant heat) by placing 5 cm of the tail in a 500 ml beaker containing 450 ml water maintained at 55±2° before and after treatment with test drugs [28]. The tail withdrawal from the heat (flicking response) was taken as end point. A cut off period 15 s was observed to prevent damage to the tail. Three basal reaction times for each mouse at a gap of 5 min were taken to confirm normal behaviour of the mice. The reaction time at 30 min, 1 h, 2 h, 4 h and 6 h were recorded after the treatment. The percentage maximum possible effect (% MPE) is calculated from the formula, % MPE= (actual time–basal time)/(cut off time–basal time)

The results have been expressed as mean±standard error of mean (SEM). The test doses were compared with control by analysis of variance (P<0.05) followed by Studentized Tukey’s test [29].

Our previous work based on bioactivity-directed fractionation of bioactive methanol extract of T. aphrodisiaca aerial parts afforded an anxiolytic flavone, apigenin which exhibited significant antianxiety activity at a dose of 2 mg/kg using elevated plus maze model of anxiety [18]. To substantiate data, apigenin was further evaluated for antianxiety activity in other well established models of anxiety, and also for various CNS-related bioactivities. Apigenin was evaluated for anti-anxiety activity at a dose of 2 mg/kg using well established models of anxiety, i.e., hole board test, light/dark test and mirrored chamber test. Results of hole board, light/dark and mirrored chamber tests have been shown in figs. 1-3, respectively. Apigenin significantly increased head dipping in hole board test. Further, apigenin increased latency to leave light zone and the time spent in light compartment of light/dark model of anxiety. Apigenin also decreased the latency time to enter the mirrored chamber, and increased the total time spent/number of entries in the mirrored chamber with respect to control. All these observations confirmed the anxiolytic activity of apigenin. 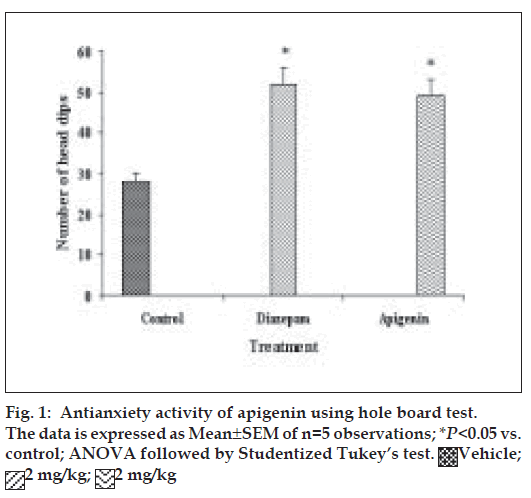