Garcinia lancifolia (Clusiaceae) is an unexplored medicinal plant used as stomachic, diuretic and its fruit is used to cure dysentery and diarrhoea. The acidic fruits are used to prepare juice, pickle and curries. The phytochemical analysis of different extracts of G. lancifolia leaf, stem and fruit revealed the presence of tannins, saponins, flavonoids, terpenoids, alkaloids and cardiac glycosides. The high phenolic content was observed in the methanol extract of leaf followed by methanol extract of stem and dichloromethane extract of leaf. The G. lancifolia fruit juice exhibited high antibacterial activity against Pseudomonas aeruginosa, Escherichia coli, Micrococcus luteus, Streptococcus mutans, Bacillus mycoides and Bacillus subtilis. The methanol extract of fruit pulp was also very effective against Gram-positive bacteria when compared with Gram-negative bacteria. The radical scavenging activity of 1,1-diphenyl-2-picrylhydrazyl was highest in fruit juice followed by methanol extract of leaf and stem. All extracts showed concentration-dependent increase in the antioxidant activity.

Plants contain a broad range of bioactive compounds such as phenolics, terpenoids, carotenoids, anthocyanins and flavonoids. Plant extracts with these bioactive molecules are widely used in the food, pharmaceutical and cosmetics industries[1]. The tremendous potential of medicinally important bioactive compounds from plants is exploited for pharmaceutical purpose in a small percentage[2]. Many of the phytochemicals are not well characterised, and their mode of action is also not well established. Hence, research on these physiologically active components is currently an area of intense effort. The disease preventing potential of phytochemicals in the diet is the main area of scientific interest. Antioxidants have attracted great attention for disease preventive effects[3].

The genus Garcinia belongs to the family Clusiaceae which is popular for medicinal properties. Garcinia lancifolia is an unexplored medicinal plant with rich phytochemicals. In traditional system of medicine the leaves of G. lancifolia are used as stomachic and diuretic. The fruits being acidic are a well?known raw material for preparation of pickles, juice and other culinary preparations. They are used to cure dysentery and diarrhoea. There are no reports on phytochemical constituents and bioactive properties of this plant. The present investigation deals with the phytochemical analysis of G. lancifolia and its antioxidant activity and antimicrobial properties.

Leaves and stems of G. lancifolia were collected from Dekargoan, Sonitpur, Assam. The leaves and stem were separately dried and finely powdered. The G. lancifolia leaf powder was sequentially extracted with dichloromethane (GLD) followed by methanol (GLM) and water (GLW). The G. lancifolia stem powder was extracted with methanol (GSM) and water (GSW). All the extracts were filtered through Whatman Filter Paper No. 1. The filtrate was evaporated and used for analysis. The extracts were dissolved in dimethylsulphoxide at a concentration of 5 mg/ml for further analysis.

About 20 g of G. lancifolia fruits were sliced, homogenised and squeezed in two?layered muslin cloth, to extract the complete juice. The juice (GFJ) was centrifuged at 3000 rpm for 5 min and used for determination of total phenolic content, 1,1?diphenyl?2?picrylhydrazyl (DPPH) radical scavenging activity and antimicrobial activity.

The pulp (residue) left after the extraction of juice is still a rich source of phytochemicals. Hence, the pulp was homogenised (Omni GLH) with 5 ml of methanol. The extraction was repeated until it became colourless. The methanol extract (GFM) was filtered and a final volume was made up to 10 ml with methanol. This solution was used for determination of total phenolic content, DPPH radical scavenging activity and antimicrobial activity.

Phytochemical analysis of G. lancifolia extracts were carried out using standard procedures to identify the constituents as described by Sofowara[4], Trease and Evans[5] and Harborne[6].

Total phenolic content was determined with the modified method of Taga et al.[7]. About 100 μl of test sample (5 mg/ml solution) was mixed with 2 ml of 2% sodium carbonate solution. After 3 min, 100 μl of 50% of Folin?Ciocalteau’s phenol reagent was added to the mixture. After 30 min of incubation at room temperature, absorbance was measured at 750 nm against a blank. Total phenolic content was calculated on the basis of the calibration curve of standard reference gallic acid.

In vitro antibacterial activity was determined by agar?well diffusion method[8]. The test organisms were cultured in nutrient broth for 24 h. This bacterial culture was used as an inoculum for the antimicrobial assay. The plating was carried out by transferring bacterial suspension (105 CFU/ml) to sterile petri plate and mixed with molten nutrient agar medium (Hi?Media Laboratories Limited, Mumbai, India) and allowed to solidify. About 75 ml of the sample (5 mg/ ml) was placed in the wells and plates were incubated at 37° for 24 h and the activity was determined by measuring the diameter of inhibition zones.

The experiments were carried out in triplicates. Significant differences (P<0.05) were determined by Duncan’s multiple range test (DMRT).

Different extracts were obtained by sequential of G. lancifolia using different solvents with increasing polarity. Sequential extraction of G. lancifolia leaf powder using dichloromethane, methanol and water yielded 4.05, 7.02 and 2.16 g of extracts, respectively. Similarly, the G. lancifolia stem powder yielded 3.81 and 3.30 g of methanol and water extracts, respectively. The G. lancifolia fruit yielded 52% fresh juice. The purpose of employing sequential extraction with the same powder was to explore all types of compounds with different polarity effectively and completely. This kind of extraction method will be helpful to screen broad range of phytochemicals. The extraction procedure depends upon the type of bioactive component to be extracted. Polar components such as phenolic acids and glycosides of many flavonoids are generally extracted using water, alcohols or a mixture of water and alcohols. For flavonoids and most carotenoids, nonpolar solvents are used[10]. It has been indicated that methanol is the best solvent for extraction of polyphenols, lactones, phenones, quassinoids, flavones, saponons and some terpenoids. 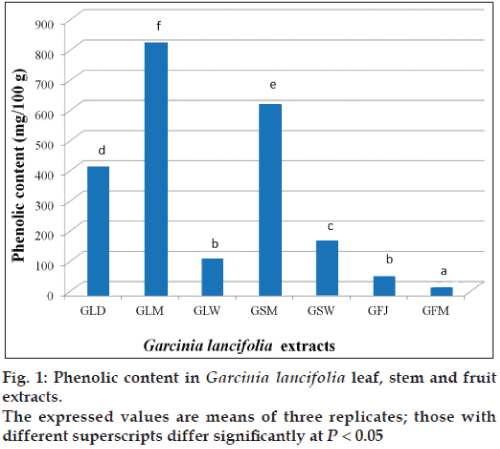 Plant phenolics present in the fruits and vegetables have received considerable attention because of their potential antioxidant activity[11]. These compounds, one of the most widely occurring groups of phytochemicals, are of considerable physiological and morphological importance in plants.

The G. lancifolia extracts exhibited high antibacterial activity against both Gram?negative and Gram?positive organisms. The leaf and stem extracts were not effective against Gram?negative bacteria when compared with Gram?positive bacteria (Table 2). Except methanol and water extract of leaf, which inhibited the growth of P. aeruginosa, other extracts were non?effective against Gram?negative bacteria. Streptococcus mutans was the most susceptible bacteria inhibited by all extracts except water extract of G. lancifolia stem. The Micrococcus luteus was also more susceptible to dichloromethane and methanol extracts, whereas water extracts were not effective. According to Cowan[12], polar extracts are less effective against microbes than non?polar extracts. It may be due to the presence of polysaccharides, polypeptides and lectins that are more effective as inhibitors of pathogen adsorption and would not be identified in the screening techniques commonly used.

The G. lancifolia fruit is used to cure dysentery and diarrhoea by many ethnic people. The antibacterial activity of fruit juice and pulp extracts proved the efficacy of the fruit against dysentery and diarrhoea. All the test organisms tested in this investigation were highly susceptible to the fruit extracts. The fruit juice was very effective with high antibacterial activity against both Gram?negative and Gram?positive organisms (Table 2). The fruit extracts were highly effective against Gram?positive bacteria when compared with Gram?negative bacteria. The high antibacterial activity may be attributed to the presence of phenolics, flavonoids and terpenoids. 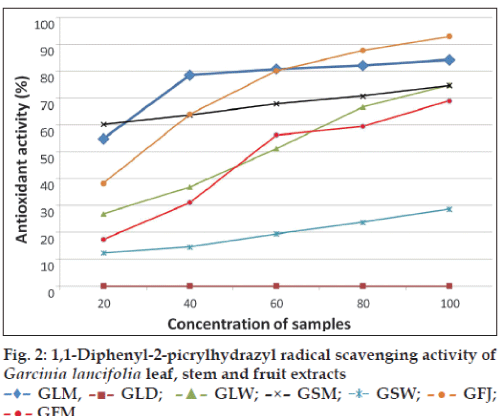