Photodegradation of Methylcobalamin and Its Determination in a Commercial Formulation

Methylcobalamin is a highly photolabile and unstable molecule and hence, studies regarding photodegradation of methylcobalamin were carried out. In order to investigate the stability studies, the drug was subjected to photodegradation by exposing it to different light conditions in the validated photostability chamber as per ICH Q1B guideline. The drug was found to be less degraded in the blue light and was more prone to degradation under fluorescent light. Validated stability indicating liquid chromatography method was used for separating the methylcobalamin and its degradation products. The methylcobalamin peak with a retention time of 2.978 min was observed to decrease with a commensurate increase in a degradant peak at 4 min. The observed degradant peak was suspected to be hydroxocobalamin and was further confirmed by molecular weight determination. The fractions collected from high performance liquid chromatography were later injected into mass detector to determine the mass of the degradation products, which was found to be 665.78 amu.

The photostability of a drug substance might be distinct as the response of the drug or drug product to the exposure to solar, UV, and visible light leads to a physical or chemical change [1]. Methylcobalamin, Cobalt(3+); [(2R,3S,4R,5S)-5-(5,6-dimethylbenzimidazol-1-yl)-4-hydroxy-2-(hydroxymethyl)oxolan-3-yl]1-[3-[(1R,2R,3R,5Z,7S,10Z,12S, 13S,15Z,17S,18S, 19R)-2,13,18-tris(2-amino-2-oxoethyl)-7,12,17-tris(3-amino-3-oxopropyl)-3,5,8,8,13,15,18,19-octamethyl-2,7,12,17-tetrahydro-1H-corrin-24-id-3-yl]propanoylamino]propan-2-yl-phosphate, is a cobalamine form of vitamin B12. It is used in the treatment of hyperhomocysteinaemia and peripheral neuropathy [2,3].It was previously reported predicted that photolysis of methylcobalamin was initiated by a ligand to ligand charge transfer (LLCT) excited state, which included elevation of an electron of the cobalt-carbon adhesion to a π* orbital of the corrin ligand. In possession by a determined proficiency of photolysis the absorption band at λmax=317 nm was assigned to LLCT (CH3 to corrin) transition of methylcobalamin. It was assumed that LLCT transition undergoes configuration interaction with the π-π* corrin intraligand excitation at wavelength above 313 nm is then also associated through the proclamation of methyl radical however with abridged efficacy. This study mentioned about the photodegraded product of methylcobalamin as aquocobalamin based on the spectroscopic nature of the degradation roduct [4]. But this study never mentioned about the mass of the degraded product. Hence the present investigation involved the determination of the mass of the degradation product using mass spectroscopy. 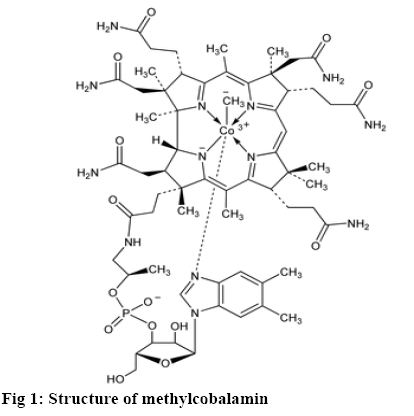 Validated stability indicating liquid chromatography method was used for separating and quantifying the methylcobalamin and its degradation products [3]. The separation was attained using a C18 Hypersil BDS (5 micron, 150×4.6 mm) column using mobile phase comprising of (55:45 v/v) methanol:o-phosphoric acid 0.02 % v/v pH 2.3 with a flow rate of 1.0 ml/min and effluents were monitored at 223 nm. The retension time of methylcobalamin was observed to be 2.9 min.

To obtain O-phosphoric acid (0.02 % v/v) solution, 20 μl of o-phosphoric acid was taken and made up to 100 ml with water. In order to obtain the diluent (mobile phase), 55 ml of methanol and 45 ml of 0.02 % o-phosphoric acid were mixed for dilutions in ratio of 55:45. Methylcobalamin working standard 10 mg was weighed accurately and then transferred in 10 ml volumetric flask. The volume was made up to the mark with diluent. The concentration was 1000 μg/ml. The solution was further diluted to get 100 μg/ml concentration by using mobile phase. The sample was kept in photo stability chamber and different colour of light bulbs were used for the degradation study such as yellow light, sodium vapour lamp, orange light, fluorescent light (lab light), green light, and blue light (Table 1) [7,8]. The sample was taken initially and at different time intervals and loaded into HPLC system.

Commercial formulation A of 500 μg/ml strength was used as test formulation. One millilitre of commercial formulation A was diluted up to 5 ml with mobile phase to get 100 μg/ml concentration. The sample was kept in photo stability chamber and exposed to fluorescent light. The sample was taken initially and at different time intervals and loaded into HPLC system. Tuning parameters for the determination of mass of degradation product are as follows, Table 2 [9,10]. 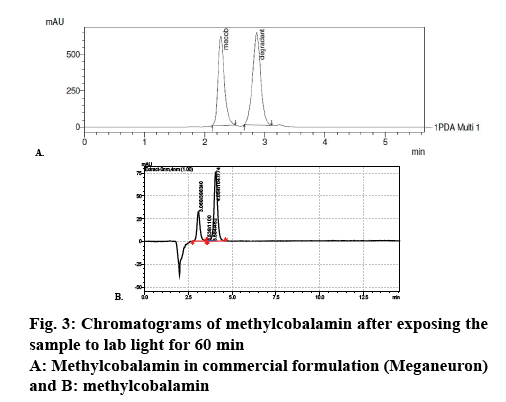 Determination of mass of the degraded products and its determination in commercial formulations were carried out. Samples were introduced into the ion source by means of an axially mounted direct insertion probe, which was terminated with a stainless-steel sample support. Samples were deposited from ACN solution onto the sample support (figures 4-7 and Table 4). 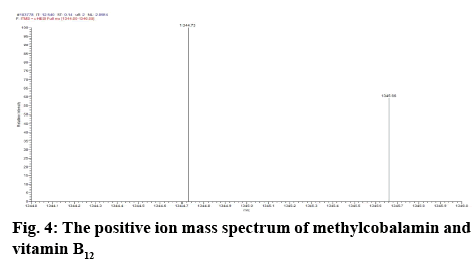 Figure 4: The positive ion mass spectrum of methylcobalamin and vitamin B12 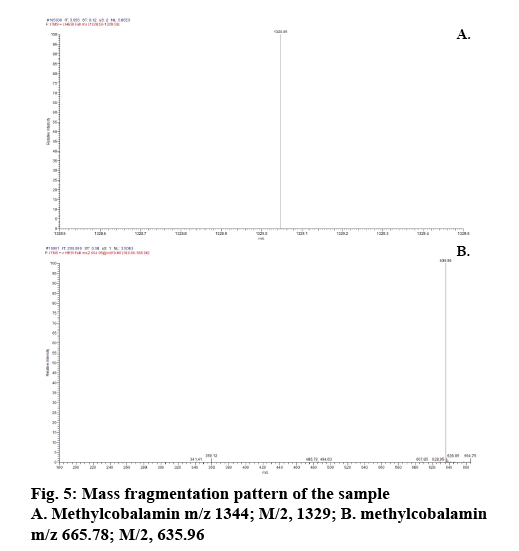 Figure 6: Mass spectrum of the photo degraded sample exposed to light for 60 min From the literature and our work, it has been observed that all the cobalamine molecules exhibit similar fragmentation patterns when subjected to MS fragmentation in the mass range of 1329- 800 amu. From the fragmentation, we have observed loss of acetamide from corrin as well as its major fragmentation is focused on the chain, which is axially attached to cobalt. Direct injection of degradation sample was onto MS/MS and found out that its peak is seen at 665.0 amu, which corresponded to peak 1328.5 amu, first major fragmentation peak. Methylcobalamin on fragmentation lost dimethylbenzimidazol group at cobalt end and few sugar and phosphate groups, which gives peak at m/z 971.

A simple, efficient and sensitive method was developed using PDA detector by utilizing the λmax of the drug methylcobalamin in order to determine its stability. The methylcobalamin peak decreased with a commensurate increase in degradant peak. The peak was found to be of hydroxycobalamin. Therefore, methylcobalamin is very light sensitive and undergoes the homolytic cleavage of the cobalt-carbon bond. This method could be used for stability studies of methylcobalamin API and its commercial formulations.