Protein kinase N2 (PKN2) is a serine/threonine protein kinase[14]. The PKN family is widely distributed in the cell membrane and cytoplasm, which has the kinase activity region at the C-terminal. PKN family include PKN1, PKN2, PKN3, in the C-side kinase region has great similarity, but its distribution, function and regulation are very different. It has been reported that PKN family members act on different phosphatidylinositol and fatty acids and respond to different stimuli. PKN1-2 is widely distributed in eukaryotic tissues and PKN3 is mainly distributed in the muscle, liver and epithelial tissue. This study found that PKN1 is involved in the formation of cytoskeleton and neural cell differentiation with neuroprotective effects, the imbalance can lead to neuropathic occurrence, such as muscle atrophy and Alzheimer’s disease[11]. The latest study found that PKN2 to promoted mouse embryonic development and neural crest migration, which is the key step of nerve regeneration and nerve development. Studies have shown that PKN2 can bind with tyrosine phosphatase via binding of PDZ domain and PKN2 also has SH3 domain, which is a potential effector of Rho signaling pathway[12]. PKN2 has kinase activity, phosphorylates HCV viral RNA polymerase and inhibits PKN2 down regulation of polymerase phosphorylation levels, thereby inhibiting HCV replication[13]. However, whether PKN2 regulates neuronal apoptosis and peripheral nerve regeneration is unknown.

The working concentration of the siRNAs was set as 100 nM and made by diluting 20 μl 10 μM PKN2 siRNA in 180 μl Opti-MEM I reduced serum medium (Invitrogen, Carlsbad, CA, USA) without serum according to the vendor’s recommendation. The LipofectamineTM2000 yransfection reagents (5 μl, Invitrogen, Carlsbad, CA, USA) were used for the transfection of siRNAs into PC12 cells, which was gently mixed and diluted in 250 μl Opti-MEM I reduced serum medium and incubated for 5 min. Immediately before the transfection procedures, the siRNAs were incubated with the diluted Lipofectamine 2000 for 20 min at room temperature, then the siRNA-Lipofectamine 2000 complex was added to each cell wells according to vendor’s protocol. The treated PC12 cells were incubated at 37° in a CO2 incubator with the transfection medium changed after 6 h.

The cell pellets were scraped down and the protein extract was isolated using a RIPA buffer (Santa Cruz Biotechnologies, Santa Cruz, CA). The protein concentration was measured using the BCA method with a Bio-Rad protein assay reagent (Bio-Rad, Hercules, CA). For western blotting, samples (20 mg protein/ lane) were separated on 12 % sodium dodecyl sulphatepolyacrylamide gel electrophoresis and transferred to polyvinylidene difluoride membranes (Pall, USA). To detect P-AKT protein and p-MTOR protein, the membranes were blocked with 5 % non-fat dry milk in Tris-buffered saline containing 0.1 % Tween-20 at room temperature for 2 h and then incubated with the antiP-AKT antibody (diluted 1:1000, Santa Cruz Biotechnologies, Santa Cruz, CA) or with antiAKT antibody (diluted 1:1000, Santa Cruz Biotechnologies, Santa Cruz, CA) and antiP-mTOR antibody (diluted 1:1000, Cell Signalling, USA) overnight at 4°. After washing and incubating for 2 h at room temperature with a secondary antibody conjugated with horseradish peroxidase (diluted 1:4000, Amersham Biosciences, Piscataway, NJ), the blots were washed and developed by chemiluminescence according to the manufacturer’s protocol (Super-Signal West Pico Chemiluminescence Substrate, Pierce). Blots were exposed to X-ray film (Fuji Film, Japan), and the intensity was quantified for both bands. The relative level of protein in the different lanes was compared by analysing scanned images using the NIH IMAGE program. All studies were performed a minimum of 3 times using independent cultures.

The data were collected by investigators blinded to the treatment. SPSS18.0 statistical software was used for data analyses. The data were statistically analysed by one-way analysis of variance as well as Bonferroni post hoc multiple comparison test. Data were expressed as mean±SD. Statistical significance was set at p<0.05.

The influence of PKN2 to the AKT signal pathway was further studied and the downstream pathway mTOR. The ratio of p-AKT and p-mTOR in cultured PC12 cell were detected by western blot analysis, which was treated with either PKN2 or PKN2-RNAi. The result showed that, compared to the vector and RNAi-vector groups, high expression of PKN2 significantly promoted the levels of p-AKT and p-mTOR (p<0.05), while after PKN2-RNAi treatment, p-AKT and p-mTOR levels were similar to those in the Vector group. That means, the expression levels of P-AKT and P-mTOR were elevated in cells expressing PKN2, while the expression levels of P-AKT and P-mTOR were decreased in silent PKN2 cells (figure 1). When an external signal arrived, PI3K is activated to produce a second messenger PIP3 on the plasma membrane and PIP3 binds to the signal protein Akt and PDK1 containing the PH domain in the cell, causing PDK1 to phosphorylate the Thr308 of the Akt protein, leading to activation of AKT[14]. PDK1 is a serine/ threonine kinase that contains a C-terminal PH domain with multiple serine phosphorylation sites. At present, it has been reported that the autophosphorylation of Ser241 is necessary for the activity of PDK1[15]. In addition, AKT can also be activated by PDK2 phosphorylation of its Ser473[16]. The activity of the PI3K-AKT signalling pathway by lipid phosphatase PTEN and SHIP negative, these were different from PIP3 3 and 5 removal of phosphoric acid and transformed into PI(4,5)P2 and PI(3,4)P2 degradation. The activity of the PI3K-AKT signaling pathway is regulated by the phosphoryl phosphatase PTEN and SHIP, which are converted to PI(4,5)P2 and PI(3,4) P2 by removing the phosphoric acid from 3’ and 5’ of PIP3 and degradation[17,18]. After activation of mTOR, phosphorylated ribosomal protein P70S6 kinase and 4E binding protein-1 (4E-BP1) can regulate protein synthesis and cell growth. Phosphorylated p70S6K, a phosphorylated ribosomal protein S6, initiates a series of mRNA transcripts related to axon growth[8]. While 4E-BP1 can inhibit protein synthesis, phosphorylation of 4E-BP1 after its activity decreased, reducing its ability to inhibit protein synthesis, thereby promoting axon extension[19]. Therefore, AKT acts as a bridge molecule linking extracellular signals with cellular responses and plays an important regulatory role in the regeneration of peripheral nerves under the influence of a series of upstream signalling molecules acting on the downstream pathway (figure 2). In the study of neuronal apoptosis, it was found that NO can inhibit the apoptosis of cerebellar granule neurons and inhibit nitric oxide synthase activity downstream of AKT NOS can promote the apoptosis of cerebellar granule neurons, and found that NO play a neuroprotective role through the AKT signal pathway. In the cultured neurons, the expression of the protein of the nNOS gene has a certain temporal characteristic. After knocking out the nNOS gene, the cell viability and number of the cultured neurons were observed. The results showed that compared with the control group. After the knocking out the nNOS gene, the viability of cultured neurons and the number of neurons decreased significantly. The activity of neurons increased when exogenous sodium nitroprusside was added to SNP. On the basis of this, the applicant further studied the effect of AKT signaling pathway on neuronal apoptosis and regeneration. It was found that PKN2 activated AKT/mTOR signaling pathway, promoted the phosphorylation of AKT Thr308 and increased the phosphorylation level of mTOR[20,21]. 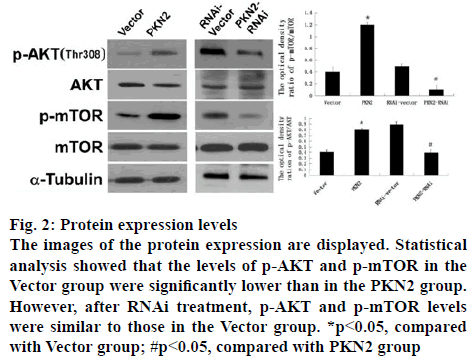