Fluticasone propionate (FP) is a potent triß uorinated glucocorticosteroid administered by inhalation using metered dose inhalers (MDI) or dry powder inhalers (DPI) for treatment of asthma, allergic rhinitis and chronic obstructive pulmonary disease (COPD) [1]. The aerosol particles of the inhaled FP need to be in solution to facilitate their local and systemic effects. However, FP is a poorly water-soluble compound (<1 µg/ml), and hence the dissolution process is likely to be a rate-limiting step in the systemic absorption of FP [2]. Further, hydrophobic molecules are recognized and taken up by macrophages, found at all epithelial lung surfaces, and especially in the deeper regions of the lung [3]. This phenomenon can be decreased by treating these particles with hydrophilic polymer to form a protective hydration shell referred as stealth structure around the particulate [4]. The aim of present study was to evaluate in vivo lung deposition pattern and antiasthmatic efficacy of sustained release FP microparticles for improved therapy of asthma

FP microparticles encapsulated in Poloxamer were successfully prepared using modified spray drying method. The microspheres showed improved dissolution profile and sustained release of FP for more than 60 h. DPI formulations prepared with lactose using FP coated with poloxamer yielded a FPF, based on emitted dose, of 34-40% as compared to blends prepared with plain drug and lactose (17- 20%). The lung deposition was calculated as ratio of activity in the lungs to activity emitted from device, which was found to be only 8-10% of the total administered dose. In case of FP loaded microspheres, the gamma scintigraphic images showed that activity in lungs was observed for 12 h (fig. 1), whereas free 99mTc cleared rapidly over a period of 6 min. More activity was deposited in peripheral region than central region of lungs indicating fine particles produced by microspheres. Furthermore, a decrease in the counts in the central region was observed over the time period resulting in a decrease in central to peripheral ratio (Table 1). In vivo efficacy study revealed that FP encapsulated in microspheres delivered every fifth day of therapy was as effective, as daily FP therapy in decreasing lung inß ammation and lowering eosinophil count as well as peripheral blood eosinophils (fig. 2).

C, I and P represent central, intermediate and peripheral regions of the lung, respectively 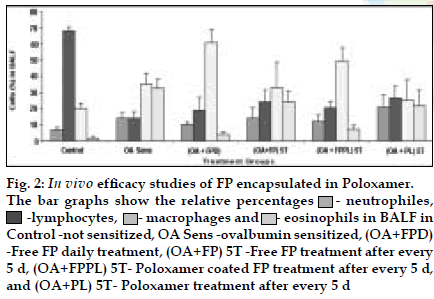 This indicates the lung retention of these microspheres along with sustained action. Pulmonary delivery of FP loaded in Poloxamer is an effective treatment regimen for asthma, to provide localized sustained action in the lungs with reduced local and systemic toxic effects.

The authors wish to thank BRNS-DAE (Sanction no. 2004/35/5/BRNS) for financial assistance, Burculodomo ingredients for lactose and Sun Pharmaceutical Ltd, India for FP.