Osteoporosis is a progressive metabolic bone disease, which decreases the bone mass and deteriorates the microstructure of the bone tissue, increasing the vulnerability of the bone to risk of fracture [1]. Certainly, various treatments have studied for osteoporosis to improve bone density include oestrogen hormone replacement therapy, calcitonin, and bisphosphonate [2]. A recombinant parathyroid hormone (rhPTH 1-34) is the last drug of choice for the treatment of osteoporosis for patients for whom all other drug regimens have failed [3]. It has advantages of activating osteoblasts as an anabolic agent and inhibiting osteoclasts simultaneously [4]. However, rhPTH 1-34 exhibited rapid elimination with a short half-life after subcutaneous injection in the body and requires daily injections in clinical practice [5]. Thus, a new strategy to prolong the therapeutic effect of rhPTH 1-34 is required in patients to avoid repeated injections [6]. A sustained release system for rhPTH 1-34 could improve compliance in osteoporosis patients.

Poly(D,L-lactic-co-glycolic acid) (PLGA)-based microsphere have been studied as one of the materials for controlled release of therapeutic peptides and proteins [7-10]. Although numerous polymers have been tested for the development of controlled release formulation of those peptides and proteins during the last decades, PLGA has been approved polymer for the clinical formulations due to its favorable biocompatibility and biodegradability [7,8,11,12]. Many fabrication techniques have been developed for the efficient microencapsulation of peptides and proteins such as double or multiple emulsions [9], organic phase separation [13], supercritical fluid [14] and spray drying [15]. Especially, for the encapsulation of peptides or proteins, double emulsion (W1/O/W2) method is the most favored to achieve the enhanced loading efficiency and reliable controlled release of drug [9,16-19]. Nafea et al. have studied the PLGA microspheres (MPs) with high incorporation efficiency [20] and Zhao et al. reported the fabrication of magnetic and non-magnetic MPs of PLGA using the W/O/W double emulsion solvent evaporation technique including size control of the MPs [21]. However, this method also required attention to solve problems such as erratic solubility, stability and permeability.

rhPTH 1-34 PLGA MPs were prepared using double emulsion (W1/O/W2) method at mass ratios of 10:0.67, 10:1.0, and 10:1.3 (PLGA to rhPTH 1-34). Each PLGA with different intrinsic viscosity values (0.32~0.44 dl/g and 0.61~0.74 dl/g) was dissolved in dichloromethane to 10 % (w/v). rhPTH 1-34 solution was added into the organic phase and emulsified using a probe-type sonicator (Sonosmasher®, Dongseo Science, Korea) at 15 W for 20 s to obtain primary emulsion. The primary emulsion was gradually added into 16 ml of 4 % PVA (w/v) and then homogenized for 1 min at 5000 rpm (Heidolph Silent Crusher-M Homogenizer, Germany) to prepare the secondary emulsion. After homogenization, the emulsion was vortex-mixed and stirred at room temperature for 3 h to completely evaporate the organic solvent. rhPTH 1-34 PLGA MPs were collected by centrifugation and subsequently washed five times with distilled water. After washing the rhPTH 1-34 PLGA MPs were collected and lyophilized.

The size and morphology of MPs were observed using a SEM (SNE-4,500M, SEC Co., Suwon, Korea). The prepared MPs were mounted on aluminium stubs using double-sided adhesive tape, sputter-coated with a thin layer of gold under vacuum. The coated specimen was observed under the microscope operated at 5 kV of an acceleration voltage. The particle size of the MPs was measured using the Image J software (NIH, USA).

DSC was performed using a Q100 MDSC system (TA Instrument, Leatherhead, UK). Each sample was precisely weighed and put into an aluminium pan. The pans containing samples were hermetically sealed and loaded to the sample compartment. An empty aluminium sealed pan was loaded to the reference compartment. The pans were equilibrated at 20° for 30 min. Samples were heated at a rate of 5°/min between 27 and 170°. rhPTH 1-34 PLGA MPs were analysed, compared to bulk PLGA, a physical mixture of PLGA and rhPTH 1-34.

rhPTH 1-34 PLGA MPs were suspended in phosphate buffered saline (PBS) at pH 7.4 and incubated at 37° with shaking at 50 rpm. At predetermined time intervals, the samples were centrifuged to collect supernatant, and the collected supernatant was replaced with fresh PBS. The supernatant samples were introduced to a HPLC (H02214 808M, Waters, USA) with a mobile phase containing 0.1 % TFA in MilliQ water and 0.1 % TFA in acetonitrile with a gradient program and flow rate at 1 ml/min with a 210-nm UV detector. The released amount of rhPTH 1-34 from the MPs were plotted as a function of time.

rhPTH 1-34 PLGA MPs and free rhPTH 1-34 were subcutaneously injected to male SD rats (6-7 w, 300-350 g, Orient Bio Co., LTD., Korea) at a dose of 0.01 mg rhPTH 1-34/kg. rhPTH 1-34 PLGA MPs were used the formulation ratio of 10:0.67 (w/w) made of low viscosity-PLGA of 0.32~0.44 dl/g. All animal care and procedures were conducted according to the guides and principles in the use of animal establishment by Inha University. Blood samples were collected from the femoral artery and the retro-orbital sinus at set time points up to seven days. Blood concentration of rhPTH 1-34 were determined using an antihuman PTH (1-34) antibody enzyme-linked immunosorbent assay (ELISA) kit (Immutopics, CA, USA). Plasma concentration versus time plot was constructed, and pharmacokinetic parameters (the area under the curve, AUC; peak time, Tmax; and peak concentration, Cmax) were calculated using WinNonlin software (v. 3.0, Pharsight, USA).

The data are expressed as the mean ± standard deviation (SD, n=3). Differences were tested using unpaired and one-sided t-test. Null hypotheses of no difference were rejected if p-values were less than 0.05. 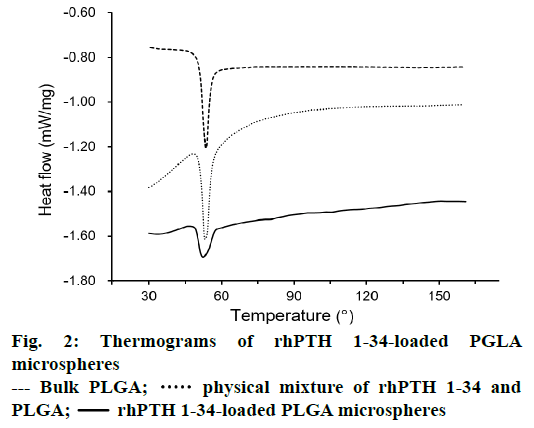 physical mixture of rhPTH 1-34 and PLGA; 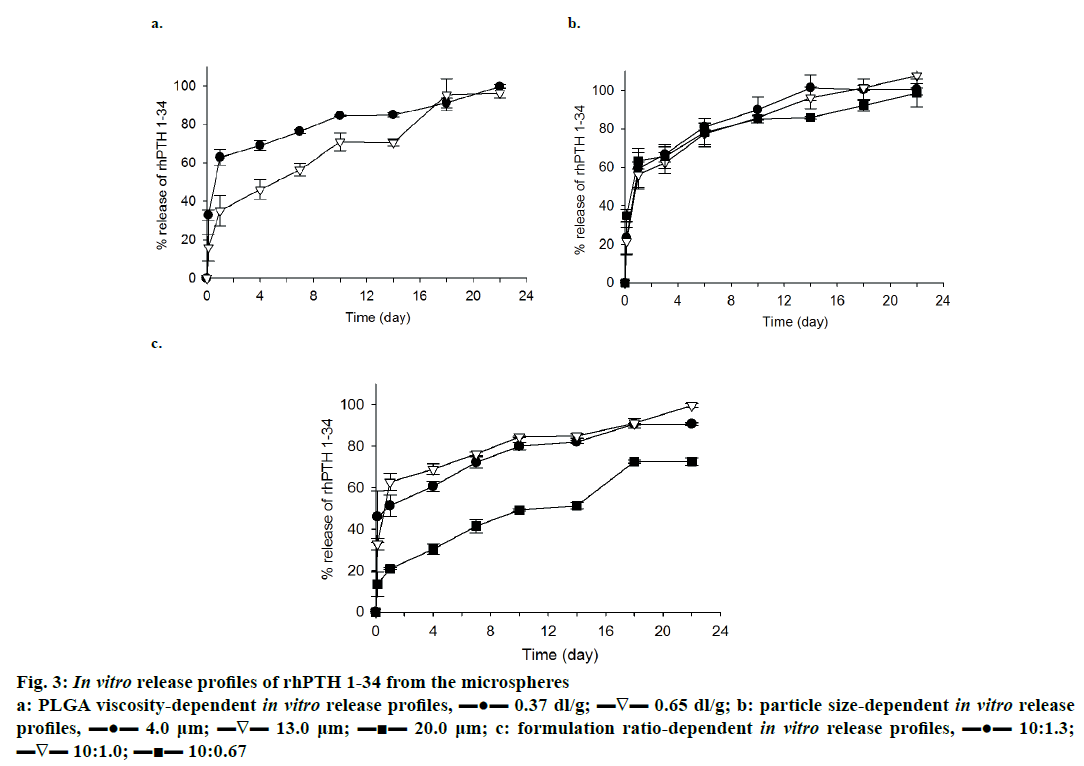 rhPTH 1-34 PLGA MPs were fabricated with different weight ratios of PLGA to rhPTH 1-34 was introduced to release study, and the result of this study presented in Figure 3c. Low viscosity PLGA MPs with 4~5 μm of particle size was used in this study. Drug release from 10:1.0 and 10:1.3 of formulation ratio showed similar trend and achieved maximum release at the end of the study. Especially, MPs made with 1.0:0.67 ratio of formulation displayed more favourable release pattern (like zero-order release profiles) during the release study. 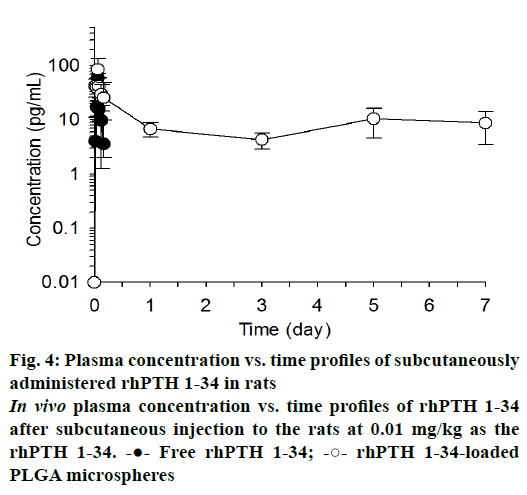 Table 2: Pharmacokinetic parameters after a single subcutaneous administration of the PLGA microspheres

Previously researchers reported that rhPTH 1-34 had limited therapeutic reliability because of its short halflife (~1 h) [3,22]. Controlled release system of rhPTH 1-34 is necessary to prevent the adverse responses of repeated injections and to improve compliance of osteoporosis patients. To overcome these problems, we introduced the PLGA MPs for a sustained drug release of rhPTH 1-34.

PLGA MPs fabricated with rhPTH 1-34 using low viscosity of PLGA polymer showed high release levels compared to those made with high viscosity PLGA (Figure 3a). However, there was no significant sizedependent release property of rhPTH 1-34 from the PLGA MPs except the initial burst (Figure 3b). The burst release was high in the small-sized microparticles. Especially, formulation ratio was related to the release profiles of rhPTH 1-34 and the PLGA systems of the polymeric MPs have been studied to optimize the release profiles of drugs in clinical applications [23-25]. The low viscosity-PLGA MPs at 10:1.0 and 10:1.3 had higher release rates than those at 10:0.67 (Figure 3c). The release kinetics of rhPTH 1-34 from the PLGA MPs can be explained by diffusion and bulk-eroding characteristics of PLGA [9].

Although the release levels of rhPTH 1-34 were distinguished from the several factors mentioned above, all release profiles of rhPTH 1-34 from the MPs were comparable to show the initial burst and continuous release of rhPTH 1-34. In the case of hydrophilic drug, the drug adheres on the surface of PLGA MPs bursts out initially in the hydrodynamic environment after a short-term incubation [26] and drug is released from the matrix of PLGA MPs, which has a short biological half-life [27-31]. Then, the drug can be slowly released for several weeks as secondary burst release caused by the matrix erosion of the PLGA MPs. As controlling the physicochemical properties such as morphology and drug content of the rhPTH 1-34 PLGA MPs, the polymeric MPs can sustain the drug release without dose dumping and reduce the repeated administration number in vivo [9,26,32]. From the results obtained the release of rhPTH 1-34 from the MPs varied based on the formulation factors. The low viscosity-PLGA MPs at 10:0.67 ratio of formulation was applied for the in vivo pharmacokinetic study.

In this study, the rhPTH 1-34 PLGA MPs showed spherical shapes with smooth surface and narrow size distribution confirmed by SEM analysis. The particle sizes were increased as decreasing the rhPTH 1-34 contents in the microsphere from 10:1.3 to 10:0.67 (polymer: drug, weight ratio). It might be the less quantity of drug was occupied with large amount of polymer matrix, resulting the size increment. In other words, the increase of rhPTH 1-34 content in PLGA MPs could decrease the particle size based on the molecular interaction between rhPTH 1-34 and PLGA polymer. The molecular interaction was identified from the shortened peak at 53° of PLGA as shown in the DSC results (Figure 2). There was no distrusted peak of the fabricated MPs, showing the confirmation of the fertile formulation. Thus, the rhPTH 1-34 and PLGA in the MPs were considered as the amorphous states, suggesting that the rhPTH 1-34 was successfully incorporated into the matrix of PLGA MPs. The loading efficiencies of rhPTH 1-34 in the PLGA MPs were up to 84 % (Table 1).

This work was supported by Inha University Research Grant.