Sirolimus is metabolized by the CYP3A subfamily and is a substrate of the P-glycoprotein. CYP3A5 and MDR1 gene polymorphisms have been reported to influence plasma concentrations of this drug and dose requirements, but some recent studies reported conflicting results. The aim of this study was to develop population pharmacokinetics to identify the potential influencing factors that explain pharmacokinetic variability in healthy Chinese adults. Twenty seven healthy Chinese subjects were enrolled into this study and were genotyped for CYP3A5 (6986A>G), MDR1 (3435C>T). Blood samples at different time point were collected from each subject and blood concentrations were measured. The population pharmacokinetic model was established using the non-linear mixed-effects model method, CYP3A5, MDR1, gender and other factors were evaluated in the model as covariates. The results indicated that CYP3A5 polymorphisms significantly influenced the clearance, the central compartment distribution volume was larger in male than that in female subjects, body surface area showed remarkable impact on peripheral compartment volume. All parameters were estimated with acceptable precision. Visual predictive check and bootstrap indicated that the population model adequately captured the observed profiles. This model may be useful in guiding clinicians to adjust drug dosing regimen.

Sirolimus (rapamycin), a macrocyclic lactone and natural fermentation product of Streptomyces hygroscopicus, is widely used as immunosuppression drug to prevent organ rejection especially renal allograft rejection [1]. As one of the calcineurin inhibitors family, sirolimus exerts immunosuppressive effect through inhibition of the mammalian target of rapamycin protein by the sirolimus-FK binding protein complex [2-4].

Sirolimus is poorly absorbed, has a low bioavailability (14 % on average) and a long terminal elimination half-life of approximately 62 h [5,6]. The bioavailability, absorption and metabolism of sirolimus varies widely among individuals, so the blood concentrations reveal large differences among patients receiving the same dosage [1]. Since sirolimus has a narrow therapeutic index as well as large inter- and intra-individual pharmacokinetic variability, therapeutic drug monitoring and individualized immunosuppressive therapy are recommended [7,8] to reduce the risk of acute rejection, toxicity [9] and other adverse effects, such as thrombocytopenia, anaemia, leukopenia and hyperlipidaemia [10-12].

Like cyclosporine and tacrolimus, sirolimus is mainly metabolized by cytochrome P450 3A (CYP3A4 and 3A5) enzymes located at the gut mucosa and liver [13-15], and also is substrate of the multidrug efflux pump P-glycoprotein (P-gp, encoded by MDR1gene) [16,17]. Polymorphisms in the genes of these proteins could thus be associated with inter-individual variations in sirolimus bioavailability and metabolism [17-20]. It is reported that genetics may be accounts for 20-95 % of the variability in drug disposition and effects [21]. Several population pharmacokinetic studies [22–27] have been conducted to assess the pharmacokinetic characteristics of sirolimus in healthy volunteers or renal transplant recipients in White or African-American race. Among all those variants, the polymorphic CYP3A5 (6986A>G) plays a major role and has a significant association with trough levels standardized by the dosage (C0/dose) [28]. But for MDR1 (3435C>T), the impact of its polymorphisms to the inter-individual variability (IIV) in the blood concentration of sirolimus was controversial and incongruous [27,29,30].

Since ethnic differences in drug metabolism are fairly common [31], and the conclusion of different studies are controversial, the objective of this study was to investigate the population pharmacokinetics of sirolimus in healthy Chinese adults, and to identify potential factors that explain pharmacokinetic variability to facilitate individualized therapy.

The study was approved by the Ethics Committee of the 309 Hospital and was accomplished in accordance with Good Clinical Practice guidelines (ethics approval number: 2014060501). Written informed consent was obtained before each volunteer was enrolled. The design and implementation of this clinical study conformed to the ethical principles of the Declaration of Helsinki. All the subjects were admitted to the hospital at 9:00 pm the day before the study. Breakfast was given 2 h after the drug was administered on the research day. The dose of sirolimus was 6 mg and whole blood was collected in EDTA tubes from each subject pre-dose, then at 0.5, 1, 2, 3, 4, 6, 8, 12, 16, 24, 48, 72, 96, 120 and 144 h post-dose. These samples were used to determine the sirolimus concentrations and were stored at –70°. All the subjects were administered drug in fasted state and then received a standard breakfast 30 min later.

Subjects who were 18 to 45 y of age, had a body mass index between 18 and 25 kg/m2 and a body weight >50 kg (male) and >45 kg (female) were eligible for inclusion in the study. Subjects with active major infections, such as hepatitis B or C infection, human immunodeficiency virus were excluded. The demographic, biological and pharmacogenetic characteristics of the subjects were listed in Table 1.

All sirolimus concentrations were measured by high performance liquid chromatography-tandem mass spectrometry (HPLC-MS/MS) method using an Extend-C18 column (2.1×50 mm, 3.5 μm). The mobile phase consisted of methanol and 10 mM ammonium acetate and the flow rate was 0.4 ml·min-1 (gradient elution). Briefly, sample preparation consisted of adding 100 μl of a solution of ascomycin (internal standard, IS) in methanol, 200 μl acetonitrile, 200 μl zinc sulphate (2 M) and 100 μl, 50 % methanol to 100 μl whole blood, the mixture was centrifuged, and the supernatant was drawn off for test. The compounds of interest were separated by HPLC and detected by MS/MS in the positive ion, selected reaction monitoring mode using the following transitions: sirolimus (m/z 931.7→864.8) and IS (m/z 809.7→756.6; Figure 1). The calibration curve ranged from 0.5- 100.0 μg/l in whole blood. The within-day and betweenday coefficients of variation and bias values were <15 % over this range. 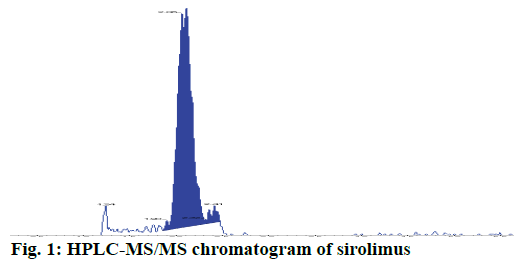 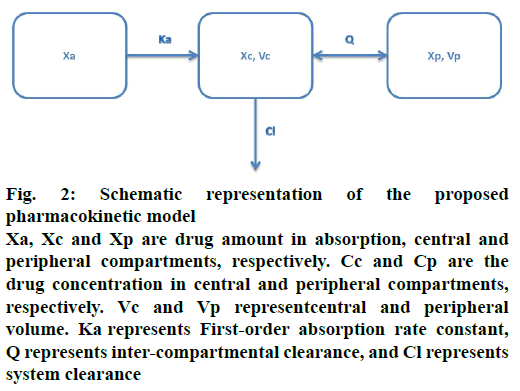 The effects of covariates such as gender, age, height, weight, body surface area (BSA), hematocrit, red blood cells, hemoglobin, platelets, leukocytes, alanine transaminase, aspartate transaminase, cholesterol, triglycerides, proteins, albumin, blood urea nitrogen, serum creatinine, CYP3A5 and MDR1 polymorphisms were evaluated for the population model. Each selected covariate was first tested by univariate non-linear mixedeffects modelling analysis to confirm its relevance. A decrease in the objective functional value (OFV) of at least 3.84 (p≤0.05) was first required to consider the covariate in the intermediate model. Classically, a covariate was not retained at this step in case of obvious over-parameter of the model. Secondly, all such significant covariates were added simultaneously into the intermediate model, and then each covariate was removed from the full (intermediate) model independently to confirm its relevance (backward deletion strategy), and the resulting variation in the OFV (compared with the full model) examined. An increase in the OFV of more than 6.64 was required to confirm the significance of the covariate and take it into account in the final model.

The plots of means of observation, prediction versus time were used to look for the goodness-of-fit of the final population model. According to OFV and goodness-of-fit, the best model was selected, and visual evaluation method was done by inspection of scatter plots of observation (dependent variable) versus prediction (PRED). The relative prediction errors were graphically described by conditional weighted residuals (CWRES) plotted against PRED and time after dose.

Model validation was performed using visual predictive check (VPC) for drug concentrations. 1000 simulations were generated using the final model and the simulated percentiles (2.5th, 50th, 97.5th) were calculated. The adequacy of the model was evaluated by comparing the distribution of observation with the distribution of simulated data. The final population model robustness was assessed with a bootstrap method. One thousand bootstrap datasets were generated by repeatedly sampling with replacements from the original dataset, and the final model was fitted to the new datasets. The median and 95 % confidence interval (95 % CI) of the parameters were compared with the final parameters estimates.

A two-compartment open model adequately characterized the drug concentration dataset. The stepwise forward addition showed that the age, body weight, MDR1 polymorphism and other factors did not have any influence on parameters to a statistically significant extent in this population. Gender and BSA were identified as covariates influencing central and peripheral volume, respectively: if gender= female, Vc= 184.461; if gender= male, Vc = 184.461×e0.266; Vp = 170.029×BSA2.165.

Goodness-of-fit plots did not show systematic bias for the pharmacokinetic model predictions. The plots of CWRES versus time and PRED showed that the CWRES were scattered evenly around the zero line. There was no major trend in magnitude of CWRES (Figure 3). The plots of observed data (blood concentration) against PRED indicated that the data points distributed evenly around the line of identity (Figure 3). Since, random errors are ignored in the PRED, the deviations from the expected appearance are usually due to misspecifications in the model. The VPC results are shown in Figure 4, and we can see an overall trend of fitted data. The plots of VPC suggested a suitable recapture of the central tendency in the concentrations (about 50 % of the observations fall above and 50 % below the median predicted values (solid line) at each time point). Ideally, 95 % of the observation should lie within the 95 % CI. As expected, VPC showed that 6.3 % (27/431) of drug concentrations fell outside the 95 % CI. Bootstrap results showed a success rate of 100.0 % (all the 1000 were successful). The 95 % CI of bootstrap analyses showed acceptable robustness of the final model. The data are presented together with the final estimates in Table 2. Bootstrapping of the population pharmacokinetic model yielded median parameter distributions to be similar to the estimates during the data fitting. Overall, suitable predictive performance was obtained with this two-compartment population model. The sirolimus CL was significantly decreased when the CYP3A5*1 wild type mutated to *3, the CL typical value of CYP3A5*1 wild type, CYP3A5*1/*3 type and CYP3A5*3/*3 type were 10.813 l/h, 10.445 l/h, and 8.110 l/h, respectively, which means those patients bearing at least one active CYP3A5*1 may require higher doses of sirolimus to achieve therapeutic plasma concentrations than CYP3A5*3/*3. CYP3A5*3 is located on intron three, its mutation results in a splicing defect of the mRNA and produces an unstable and non-functional protein, which induces the decrease of enzymatic activity and drug clearance. The data observed in this study coincide with prediction, and also with previous reports [34-36]. From the population pharmacokinetics model, we also found that gender showed remarkable impact on central volume, and BSA influenced peripheral volume of sirolimus. The typical value of sirolimus central volume observed in this study was 184.461 l in female and 240.537 l in male, which was reported ranged from 187-249 l [27]. The typical value of sirolimus peripheral volume was 170.029 l. The central volume in compartment model refers to organs and tissues with abundant blood flow, such as liver, kidney and heart, while the peripheral volume refers to organs and tissues with poor blood flow, such as muscle, fat, skin and skeleton. For one drug, its distribution volume is usually affected by the volume of the organs and tissues itself. As the males generally have bigger body configuration than females, so the central volume of distribution are bigger in males than in females. This conclusion was similar to that of a previous study [37]. For BSA, those with bigger body configuration may have larger BSA, and also have larger peripheral volume. BSA was mentioned to be correlated with apparent volume of distribution of a peripheral compartment in a previous study [6].

A previous study has reported that MDR1 (3435C>T) were significantly associated with long-term sirolimus dose requirements [30], which means its polymorphisms may influence pharmacokinetics of sirolimus. But in this study, no significant influence of MDR1 (3435C>T) polymorphisms on the pharmacokinetics of sirolimus were found, this conclusion was supported by several other studies [38-40].

In summary, estimates of sirolimus population pharmacokinetics were obtained in this study. The influence of CYP3A5 (6986A>G) polymorphisms, gender, BSA were identified as important covariates for sirolimus CL, central and peripheral volume respectively. However, it is a relatively small-scale study, and the finding need to be confirmed by research of larger samples.

This work was supported by the Capital Health Development project (2011-5007-04) from Science and Technology Commission of Beijing.