Sulfonamides are a class of synthetic drugs, which share structural similarity with PABA (p-aminobenzoic acid) [1]. Sulfonamides and their N-derivatives are being constantly investigated to explore their diverse applications [2]. In the history of human pathology, sulfonamides were the first chemotherapeutic agents, which are effective against bacterial infections. Although penicillin and other antibiotics have diminished the status of sulfonamides [3], but still these drugs are used effectively against the infections of ophthalmic, urinary and gastrointestinal tract [4]. In humans, the sulpha drugs and their salt [5] are still of first choice along with ampicillin and gentamycin, against the infections caused by Escherichia coli. Sulpha drugs exhibit their action by competitive inhibition of the enzyme dihydropteroate synthetase towards the substrate p-aminobenzoate. Sulfonamides are antibacterial drugs, which are used both for human and animal chemotherapy to cure the infections of digestive, respiratory systems, skin and for prevention of coccidiosis of small domestic animals [6]. The dosage formation of sulpha drugs, its quality and release in the systemic circulations play vital analytical task.

Use of nanotechnology in the current scenario of research and technology is inevitable. Various applications of nanotechnology have been utilised to fabricate nanomaterials useful in the mechanical, electromagnetic and chemical fields. In the pharmaceutical field, particularly in designing dosage forms, nanotechnology is often used to improve the efficacy of various water soluble and insoluble drugs and bioactive molecules through improving solubility, retention time and bioavailability. Mostly these studies are focused on the synthesis and applications of metallic, organic and polymeric nanoparticles while small organic molecules are comparatively less explored [7]. Now a days, nanoaggregates of drugs have emerged as potential candidates for modulation of electronic and molecular properties through molecular design [8,9].

Self-assembly of drug molecules to nanoaggregates is feasible in the aqueous environment through the amphiphilic and hydrophobic interactions [10-12], which result into numerous changes at physicochemical and biochemical level. These aggregations/interactions are one of the deciding factors in determining the destiny of a pharmaceutical preparation in vivo [13]. A small change in physiological conditions might result in the coexistence of many drug aggregates, which could alter biorecognition and transport behaviour of drug candidates. Combinations of such type could become a sensation and might show prominent therapeutic effects. However, estimation of accurate drug efficacy in these cases is a tedious job. The interactions with inter and intra molecules/receptors and transport across cell membrane depended greatly on the size, structure, surface charge and hydrophobicity of the aggregates. Studies related to self-assembled drugs and their in vitro and in vivo therapeutic efficacy are lacking. Polymer-drug nanoconjugates can provide prominent insights into the self-aggregation phenomenon of drugs. This process can further alter/modify aggregation phenomenon and hence the therapeutic effect of drugs. Past years had seen the efforts regarding co-delivery of polymer-drug nanoconjugates to desired target sites [13-15]. Many polymer-drug nanoconjugates have been designed targeting site-selective drug release and many of these are under clinical trials and some have received approval [15-20]. Polymer and antimicrobial drug nanoconjugates show improved solubility and therapeutic efficacy, as well as reduced side effects and multi-drug resistance in comparisons to pure antimicrobial drug [21-23]. Polymer carrier also promotes assembly of drugs and plays vital role in modification of drug nanoaggregates.

Polyethylene glycol (PEG) synthesized by the polymerisation of monomer ethylene glycol and is easily available in a wide range of molecular weights. The main utilisations of PEG in pharmaceutical preparations are; orally as a laxative, excipient in dosage formulations, and coating agent in capsule preparation [24]. PEG is extremely biocompatible and not a biodegradable polymer, which is excreted unchanged by the kidney. PEG is a hydrophilic polymer and can be used to stabilize nanoparticles in aqueous media, increase solubility and avoid aggregation by steric hindrance. As PEG does not have any ionic moiety, risk is almost negligible when it came in contact with charged biological molecules like DNA [25]. Immune system does not recognise PEG easily, so its retention time and in vivo circulation increases and the chances of PEG conjugated drug nanoaggregates to reach the target site becomes high. This is known as the stealth effect and makes PEG a suitable nano-drug carrier [26].

Taking cognizance of reported studies of both antimicrobial drugs and nanoaggregates, it was decided to conjugate both sulfonamide nanoaggregates and PEG to enhance the potential applications in antimicrobial chemotherapy. Initially, sulphanilamide (SM) from the class of sulphonamide antibacterial drugs was selected for evaluating potential applications in sustained drug delivery [27,28]. This is the first attempt by our group to conjugate drug nanoaggregates with PEG to evaluate drug delivery applications against four bacterial strains.

SM is a sulfonamide and exhibit antibacterial action against various Gram-positive and Gram-negative bacterial strains by mimicking the action of PABA. The SMONAs were synthesized by reprecipitation method [29]. In this method about 1 ml of SM solution in DMSO was injected in to 50 ml of double-distilled water keeping constant rate of addition and stirring. It was followed by sonication for about 20 min to produce SMONAs of desired size at ambient temperature. The concentration of injectable solution is the deciding factor for the size of nanoaggregates and here the concentration of SM was varied to get the desired size of SMONAs.

Nanoprecipitation is commonly applied to several polymeric systems. In the present case PEG was dissolved in DMSO. Under vigorous stirring this solution was poured into water already containing SMONAs, followed by sonication for 30 min. PEG acted as a stabilising agent for the SMONAs. The nucleation process of polymer immediately began when it came in contact with water and growth of nanoaggregates stopped when stability is reached. Excess organic solvent was then removed from the colloidal suspension by evaporation.

Entrapment capacity of SM with PEG:

Weighed amount of SM-loaded PEG was dissolved in methanol, sonicated for 5 min to break the PEG, diluted suitably and then analysed on a UV spectrophotometer at 260 nm [30]. The encapsulation capacity was determined by the following Eqn., entrapment capacity = actual weight of drug/theoretical weight of drug×100.

The UV-absorption studies of the SM, SMONAs and PEG-coated SMONAs were performed on a Shimadzu (UV-1800) spectrophotometer using 1 cm wide quartz cells. The range of 200-500 nm was examined and baseline correction was applied for each spectrum.

Steady-state fluorescence was measured using a PerkinElmer Luminescence spectrometer LS-55 using pyrene as an external fluorescent probe (2×10−6 M) at an excitation wavelength of 280 nm at 25°. Temperature was controlled using a built-in temperature controller within ±0.1° by using circulating water bath. The spectra were recorded between 290 and 450 nm using an excitation and emission slit width of 2.5 nm, each.

DLS measurements were made using a light scattering apparatus (Nano-ZS, Malvern Instruments) equipped with a built-in temperature controller having an accuracy of ±0.1°. A quartz cuvette with a path length of 1 cm was used for measurement and average of 10 measurements was considered as experimental data. Data were analysed using the standard algorithms and is reported with an uncertainty of less than 8 %.

SEM measurements were performed using a Zeiss Ultra 55-Limited edition SEM. Solutions of SMONAs and PEG-coated SMONAs were placed on a thoroughly cleaned glass surface and dried for 24 h in air before imaging. Silver coating was given to samples before measurement.

TEM measurements were performed on a JEM-2100 electron microscope at a working voltage of 200 kV. A drop of freshly prepared SMONAs and PEG-coated SMONAs were placed on a carbon coated copper grid (300 mesh), and the residual solution was blotted off. The samples were dried in air at room temperature for 24 h before measurements.

The conversion of SM to SMONAs was examined by recording UV/Vis and fluorescence spectra. Formation of nanoaggregates in aqueous solution resulted in broadening of absorption bands accompanied with small red shifts in maxima positions and by decrease of extinction coefficients (hypochromism) as compared to the spectra of the SM in organic solvent at the same concentration (Figure 1a). The fluorescence spectrum of SM manifested the difference in the emission profile of SMONAs in aqueous system and organic solvent system (Figure 1b). The normalized intensity emission profile clearly showed that SMONAs displayed broad featureless emission centred at 350 nm, while SM dissolved in a suitable organic solvent showed fluorescence emission at the 275 nm wavelength. The emission profile SMONAs was recorded at different dilutions of SMONAs. With increase in concentration of SM for the formation of nanoaggregates, the fluorescence intensity also increased, with no concentration-dependent shift observed in the emission profile (Figure 2). This is due to the fact that, decrease in concentration, did not affect the regular arrangement of nanoaggregates, which were uniformly dispersed in the aqueous phase. 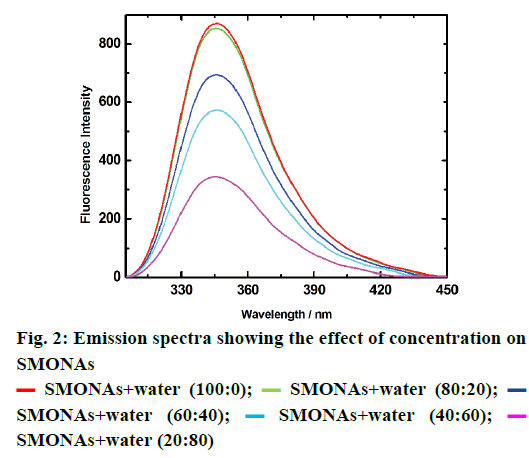 Figure 2: Emission spectra showing the effect of concentration on SMONAs The particle size, polydispersity index and zeta potential of SMONAs and PEG-coated SMONAs were also calculated for more clarity (Table 1). pH of the body fluids that usually come in contact with a pharmaceutical formulation changes from acidic to alkaline, depending upon the function of the organ involved. It is necessary to have the knowledge of the effect of pH during the stability studies, transport or release of any pharmaceutical preparation. This part of study explores the stability of SMONAs at different pH, using emission spectroscopy in aqueous medium as shown in Figure 4.

SMONAs showed an increase in emission maximum with increase in pH from 4 to 9, which indicated that greater disintegration of SMONAs occurred in alkaline media and hence would limit applications in drug delivery. This would provide rationale for the use of a capping/coating/stabilizing agent such as PEG-6000 on SMONAs.

Formation of the PEG-coated SMONAs were further confirmed using DLS, SEM and TEM studies (Figure 3). DLS analysis showed (Figure 3) the formation of the PEG-coated SMONAs resulted in an increase in the size of the nanoaggregates from 100 nm to 197 nm. Interestingly, SEM images were recorded at different optical zoom and showed fern leaf like morphology (Figure 3). TEM studies showed similar morphology with average size of 200 nm (Figure 3). Further drug PEG entrapment capacity was also calculated [30], which was observed to be 82.1±2 % suggesting that SM was effectively capped by PEG.

Keeping in view the lack of effect of pH on the disintegration of the PEG-coated SMONAs it was decided to extend studies further to determine the effect of biological ions, which might also be responsible for its disintegration. The interactions between SM and PEG-coated SMONAs with ions present in biofluids would help to understand their fate (stability and transport across biological barriers) and influence in the release of SM at the site of action. Figure 7: SEM images of S. aureus at different intervals of time
(a) Before treatment, (b) 48 h incubation after treatment