Objective of the present study was to develop and evaluate vaginal films with essential in vitro studies. Films were developed using hydroxypropyl methylcellulose as a polymer and formulations were coded. The developed films were evaluated with Fourier transform infrared spectroscopy, drug content, viscosity, surface pH, thickness, mechanical characterisation and in vitro drug release study. Fourier transform infrared spectroscopy results confirmed that there is no chemical interaction between drug and stabilisers/excipients. The batch variation was not more than 5% for average thickness and weight of the films. The drug content for the prepared formulation was in the range of 72.32±0.18% to 94.48±0.54%. Viscosity of the formulations increased with the increase in concentration of polymer. Mechanical characterisation revealed that tensile strength and percentage elongation of the films improved as there is increase in degree of substitution of the polymer, but the values of modulus decreased which confirmed that all the prepared films are soft in nature. The in vitro study indicated that 1 and 2% concentrations of polymer are the least concentrations to control the release of drug whereas the 4% concentration of polymer is a good and more effective concentration to control the release. Only one prepared formulation released the drug by following anomalous transport whereas other film formulations released the fluconazole by following Fickian diffusion mechanism. Prepared vaginal films may be an important alternative for the treatment of vaginal candidiasis, because these prepared films suggest the benefits of controlled release of fluconazole at the site of absorption.

Vaginal fungal infections are common in almost all women of all age groups due to certain factors. These may be related to menstrual cycles, sexual intercourses, birth control methods, vaginal infections, aging, medicines, or hormonal changes after (or) at the time of pregnancy [1]. Vaginal infection is the major problem for all above given problems. It is caused by the presence or excessive growth of yeast cells, bacteria or viruses. Sometimes the infection occurs due to the imbalance or changes in vaginal conditions like the vaginal pH. In normal adult women the vaginal pH is 3.5 to 5.0 and is naturally maintained by the production of lactic acid by the vaginal microflora, but in the presence of semen in vagina it changes to slight alkaline i. e., pH 7.0 to 8.0. This alkaline or slight alkaline condition is more favorable condition for vaginal infection [2,3].

Vaginal candidiasis is a major kind of vaginal infection which occurs mainly due to over growth of yeast or fungus in vagina. As per the literature [4‑6], most women have a vaginal yeast infection at least once during their lifetime. Actually, candida and some other types of germs lives in vagina which keep each other in balance. But, sometimes due to some changes like wetting or discharge in vagina or due to the use of antibiotic or other factors which affects the normal balance of bacteria in vagina, the number of Candida albicans increases which leads to yeast infection.

In recent years [4,5], the medications most commonly used for the treatment of vaginal yeast infections are imidazole derivatives. Fluconazole is a drug which also comes under imidazole antifungal category. Fluconazole is available in various dosages forms in market like powder for oral suspension, oral tablets and others. But oral formulations cause more gastrointestinal side effects (like nausea, vomiting, diarrhea and abdominal discomfort) in comparison of vaginal products [7]. On the other hand, conventional vaginal dosage forms of antifungal drugs has limitations, which are poor retention, leakage and messiness causing inconvenience to users, leading to poor patient compliance, loss of therapeutic efficacy [8‑10]. However, a clear need is required to increase the patient compliance and therapeutic activity of the drug. In the present study, vaginal films were prepared to increase the therapeutic activity of drug and to overcome the problems due to conventional dosage forms.

Before preparation of vaginal films, compatibility of drug with polymer present in film formulation was studied using FTIR spectrophotometer (Shimadzu‑8400 S, Japan) by KBr pellet method in the range of 4000-400 cm‑1. The spectra of pure drug was compared with the spectra of drug and polymer mixture [8,11].

Hydroxypropyl methylcellulose films were prepared using solvent evaporation technique. Solutions containing different ratios of polymers were prepared in dichloromethane:methanol (8:2) and coded as FLZF1, FLZF2, FLZF3 and FLZF4. In one beaker calculated amount of drug was dissolved in methanol and in another beaker HPMC polymer was dissolved in dichloromethane portion. Then first beaker solution was added into the second beaker solution followed by stirring. In required quantity PEG 400 as a plasticiser and permeation enhancer was added in to the mixed solution with continuous stirring at 800 rpm for 2 h. Then 15 gm of polymer solution was poured on a glass film mould of defined area after putting on a horizontal flat surface followed by drying at a room temperature for 48 h. Dried films were removed from the glass moulds and kept at a butter paper. All the films were cut into pieces of defined size (2×2 cm2). The films were wrapped in big size butter paper followed by wrapping with laminated aluminium foil. The wrapped films were stored in a desiccator for further studies. Compositions of different formulations are given in Table 1 [8,11‑14].

The films of defined size (2×2 cm2) were taken into 10 ml volumetric flask and dissolved in acetate buffer pH 4.6. All the samples were diluted appropriately and the absorbance was examined at 261 nm using spectrophotometer (Shimadzu UV‑2450, Japan) [8,13].

The surface pH of the prepared vaginal films was determined to evaluate the possible irritation effects of the mucosa. The films were left to swell in 5 ml of acetate buffer pH 4.6 in petri‑dish for 2‑3 min. Films were removed from the Petri dish and surface pH was analysed with the help of pH paper [8].

Measurement of mechanical characteristics of films

Mechanical characteristics of the prepared films were measured as tensile strength, percentage elongation and modulus. Mechanical properties of films were measured using an Instron universal testing machine, UK (Model 3366, Instron). It consisted of two loaded grips. The upper one was movable and the lower one was fixed. The test film specimen of definite size (2×2 cm2) was attached between these load grips and force was gradually applied till the film broke. The stress‑strain curves were recorded for each sample and the tensile strength at break, elongation and modulus were taken directly from the software of Instron universal testing machine [8,15,16].

A Brookfield DV III Ultra Programmable Rheometer (LV) was used to measure the viscosity (in cps) of the formulated gels/solutions of different polymeric films [17].

In order to investigate the kinetics and mechanism of drug release from prepared films of different drug and polymers ratios, the release data were examined using Zero‑order kinetic, First order kinetic, Higuchi kinetic and Korsmeyer‑Peppas model [18].

In the present study, fluconazole‑HPMC films were prepared in various compositions followed by characterisation. HPMC was chosen as film forming polymer in this study because as per literature review it was reported that it is nontoxic, nonirritant, stable at vaginal pH, imparts the viscosity of the solution, has good wetting properties and maintains prolonged contact with mucous membrane [8,11,21‑24].

Different vaginal films were prepared with solvent evaporation method and coded as FLZF1 to FLZF4 (Table 1). FTIR spectroscopy was carried out for drug‑polymer interaction and to confirm the stability of drug in the prepared films with other solvents and excipients. Spectra of drug‑polymer mixture and prepared films were compared with pure drug and the data is given in the Table 2.

Vaginal films were prepared in different drug: polymer ratios and their physical properties were examined (Table 3). All the formulations were found to be homogeneous, colorless, transparent and flexible except film FLZF1. This is indicating that the quantity of polymer in FLZF1 is not sufficient to produce a good film. All the films were found to be easily peeled off from the moulds. This study suggests that the 0.5% w/v concentration of plasticiser PEG 400 for vaginal films preparation is sufficient. The batch variation was not found more than 5% for average thickness and weight of the films. This is indicating the consistency in the preparation of vaginal films.

Table 4: Drug content and ph and viscosity (of formulation dispersions) of vaginal films

The mechanical characteristics of the prepared films were determined as the tensile strength, percent elongation and modulus. Increasing the amount of polymers in the prepared films leads to an increase of the maximum force due to degree of HPMC polymer substitution. All drug‑polymer formulations showed a significant flexibility of the prepared polymeric films [15,16].

Viscosity data of prepared films (Table 4) exhibits that as the concentration of polymer is increases the viscosity of prepared films increases. This may be due to increase in degree of substitution of HPMC in prepared formulations. The study is indicating that the increase in polymer concentration based viscosity may be helpful to control the release of fluconazole from film formulations. 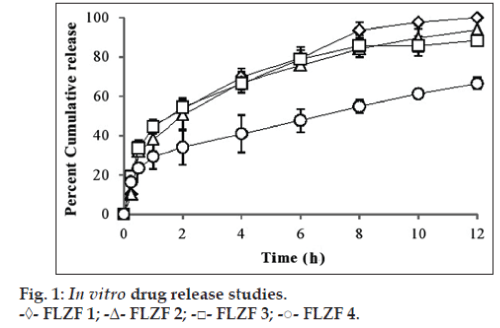 The correlation coefficient values were calculated from the in vitro drug release data for zero‑order, first‑order, Higuchi and Korsmeyer‑Peppas models to find out the best fit model. Almost all the formulations releases the fluconazole from the films by following Higuchi and Korsmeyer‑Peppas model except FLZF1 and FLZF2 and those formulations even also follows first‑order with Higuchi model. The present study indicates that the 1 and 2% concentrations of polymer is able to control the release of drug from the formulations but that is less effective to control the release in comparison of 3% and 4% concentrations of polymer.

The vaginal films were successfully prepared with solvent evaporation method for controlled release of drug. The developed films were evaluated by FTIR and for parameters like drug content, viscosity, surface pH, thickness, mechanical characterisation, in vitro drug release study and other. FTIR results confirm that there is no chemical interaction between drug and stabilisers/excipients. The batch variation is not more than 5% for average thickness and weight of the films. The surface pH studies of the formulations conclude that all the films are almost weak acidic in nature. FLZF1 showed high drug content (94.48±0.54) whereas FLZF4 showed low drug content (72.32±0.18). Viscosity of the formulations increased with the increase in concentration of polymer. Mechanical characterisation shows that tensile strength and percentage elongation of the films improves as degree of substitution of the polymer increases, but the values of modulus decreases which confirms that all the prepared films are soft in nature. The in vitro study is indicating that the 1% and 2% concentrations of HPMC are the least concentrations to control the release of drug whereas the 4% concentration of HPMC is a good and more effective concentration to control the release. FLZF1 releases the drug by following anomalous transport whereas other film formulations release the fluconazole by following Fickian diffusion mechanism. Prepared vaginal films may be an important alternative for the treatment of vaginal candidiasis, because these prepared films suggest the benefits of controlled release of fluconazole at the site of absorption.