Preparation and characterization of 125 I labeled bovine serum albumin

Bovine serum albumin is a model protein, which has been conventionally used as protein standard and in many areas of biochemistry, pharmacology and medicine. Radioiodination procedure for bovine serum albumin employing chloramine-T as an oxidant with slight modification was evaluated critically to establish the optimal conditions for the preparation of radiolabeled tracer ( 125 I-BSA) with required specific activity without impairing the immune reactivity and biological activity. Optimized radioiodination procedure involving 10 µg of chloramine-T along with 20 µg of sodium metabisulphite with 60 seconds incubation at 2° yielded 125 I-BSA with high integrity.

Serum albumin is the most abundant globular protein in the plasma and synthesized by the liver using dietary proteins. The physiochemical properties and structure of serum albumin is well studied and hence it serves as a model protein for several researchers [1-3]. Radioiodinated bovine serum albumin (BSA) is used in many areas of biochemistry, pharmacology and medicine. 125I-BSA has been used conventionally in the tannin precipitation studies [4]. Hence, a well-standardized procedure for the preparation of radioiodinated BSA could be useful for a variety of studies involving in vitro quantification.

Although several methods for labeling 125I are available, radioiodination employing chloramine‑T method is the most common method to introduce a radioactive atom into a large biological molecule [5]. The reaction starts with radioactive iodide anion, which is then oxidized using chloramine‑T to a more reactive oxidation state. This reacts principally with aromatic groups in protein mainly phenolic tyrosine. The reaction is terminated when the reductant, sodium metabisulphite is added; specific advantage of this method is that the minimal damage caused to the protein. The present study deals with the optimization of conditions required for the radioiodination of BSA.

BSA of the RIA grade was purchased from Himedia, India. Na125I in sodium hydroxide was from BARC, India. Chloramine‑T (N‑chloro‑p‑toluene‑sulfonami de, salt trihydrate), sodium metabisulfite (MBS) and potassium iodide were purchased from Merck, India. Sephadex G‑75 was purchased from Sigma Chemical Company, USA. All other chemicals used were of AR or GR grade. The equipments used in the study included a single well manual gamma counter (ECIL, India) and a multi‑well gamma counter (Stratec, Germany).

Radioiodination was performed in a well‑ventilated fume hood. The labeling procedure involved preparation of BSA at a concentration of 1 mg/ml, chloramine‑T at 1 mg/ml, sodium metabisulphite at 1 mg/ml and potassium iodide at 5 mg/ml in 0.05 M phosphate buffer, pH 7.4. The experiment was carried out in two phases: (1) Optimization of reagent concentrations, and (2) Optimization of incubation conditions (temperature and incubation time) followed by the determination of the radioiodination yield, specific activity and radiochemical purity. For studies involving optimization of reagent concentrations, chloramine‑T and sodium metabisulphite was added in three combinations, which are as follows: a) 5 μg (5 μl) of chloramine‑T and 15 μg (15 μl) of MBS, b) 10 μg (10 μl) of chloramine‑T and 15 μg (15 μl) of MBS and c) 10 μg (10 μl) of chloramine‑T and 20 μg (20 μl) of MBS. The overall radioiodination procedure involved addition of 50 μl of 1 M phosphate buffer, pH 7.4, 0.3 mCi of Na125I (in order to target 125I‑BSA with a specific activity of 30 μCi/μg) followed by the addition of 10 μl of BSA. The radioiodination reaction was initiated by the addition of chloramine T. The iodination reaction was allowed to proceed for 60 seconds with gentle stirring. The iodination reaction was terminated by the addition of 1 ml of 0.05 M phosphate buffer pH 7.4 followed by MBS. At the end of the reaction 250 μg (50 μl) of potassium iodide was added as a carrier.

Radioiodination yield of reaction mixtures was analyzed using paper electrophoresis. The reaction mixture along with a small quantity of potassium iodide was adjusted to counts of approximately 80 000 to 1 00 000 CPM and 2 μl was spotted on the negative end of the Whatman 3 mm chromatography paper strip (2×30 cm). Electrophoresis was carried out at constant voltage gradient of 150 volts for 45 min with 0.025 M phosphate buffer, pH 7.4 as the tank buffer. During electrophoresis labeled protein remains at the site of the application whereas free iodide (I¯) migrates towards the opposite end of spotting. Strips were dried, cut into 1 cm and counted in a multiwell gamma counter calibrated for 125I. Percent radioactivity associated with each peak after plotting graph was calculated and percentage yield was determined as follows, percentage yield=(counts at the point of spotting/total activity counts)×100.

Specific activity is the activity per unit mass. This is usually expressed in mCi/mg or μCi/μg. Specific activity was calculated from the percentage yield obtained in the paper electrophoresis method, which is as follows, specific activity=(percentage yield×amount of activity take for radioiodination)/amount of BSA taken for radioiodination. The reaction mixture giving highest yield was purified using Sephadex G‑75 pre‑equilibrated with 0.05 M phosphate buffer, pH 7.4. The column was eluted at a flow rate of 8 drops/min. one millilitre fractions were collected in each tube and counted with changed geometry for 10 s in a single well manual gamma counter. The fractions corresponding to the purified protein was pooled and paper electrophoresis was carried out. The pooled fractions were then adjusted to appropriate counts and dispensed as aliquots and stored at –20° until further use.

Radiochemical purity (RC purity) is the fraction of the total radioactivity associated with 125I‑BSA. RC purity was determined using the same method as above but purified and pooled fractions present in the BSA peak after the radioiodination of the antibody were used instead of reaction mixture. RC purity was calculated as follows, radiochemical purity=(counts at the point of spotting/total activity counts)×100.

Although chloramine‑T is a mild and widely used oxidant for radioiodination, critical evaluation of the reaction condition is necessary to prevent the damage to the protein caused during labeling. The yield of the labeled protein determines its specific activity and thus efficiency of immunoreactivity. Standardisation of the oxidant, chloramine‑T and the reductant, sodium metabisulphate concentration are critical because damage to the radiolabeled peptide could be minimized without compromising on the yield. Varying concentration of chloramine‑T and sodium metabisulphate studied showed differences in the yield of the radioiodinated protein. The highest yield was obtained (i.e. 60.52%) at a concentration of 10 μg of chloramine‑T and 20 μg of MBS (fig. 1). The concentration of chloramine‑T and MBS of 10 and 20 μg chosen for the studies were further optimized with different incubation timings as shown in the fig. 2. The maximum yield was obtained at 60 seconds (71%). When the incubation timings were increased further the yield reduced which may be due to the damage caused to the BSA protein during labeling. Effect of temperature was also studied on the radioiodination yield i.e. at 28° and 2° and it was seen that the reaction when performed at lower temperature (2°) gave yield of 75% (fig. 3). 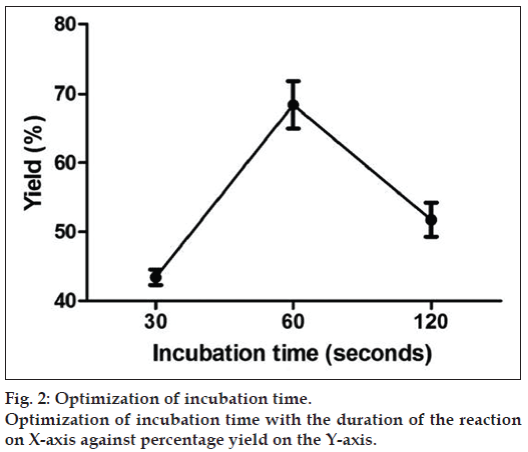 The optimization condition was chosen and the reaction mixture was prepared. Ideally, the reaction mixture of the protein after radioiodination yields two peaks as depicted in fig. 4. The first peak corresponds to the labeled protein and the second peak corresponds to the unreacted iodide and other impurities. The fractions were collected and the yield, specific activity and radiochemical purity of the pooled fraction was determined. The yield was calculated to be around 90%. Specific activity was calculated to be 27 μCi/μg. Radiochemical purity was not less than 95%. 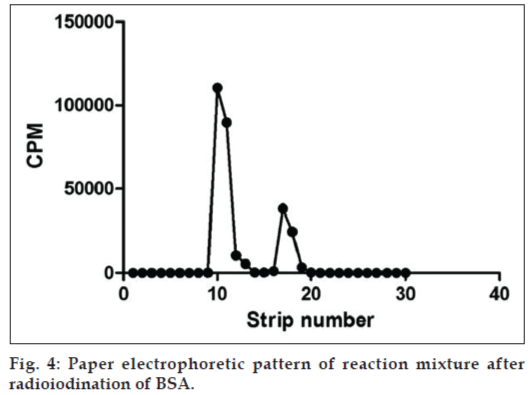 Although several methods are available for labeling 125I to proteins, chloramine‑T still remains the best method due to reproducibility, rapidity, efficiency of the iodination in the absence of carrier nonradioactive iodine, and avoidance of extremes of pH or organic solvents, which may denature the protein [6]. The specific use of chloramine‑T as a limiting reagent resulted in molecules with appropriate immunological and biological performance [7].

The reagent concentration for radioiodination of BSA was optimized by changing the concentration of chloramine‑T and sodium metabisulphite. Studies have indicated that increasing the concentration of chloramine‑T during radioiodination usually leads to an increase in the proportion of iodine incorporated into high molecular weight material and at the same time effects dissociation of the subunit structure of the protein [8]. The damage caused due to radioiodination was experimentally proved by isoelectric focusing studies [9]. When conditions for reagent concentration was optimized, ideally for every one molecule of oxidant two molecules of reductant is needed to stop the reaction. The result was consistent with the previous radioiodination techniques studied for different protein molecules. It was demonstrated that when incubation time was increased it resulted in damage to the protein. The damage might have caused probably due to increased time of exposure of active iodide species with the protein. Studies on the effect of temperature gave yield of 75% when the reaction was performed at 2°, which is supported by the conclusion that at ambient temperature labeled BSA is in an aggregated form which lowers the iodination yield at low temperature [10].