Preparation and characterization of ethosomes for topical delivery of aceclofenac

The aim of present study was to prepare and characterized ethosomes of aceclofenac which may deliver the drug to targeted site more efficiently than marketed gel preparation and also overcome the problems related with oral administration of drug. The formulations were prepared with varying the quantity of ethanol 10-50% (v/v), lecithin 1-4% (w/v), propylene glycol 5-20% (v/v) and evaluated for their vesicle size, shape and surface morphology, entrapment efficiency and in vitro drug permeation study. Ethosomes of average size of 1.112 μm with a spherical shape bearing smooth surface were observed by transmission electron microscopy and surface electron microscopy. The maximum entrapment of ethosomes was 91.06±0.79%. Cumulative amount of drug permeated through the biological membrane was found to be in the range of 0.26±0.014 to 0.49±0.032 mg/cm 2 . Stability profile of prepared system was assessed for 45 days and the results revealed that very less degradation of drug was observed during storage condition.

Antiinflammatory drugs are a heterogeneous group with differing chemical and physical properties. The first choice of treatment for most patients is non steroidal antiinflammatory drugs (NSAIDs) [1], aceclofenac is one of them, mainly used for the treatment of rheumatoid arthritis and osteoarthritis [2]. In some comparative studies of joint diseases, there was a tendency for aceclofenac to be better tolerated than diclofenac or ketoprofen with fewer patients being withdrawn from treatment due to gastric intolerance [3]. The patient treated with oral administration of aceclofenac suffers from various side effects, such as gastrointestinal ulcer and anemia due to gastrointestinal bleeding. Transdermal application of aceclofenac, as an alternative route of administration has demonstrated better to sort-out these problems, and it was speculated that topical administration of aceclofenac may increase the patient compliance and a possibility for continuous transdermal absorption of drug in controlled manner [4]. Currently, no drug delivery system is available as ideal to attain all the desired goals, but sincere efforts can be made to accomplish them through novel strategies in drug delivery. Apart from this numbers of novel drug delivery systems have been reported for various routes of administration, to achieve local and systemic drug delivery in controlled manner, whereas lipidic vesicular drug delivery systems such as liposomes, niosomes, transfersoms, and pharmacosomes were also developed for topical/transdermal administration of drug molecules [5].

The vesicular approach i.e. liposome in transdermal drug delivery system has been studied for many purposes but the unstable nature limits their use at clinical and industrial levels. In order to increase the stability of liposomes concept of proliposomes has been proposed. But because of poor skin permeability, breaking of vesicles, leakage of drug, aggregation and fusion of vesicles, these systems are not much successful for effective transdermal drug delivery [6].

Recently an innovative flexible vesicular system, ethosomes has been developed for topical/ transdermal delivery of a drug. This system has wonderful property to permeate intact through the human skin due to its high elasticity properties, which has an immense consequence for design of carrier system to be applied topically both for local and systemic delivery of hydrophilic and lipophilic drugs [7].

Dayan and Touitou (2000) compared the ethosomal system and classic liposomal system of trihexyphenydyl HCl and found that ethosomes dramatically enhanced the skin permeation of trihexyphenydyl HCl in vitro [8]. Further transdermal delivery system for cannabidiol by using ethosomal carrier was also designed by Lodzki and colleagues (2003) [9]. Again Godin and Touitou (2004) investigated the dermal and intracellular delivery of bacitracin from ethosomes [10]. After that Elasayed et al. (2006) studied the mechanism by which ethosomes can improve skin delivery of ketotifen under nonocclusive conditions [11,12].

Ethosomes were prepared as reported by Touitou et al. (2000) [13]. In brief the lecithin (1-4% w/v) was taken in a small round bottom flask and solubilized with ethanol (10-50% v/v) containing drug under mixing with a magnetic stirrer. The round bottom flask was covered to avoid ethanol evaporation. Distilled water was added slowly with continuous stirring to obtain the ethosomal colloidal suspensions. The final suspension of ethosomes was kept at room temperature for 30 min under continuous stirring. Formulations were stored in the refrigerator and evaluated for vesicle size, vesicular shape, surface morphology, entrapment efficiency, in vitro drug permeation study and stability study.

Size and size distribution were determined by dynamic light scattering (DLS) using a computerized inspection system (Malvern Zetamaster ZEM 5002, Malvern, UK). Surface morphology was determined by TEM, for TEM a drop of the sample was placed on a carbon-coated copper grid and after 15 min it was negatively stained with 1% aqueous solution of phosphotungustic acid. The grid was allowed to air dry thoroughly and samples were viewed on a transmission electron microscopy (TEM, FEI-Philips Tecnai 10). Scanning electron microscopy (SEM) was also conducted to characterize the surface morphology of the ethosomal vesicles for which a drop of ethosomal system was mounted on clear glass stub, air dried and coated with Polaron E 5100 Sputter coater (Polaron, UK) and visualized under Scanning Electron Microscope (SEM Leo 430, England).

The in vitro permeation study was carried out by using modified Franz diffusion cell with egg membrane. The study was performed with phosphate buffer saline (pH 7.4). The formulation was placed (equivalent to 2.5 mg of drug) on the upper side of skin in donor compartment. The temperature of the assembly was maintained at 37±2°. Samples were withdrawn after every hour from the receptor media through the sampling tube and at the same time, same amount of fresh receptor media was added to make sink condition. Withdrawn samples were analyzed for aceclofenac constant using UV/Vis spectrophotometer.

Optimized ethosomal formulations were selected for stability study. Formulations were stored at 4±2°, 8° and at room temperature. Percent drug entrapment was determined at different time intervals (1, 15, 30 and 45 d).

In the present work, ethosomal formulation to enhance transdermal permeation of aceclofenac, was prepared and evaluated. Colloidal suspensions of ethosomes were prepared by reported method. Ethosomal system was found to be easy to prepare and composed mainly of phospholipids and ethanol, compounds commonly found in pharmaceutical preparations.

The average vesicle size of optimized formulations determined by Malvern Zetamaster was 1.112±0.053 µm. TEM photographs showed the surface morphology of the ethosomes as well as existence of unilamellar vesicular structure (fig. 1). The smooth surface of vesicles was confirmed by SEM (fig. 2). Increase in propylene glycol concentration decreases the entrapment of drug in formulations. Percent entrapment of ETP1 and ETP4 formulations was found to be 90.11±0.1% and 68.31±0.90%, respectively. The results revealed that as the concentration of permeation enhancer increased, the fluidity of bilayer also increased causing the drug to leach out from vesicles. 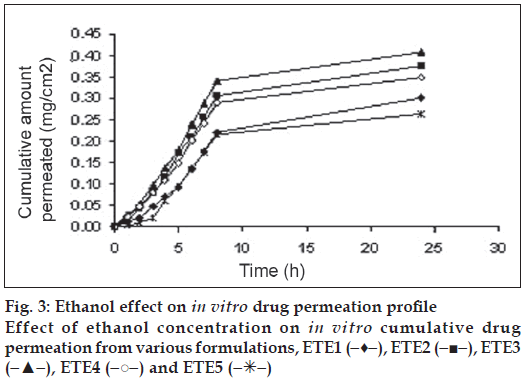 As the lecithin is the main component of ethosomal system play important role in formulation. In present study the effect of lecithin concentration on drug permeation was also evaluated to optimize the formulation for sustained release properties on system. In prepared ethosomal system, as the concentration of lecithin increased above 2%, permeation of drug decreased from 0.42±0.022 mg/ cm2 due to decrease in the bilayer deformability of vesicles (fig. 4). 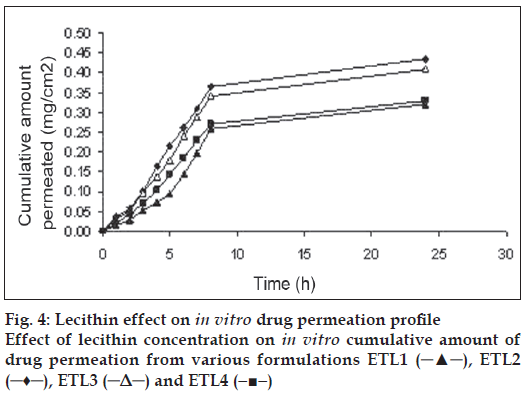 Variation in propylene glycol concentration also influenced the amount of drug permeated. The cumulative amount of drug permeated was maximum (formulation ETP2) 0.49±0.032 mg/cm2 and minimum for (formulation ETP4) 0.27±0.080 mg/cm2 (fig. 5), due to propylene glycol shows synergistic effect with ethanol but above 10 % there is disruption of vesicles. 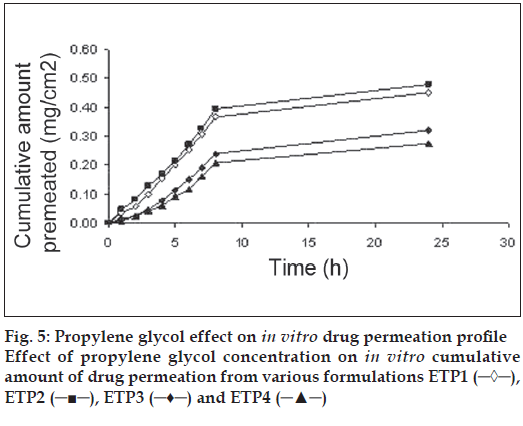 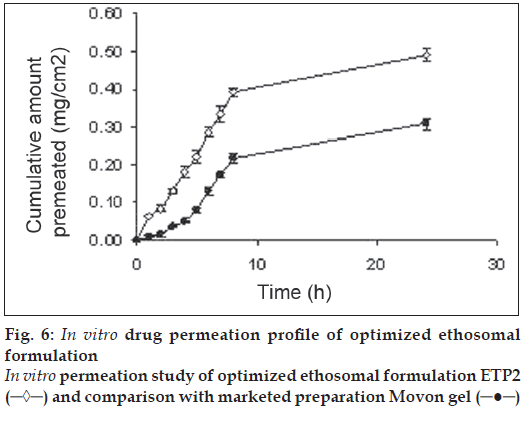 Table 3: Stability of Vesicles on Storage

These flexible vesicles may become a promising carrier for the transdermal delivery of aceclofenac. It helps in reducing the dose of drug applied topically. The data presented here suggest the possibility of substituting systemic treatment of osteoarthritis and rheumatoid arthritis with local treatment. This would result in decreased gastrointestinal associated side-effects, thereby potentially increasing patient compliance. 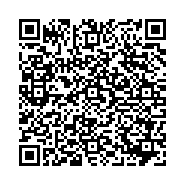