In the present study, interpenetrating polymeric network hydrogels of glipizide were prepared using gelatin and methacrylic acid. Methacrylic acid was polymerized using potassium persulfate. Methacrylic acid was crosslinked with methylene bisacrylamide and gelatin was crosslinked using glutaraldehyde. Four formulations were prepared by varying the concentrations of methacrylic acid, methylene bisacrylamide and glutaraldehyde. The amounts of gelatin and potassium persulfate were kept constant in all the formulations. The interpenetrating polymeric network hydrogels were characterized by fourier transform infrared analysis, differential scanning calorimetry and evaluated for swelling and deswelling properties, drug loading and in vitro drug release. All the formulations showed no interaction between drug and polymer as confirmed by fourier transform infrared analysis and differential scanning calorimetric studies. The interpenetrating polymeric network hydrogels swelled only in alkaline pH and swelling was minimal in acidic pH. It was found that as the concentration of cross-linking agents is increased, there is a decrease in swelling and, as the concentration of methacrylic acid is increased, there is an increase in swelling. The release data shows that, as the concentration of methacrylic acid was increased, swelling increased resulting in increased release of the drug.

Interpenetrating polymer networks (IPNs) are defined as a combination of two polymers in network form, at least one of which is synthesized and/or crosslinked in the immediate presence of the other. Stimuli-responsive polymers, which can reversibly swell or shrink in response to external conditions, such as temperature, pH, solvent composition, electrical field and light are of great interest, especially in biomedical and pharmaceutical technology. Among them, pH-sensitive hydrogels that change properties by depending upon changes in medium pH have been extensively investigated for the development of new drug delivery systems. These gels can be prepared by the incorporation of one or more weakly acidic or basic monomers such as carboxylic acids (acrylic acid, methacrylic acid) and primary or substituted amines (N,N--dimethylaminoethyl methacrylate). Acidic gels are considered as good candidates for oral colon specific delivery of drugs that are susceptible to enzymatic degradation in the upper gastrointestinal tract. While those kinds of systems have slow equilibrium degree of swelling in acidic medium of stomach, their swelling degree increases as it passes down the gastrointestinal tract due to an increase in pH. Thus, this pH-sensitive drug delivery system protects the drug from the acidity of stomach and releases the entire drug in the colon. Hydrogels are three- dimensional, hydrophilic, polymeric networks capable of imbibing large amounts of water or biological fluids. Their major disadvantage (i.e., their relatively low mechanical strength) can be overcome by formation of IPNs [1-3]. A pH-sensitive acrylic IPN hydrogel using N-isopropylacrylamide and Naminopropylmethacrylamide, crosslinked with methylene bisacrylamide was prepared by Lorenzo, C.A. et al. These IPN hydrogels showed pH-responsive swelling and swelled more in pH 7.4 compared to pH 1.2 [4]. Ionisable IPNs have been reported to be prepared from poly(acrylic acid) and poly(vinyl alcohol) using glutaraldehyde and ethylene glycol dimethacrylate as crosslinking agents, which showed pH-sensitive swelling properties and release [5]. IPN hydrogels have also been reported to be prepared from chitosan and poly(acrylic acid) using glutaraldehyde and methylene-bis-acrylamide as crosslinking agents, which also showed pH-sensitive swelling [6]. There were no reports on IPN hydrogels as pH-sensitive delivery system for glipizide. The objective of this study is to prepare IPN hydrogels of glipizide employing gelatin and methacrylic acid as monomers and glutaraldehyde and methylene bisacrylamide as crosslinking agents. Glipizide, an effective antidiabetic, which requires controlled release owing to its short biological half-life of 3.4±0.7 h, was used as the drug in this study [7].

IPN hydrogels containing glipizide were prepared by using gelatin and methacrylic acid. Methacrylic acid was polymerized to poly(methacrylic acid) by free radical polymerization process using potassium per sulfate, as a free radical polymerization initiator. Glutaraldehyde was used as crosslinking agent for gelatin and methylene bisacrylamide was used as crosslinking agent for poly(methacrylic acid) [8,9]. Drug was dispersed in 5% w/V gelatin solution, which was previously prepared by adding gelatin to water preheated to 50º. To this, at room temperature, methacrylic acid, potassium per sulphate, methylene bisacrylamide and glutaraldehyde were added and stirred for 15 min. The solution obtained was then poured into Petri dish and kept overnight for crosslinking at room temperature. The crosslinked hydrogel obtained was then cut into 1×1 cm2 pieces and dried for 24 h at 40º under vacuum. The dried IPN hydrogels were crushed and passed through sieve No.60/85. The IPN hydrogels retained on sieve No.85 were taken for further studies. The formulae of the prepared IPN hydrogels are listed in Table 1.

Glipizide content in the IPN hydrogels was estimated by an UV spectrophotometric method based on the measurement of absorbance at 276 nm in pH 7.4 phosphate buffer [10]. The method was validated for linearity, accuracy and precision. The method obeyed Beer’s law in the concentration range 5-30 μg/ml. When a standard drug solution was assayed repeatedly (n=6), the mean error (accuracy) and relative standard deviation (precision) were found to be 0.6% and 0.8% respectively.

The prepared IPN hydrogels were subjected to FT-IR analysis by KBr pellet method using Fourier-Transform Infrared (FT-IR) spectrophotometer, (Perkin Elmer, Spectrum-100, Japan). This was employed to ascertain the compatibility of drugs with the excipients.

In vitro drug release from the IPN hydrogels was carried out in triplicate at 37±0.1° in a USP XXII dissolution apparatus type II (Six basket dissolution tester-USP XXII, TDT-08L, Electrolab, Mumbai) at a rotation speed of 50 rpm as prescribed for glipizide tablets in USP XXIV [12]. A sample of IPN hydrogels equivalent to 20 mg of glipizide was used in each test. Drug release from the IPN hydrogels was studied in 900 ml of dissolution medium (2 h in 0.1 N hydrochloric acid solution and 10 h in pH 7.4 phosphate buffer). Samples of dissolution fluid were withdrawn through a filter (0.45 μm) at every hour and were assayed at 276 nm for glipizide content using a Shimadzu UV-1601 double beam spectrophotometer. The release data obtained was fitted into korsmeyer-peppas equation, log%R=logK+nlogt, where R is the amount of drug released in given time t, K is the release rate constant and n is the time exponent. A graph of log%R v/s logt was plotted. The intercept on Y-axis gave the value of K, the release rate constant and the slope gave the value of n, the time exponent. To determine the release mechanism, the parameters n and k were used. Figure 1: Fourier transform infrared spectra of IPN hydrogels. FT-IR spectra of glipizide (a) and its hydrogel formulation (b)

From the differential scanning calorimetry thermograms (fig. 2), it was observed that a sharp endothermic peak at 208.93° was seen for glipizide (corresponding to its melting point) as well as for its formulation. Since the peaks are identical, it proves that there is no chemical interaction between the drug and the polymers employed in the preparation of IPN hydrogels. 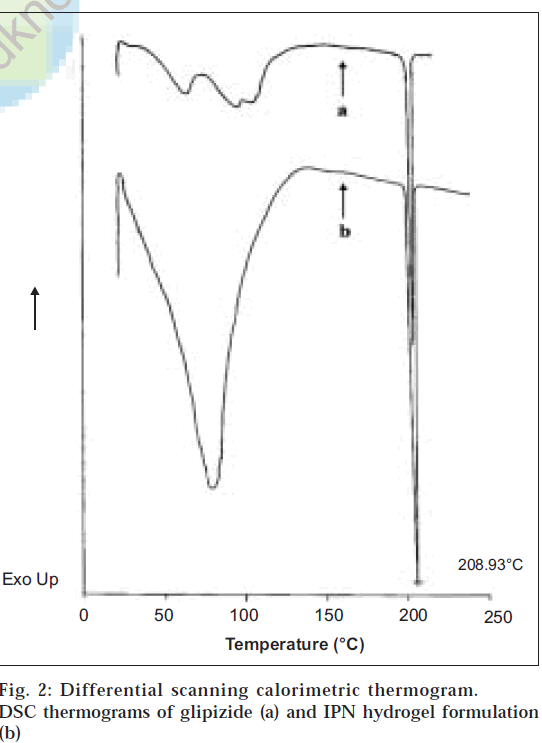 The swelling studies for IPN hydrogels (without drug) were carried out in both acidic pH and basic pH media to check its pH sensitivity. The results of the swelling studies are shown in fig. 5. The results indicate that with an increase in pH from acidic to basic, a considerable increase in swelling was observed for all the four IPN hydrogel formulations. The presence of methacrylic acid increases the swelling of the polymer in basic solutions and collapses in acidic solutions. This increase in percentage swelling is due to the dissociation of the carboxyl groups of methacrylic acid, thereby increasing the osmotic pressure inside the IPN hydrogels resulting in increased swelling. This is due to the electrostatic repulsion between carboxylic acid polymers side chain and ions present in the buffer solution. At high pH values, the carboxylate side chains are repelled by the ions in the solution and minimize the charge concentration by expanding. Swelling mainly depends upon the extent of crosslinking. At lower crosslink density, the network is loose with a greater hydrodynamic free volume, so that the chains can accommodate more of the solvent molecules resulting in higher swelling. 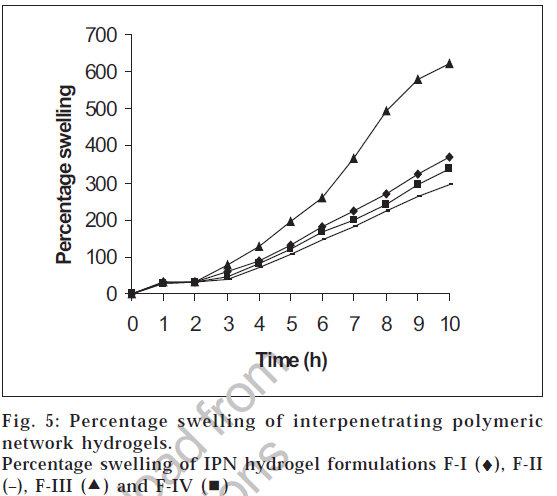 The results of the drug release study are shown in fig. 6. Glipizide release was seen only in pH 7.4 phosphate buffer and was found to be dependent on the concentration of methacrylic acid, glutaraldehyde and methylene bisacrylamide used. The drug release in 0.1 N hydrochloric acid solution was found to be low (less than 2%) in all the cases. This can be attributed to the fact that the swelling of the IPN hydrogels in acidic pH is low. In pH 7.4 phosphate buffer, the release was found to increase with time, since, in alkaline pH, the IPN hydrogels show higher percentage of swelling. At the end of 12 h, the percent release of glipizide varied greatly from 65.21% to 97.5% for the four formulations. Among all the formulations, F-III showed almost complete release over a period of 12 h. The order of increasing release of glipizide observed with various IPN hydrogel formulations was F-II<F-IV<F-I<F-III. This release of drug was found to be directly proportional to the extent of swelling. Higher the percentage swelling more is the drug release. The best fit model was found to be korsmeyer-peppas model. Since the value of n, the time exponent, calculated from korsmeyer-peppas equation was found to be greater than 1 in all the drug release profiles, the release mechanism is assumed to be super case-II transport, wherein multiple release mechanisms exist [13]. 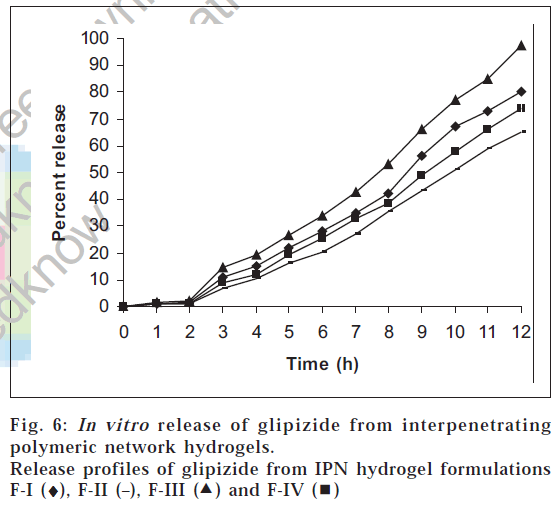 We thank the J. S. S. Mahavidyapeetha, Mysore and Dr. B. G. Nagavi, Principal, J. S. S. college of Pharmacy, Mysore for their valuable support to carry out this research.