Preparation and evaluation of gels from gum of Moringa oleifera

The present study was undertaken with an objective to find out the gelling potentials of a natural gum obtained from plant Moringa oleifera . The gum was extracted by using water as solvent and precipitated using acetone as non-solvent. Physical characteristics such as, solubility, swelling index, loss on drying, and pH were studied. Diclofenac sodium was used as model drug for the formulation of gels. Seven batches of drug loaded gels with concentration of mucilage ranging from 5.5, 6.0, 6.5, 7.0, 7.5, 8.0, and 8.5 were formulated by using glycerin as plasticizer and methyl paraben as preservative. The pH, viscosity, and in vitro diffusion profiles were studied. The gels prepared with 8.0% of mucilage were found to be ideal and comparable with a commercial preparation.

The gum in the present study is an exudate from the stem of the tree Moringa oleifera. The gum is initially white in color but changes to reddish brown or brownish black on exposure. It is sparingly soluble in water but swells in contact with it giving a highly viscous solution. It is a polyuronide consisting of arabinose, galactose, and glucoronic acid in the proportion of 10:7:2 mole; rhamnose is present in traces [1]. There are several reports about the successful use of hydrophilic plant polymers as tablet binders, emulsifiers, and gelling agents, suspending agents, stabilizers, and thickeners. When the gum mucilage is mixed with water, a protective soothing preparation results, which when applied externally will protect lesion or ulcer, from environmental contamination, infection, and sepsis [2]. Hence, in the present study the gelling behavior of Moringa oleifera (Oriya-Sajina, Bengali-Sajina, Tamil-Moringai) gum was selected for evaluation and change in color of the gum was investigated for the possibility of oxidation.

The gum was collected locally from the trees. Diclofenac sodium was obtained as gift sample from Ajanta Pharma, Mumbai. All other materials, solvents, and reagents were of analytical grade.

The gum was collected from trees (injured site). It was dried, ground, and passed through seive no 80. Dried gum (10 g) was stirred in distilled water (250 ml) for 6-8 h at room temperature. The supernatant was obtained by centrifugation. The residue was washed with water and the washings were added to separated supernatant. The procedure was repeated four more times. Finally the supernatant was made up to 500 ml and treated with twice the volume of acetone by continuous stirring. The precipitated material was washed with distilled water and dried at 50-60° under vacuum.

Samples of fresh gum containing 2 ml of 2% w/v gum with 1 ml of 0.1% ascorbic acid and 1 ml of 0.1% sodium bisulfite as antioxidant were prepared in duplicate. Both the samples were poured on Petri dishes and exposed to sunlight as well as kept in dark along with controlled samples without any antioxidant for a period of 12 h. After 12 h they were observed for change in color.

The physicochemical properties such as solubility, swelling index, loss on drying were determined according to Indian Pharmacopoeial Procedures [3]. The pH of the mucilage was determined using a digital pH meter (Elico, Hyderabad) (Table 1).

Gels were prepared by using different concentrations of mucilage, drug, methyl paraben (preservative) and glycerin (plasticizer), as shown in Table 2 and stored in cool place until further use.

‘ND’ not determined, Composition of different formulations with their pH values and viscosity

Release of diclofenac sodium from various gel formulations (B5, B6, B7 and the commercial preparation Naclogel, Natco, Hyderabad) were studied employing the permeation apparatus as described Fites et al. [4] A glass cylinder with both ends open, 10 cm height and 3.7 cm outer diameter was used as a permeation cell. A cellophane membrane (0.8 μm pore size, cut to suitable size, boiled in distilled water for 1 h and soaked in phosphate buffer of pH 7.4) was fixed to one end of the cylinder by adhesive tape. One gram of the prepared gel was taken in the cell (donor compartment) and the cell was immersed in a beaker containing 100 ml of phosphate buffer of pH 7.4 (receptor compartment). The cell was immersed in to a depth of 1 cm below the surface of buffer, which was agitated by a magnetic stirrer and the temperature was maintained at 37° ± 1° throughout the experiment. Aliquots were withdrawn from the receptor compartment periodically (0.5, 1, 1.5, 2, 3, 4, 6, and 8 h).

After each withdrawal, the volume of liquid in the receptor compartment was replaced by phosphate buffer of pH 7.4. The drug concentration was determined spectrophotometrically at 285 nm.

Stability testing was done by using freeze thaw cycling method, the temperature was altered every 24 hour between 25° and -5° for five cycles and samples were observed for physical stability and synersis (spontaneous contraction of gel exuding some of the fluid medium).

Guinea pigs (400-500 g) of either sex were used for testing of skin irritation. The animals were maintained on standard animal feed and had free access to water. The animals were kept under standard conditions. Hair was shaved from back of guinea pigs and area of 4 cm2 was marked on both the sides, one side served as control while the other side was test. Gel was applied (500 mg/ guinea pig) twice a day for 7 d and the site was observed for any sensitivity and the reaction if any, was graded as 0, 1, 2, 3 for no reaction, slight patchy erythema, slight but cofluent or moderate but patchy erythema and severe erythema with or without edema, respectively.

Stem exudates of Moringa oleifera yielded 64% of gum when acetone was used for precipitation of the gum. The investigation for color change revealed that the presence of antioxidant does not prevent color change, where as change in color was found to be more intense with samples exposed to sunlight. The physicochemical properties of gum were determined and are shown in Table 1. The gelling concentration of the gum was found to lie between 7 and 8.5% w/v but better gel characteristics were observed at the concentration of 8%. The pH of the gum was below 5.77, which is ideal for topical application. Seven batches of gel were prepared corresponding to 5.5, 6.0, 6.5, 7.0, 7.5, 8.0, and 8.5% w/w of Moringa oleifera gum, 1% w/w of diclofenac sodium, 0.2% w/w methyl paraben as preservative and 10% w/w glycerin as plasticizer. The pH values of those batches were determined. There was no significant difference in pH between pure gum solution and the different batches of gels formulated. Hence the gels were ideal for topical application. Among the prepared gels the batch containing 8% gum had brownish color without any characteristic odor and pH of 5.77. Therefore this was considered as ideal batch. The gels exhibited psedoplastic flow (shear thinning) the viscosity was found to be ideal for topical application. The stability of the gel was determined by freeze thaw cycling method. The study revealed that the gel formulations containing 7.5, 8.0, and 8.5% w/w of gum were physically stable and synerisis was not observed where as other formulations showed synerisis. Hence these three formulations were considered for in vitro diffusion study along with a marketed formulation. Skin irritation study revealed no sensitivity reaction.

The In vitro diffusion profiles of diclofenac sodium from the gels containing different concentrations of Moringa oleifera gum are shown in fig. 1. All the gels showed only slight difference in release profile, the gel prepared with 8.0% gum showed a maximum release of 62% over a period of 8 h. Hence this was considered as ideal batch for comparison with marketed preparation. The release profile of ideal batch and the marketed formulation were identical over a period of 8 h diffusion study. 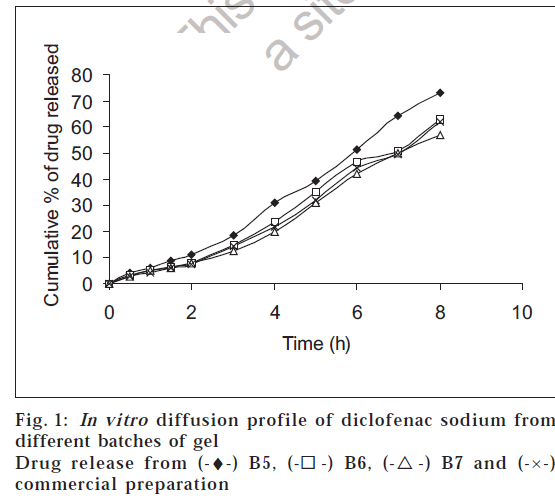 Figure 1: In vitro diffusion profile of diclofenac sodium from different batches of gel Drug release from (-♦-) B5, (-

The in vitro diffusion profile data of the gel formulations were fitted according to the well-known exponential equation given below [5], which is often used to describe the release behavior from polymeric systems.

The equation used was Mt/M∞ = k tn, where Mt/M∞ is the fractional release of the drug, ‘t’ is the release time, ‘k’ is constant incorporating the structural and geometric characteristic of the release device (gel) and ‘n’ is the release exponent indicative of the mechanism of release. Table 3, shows an analysis of the diffusional release mechanism obtained by varying the n values [6]. The n values used for analysis of the drug release mechanism from tablets were determined from log (Mt/M∞) vs. log (t) plots, whose values are given in the Table 4.

Table 3: Variation of Release Exponent Values With Mechanism of Diffusion

‘n’ is the release exponent value, KH is the Higuchi rate constant and rH is the correlation coefficient