In the present investigation chitosan has been chemically modified by treating with two different aldehydes like acetaldehyde and propionaldehyde to form Schiff's bases. Schiff's bases of chitosan with acetaldehyde and propionaldehyde were named as polymer A and polymer B, respectively. Fourier Transform Infra Red (FTIR) spectral data have confirmed the reaction carried out on chitosan. Drug free polymeric films of chitosan, chemically modified chitosan and chitosan/hydroxypropylmethylcellulose blend were prepared and evaluated for various physicochemical characters. Further, the films were incorporated with anti-inflammatory drug, etoricoxib using glycerol as plasticizer. The drug loaded films were cross-linked with sodium citrate and studied for permeation characteristics across dialysis membrane and rat skin. All the films were evaluated for bursting strength, swelling index, moisture uptake, thickness uniformity, drug content uniformity, tensile strength, percent elongation at break, percent flatness, water vapour transmission rate and in vitro drug permeation study.

The polymeric technologies have been honed and refined over the past several years and currently great interest has been focused on the development of novel drug delivery systems [1]. Treatment of chronic diseases such as asthma, rheumatoid arthritis by transdermal route of drug administration might prove to have several advantages over other routes of drug administration [2]. Chitosan is a natural occurring polymer that exhibits biological properties such as nontoxicity, biocompatibility and low chemical reactivity. Chitosan is insoluble in water but soluble in acidic water. Films produced by casting chitosan solution when applied on the skin cause irritation due to the presence of traces of acid. Hence it is necessary to wash the films repeatedly to remove any traces of acid1. Etoricoxib is a nonsteroidal anti-inflammatory drug (NSAID) that exhibits antiinflammatory, analgesic, and antipyretic activities. Etoricoxib is a potent, orally active, highly selective cyclooxygenase-2 (COX-2) inhibitor within and above the clinical dose range [3]. In this study we report the possible usage of chitosan, chemically modified chitosan and chitosan/HPMC blend for transdermal drug delivery system of etoricoxib.

Solution of polymer A, polymer B, plain chitosan and chitosan/HPMC blend were prepared by dissolving in 1.0% w/v acetic acid solution, respectively. The above solution (15 ml) was poured into a petridish (44.15 cm2) precoated with polyureathane and kept in an oven at 40° for complete drying. Films produced were washed with 50% v/v ethanol to remove surface bound traces of acid. The dried films were removed from the petridish and stored in a desiccator until use (Table 1).

Evaluation of physical and mechanical properties of blank films

Solution of polymer A, polymer B, plain chitosan and chitosan/HPMC blend were prepared by dissolving 2 g of polymer in 100 ml of 1.0% w/v acetic acid solution. To the above prepared polymeric solution, 20% w/w, 30% w/w (with respect to dry weight of polymer) of glycerol followed by 20% w/w (with respect to dry weight of polymer) of etoricoxib was added and stirred for 30 min. Drug containing polymeric solution (22 ml) were poured into a petridish (44.15 cm2), precoated with polyureathane and kept in an oven at 40° for complete drying. Films produced were washed with 50% ethanol to remove surface bound traces of acid. The dried films were removed from the petridish and stored in a desiccator until use (Table 2).

*w/w of dry weight of polymer

Cross linking of films was done by dipping in a 10 ml solution of sodium citrate (10% w/v, adjusted to pH 5) for 1h. These films were washed with water to remove excess sodium citrate [9]. The drug loaded cross linked films were assigned code C1 to C8.

The diffusion cell was fabricated with the help of small funnel. The donor compartment was funnel of diameter 3.5 cm. The transdermal patch of area 1.5 cm2 was placed on dialysis membrane with aluminum foil as backing membrane, which was then tied to the diffusion cell. This diffusion cell was immersed in beaker (receptor compartment) containing 50 ml of phosphate buffer of pH 7.4 with methanol 50% v/v as diffusion media. The receptor compartment was stirred by using magnetic stirrer at 100 rpm and the whole assembly was maintained at 37±1°. The amount of drug release was determined by withdrawing 2 ml of sample at specific time intervals upto 12 hrs. The volume withdrawn was replaced with equal volume of fresh and pre-warmed (37°) phosphate buffer media containing methanol. The absorbance of the withdrawn sample was measured after suitable dilution at 235 nm to estimate etoricoxib. The experiment was carried out in triplicate and average value was reported [10].

The in vitro skin permeation studies were carried out using dorsal section of full thickness skin from albino rats (weighing between 200–250 g) whose hair had been removed on the previous day using electric clipper. The transdermal patches were firmly pressed on the centre of the rat skin. Once adhesion to the skin surface had been confirmed, the skin was quickly mounted on the diffusion tube which acted as the donor compartment. 50 milliliter of phosphate buffer of pH 7.4 with methanol 50% v/v as diffusion media was taken in a beaker, which acted as the receptor compartment to maintain the sink condition. The donor compartment was kept in contact with the receptor compartment and the receptor compartment was stirred magnetically during the study. After every 1 h, sample (2 ml) was withdrawn and replaced with 2 ml of fresh phosphate buffer pH 7.4 with methanol 50% v/v. The samples were then analyzed using UV spectrometer at 235 nm to estimate etoricoxib.

The free amino group of chitosan was reacted with aldehyde in presence of acid to form Schiff’s base. Aldehydes were selected based on their film forming capacity with the polymer. The percent aldehyde conversion and carbon chain length of the aldehyde, affected the film characteristics. The FTIR spectrum of plain chitosan, polymer A and polymer B was taken to confirm the modification of chitosan and stability of drug. Chitosan showed peak at 1637 cm-1 corresponding to amino groups. In contrast, after formation of imino group (-C=N-) a new peak appeared at 1541 cm-1 for polymer A and at 1558 cm-1 for polymer B (fig. 1). FTIR of pure etoricoxib and drug loaded membranes were also obtained to find out if there was any chemical interaction between drug and the polymer. Etoricoxib showed characteristic peak at 1143 cm-1 corresponding to sulphone groups (-S=O) and did not alter even after loading into the membrane, this confirms stability (no interaction) of the drug (fig. 2). FTIR of HPMC and chitosan/ HPMC blend were obtained to find out if there was any interaction between HPMC and chitosan. FTIR of drug loaded chitosan/HPMC blend film was also obtained to evaluate the chemical interaction between drug and chitosan/HPMC blend. Etoricoxib characteristic peak at 1143 cm-1 remained unchanged which confirmed the stability of drug. All the drug loaded films were found to be quite uniform in thickness. The percent flatness of drug loaded films was ideal (Table 3). All films showed an increase in moisture uptake with an increase in relative humidity. The increase in moisture uptake may be attributed to the hygroscopic nature of polymer-glycerol composite film. All the films showed increase in weight with time. The films with modified polymer showed low swelling index as compared to that of films with plain chitosan (Table 4). Different formulation showed different water vapour transmission rate. (Table 3). The bursting strength has linear correlation with increase in concentration of plasticizer (Table 3). It was noticed that formulation D8 showed highest tensile strength of 4.728 kg/ cm2 (Chitosan/HPMC blend with 30% glycerol) where as formulation D2 showed 4.258 Kg/cm2. Formulation D3 (modified with acetaldehyde with 30% glycerol) showed low tensile strength of 2.690 kg/cm2. Formulation D2, D4 and D8 showed highest percent elongation of 80% where as formulation D5 shows low percent elongation of 40%.

The selected formulations loaded with etoricoxib were subjected to invitro drug release. Invitro diffusion studies across dialysis membrane and rat skin was conducted using diffusion cell fabricated with the help of funnel and beaker assembly. 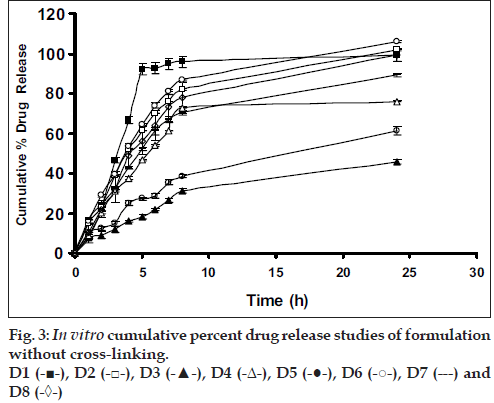 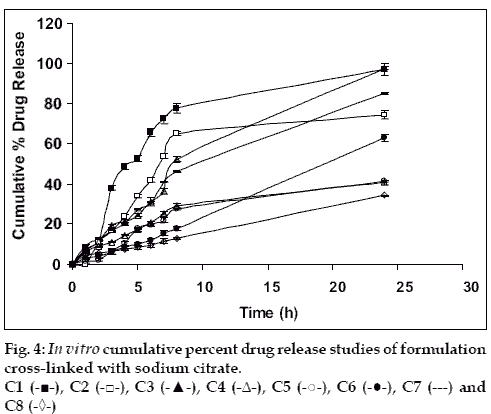 The data were subjected to first order equation and the regression value was found to be in the range of (R2 = 0.8825 – 0.9987) which confirm first order release pattern. Further to find out whether diffusion is involved in the drug release, the data was subjected to Higuchi’s equation. The lines obtained were comparatively linear (R2 = 0.8486–0.9765) suggesting the diffusion may be mechanism of drug release. To confirm further the release mechanism of drug, the data was subjected to Korsmeyer’s-Peppas equation. The release exponent ‘n’ value was determined, based on ‘n’ value it can be explained that incorporated drug release by the anomalous (Non-Fickian) type of diffusion, involving swelling of the polymer matrix, as is evident by the slope values of more than 0.5 but less than 1 for the plot of log cumulative amount release Vs log time (Korsmeyer’s-Peppas plot). Except in case of formulation C5 which showed Non-Fickian super case II (slope = 1.180). When the average rate constant of the formulation were studied, it was observed that formulation C8 showed comparatively lower rates of release of drug, the results are shown in Table 5. Among all the prepared films, C8 (chitosan/HPMC blend in the ratio of 75:25; cross-linked with sodium citrate) would be a better formulation based on the in vitro permeation studies as it released the drug in sustained release pattern for 24 hours without significantly releasing the drug in a burst manner in the initial hours. Among the non cross-linked formulation D3 would be a better formulation based on the in vitro permeation studies and first order rate constant.

The skin permeation studies were carried out using rat skin. The apparatus for the study was arranged in the same manner as for dialysis membrane permeation study. The results are shown in the Table 6. As done in previous experiment, the drug permeation data was plotted (fig 5) according to first order, Higuchi’s and Korsemeyer-Peppa equation to know the release mechanisms. The formulations showed the fair linearity with respect to first order (R2 = 0.9843–0.9138) and Higuchi’s equations (R2 = 0.9696– 0.9356) hence to confirm precisely the domination mechanism; the data was plotted according to Korsemeyer’s equation. The lines obtained were linear (R2 = 0.9461–0.9655), slope values vary between (0.6160 and 0.6792). 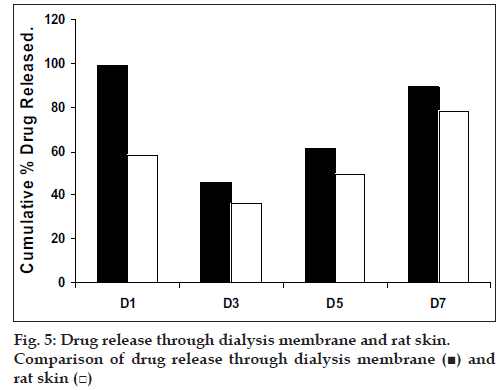 In conclusion, it has been observed that diffusion is dominant mechanism for drug release following Non-Fickian type of diffusion. Among all the prepared films, D3 would be better formulation based on the in vitro skin permeation studies as it sustained the release of drug for longer duration with out significantly releasing the drug in a burst manner in the initial hours. Hence the present study demonstrates that Etoricoxib transdermal patches could be successfully prepared using chitosan, modified chitosan and chitosan-HPMC blend.