Preparation of Evodiamine Solid Dispersions and Its Pharmacokinetics

However, EV has poor water solubility. The oral bioavailability of EV is estimated to be about 0.1% in the conscious rat system, and EV levels in feces are much higher than those in plasma. The data also indicates that a large amount of evodiamine is unabsorbed in the gastrointestinal tract [21]. Currently, EV as a new anticancer drug candidate is undergoing the pre-clinical stage of the research and development process. As poor water solubility and low bioavailability of EV are key problems to solve in order to educe an anticancer effect better in vivo, it is necessary to increase the drug solubility in the gastrointestinal tract, thus increasing the oral absorption of poorly water-soluble drug [22]. The solid dispersion (SD) technique, which has been widely used to improve the dissolution rate, solubility and oral absorption of poorly water-soluble drugs, is a method that can achieve a super saturation of drugs and improve their bioavailability [23-28].

In order to solve the aforementioned problems, EV solid dispersions were prepared by solvent method and shown to improve the solubility in vitro and the bioavailability in vivo in this study.

PVP K30 was purchased from Tianjin Tiantai Fine Chemicla Co., Ltd. (Tianjin, China). EV was purchased from the National Institute for the Control of Pharmaceutical and Biological Products (Beijing, China). Evodiae rutaecarpa were purchased from a pharmaceutical company in Hebei, China. HPLC-grade methanol was obtained from the Tianjin Concord Technology Co., Ltd. Deionized water (Milli-Q water system, Millipore Bedford, MA, USA) was used in the preparation of the samples and buffer solution. The other materials were of analytical reagent grade.

Extraction and purification of EV from Evodia rutaecarpa (Juss). Benth

The extraction conditions of Evodia rutaecarpa (Juss). Benth was added at 8 times the amount of 70% ethanol, with circumfluence distilling 3 times and 2 h each time. The extraction solution was filtrated and dried under reduced pressure. Then those extracts were added to 24 times the amount of water of pH 3 in the water precipitation process. These sediments were put in the aluminum oxide column. The chromatography conditions were as follows: loading amounts were 0.4 g/ml, eluant were acetoacetate/dichlormethane mixed solution at ratio of 70:30, loading volume were 5 bed volume (BV) and eluant flow rate were 2 BV/h. Finally, enriched samples of EV (ESEV) were acquired, with a content of evodiamine of 11.5 percent.

Dissolution studies were carried out according to the Chinese Pharmacopoeia 2005 apparatus No. 2 (oar method) with a RCZ-5A dissolution apparatus (Tianjin, China) equipped with eight dissolution beakers. The solubility of evodiamine in pH 6.8 phosphate buffer is 3.8 μg/ml at 37±0.5° according to the equilibrium method. Nine hundred milliliters of pH 6.8 phosphate buffer was used as dissolution medium. One SDEV-HC was used to investigate the dissolution profiles under sink conditions. The dissolution tests were carried out at 37±0.5° at a rotation speed of 100 rpm. Samples of 5 ml were withdrawn at predetermined times and the amount taken was immediately replaced with the same amount of fresh dissolution medium maintained at the same temperature. The samples were filtrated through a 0.45 μm membrane filter (Millipore, cellulose acetate) and the concentration of drug was determined by a HPLC-MS/MS. PMEV-HC and ESEV-HC was studied with the same method, respectively.

Powder X-ray diffraction (PXRD) was performed using a Rigaku D/max 2500v/pc X-ray diffract meter equipped with a high-frequency 18 kW X-ray generator (Rigaku Corp., Japan). Data was processed using DMSNT software (version 1.37, Scintag Inc.). The X-ray source was a copper filament X-ray tube operated at 40 kV and 200 mA. The alignment of the goniometry was checked daily using a corundum standard. Samples were continuously spun and scanned at a rate of 1° 2θ/min over a range of 3-50 degrees.

Eight beagle dogs were divided into two groups: the experimental group (EG) and the reference group (RG). After an overnight fast for 12 h, each beagle dog in the EG swallowed eight SDEV-HC (ESEV/ PVP K30=1/6, w/w), while each beagle dog in the RG swallowed eight PMEV-HC (ESEV /PVP K30=1/6, w/w), with 150 ml water on an empty stomach. Food and drink were not allowed during the following 4-h period of test after administration of the drug. The cross-over test was performed 1 week later after the first administration.

Two hundred microliters of plasma were placed in a glass tube and 100 μl of methanol containing glibenclamide (500 ng/ml) were added as internal standard, 3000 μl of EtoAc were added, mixed and centrifuged (2000 rpm) for 10 min. The clear supernatant liquid (2.4 ml) was transferred to a new glass tube and evaporated till dry under nitrogen flow at 40º. The residue was dissolved in the mobile phase (100 μl) and was determined by HPLC-MS/MS. Blank plasma and quality control samples were assayed as per the above method for the authentic samples. All determinations were performed in triplicate. The concentration of evodiamine and glibenclamide in the plasma was calculated using regression equation.

Pharmacokinetic analyses were performed using valuable data to estimate pharmacokinetic parameters for single dosing. The AUC(0–24 h) and T1/2 of the two pharmaceutical preparations were calculated using a two-compartmental approach with 3P87 software. The Cmax and Tmax were obtained directly from the actual observed data. T1/2 was calculated from the terminal straight portion of 9 data points. AUC was calculated by the trapezoidal method.

Differences in the pharmacokinetic parameters between the two groups were compared by analysis of variance. A P-value of less than 0.05 was considered statistically significant.

Dissolution studies were performed under sink conditions in a pH 6.8 phosphate buffer. PMEV-HC and SDEV-HC were tested for dissolution properties and compared with that of EV-HC. The results of the dissolution profiles are shown in figs. 1a-e and 2. Evidently, the release rate of EV from all the physical mixtures was very little improved compared with that from EV-HC. This showed that the solubilizing effect of PVP K30 to EV was very small. SDEV-HC resulted in a remarkable dissolution increase of EV compared with the PMEV-HC and EV-HC. The release rate of EV from SDEV-HC varied with the ESEV:PVP K30 ratios and reached the maximum at the ESEV:PVP K30 ratio of 1:6 (fig. 2). Pandit and Khakurel [29] suggested that the decrease in dissolution rate of the solid dispersion containing higher proportions of the polymer might be caused by the leaching out of the carrier during dissolution which could form a concentrated layer of solution around the drug particles, therefore, the migration of the released drug particles to the bulk of the dissolution medium was slowed down. 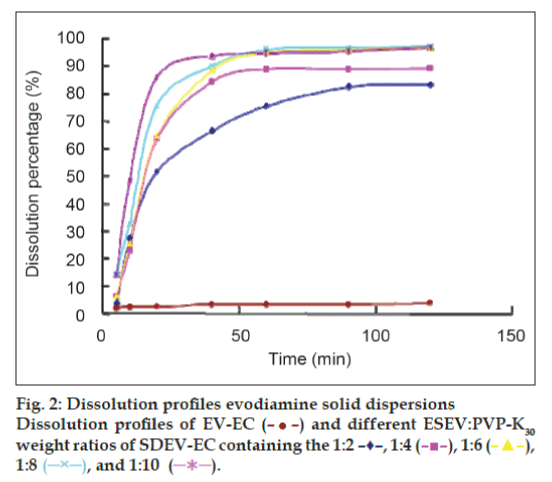 Powder X-ray diffraction patterns taken from the different samples provided us with enough information concerning the lack of solid-state interaction between ESEV and PVP K30. The X-ray diffraction patterns corresponding to ESEV, PVP K30, solid dispersion (ESEV/PVP K30=1/6) and physical mixture (ESEV/PVP K30=1/6) are shown in fig. 3a-d. X-ray diffractograms displayed the presence of peaks corresponding to ESEV in freshly prepared solid dispersions and a perfect concordance between the diffraction spectra obtained for physical mixtures and solid dispersions. These observations proved that ESEV remained unalterable after it’s manufacturing as solid dispersions and that crystallization of PVP K30 does not modify the crystalline structure of the drug. Based on the fact that there is no evidence of interaction between the drug and the PVP K30, it can be concluded that ESEV presents a total chemical stability after preparation as solid dispersions. As shown in fig. 4 and Table. 1, after a single dose of evodiamine 57.5 mg, the geometric mean Cmax values of SDEV-HC, 27.85±13.78 mg/l, was obviously higher than that of PMEV-HC (P<0.05), which was 10.48±7.28 mg/l. The Tmax values of the former, 0.57±0.19 h, were significantly advanced compared with those of the latter, which were 2.18±0.88 h. This might cause a shorter T1/2 of the former (P<0.05). The AUC(0-24h) values of the former were obviously higher than those of the latter. These results suggest that the absorption rate of SDEV-HC is notably faster and greater than that of PMEV-HC and the bioavailability of the former is notably faster and greater than that of the latter. A cross-over test was used to avoid the influences of individual differences in the beagles. It was revealed in the in vitro study that the dissolution rate of SDEV-HC was obviously higher than that of PMEV-HC. We argue that the difference in absorption rates between SDEV-HC and PMEV-HC is derived from the difference between the procedures for their preparation. 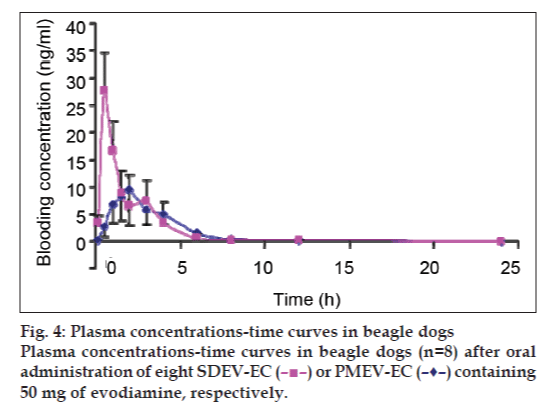 Table 1: Pharmacokinetic Parameters of evodiamine in sdev-ec and in pmev-ec after a single oral Administration in beagles. N=8

In this study, SDEV was prepared using the solvent method. PVP K30 was used as the carrier in the preparation. The dissolution rate of SDEV-HC was markedly faster and greater than that of EV-HC and PMEV-HC. The PXRD studies showed that ESEV presented a total chemical stability after its preparation as solid dispersions (ESEv/PVPK30=1/6, w/w). This meant that the solid dispersion form was an effective way to increase the dissolution of EV.

This project was supported by National Key Technologies R and D Program of China in the 11th Five year Plan under Grant No.2007BAI41B06 and National Basic Research Program of China, No. 2006CB933303.