Procyanidins have attracted some attention due to their demonstrated chemopreventive action, a relatively new and promising strategy to prevent cancer. Breast cancer is one of the leading causes of death in women worldwide and its treatment needs improvements. The aim of this work was to verify the procyanidin dimmer B2 cytotoxic effect to MCF-7 human breast cancer cells. MCF-7 cells were cultured in RPMI medium, containing 20% fetal bovine serum and antibiotics in a CO 2 chamber. The cells were treated with different concentrations of B2 and its cytotoxic potential was assessed by the sulforhodamine B assay, morphologically through haematoxylin-eosin staining and by DNA fragmentation analysis. The significance of differences between experimental conditions was determined using the ANOVA test, followed by the Tukey test when P<0.05. Cell proliferation decreased in a concentration and time-dependent manner upon procyanidin dimmer B2 treatment, being 19.20 μM the IC 50 . Procyanidin dimmer B2 treatment displayed concentration and time-dependent decline in MCF-7 cells compared to control and also induced morphological alterations compatible with cell-death induction. Cell condensation and cell diameter decreased (3.5 folds compared to control cells), after 48 h cell-exposure to 50 μM procyanidin dimmer B2, but the DNA ladder formation was not observed. In conclusion, our results demonstrated that procyanidin dimmer B2 exhibits cytotoxic activity to MCF-7 cells and it could be a potential antineoplastic agent. Further studies are necessary to clarify the procyanidin dimmer B2 mechanism of action. The evaluation of biological efficacy of individual components is an important step towards drug discovery and development.

Breast cancer is one of the leading causes of deaths in women and despite the improvements in diagnosis and treatment of this disease in the last years, the survival rates remain low in comparison with other cancers [1]. Mammary cancers exhibit remarkable heterogeneity not only with respect to oestrogen (ER), progesterone (PR) and human epidermal growth factor-2 (HER-2) receptors expression but also with respect to tumour size, grade and nodal status. Thus, breast cancer is a mixture of diverse phenotypes, which raises different treatment needs [2] and at the present moment, there is no cure for metastatic breast cancer [3], thus justifying the search for new drugs for the treatment and control of this disease.

It has been reported that some procyanidins, both natural and synthetic, exhibit anticancer activity [4-15]. In a report [16], several red wines were fractionated and the authors proved that procyanidin B dimer mixture exhibited aromatase-inhibition activity. This report also demonstrated that the oral intake of procyanidin B dimer mixture was effective in suppressing 62.5% tumour formation in MCF-7-aro cells-injected animals. On the other hand, the procyanidin B dimer mixture was not able to suppress the formation of tumours induced in vivo by nontransfected cells. Procyanidin B3 treatment inhibited acetylation-dependent prostate cell proliferation and expression of cell-cycle control genes, subsequently increasing the death of cultured LNCaP and PC-3 prostate cancer cell lines [17]. It was found that galloilation of procyanidin B2 improves its cytotoxic activity, and procyanidin B2-3,3’-di-O-gallate was more cytotoxic to DU145 prostate cancer cell line than procyanidin B2 [18]. This cytotoxic activity was further confirmed using the LNCaP androgen-dependent human prostate carcinoma cells [19]. Zhao et al. [20] have demonstrated that the ethyl acetate fraction from litchi pericarp extract was cytotoxic to MCF-7 cells and the fraction showed three major constituents: Epicatechin, proanthocyanidin B2 and proanthocyanidin B4.

The aim of the present work was to evaluate the procyanidin B2 cytotoxic activity to MCF-7 cells that express the oestrogen receptor a (ER+), a model for the human in situ breast carcinoma.

MCF?7 cells were grown in 5 ml of RPMI 1640 medium supplemented with 20% fetal bovine serum, penicillin (100 U/ml) and streptomycin (100 μg/ml). Cells were maintained at 37° in a humidified atmosphere of 5% CO2 in air and subcultured every 3 days. Exponentially growing cells were plated at a seeding density of 2×104 cells/ml, in 96?well plates or in Petri dishes. After overnight incubation to allow for attachment, the cells were exposed for 24 or 48 h to various concentrations of B2 (0.5; 1.0; 5.0; 10.0; 25.0 and 50.0 mM) diluted in distilled water. Two millimolar CP was used as the positive control and solutions were sterilised by filtration.

Cell proliferation was determined by using sulforhodamine B (SRB) assay, after 24 and 48 h B2 incubation [21], with modifications. At the end of the incubation time, the medium was removed and a solution of trichloroacetic acid (10% w/v) was added to each well following incubation for 30 min at 4°. Cells were washed, dried and stained with 0.4% SRB and the solubilised product was measured at 510 nm on a Microplate reader (Asys UVM340). The control cells absorbance was considered 100% of cell proliferation, and to assess the effect of B2 on the cells, the proliferation percentage was calculated by comparing the absorbance of treated versus control cells and the IC50 was calculated. IC50 value was defined as the drug concentration needed to inhibit cell proliferation to 50% of control. Results are mean of three independent experiments, with standard errors lower than 5%.

Haematoxylin-eosin (HE) staining of cells for morphological studies was performed as previously reported [22], with modifications. After the incubation of cells plated on sterile microscope cover glass in Petri dishes, they were washed with 0.1 M PBS, pH 7.4, fixed with 70% acetone, dehydrated with ethanol series and HE staining was performed. Slides were mounted in Entellan, observed under a light Olympus BX 52 microscope and photographed. The cell diameter was determined using the Motic Plus 2.0 software for image analysis.

DNA ladder formation was detected by agarose gel electrophoresis after 24 and 48 h of B2 exposure. The DNA was isolated as previously reported [23], with minor modifications. Briefly, the cells were treated with the lysis buffer (25 mM Tris–HCl pH 7.8, 25 mM EDTA, 0.5% Triton X-100) at room temperature for 1 h. After centrifugation at 1000 × g, RNase-A (50 μg/ml) was added to the supernatant for 1 h at 37° followed by Proteinase-K (100 μg/ml) for 1 h at 65°. DNA was extracted using phenol– chloroform and precipitated with 3 M sodium acetate and chilled absolute ethanol. The pelleted DNA was dissolved in Tris–EDTA (pH 8.0) and electrophoresed on 0.8% agarose gel prestained with ethidium bromide (0.5 μg/ml).

Data were represented as mean±SEM of determinations from three independent experiments. The significance of differences between experimental conditions was determined using the ANOVA test, followed by Tukey test when P<0.05.

For analysing the individual effect of B2 (fig. 1) on cell proliferation, SRB assay was performed. The results demonstrated B2 mediated concentration and time-dependent decline in the MCF-7 cell proliferation versus untreated control (fig. 2). After 24 h exposure, B2 exhibited little effect, but it was enhanced after 48 h, being 19.21 mM the IC50. These results demonstrate the B2 antiproliferative activity to MCF-7 cells. 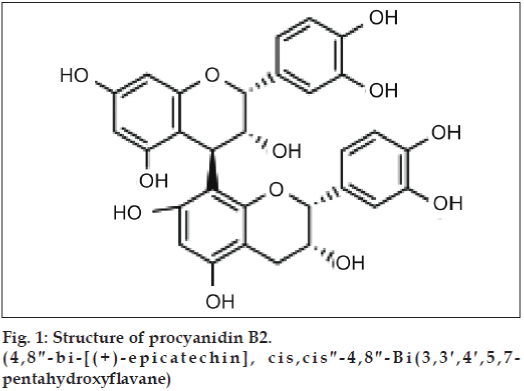 Our results are in agreement with previously published works regarding procyanidin dimer B in vitro cytotoxicity to cancer cell lines. A mixture of procyanidin dimer B exhibited aromatase-inhibition activity to the transfected MCF-7-aro cells and this activity was confirmed in vivo [16]. Procyanidin B3 treatment increased LNCaP cell death by approximately 95% at 100 mM and it acted as a specific histone acetyltransferase inhibitor [17]. It has been demonstrated that galloilation of the procyanidin B2 increased its toxicity to cancer cells [18,19]. The ethyl acetate fraction from litchi pericarp extract exhibited cytotoxicity to MCF-7 cells and the fraction constituents, Epicatechin and proanthocyanidin B2 showed higher cytotoxicity than that of proanthocyanidin B4 and the ethyl acetate fraction [20].

The results of the HE staining studies (fig. 3) showed cell morphology changes. The control cells show an irregular shape and a colony growth pattern. The 0.5 μM B2-treatment produced little effect, however, 50.0 μM B2-treatment decreased cell size, induced the loss of sprouts responsible for substrate attachment, cells became round, and intensively stained. The measurement of cell diameter showed that the 50 μM of B2 was more cytotoxic than CP to MCF-7 cells (fig. 4), reducing 3.5-fold the diameter of B2-treated cells in comparison to control cells. Collectively, the morphological alterations observed in the present work indicate MCF-7 cell-death induction. Figure 3: MCF-7 cell morphology.
MCF-7 cell morphology after 24 or 48 h growth, stained with hematoxylin–eosin. Control cells (C); Cells treated with 2 mM cyclophosphamide (CP); 0.5 μM (B2 0.5) and 50.0 μM (B2 50.0) procyanidin B2. All pictures are typical of three independent experiments each performed under identical conditions. Bar = 10 μm. Note the cell diameter reduction, especially in CP and B2 50.0 groups 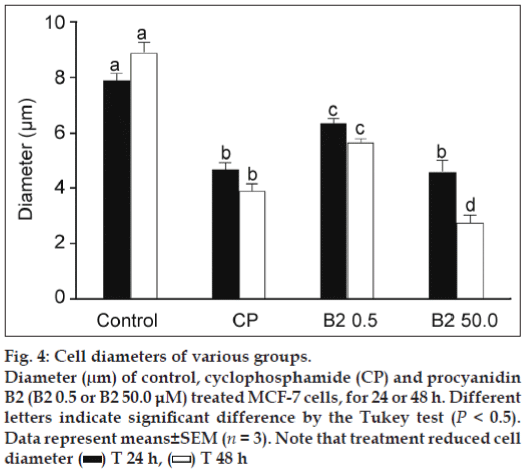 We next investigated if B2 treatment induced DNA fragmentation, a common feature in apoptosis. However, alterations in nuclear morphology may not necessarily involve DNA fragmentation [24]. Despite the B2 cytotoxicity observed towards MCF-7 cells, no DNA-ladder formation (fig. 5) was observed upon the treatment of cells with B2 and even with CP, an anticancer drug that has been reported to be apoptotic to MCF-7 cells [25,26]. It has been reported that MCF-7 lack caspase-3 activity and caspase-3 activity is essential for the DNA-ladder pattern formation [27].

The results of this work indicate that B2 is a potential antineoplastic agent and could be used for the treatment and control of breast cancer. Studies are in progress in our laboratory to identify the cell?death pathway elicited by B2.

The authors are thankful to FAPEMIG for financial support (Grant No. 1305/06), UNIFAL?MG for MMA fellowship and PET?MEC?SESU for CMCPG fellowship.