Chitin is the insoluble polysaccharide which consists of β-1, 4-linked to N-acetyl-β-glucosamine. Chitin was broken down to its monomer NAG by chitinases, which this process called chitinolysis. Chitin has high resistance to organic solvent and requires strong mineral acids for solubilization. Chitin and its derivatives are biodegradable and biocompatible to human and most of the animal[1].

Chitinase is monomeric protein that forms in single strand of polypeptide with molecular weight range in between 21 kDa to 70 kDa. Chitinase also known as poly 1,4-(N-acetyl-β- D-glucosaminide) glycanohydrolase, (EC 3.2.2.14). Chitinase have been classified into families 18 and 19 of the glycosyl hydrolase superfamily, and chitobiases, to family 20. These families are grouping based on primary structure comparisons and it is well established that enzymes that belong to the same family share several common properties in terms of folding of the catalytic domain, substrate specificity, and stereochemistry of the reaction as well as catalytic mechanism. Chitinase is capable to cleave the bond between C1 and C4 of two consecutive N-acetyl-glucosamines of a chitin polymer into low molecular weight product[2]. Broadly, chitinase are classified as the endochitinases, 2 N- acetylglucosaminide and exochitinases. The exochitinases are defined as the progressive action starting from the nonreducing end of the chitin with release of successive diacetyl chitobiose units. N-acetyl-glucosaminide plays a role in the activities are defined as a random cleavage at the internal point in the chitin chain[1]. Chitinases was produced by wide range of microorganisms such as fungi, bacteria, actinomycetes, streptomyces, crustaceans, and insect as well as organisms that do not contain chitin such as viruses, higher plants, animals and humans[3]. Recently, chitinases have been receiving attention because of their possible application for biological control of chitin-containing organisms and also for the exploitation of natural chitinous materials[4]. Chitinases are used extensively in biological control for the protoplasts due to its ability to degrade fungal cell wall and it makes an attractive alternative as an environmentally safe bio control agent. Furthermore, the ability of chitinase to hydrolyze chitin makes it very useful for production of value added products such as sweeteners, growth factors and single cell protein[1]. Purification and characterization of chitinase producing bacteria is important due to the microbial chitinase’s application in agricultural and pollution control. Purification process is mean by separation of interest protein from mixture of protein while maintain its biological function. This can be conduct by controlling the pH, temperature, and ionic strength of the interest enzyme. All purification method is designed based on molecular size, electrostatic properties, and relative solubility in salts until purification homogeneity achieved.

Chitinase producing Bacillus licheniformes (Microbial Type Culture Collection (MTCC) 429), Chromobacterium violaceum (MTCC 2656), Rhizobium radiobates (MTCC 8917), Streptomyces gresius (MTCC 4734) obtained from MTCC, Chandigarh, were used in the present study. The strains were grown and maintained on yeast manitol, Nutrient agar and streptomyces medium, respectively. After cultivating for 2-3 d at 30°, cultures were preserved at 4° for short term storage and were sub cultured every 4 w. The production of chitinase enzyme requires the preparation of inoculum. Culture was scraped and washed from the slant culture with 10 ml sterile water and 2 ml of the inoculum was added to each 250 ml flasks containing production medium.

10.0 g Colloidal chitin was prepared according to the modiﬁed method of Shimahara and Takiguchi[5] 10 g of chitin ﬂakes from crab shells (Sigma-Aldrich, C9213) were mixed with 200 ml concentrated HCl on ice with vigorous stirring for 3-4 h and continued incubation on ice overnight. Then, the mixture was ﬁltered through cheesecloth and dropped slowly into 600 ml of 50 % ice-cold ethanol with rapid stirring on ice. Then, the colloidal chitin was collected by centrifugation at 8000 rpm, for 30 min at 4° and washed several times with tap water until the pH was neutral (pH 7.0). Alternatively the ﬁltrate was re-ﬁltered with suction through Whatman No. 1 ﬁlter paper and washed with water until the washing solution was neutral. The colloidal chitin was kept at 4° untilused[6].

In the present study, five substrates which are Wheat Brawn, Prawn shell Waste, Fish Scale, potato peel and grape leaf were used in the production of Chitinase. Fish scale waste, prawn waste, wheat bran was collected at local fish market (MVP colony, Visakhapatnam) and dried and grinded with mixer (fig. 1). 5 g of individual powder taken in 250 ml Erlenmeyer flask and mixed with distilled water to a solid liquid ratio of 5:4 (w/v). The thoroughly mixed substrate was autoclaved for 20 min at 121°, 15 lb and cooled to room temperature. Under aseptic conditions, the sterilized solid state medium was inoculated with 2 ml (23×106 c.f.u/ml.) spore inoculum. The contents were mixed thoroughly and the flaks were placed in an incubator at 34° for 60 h intervals[7].

After incubation, the fermented solid was mixed with 25 ml (5×volume, based on initial dry weight of the substrate) distilled water and mixed thoroughly on a rotary shaker 150 rpm for 30 min. The entire contents were squeezed through a whatmann no 1 filter paper. After extracting twice the extracts were pooled, centrifuged at 4° for 20 min at 10,000 rpm and the clear supernatant was used as crude enzyme for assay[8].

Chitinase activity was measured by incubating 1 ml of enzyme solution with 1 % 0.3 ml of colloidal chitin with addition of 0.3 ml 1 % acetate buffer (pH 7.0) at 37° for 1 h. The catalytic reaction was terminated and analyzed on adding dinitrosalicylic acid reagent (0.5 ml). The mixture was boiled for 15 min, chilled and centrifuged at 5000 rpm for 5 min to remove insoluble chitin. The resulting adduct of reducing sugars were measured spectrophotometrically at 540 nm[7].

In Solid State Fermentation (SSF), the selection of a suitable solid substrate for a fermentation process is a critical factor and thus involves the screening of a number of agro-industrial materials for microbial growth and product formation. In the present study, five substrates, viz. Wheat Bran, Prawn Waste, Fish Scale, potato peel, grape leaf were screened for growth and production of Chitinase using various strains viz Bacillus licheniformes (MTCC 429), Chromobacterium violaceum (MTCC 2656), Rhizobium radiobates (MTCC 8917), Streptomyces gresius (MTCC 4734). All the substrates and strains supported growth and production of Chitinase, while fish scales and prawn waste was proved superior to other substrates and Chitinase activity of 315.28 U/g and 464 U/g were obtained using Chromobacterium violaceum (MTCC 2656). SSF process was observed to be less sensitive to contamination than submerged fermentation[9]. Solid substrate fermentation holds tremendous potential for the production of microbial enzymes[10](fig. 2-5). Solid substrate fermentation can be of special interest in those processes in which the crude fermented product may be used directly as an enzyme source[11]. Different types of substrates which contain chitin have been tried for the production of chitinase which included fungal cell wall, crab and shrimp shells, wheat bran, prawn waste[8,12-16]. As prawn waste supported maximum enzyme activity with Chromobacterium violaceum this combination was chosen for in depth study (fig. 6-8). 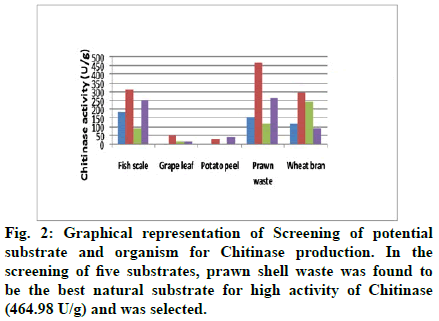 Fig. 2: Graphical representation of Screening of potential substrate and organism for Chitinase production. In the screening of five substrates, prawn shell waste was found to be the best natural substrate for high activity of Chitinase (464.98 U/g) and was selected. Fig. 3: The graphical representation of the effect of incubation time on chitinolytic activity and for the optimal incubation time for Chitinase production, samples were periodically taken 12 h interval. The below figure/ results indicate that from d 1 to 3 there was very less production of chitinase. The production increased on 60th h, increased gradually and attained high titers and gradually decreased on 72nd h, hence 60th h is optimal for high activity of chitinase. The reduction in chitinase yield after an optimum incubation was probably owing to a reduced growth rate resulting from fast depletion of nutrients available to the organism, and also could be owing to the production of secondary metabolites resulting in lower enzyme yield[17,18]. Fig. 5: The graphical representation of the effect of moisture content i.e various moisture content levels (30, 40, 50, 60, 70 and 80 %) to study their effect on activity were selected. The chitinase yield for Chromobacterium violaceum was observed with 30 % v/w moisture content, further increase of moisture content from 30 to 60 % v/w effected significantly in the chitinase content and the maximum yields for Chromobacterium violaceum were obtained at 60 % v/w moisture content. The chitinase yield dropped when the level of the inoculum increased further. The decrease in the enzyme activity with an increase in moisture might be attributed to the phenomenon of flooding of interparticle space of the substrate, which causes decreased porosity and lowers oxygen transfer. Similarly, a moisture level lower than optimum leads to higher water tension, a lower degree of swelling, and a reduced solubility of nutrients of the solid substrate[19]. Moisture optimization can be used to regulate and to modify the metabolic activity of the microorganisms[20]. 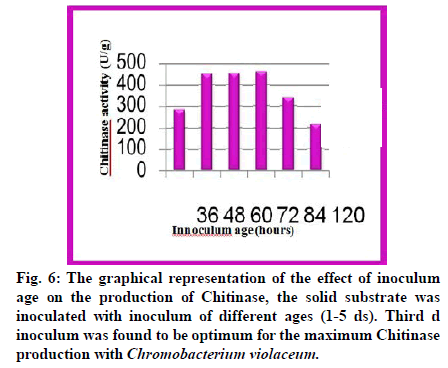 Fig. 6: The graphical representation of the effect of inoculum age on the production of Chitinase, the solid substrate was inoculated with inoculum of different ages (1-5 ds). Third d inoculum was found to be optimum for the maximum Chitinase production with Chromobacterium violaceum. Fig. 7: The effect of various levels of inoculums on the chitinolytic activity. Various inoculum levels were tried (5,10,15, 20, 30, and 35 %) to study their effect on Chitinase production. The chitinase yield for Chromobacterium violaceum was observed from 5 % v/w inoculum level, further increase of inoculum level from 10 to 20 % v/w effected significantly in the chitinase content and the maximum yield for Chromobacterium violaceum was obtained at 20 % v/w. The chitinase yield dropped when the level of the inoculum increased further from 20 to 35 % v/w. Hence the optimum inoculum level was 20 % v/w. It is important to provide an optimum inoculum level in fermentation process. As a lower inoculum may give insufficient biomass causing reduced product formation, whereas a higher inoculum may produce too much biomass leading to poor product formation[21]. 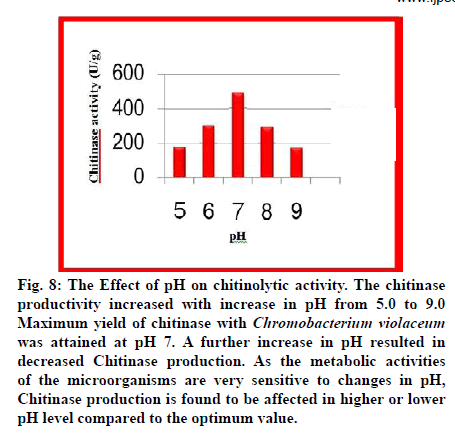 The physicochemical parameters like incubation time, temperature, inoculum age, inoculum volume, pH and moisture content were optimized. The nutritional supplementation study was carried out using various nitrogen sources to enrich the production medium to enhance the enzyme yield. The results of study presented and discussed in the light of existing literature (fig. 9-12). Fig. 9: The effect of carbon sources on chitnase production. The effect of carbon enrichment on the production of Chitinase was examined by adding starch, glucose, galactose, maltose, fructose, arabinose, xylose, sucrose, mannose carbon sources (1 % w/w) to the fermentation medium. Of the 9 carbon sources tested, starch has positive influence with maximum Chitinase activity with Chromobacterium violaceum. In general glucose addition
into media was found to repress chitinase synthesis in almost all microorganisms studied thus indicating that catabolite repression may be involved in the regulation of microbial chitinases[22]. Fig. 10: The effect of selected starch concentration on chtinase production. Significant observation was made when the medium was enriched with different concentrations of starch % w/w, increase in the production of chitinase is observed with 1.5 % w/w addition of starch. Fig. 12: The effect of selected urea concentration on chtinase production. Significant observation was made when the medium was enriched with different concentrations of starch % w/w, increase in the production of chitinase is observed with 1 % w/w addition of urea.

In this study, the optimal conditions for chitinase production from Chromobacterium violaceum MTCC 2656 were determined using SSF method. A partial characterization was also performed, where the optimum temperature, moisture content, inoculum age and volume, pH, carbon and nitrogen sources were determined to obtain the best chitinase activity. The present study suggests that solid waste from prawn waste can be used as suitable substrate for chitinase production using Chromobacterium violaceum. Maximum chitinase activity of 531.66 U/g with Chromobacterium violaceum MTCC 2656, it can be comparable with earlier reports. Exploitation of prawn waste, not only solve the severe problem in disposal of solid waste but also used for value added important chitinase which has immense commercial value and is economical.