Production of ÃÂ²-cyclodextrin: Effect of pH, time and additives

Now a day several drug molecules are being introduced, but when these drug molecules become more and more complex, sophistication has to find its way in the area of excipients, which are needed to formulate these drug substances optimally. One such versatile adjuvant tailored with the help of advances in biotechnology and enzyme technology is cyclodextrin (CD). CD are well known for their ability to encapsulate various molecules in the molecular state conferring on them new physicochemical and pharmacokinetic properties including increased solubility, permeation enhancement, sustain release, improved organoleptic properties, enhanced therapeutic efficacy, reduced toxicity, mixing of incompatible drugs, increased stability and bioavailability and reduced incidence of side effects [1,2].

CDs are cyclic malto-oligosaccharides consisting of 6,7 or 8 glucose units, joined together by α-1,4 glucosidic linkages and are respectively called as α-, β- and γ-CDs. They are obtained from α-1,4 glucans such as starch by the action of an enzyme cyclodextrin glucosyl transferase (CGTase) [3]. Among the three types of CDs, βCD is more suitable for practical use because its cavity diameter (7-8 A°) is best for guest molecule [2,3]. β-CD the most important of all CDs, is already being produced on an industrial scale, by some companies all over the world, but in India not much work has been done on its production.

The present work was undertaken to produce β-CD from starch by the action of the enzyme CGTase. For CGTase production, the microbial strain used was Bacillus circulans because till now many organisms mostly of genus Bacillus have been studied and many other strains still remain to be deeply explored. B. Circulans is one of them. Moreover CGTase obtained from B. Circulans is predominantly β-CD producing enzyme [4] which makes it more interesting taking into account the huge international market of the β-CD. Some parameters were also studied to optimize the yield of β-CD.

β-CD was obtained as a gift sample from Roquette, Japan and Bacillus circulans was obtained from National Chemical Laboratories, Pune. All other chemicals and solvents used were of analytical grade.

The specific medium [5] was prepared and transferred in six different conical flasks. It was then sterilized in an autoclave (Hicon, Delhi) followed by inoculation with the culture. These flasks were kept for fermentation on a rotary shaker (Tempo, Nashik) at a medium speed and temperature of 48°. The first flask was removed after 6 h. The subsequent flasks were removed after every 6 h, last being removed at the end of 42 h. The contents of each of the flasks were filtered. The ammonium sulphate was added to the filtrates and these filtrates were kept for 1 h to effect precipitation of enzyme. Autoclaved corn starch was added to each of the filtrates and refrigerated for 54 h with intermittent shaking to facilitate proper adsorption of enzyme. The contents were again filtered maintaining the temperature of around 4° and the starch cake was washed with chilled phosphate buffer (pH-7). The cake was resuspended into 30 mM sodium dihydrogen phosphate solution, stirred at low speed and at 45° for 5 h to facilitate desorption of enzyme. The starch suspension was filtered under vacuum and the cake was washed with sodium dihydrogen phosphate (30mM) maintained at 45°. The washings were added to the filtrate and the same stored in the refrigerator for further use as partially purified CGTase enzyme for bioconversion of starch to CDs4. The filtrate containing partially purified CGTase enzyme was analyzed for enzyme activity by the method mentioned below.

Soluble starch solution (1%w/v) was prepared in phosphate buffer (pH 6.0) [4,6] and to it partially purified CGTase enzyme was added. It was incubated (Sentwin India) without shaking at 50° for 44 h. Then the solution was heated at 80° for enzyme inactivation and the ß-CD produced was crystallized by lowering the temperature gradually to about 15°. The crystals of ß-CD were separated by centrifugation.

The principle behind the analytical method is that the CD forms inclusion complex with many dyes such as phenolphthalein resulting in a decrease in their color intensity. The decrease in color intensity of the solution is directly proportional to the concentration of CD.

An 8.0 ml aliquot of reaction mixture containing enzyme and starch solution kept for incubation was taken in a test tube. The volume was made up to 10 ml with starch solution in buffer (pH-6). To this mixture was added 3.5 ml of 0.2 M sodium hydroxide solution followed by 1.0 ml of 0.02% w/v phenolphthalein in 5 mM sodium carbonate solution. The test tubes were kept at room temperature for 15 min and the color of the resulting solution was measured by a spectrophotometer (Shimadzu UV 1601, Japan) at 535 nm.

The optimum pH was found out by carrying out the bioconversion at various pH conditions [7] ranging from 5.0 to 8.0. To study the effect of fermentation time the organism, B. Circulans was cultivated in different conical flasks containing the medium to obtain CGTase. The flasks were removed after certain time interval and the contents were analyzed for the activity of CGTase to form CD. To find out the effect of incubation time the enzyme CGTase was incubated with the starch solution; aliquots of sample were withdrawn and analyzed at different time intervals. It has been demonstrated that formation of CD is strongly influenced by the addition of polyols such as polyethylene glycols [8]. Hence, the yield of CD was investigated by adding polyethylene glycol (PEG) 200 in different concentrations (0 to 5%) to the mixture of enzyme and starch solution. The mixture was incubated and analyzed. Same procedure was followed for PEG 400, but here PEG 400 was diluted to 25% to reduce its viscosity. This diluted solution was added to the mixture of enzyme and starch solution in increasing concentration from 0 to 5%. The enzyme obtained was not stable and moreover its activity was decreasing with time. Hence, the effect of calcium ion was studied on the activity and stability of enzyme5. In different test tubes 25.0 ml of enzyme solution was taken. To each test tube, CaCl2 solution (0.1 mg/ml) was added in increasing concentration from 0 to 1.5%. The test tubes were then kept in refrigerator. After 24 h and 72 h, the enzymes were tested for their activity by incubating the enzyme with starch solution in buffer (pH 6) and analyzed. 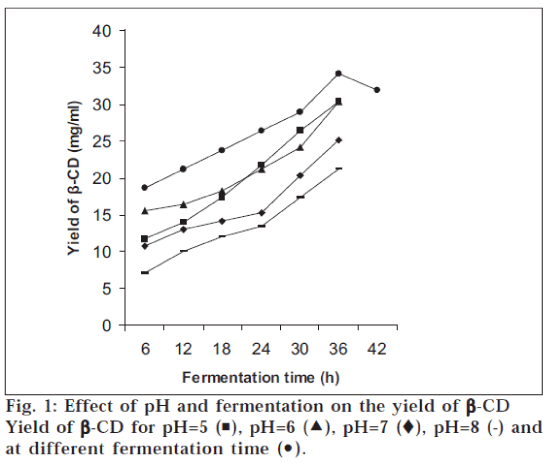 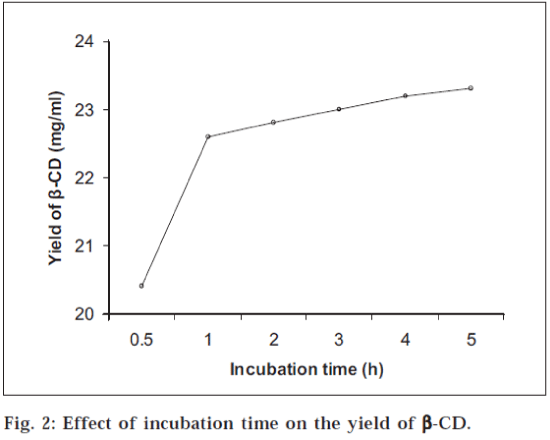 Fig. 2: Effect of incubation time on the yield of β-CD. 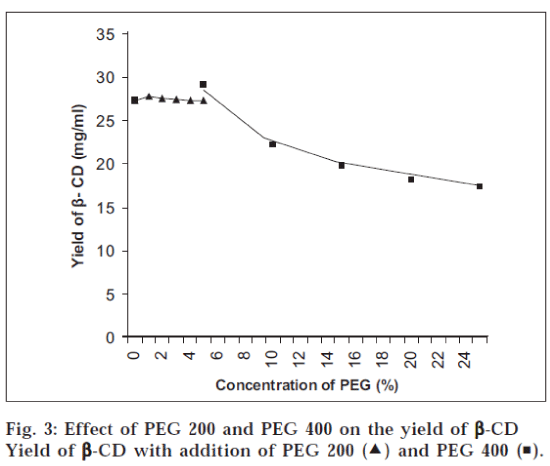 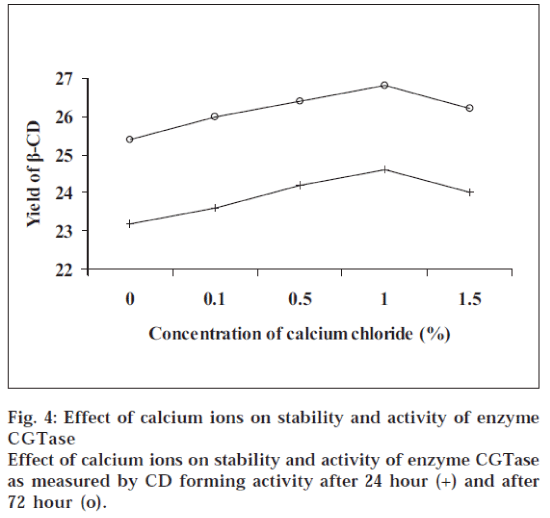 To conclude an excipient β-CD can be produced from starch by the action of the enzyme CGTase which was obtained from Bacillus circulans. The maximum yield of CGTase was after 36 h of fermentation. β-CD yield was found to increase with the increase in incubation period, was maximum by the addition of 1% PEG 200, 5% PEG 400 (diluted to 25%) and at pH 6. The activity and stability of enzyme was found to increase by addition of 1% CaCl2. Further research can be carried out to optimize the yield of β-CD by varying parameters like temperature, effect of solvent and so on. Attempts can also be made to derivatize β-CD.

The authors are thankful to Roquette, Japan for providing the pure excipient β-CD as the gift sample. They are also grateful to Prof. Dr. V. D. Rangari, Principal, J. L. Chaturvedi College of Pharmacy, Nagpur, for providing experimental facilities for this work.