Six locally isolated strains of Penicillium were checked for their potential to produce cyclosporine A through submerged fermentation. The medium used for drug production was composed of glucose, 5%; peptone, 1%; KH2PO4, 0.5% and KCl, 0.25% (w/v). Butyl acetate was used to extract the fermentation medium for cyclosporine ‘A’ analysis. The confirmation analysis was done through high performance liquid chromatography and the chromatograms obtained were compared with that of Sandimmun Neoral® capsule (Novartis) containing 100 mg of cyclosporine and with the external standard cyclosporine A 98.5% pure. Only chromatogram of Penicillium fellutanum (FCBP 937) isolated from Guava fruit showed a peak at 2.768, which was comparable with both the standards. The amount of drug calculated was 16.18 μg/ml.

Cyclosporines are a member of the group of cyclic peptides and are composed of 11 amino acids. Cyclosporine A is the major component of the cyclosporines, which distinguishes from other cyclosporines by the type of amino acid at carbon number 2. It is the only member of this group used clinically [1]. It has antiinflammatory, immunosuppressive, antifungal and antiparasitic properties [2]. It is used extensively in the prevention and treatment of graft-versus-host reactions in bone marrow transplantation and for the prevention of rejection of kidney, heart and liver transplants [3].

Cyclosporine A is widely produced by submerged fermentation of aerobic fungi identified as Trichoderma polysporum [4] but currently identified as Tolypocladium inflatum [5]. Since its discovery, very few studies have been carried out to search for other microbial sources for its production. Most of the research work on cyclosporine A is based on fungi Tolypocladium inflatum and Aspergillus terreus.

The present study was, therefore, designed to explore some locally isolated Penicillia for cyclosporine A production that has not yet been studied for this target.

Malt yeast extract (MY) medium was selected as the seed medium for inoculum preparation of the selected strains. The medium was composed of malt extract 2%, yeast extract 0.4% and initial pH was adjusted to 5.7. MY medium (50 ml) was poured in Erlenmeyer flasks (250 ml capacity) plugged with cotton plugs. These flasks were sterilised by autoclaving at 121° and 15 lb/inch2 pressure for 15-20 min. By using a cork borer, 0.8-cm disk of 5-day old cultures on MEA were cut out and were inoculated in sterilised medium in flasks. The inoculated flasks were incubated on an orbital shaker at 200 rpm for 72 h at 30° [6].

For cultivation, production medium specially designed for cyclosporine A production composed of glucose, 5%; peptone, 1%; KH2PO4, 0.5%; KCl, 0.25% (w/v), at pH 5.3, was prepared. According to the methodology of Agathos et al. [7], 5 ml of seed inoculum from each isolate was introduced into 250 ml Erlenmeyer flasks containing 50 ml of production medium. The fermentation was continued at 28±1° for 10 days, at 200 rpm.

Butyl acetate (30 ml) was added to the harvested fermentation medium and stirred at 200 rpm for 24 h at 30°. Organic layer was formed after 24 h, which was separated by a separating funnel and evaporated under vacuum till dryness. Dried extract was weighed and dissolved in 30 ml methanol.

The aqueous layer of cultivation medium containing fungal pellets was filtered for harvest of biomass. The filtration was performed by using Whatman Filter Paper No. 1. The fresh biomass was collected on the filter paper by using a conical funnel. Filters were slightly rinsed with water 1-2 times for the washing of media and weighed on digital weighing machine. The filters were dried in oven at 40° and reweighed after cooling. Following formula was used to calculate the dry biomass: Fungal dry biomass=wt. of filter paper−wt. of dry filtrate.

Quantity of cyclosporine A in crude extract was analysed by high performance liquid chromatography (HPLC), using Hitachi system consisting of L- 2100/2130 pump, L-2420 UV/Vis Detector with a detection span from 190 to 900 nm. Analysis was done using a C18 column with a 5 μm particle size, and acetonitrile:methanol:water (42.5:20:37.5, v/v) as mobile phase at a flow rate of 0.8 ml/min with UV detection at 215 nm.

For initial confirmation of cyclosporine A, Sandimmun Neoral® capsule (Novartis) containing 100 mg of cyclosporine was used. For this purpose, 100 μl from capsule was taken with the help of micropipette and dissolved in 10 ml of methanol. Then, HPLC of this solution was carried out according to the conditions mentioned above.

The retention time and peak area of the samples were compared for final confirmation and quantification, with the external standard cyclosporine A 98.5% pure (Sigma-Aldrich, Fluka). The standard was analysed under same conditions as described. The cyclosporine A level in crude extracts was determined by the formula: % cyclosporin A by weight=(AsWtVs×purity of reference)/AsWtVs. Where, As is the area of sample peak, Ar is area of reference peak, Wr is weight of reference material in grams, Ws is weight of sample in grams, Vs is volume of sample, and Vr is volume of reference material. The area of sample peaks and of reference peak was calculated from the chromatograms obtained by HPLC program LaChrom Elite.

Cyclosporine-related compounds are reported to possess antifungal activity. For the detection of antifungal activity, agar well diffusion method was used. Verification of antifungal activity of cyclosporine A was tested against Aspergillus niger procured from First Fungal Culture Bank of Pakistan and isolated from air mycoflora and preserved under reference no. FCBP-74. Test fungus was inoculated on MEA media plates by using needle. A well of 0.8 mm diameter was punched into the plate with the help of a sterile cork borer and 50 μl of purified sample of cyclosporine A obtained from Penicillium fellutanum by several runs of HPLC was added to well and was incubated at 30° for 5 days. Minimum inhibitory concentration (MIC) was also calculated using same procedure. Stock solution of 10 μg/ml was used to make concentrations of 1, 2, 3, 4, 5, 6, 7, 8 and 9 μg/ml for this assay.

The drug produced was extracted in butyl acetate which was then run through HPLC to confirm the presence of cyclosporine A. The chromatograms of the extract from tested Penicillium species were compared with Sandimmun Neoral® capsules containing 100 mg cyclosporine A as active ingredient and pure cyclosporine A supplied by Fluka analytical, Japan. Amongst the six tested Penicillium species, only Penicillium fellutanum (FCBP 937) isolated from guava fruit showed a peak for cyclosporine A at 2.768 (fig. 1) that was found comparable to the peak generated by Sandimmun Neoral® capsules at 2.768 (fig. 2) and by pure cyclosporine A at 2.81 (fig. 3). No such peaks were recorded in other five species. The estimated quantity of cyclosporine A in extracted sample was 16.18 μg/ml with a 0.0.427 g/50 ml of fungal biomass. However, this quantity was found to be lower than that recorded by earlier workers in the most studied fungal strain, i.e., Tolypocladium inflatum. As Dreyfuss et al. [4], and Agathos et al. [7], found a very good yield of 105.5 mg/l and Balakrishnan and Pandey [8] showed that T. inflatum can produce higher levels of cyclosporine A up to 183 mg/l. 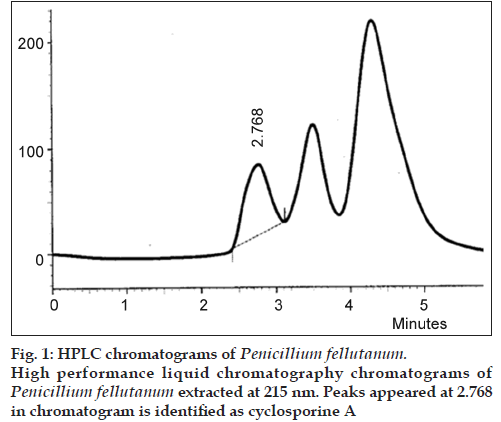 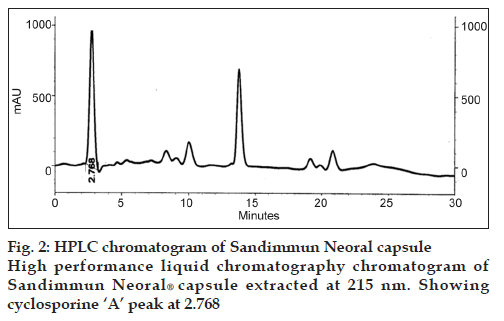 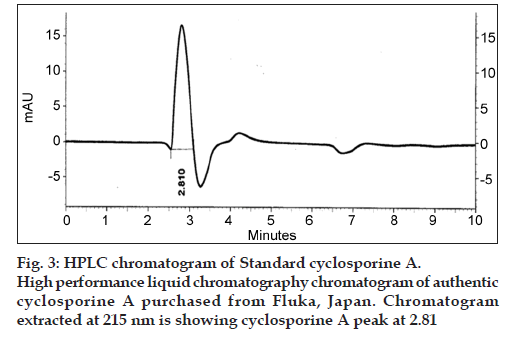 As cyclosporines are known for their antifungal activity, the extracted samples were checked for this capability against Aspergillus niger through well method. The extract from P. fellutanum inhibited the growth of tested fungi. The average diameter of inhibition zone was calculated as 1.15 cm after measuring the diameter of inhibition zone at eight different dimensions and then taking its mean (fig. 4). The MIC calculated for this inhibition was 3 μg/ml. Besides being produced by Tolypocladium inflatum so far, this drug has been reported to be produced from Aspergillus terreus , Fusarium solani and Fusarium oxysporum [9]. This study confirms Penicillium fellutanum as a new fungal source of cyclosporine A production.