The liver plays a crucial role in the hepatobiliary excretion of many endogenous and exogenous substances from the body. Various liver diseases have an influence on this excretion [1]. The risk of liver damage has recently increased due to greater exposure to environmental toxins, pesticides and frequent use of chemotherapeutics. Liver damage commonly results from viral and protozoal infection, toxicity due to drugs, food additives and fungal toxins. Several investigations have provided convincing evidence that N?nitrosamines cause a wide range of tumors in all animal species. These compounds are considered to be potential health hazards to man [2]. Exposures of man to preformed N?nitrosamines occur through the diet, in certain occupational settings and also due to the use of tobacco products, cosmetics, pharmaceutical products and agricultural chemicals [3].

N?Nitrosodiethylamine (DEN), one of the most important environmental carcinogens of this class, primarily induces liver tumor. DEN is considered to be a genotoxic carcinogen [4]. It is often assumed that DEN initiates and propagates tumor development primary by inducing DNA alterations that lead to mutations [5]. Indeed, indicative mutations in the ras gene have been observed in mouse liver tumors arising in response to DEN treatment [6].

Indigofera aspalathoides Vahl ex DC. (Papilionaceae) commonly known as Shivanar vembu is distributed throughout the South India and Sri Lanka. The whole plant has been traditionally used for cooling, demulcent and odematous tumors; used in the form of decoction for leprosy and cancerous affections [7]. The ashes are used in preparations against dandruff’s. The stem is traditionally used for various skin disorders and cancer [8]. Methanol extract of Indigofera aspalathoides stem also possess hepatoprotective activity [9].

Indigofera aspalathoides Vahl ex DC. roots were collected from Bharathidasan University campus, and the identity of plant was verified at Rapinat Herbarium, St. Joseph’s College, Tiruchirappalli, South India. Shade?dried and powdered root (50 kg) was extracted at room temperature with ethanol (1:6 w/v) by using Soxhlet extractor for 48 h. The extracts were concentrated in vacuum at 40° using a rotary evaporator and stored in glass vials at 4° until use.

Male albino Wistar mice (25?30 g) were used as experimental animals. They were housed in polypropylene cages with sterile, inert husk materials as bedding. The experimental animals were maintained under controlled environment conditions of light and dark cycle (light 12 h: Dark 12 h, temperature 23±2º and relative humidity 55±10%). Animals were allowed to take standard pellet diet and water ad libitum. The whole experiment was conducted according to guidelines and approval of the Animal Ethical Committee of Sri Krishnadevaraya University at Anantapur, India (Reg. No. 25/1/99/AWD).

Animals were divided into five groups of each having 6 mice. Group I served as placebo control, received an injection of the vehicle (Saline 1 ml/kg i.p.) only. Carcinogenesis was induced in the groups II and III by administrating intraperitoneally 50 mg/kg of DEN (in saline) once in a week for a period of three week. Soon after DEN administration, ethanol root extract of Indigofera aspalathoides (EIA, 100 mg/kg) were orally given to group III, whereas group IV was administrated only EIA.

At the end of the treatment schedule, blood samples were collected by cardiac puncture and allowed to clot. Serum was then separated by centrifugation at 3000 g for 10 min. Serum samples stored at ?70° were later used for biochemical assays such as aspartate aminotransferase (AST), alanine aminotransferase (ALT), alkaline phosphatase (ALP) and serum bilirubin levels using commercially available kits according to manufacturer’s protocols (Randox Laboratories Co, UK). Serum total protein levels were determined by Lowry’s method [10], using bovine serum albumin as a standard.

Animals were sacrificed by cervical dislocation, and the liver perfused with ice?cold saline. Ten percent of homogenate was prepared in 50 mM phosphate buffer (pH 7) using a polytron homogenizer at 4° and the homogenates were centrifuged at 12,000 g for 15 min at 4°. The liver total protein levels were determined by the method of Lowry et al. [10], maintaining bovine serum albumin as a standard.

A portion of the median lobe of the liver was dissected and fixed in 10% neutral buffered formalin solution for 24 h. The washed tissue was dehydrated in descending grades of isopropanol and finally cleared in xylene. The tissue was then embedded in molten paraffin wax. Sections were cut at 5 μm thicknesses, deparaffinized, rehydrated and stained with haematoxylin and eosin. The sections were then viewed under light microscope for analyzing the histopathological changes. The extent of DEN-induced necrosis was evaluated by comparing with the normal control samples.

The protective effect of EIA on the DEN-induced hepatocarcinogenesis was evaluated in male Swiss albino mice. A significant increase in the activities of the serum enzymes, AST, ALT and ALP and total bilirubin were observed in mice receiving DEN when compared to placebo control. The pretreatment with EIA significantly (P<0.05) protected the elevation of AST, ALT, ALP and total bilirubin activities in DEN-induced liver cancer (Table 1). Elevation in the activities of serum transaminases and ALP has been considered as sensitive indicators of hepatic injury. The increased levels of serum transaminases and ALP have been attributed to the damaged structural integrity of the liver, since they are cytoplasmic and are released into circulatory system after cellular damage [11]. The level of ALT is an indicator of cell membrane damage. Whereas, the level of AST is an indicator of mitochondrial damage, since mitochondria carries 80% of this enzyme [12].

Table 1: Effect Of Eia On Serum Enzymes In Den-Induced Hepatocarcinogenesis In Mice

Serum bilirubin is one of the most reliable tests employed in the diagnosis of hepatic diseases. It provides useful information on liver functioning [13]. Bilirubin, a chemical breakdown product of hemoglobin, gets conjugated with glucuronic acid in hepatocytes to increase its water solubility. Bilirubin concentration has been used as a reliable method to evaluate chemically induced hepatic injury. Besides various normal functions liver excretes the breakdown product of hemoglobin namely bilirubin into bile [14]. 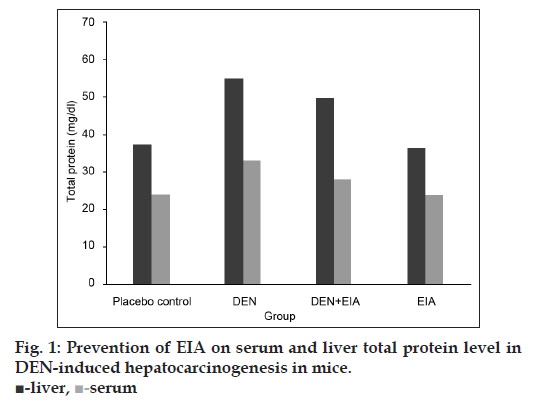 The liver of placebo control animals showed normal hepatic architecture (fig. 3a). Group II mice, exposed to DEN revealed extensive liver damage, characterized by the disruption of the lattice nature of the hepatocyte, damaged cell membranes, fatty changes, necrosis, dysplasia fibrosis, inflammation, disintegrated central vein and damaged hepatic sinusoids (fig. 3b?e). Pretreatment with EIA at 100 mg/kg dose showed significant reduction in the area of necrosis and inflammatory infiltrates in the centrizonal area with disappearance of inflammatory infiltrate around portal triad (fig. 3f). Centrizonal necrosis, which involves the cells around the central hepatic vein, occurs in viral hepatitis, DEN, carbon tetrachloride and chloroform toxicity, and anoxic states such as cardiac failure and shock [15,16]. In the present experiment, it indicates the damage caused by DEN to the hepatocytes. The decrease in the area of necrosis as well as in the infiltration of the inflammatory cells in the liver lobules demonstrated by the extracts is indicates the therapeutic efficacy of the plant. In conclusion, the mechanism of chemopreventive effects of EIA mainly regulates the activity of serum enzymes and protein levels and thereby protecting the integrity of the liver. The results of this investigation may improve our understanding in usage of this plant as an alternative medicine for hepatic?cancer therapy. However, further studies are needed to characterize the active principles and to elucidate the molecular mechanism and action of EIA.

This article is dedicated to the memory of Mr. A. Ayyavu, to whom we are also thankful for his encouragements. Authors would like to thank Dr. S. Soosairaj for plant identification, helpful discussion and critical reading of the manuscript.