A characteristic of many neurodegenerative diseases, which include stroke, Alzheimer’s disease, Parkinson’s disease and amyotrophic lateral sclerosis, is neuronal cell death. The incidence of neurodegenerative disease surges, especially in the aging population. Although the definite etiology and pathogenesis are not very clear, many studies show that oxidative stress has been implicated in many neurological diseases [1‑5].

Oxidative stress is characterized by an overproduction of reactive oxygen species (ROS), which generate an oxidative burst of intracellular signaling cascades that induces cell death [6‑8]. ROS is known to induce the destruction of biomolecules, such as lipids, proteins, and DNA [8,9]. Hydrogen peroxide (H2O2) is a well‑known ROS that is formed during normal metabolism and is easily converted to hydroxyl radical which cause damage to many cellular components or even cell death [10,11]. Exposure of many different cell types to H2O2 caused a rapid increase in ROS production [12], thus inducing apoptosis. It has been reported that H2O2 plays an important role in neuron damage and even death [11,13]. Human neuroblastoma SH‑SY5Y cell line is widely used as an in vitro model for studying oxidative stress‑induced neuronal cell death [14]. Many antioxidant co12mpounds can prevent oxidative stress‑related disorders by scavenging ROS [15].

In this study, we evaluated the neuroprotective effects of TPC on H2O2‑induced oxidative stress in SH‑SY5Y cells in vitro. This study demonstrates that TPC extract, diluted in serum‑free medium for 24 h, potently attenuated H2O2‑induced cell viability loss and cell apoptosis. In addition, TPC can ameliorate the increases intracellular ROS, decrease in mitochondrial membrane potential and ATP induced by H2O2‑treatment.

Extraction and purification of TPC

TPC from I. helenium was extracted according to our previous study [20]. Briefly, the dried powder of I. helenium (5.0 g) was mixed with 100 ml 30% ethanol in a 250 ml conical flask and extracted in an ultrasonic bath for 60 min. The ethanol extract was partitioned with petroleum ether, dichloromethane, and ethyl acetate, successively and then purified by silica gel column and thin‑layer chromatography.

TPC contents in the extracts were measured by using the Folin‑Ciocalteu method [21]. Briefly, 5 mg of TPC extracts were dissolved in 1 ml of 30% ethanol. The solutions (0.2 ml) were individually mixed with Folin‑Ciocalteu reagent (0.5 ml) and 7.5% sodium carbonate solution (5.0 ml). The mixture was then diluted to 10 ml with distilled water, and then incubated at 37° for 30 min. The absorbance of the solution was measured at 760 nm using a UV/Vis spectrophotometer (model 2100, Labtech, American). The TPC content was 3.12 mg/g (expressed as gallic acid equivalents in milligrams per gram of sample).

Hydroxyl Radical (·OH) is the most reactive and can damage numerous biomolecules. ·OH scavenging assay was performed by Fenton’s reagent (Fe (II)/H2O2) [22]. Reaction solution consisted of 1,10‑phenanthroline 0.5 ml (3.75 mM) and ferrous sulfate 0.5 ml (0.75 mM) in phosphate buffer (20 mM, pH 7.4), 0.5 ml H2O2 (30 mM) and various concentrations of extract solution. Extract solution (0.5 ml) was added to the reaction solution and incubated for 40 min at 37°, and then allowed to cool. Absorbance was measured at 510 nm and scavenging activity of hydroxyl radical was calculated.

DPPH radical scavenging activity was determined as previously reported by Teugwa et al. [23] Various concentrations of the extract were diluted with the extraction solvent, then 100 μl of sample solution was mixed with 100 μl DPPH solution in ethanol (40 mM). The mixture was immediately shaken for 20 s on a vortex mixer, and then incubated at 37° water bath for 30 min. The absorbance of the sample was measured at 517 nm against a blank. The radical scavenging activity was calculated.

SH‑SY5Y cells were purchased from Cell Resource Center of Institute of Basic Medical Sciences of Chinese Academy of Medical Sciences. Cells were incubated in Dulbecco’s Modified Eagle Medium (DMEM)/F12 (1:1) supplemented with 10% fetal bovine serum and 100 U/ml gentamicin. Cells were maintained at 37° containing humidiﬁed 95% air and 5% CO2. The cells were seeded at appropriate densities and incubated for 24 h before conducting the desired experiment. Concentrations of 200 μM H2O2 were used in the subsequent study after 24 h of exposure. Appropriate concentrations of TPC were treated 1 h before treatment with H2O2. Samples without H2O2 were used as normal control.

The ability of TPC to protect human SH‑SY5Y cells from H2O2 was determined by the Cell Counting Kit‑8 (CCK‑8) assay (Beyotime Institute of Biotechnology) using a 96 wells plate according to the manufacturer’s instructions. Briefly, cultured human neuroblastoma (SH‑SY5Y) cells were subjected to oxidative damage with H2O2 in the presence and absence of 0.5 and 5.0 μg/ml TPC. The absorbance of the samples was measured in an automatic microplate reader.

SH‑SY5Y cells were seeded into 6‑well culture plates at a density of 1×105 cells/ml. Cells were treated with TPC at concentrations of 0.5 and 5 μg/ml for 1 h before exposing them to 200 μM H2O2. The cellular morphology was observed using inverted phase contrast microscope (Nikon, Tokyo).

Hoechst staining was used to visualize nuclear changes and apoptotic body formation that is characteristic of apoptosis [24]. SH‑SY5Y cells (1×105 cells/ml) were seeded, treated with TPC and 200 μM H2O2 as previously described. Cells were fixed and stained with 2 μg of Hoechst 33258. After incubation for 5 min in the dark, the cells were washed, and observed under a fluorescence microscope (ECLIPSE Ti‑U, Nikon, Japan).

Production of ROS was monitored spectrofluorometrically and a fluorescence microscope using 2’,7’‑dichlorodihydrofluorescein diacetate (DCFH‑DA). A final concentration of 10 μM DCFH‑DA was added to each well in a 6 well plate. The cells were incubated at 37° for 2 h and then washed three times with phosphate buffer saline (PBS). DCFH‑DA for reactive oxygen species (ROS) were determined by Spectra Max Multilabel microplate reader and fluorescence microscope.

Following incubation for 24 h with H2O2, the SH‑SY5Y cells were collected from cell culture flask. Then lysis buffer (50 mMTris‑HCl (pH 6.8), 100 mM DTT, 2% SDS, 10% glycerol) was added, followed by centrifugation at 1000 rpm for 15 min at 4°. SOD was measured at 550 nm by a spectraMax M2 microplate reader (Molecular Devices, American) as per manufacturer’s instructions. SOD activity was expressed as units per mg of protein.

Results are expressed as means±SD. The data were statistically analyzed by one‑way analysis of variance (ANOVA) using a statistical package program (SPSS 17.0); P<0.05 was considered as statistically significant. 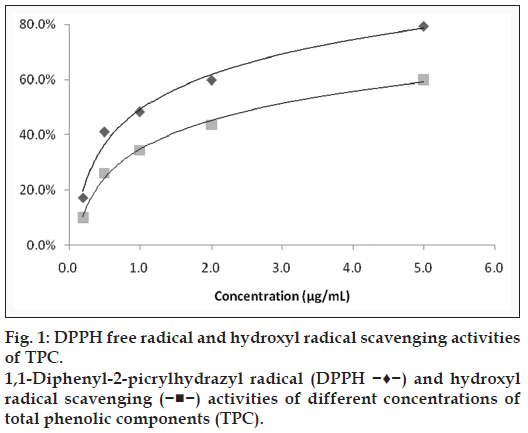 As reported in our earlier publication [26], the viability of SH‑SY5Y cells incubated with 200 μM H2O2 for 24 h decreased by 35% compared to the control. 200 μM H2O2 could produce a certain degree of apoptotic cells, but not a lot of deaths. Therefore, a concentration of 200 μM H2O2 treatment for 24 h for subsequent experiments that were intended to investigate the protective effects of TPC against H2O2‑induced cytotoxicity in SH‑SY5Y cells.

To assess the possible toxic effects, the cells were treated within a concentration range of 0.5‑50 μg/ml TPC for 24 h. The results obtained from our previous study [26] showed that 0.5‑10 μg/ml of TPC was nontoxic to SH‑SY5Y cells according to cell viability. To further determine the neuroprotective effects of TPC, SH‑SY5Y cells were treated with concentrations of 0.5 and 5 μg/ml TPC for 1 h and then challenged with 200 μM H2O2. A final concentration of 0.5 and 5 μg/ml TPC significantly ameliorated the reduced cell viability induced by H2O2 (fig. 2). Further, the cell morphological changes were observed using inverted phase contrast microscope. The Incubation with 200 μM H2O2-induced cell shrinkage. Hoechst 33258 staining showed apoptotic morphological alteration (fig. 3). 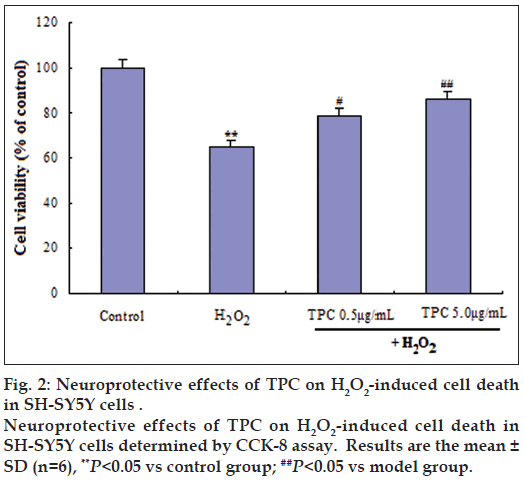 Figure 3: Morphological analyses of SH-SY5Y cells.
The SH-SY5Y cells pretreated with 0.5 and 5 μg/ml of total phenolic compounds (TPC) for 1 h were exposed to 200 μM H2O2 for 24 h and then cellular nucleus were fluorescence stained by Hoechst 33258 (fluorescence microscope, 20×).

Apoptotic and necrotic changes in the cells were determined morphologically by flow cytometry with Annexin V‑FITC/PI staining. The effects of TPC on early and late apoptosis/necrosis induced by H2O2 were detected using Annexin V/PI staining as previously described [27]. FITC‑conjugated Annexin V is a marker for apoptosis and PI is an indicator of necrotic cells [28]. Treated cells with H2O2 signiﬁcantly increased the percentage of apoptotic and necrotic cells. Simultaneous TPC pretreatment of cells signiﬁcantly reduced the number of cells labeled with FITC‑conjugated Annexin V and decreased markedly the percentage of apoptotic cells (fig. 4). Figure 4: TPC suppresses the apoptosis of SH-SY5Y cells induced by H2O2 by flow cytometric analysis.
The SH-SY5Y cells pre-treated with total phenolic compounds (TPC) for 1 h were exposed to 200 μM H2O2 for 24 h and then the cells were labeled with Annexin-V/PI staining and analyzed by flow cytometer. (a) Flow cytometric histograms of control, H2O2, and cells pretreated with 0.5 and 5 μg/ml TPC. (b) Fluorescence intensities of control group, H2O2 and H2O2 in cells pretreated with 0.5 and 5 μg/ml TPC. Each bar represents mean±SD of 3 estimations, **P<0.05 vs control group and ##P<0.05 vs H2O2 alone group.

We further determined the intracellular ROS scavenging activities of TPC by DCFH‑DA‑loaded SH‑SY5Y cells. As shown in fig. 5, treatment of SH‑SY5Y cells with 200 μM H2O2 led to a significant increase in intracellular ROS levels compared to normal controls. The fluorescence intensity of the mean oxidized dichlorofluorescein (DCF) was increased to 198% compared to controls after 200 μM H2O2 treatment in SH‑SY5Y cells, while TPC alleviated the ROS accumulation in a dose dependent manner (fig. 5). This result shows that TPC inhibits H2O2‑induced ROS production in SH‑SY5Y cells in a dose‑dependent manner.

Figure 5: Effect of TPC on ROS induced by H2O2 in SH-SY5Y cells.
(a) Fluorescent micrographs of DCFH-DA-loaded SH-SY5Y cells (fluorescence microscope, 20×). (b) Intracellular reactive oxygen species (ROS) level calculated according to the fluorescence intensity using pectrometer. Each bar represents the mean±SD of 4 determinations, **P<0.05 vs control group; #P<0.05 and ##P<0.05 vs model group.

It is well known that the highly ROS can damage NADH dehydrogenase and ATP synthase, resulting in the shutdown of mitochondrial energy production. Also, ROS leads to changes in mitochondrial membrane permeability. We further determined MMP and ATP. As shown in fig. 6, H2O2 significantly induced the decrease of MMP and the decrease of ATP production. On the other hand, TPC dose dependently reversed these effects. SOD activity was decreased to 48% of control levels after H2O2 treatment (P<0.05). TPC treatment significantly prevented H2O2‑induced decrease in SOD activity in a dose‑dependent manner (P<0.05, Table 1).

Table 1: Effects of tpc on sod activity in Sh-sy5y cells exposed to H2O2

Neurodegenerative diseases have been related to oxidative stress, which plays a pivotal role in the regulation of cell death. H2O2 can serve as an oxidative inducer in the model of oxidative stress, and H2O2‑induced oxidative stress plays a causal role in the induction of apoptosis. It is known that mitochondria are key intracellular organelles that play prominent roles in energy metabolism ROS generation, and apoptosis‑programmed cell death [30]. The present study reveals the neuroprotective effects of TPC on H2O2‑induced oxidative injury in SH‑SY5Y cells through a modulation function of mitochondria.

Interestingly, cellular signalling pathways are regulated by the intracellular redox state and the ROS produced stimulate the cell death machinery [31]. SODs represent the ﬁrst line of defense against oxidative stress, which is considered an essential factor in several neurodegenerative diseases [32]. To confirm the role of TPC in H2O2‑related redox regulation, we further determined ROS (using DCFH‑DA) and SODs (using nitroblue tetrazolium chloride as chromogen at 560 nm). As shown in fig. 5 and Table 1, H2O2 significantly induced the increase of intracellular ROS and the reduction of SOD activity; 0.5‑5 μg/ml TPC significantly inhibited the increase in ROS and reduction of SOD activity. Our results suggest that scavenging ROS may be one of the mechanisms in the neuroprotective effects of TPC. Several evidences support an essential role for oxidative stress in the development of SH‑SY5Y cell dysfunction [33].

In summary, TPC exerts neuroprotective effects against H2O2‑induced oxidative damage via scavenging free radical, blocking ROS production, the reduction of SOD activity, decrease of MMP and a decrease in ATP production. The potential of TPC and its neuroprotective mechanisms in attenuating H2O2‑induced oxidative stress‑related cytotoxicity is worth further exploration.