Aflatoxin B1 (AFB1) is a mycotoxin produced by fungi Aspergillus flavus and A. paraciticus and classified as a class I carcinogen due to its association with hepatocellular carcinoma (HCC) in humans [1]. AFB1 is widely-found as a contaminate in various crops such as rice, dried fruits, nuts, and sorghum [2], which enables humans to become easily exposed to AFB1 in daily life. The main site for AFB1 metabolism for humans is the liver through cytochrome P450 CYP1A2 and CYP3A4 pathways to form AFB1-8,9-epoxide, a highly reactive metabolite that directly binds to biomolecules, especially DNA and leads to AFB1-DNA adducts. This adduct formation results in gene mutation, and initiation of carcinogenesis. Likewise, AFB1 and AFB1- 8,9-expoxide also cause the adduct formation via the induction of intracellular reactive oxygen species (ROS) production, which damages biomolecules causing oxidative stress [3-5].

Recent studies illustrated that various plant extracts expressing antioxidant activity were capable of decreasing AFB1 toxicity and these extracts included, green tea, purple rice, cruciferous vegetables, turmeric and a few others [7-11]. Corn is another type of food plant domestically consumed in Southeast Asia. Among those, purple waxy corn (PWC) extract has been reported to contain large quantities of bioactive compounds such as phenolics, flavonoids and anthocyanins and exhibited antioxidant activity as compared to other coloured corns [12]. Previous studies also revealed antidiabetic, anticancer, antiinflammatory and especially antioxidant activity of PWC [13-18]. This study was aimed to investigate the effects of PWC extract on AFB1-induced cytotoxicity, oxidative stress and genotoxicity.

PWC cobs and seeds were ground in an electrical herb grinder separately, while boiled seed was steamed for 30 min before grinding and then extracted using either deionized water (DI water) or 70 % acetone as solvents with the sample:solvent ration of 25 g:1000 ml under 60º for 4 h. The extracts were filtered by Whatman no.1 filter paper to remove solid residual. About 0.1 % w/w ascorbic acid was added to protect oxidation before removing water by freezedrying at -30º under pressure 130 mbar for 72 h. The dried extracts were preserved at -20º [19,20].

The effect of PWC extract on cell viability of HepG2 cells for determining non-toxic concentration was measured using sulforhodamine B colorimetric assay (SRB assay) [26]. HepG2 cells (25 000 cells/well) were seeded in to 96-well plate and incubated at 37º and 5 % CO2 for 24 h. The combinations of non-toxic concentration of extracts (0.01-1 mg/ml) and 6 μg/ml AFB1 were also treated and incubated for 24 h. Cell viability was compared with 0.12 % DMSO group as % viability of control.

Intracellular ROS production in HepG2 cells was measured using dichlorofluorescein (DCF) assay [27]. Cells (4×104 cells/well) were seeded into black 96-well plate and incubated at 37º and 5 % CO2 for 48 h. Then, cells were washed twice with PBS before incubating with 50 μM DCFH-DA diluted in PBS for 45 min. The fluorescence intensity as relative fluorescence units was read at 485 (excitation) and 528 (emission) nm, respectively. Percent intracellular ROS production of control was calculated and compared to 0.12 % DMSO group.

Cells (5×105 cells/well) were seeded into 6-well plate and incubated at 37º and 5 % CO2 for 24 h. Then, the cells were treated with substances and then incubated for 24 h. They were harvested by 0.05 % trypsin-EDTA. PBS was added into cell pellet. Then, it was sonicated for 60 s twice. The solution was centrifuged at 4º, 9000 rpm for 10 min and supernatant was kept at -80º to examine enzyme activities and glutathione content. Protein content was measured by Bradford assay [28]. Regarding GSH content, the reaction was measured change of DTNB into 5-thio-2-nitrobenzoic acid (TNB) [29]. GPx activity was determined by measuring the reduction in NADPH concentration [30]. Glutathione reductase (GR) activity was determined by measuring the decrease of NADPH concentration resulted from GR-catalysed GSSG to GSH [31]. GST activity in the cell lysate was also determined using Sigma GST assay kit.

HepG2 cells were seeded into 100 mm dishes (6×106 cells) and incubated at 37º and 5 % CO2 for 24 h. Each dish was treated with test compounds for 24 h. Then, the cells were incubated with 4 μg/ml CytB for 48 h. Cells were harvested by 0.05 % trypsin-EDTA and centrifuged at 1500 rpm for 10 min and the cell pellet was resuspended in 5.6 mg/ml KCl hypotonic solution and centrifuged at 1500 rpm for 10 min. Samples were fixed by dropping 10 ml fixative solution (3:1 methanol:acetic acid) followed by spinning at 1500 rpm for 10 min. Cell slide was dried and stained with 10 % Giemsa stain for 15 min. Number of micronuclei was counted under an inverted light microscope at 300X. The frequency of micronuclei in 300 binucleated cells was evaluated (n=3) [32].

The contents of bioactive components TPC, TFX and TAC of the PWC extracts are shown in Table 1. The TPC content of PWC extracts was 161.65±1.80- 217.07±2.29 μg gallic acid/mg. When compared to each solvent group, both cob and boiled seed DI water extract contained higher phenolic content than the 70 % acetone extract.

Table 1: Bioactive Compounds and Antioxidant Activity of the PWC Extracts

Regarding the content of bioactive compounds and antioxidant activity, corn cob DI water extract was selected for screening on AFB1-induced toxicity in HepG2 cells due to the high content of bioactive compounds and antioxidant activity in the extract. Concentration sin the range of 0.1-3 mg/ml of extract was applied to HepG2 cells for 24 h. Fig. 1A showed the effect of PWC cob extract at different concentrations on % cell viability and the results showed that cell viability was significantly increased after treatment with 0.1-1 mg/ml PWC cob extract with % viability values of 121.17±7.41, 147.38±15.94, 123.55±11.04 and 121.17±10.22, respectively (p<0.05). On the contrary, high concentrations of 2 and 3 mg/ml PWC cob extract resulted in significantly reduced the % cell viability to 91.43±6.48 and 60.64±7.76%, respectively (p<0.05). 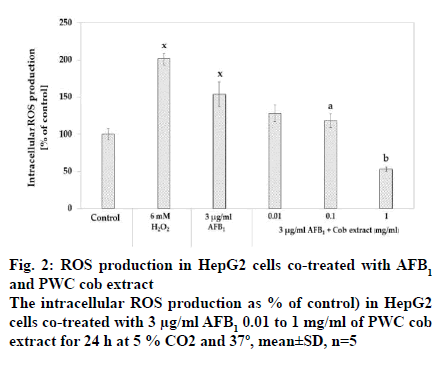 Oxidative stress is the main mechanism of AFB1- induced toxicity because the production of free radicals is induced during AFB1 metabolism by CYP450 and AFB1-8,9-expoxide as well. These free radicals could damage lipids, proteins, carbohydrates and DNA and, thus, contribute to cell injury and DNA damage, leading to liver carcinogenesis [3,5]. Numerous studies confirmed that phenolics-rich plants were capable of reducing AFB1-induced toxicities. To illustrate, ginger extract enhanced antioxidant enzyme activities and reduced hepatotoxicity induced by AFB1 in an in vivo study [33]. In addition, there are studies displayed that anthocyanin and anthocyanin-rich plants showed the ability to reduce AFB1 toxicities via alleviation of phase I and II metabolism, chromosome aberration, biomolecule synthesis, DNA fragmentation and oxidative stress in in vivo studies [10,34]. Regarding flavonoids, flavonoid fraction of Rhus verniciflua extract increased the activity of ROS-detoxifying enzymes [35]. Consequently, phenolics, flavonoid and anthocyanin assured to reduce AFB1 toxicity and antioxidant properties clearly showed protective effects of AFB1-induced toxicity.

This study was aimed at investigating whether PWC extract was able to protect AFB1-induced cytotoxicity, oxidative stress and micronucleus in HepG2 cells. After three parts (cob, seed and boiled seed) of PWC were extracted with DI water and 70 % acetone, the contents of bioactive components such as phenolics, flavonoids and anthocyanins were determined. The TPC was 133.09-217.07 μg gallic acid/mg, flavonoid content was 0.17-13.76 μg quercetin/mg and anthocyanin content was 19.20-142.94 mg cyanidin-3-glucoside/l in these PWC extracts. The antioxidant activities were measured by ORAC (1241.75-2138.51 μM trolox/mg) and FRAP (9.21-477.14 μM trolox/mg). Bioactive compounds TPC, TFC and TAC and antioxidant activity seemed to depend on part of PWC and types of solvent. From these investigations, PWC cob DI water extract was selected for studying the effects on AFB1-induced toxicity in HepG2 cells due to their optimized content of bioactive compounds and antioxidant activity.

HepG2 cells were used as a model in this study. These were widely accepted as a model for drug metabolizing and liver toxicity studies. Despite some limitations (ex., low activities of phase I and II metabolizing enzymes), their activities are rather stable, not relying on passage [36]. Hence, HepG2 cells were commonly used for studying AFB1-induced hepatotoxicity (ex., studying the effects of zinc on liver toxicity and DNA damage induced by AFB1 and studying the effects of carotenoids inhibiting molecular toxicity in AFB1- induced HepG2 cells) [37,38]. To evaluate the cytotoxicity of cob extract for choosing a non-toxic concentration, HepG2 cells were incubated with cob extract for 24 h and then measured using SRB assay. The results found that 0.1-1 mg/ml cob extract not only non-toxic but also increased viability of HepG2 cells.

Regarding the effect of cob extract on AFB1-induced cytotoxicity, the results revealed that 0.5 and 1 mg/ml cob extract slightly increased the % viability in AFB1- treated HepG2 cells (p<0.05). The small influence on cell viability was also reported in prior studies; zinc and Allium fistulosum extract minimally increased viability of AFB1-treated HepG2 cells [37,39]. Important as well is that this protection effect was also found in other extracts containing phenolics, flavonoids and anthocyanins [33,38].

For antioxidant studies, intracellular ROS production, GSH content, GPx, GR and GST activities, the reliable markers for oxidative stress, were examined. The results indicated that after incubation with 3 μg/ml AFB1 for 24 h, intracellular ROS production was induced while GSH content, GPx, GR and GST activities were reduced compared to the control group. These findings confirmed that AFB1 could cause oxidative stress in HepG2 cells (fig. 2, 3 and 4). The effects of AFB1 on decreasing the GSH content and induction of ROS corroborate the findings of several previous studies performed under similar conditions, 3 μg/ml AFB1 and incubated for 24 h [33,34,37,39]. 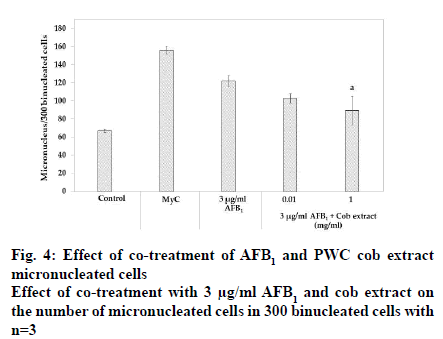 The most interesting finding is that the PWC cob extract could reduce ROS production induced by AFB1 in a dose-dependent manner, especially 1 mg/ml cob extract was more effective in reducing ROS by more than 50 % of that produced by AFB1 group. In addition, PWC cob extract could also increase glutathione content and GPx activity in a dose-dependent manner while only 0.01 and 0.1 mg/ml PWC cob extract were capable of increasing GST activity as a function of cellular detoxification against xenobiotics and against oxidative stress. In addition, 1 mg/ml cob extract was able to activate GR activity. These results agreed with those of a previous study in which in vivo antioxidant activity played a critical role in ameliorating diseases, such as diabetes, Opisthorchis viverrini infection and diabetic cataract [14,40,41].

In conclusion, co-treatment of 3 μg/ml AFB1 with 0.01-1 mg/ml of PWC cob extracts clearly showed antioxidative stress induced by AFB1 through reduction of ROS production and induction of GSH content, GR and GPx as well as GST activities. Furthermore, PWC extract also lowered micronucleus count and cytotoxicity. Both induction of oxidative stress and genotoxicity are the main mechanisms leading to HCC, therefore, PWC extracts could contain anticancer substances, the molecular mechanism of which needs to be explored further.