Sulfated polysaccharides from marine algae are one of the commercially beneficial compounds with a range of pharmaceutical and biomedical applications. They are testified to be effective against free radicals and related health complications. This study aims to determine the antioxidant potential of the sulfated polysaccharide from Sargassum myriocystum, followed by its purification and structural characterization. Amount of extract obtained was 5% from 10 g of plant material. The carbohydrate and sulfate content were found to be 31 and 0.34 mg/10 g of plant material, respectively. Total sulfated polysaccharide extract showed a good radical scavenging activity at lower concentrations. The active principle from the total sulfated polysaccharide was fractionated in anion exchange and gel filtration columns followed by structural characterization using Fourier transform infrared and nuclear magnetic resonance spectroscopy. Fraction 12 closely matched with the Fourier transform infrared and nuclear magnetic resonance spectra of fucoidan. Based on the results obtained, we conclude that sulfated polysaccharide from Sargassum myriocystum is identified as Fucoidan with potential radical scavenging activity compared to butylated hydroxyl toluene.

Sulfated polysaccharides (SP) are the anionic polymers that occur in most of the macroalgal community. Agar and carrageenan are those SPs that occur in the red algae, whereas fucoidan represents the SPs from brown algae. Green algae have a heterogeneous class of SPs with different sugar residues such as glucuronoxylorhamnans, glucuronoxylorhamnogalactans, and xyloarabinogalactans [1,2]. Sulfated polysaccharides are considered as a potential bioactive principle, and their biological activities include nociception, immunomodulation, antitumor, antiviral etc [3]. They are effective against viruses like herpes simplex virus (HSV) type 1 and 2, human immunodeficiency virus (HIV), human cytomegalovirus [4]. Edfranck de Sousa et al. demonstrated the HO-1 pathway-mediated inflammatory processes brought about by sulfated polysaccharides [5]. The exploration for alternate drugs for safe and effective anticoagulation ended up in SPs mainly from macroalgae, since heparin usage produced primary side effects like bleeding, heparin-induced thrombocytopenia [6].

Reactive oxygen species (ROS) induce membrane lipid peroxidation and cellular damage by destruction of cellular macromolecules, resulting in cell death. Antioxidants are the possible remedy to quench these free radicals and its deleterious reactions [7]. Antioxidants delay or prevent the oxidation, and it is carried out either by scavenging ROS or inhibiting ROS production. The most commonly used antioxidants such as butylated hydroxyanisole (BHA), butylated hydroxytoluene (BHT), propyl gallate (PG), and tertbutylhydroxytoluene (TBH) are reported to be toxic beyond certain concentrations [8].

Marine flora and fauna, bacterium, and higher plants were targeted for natural antioxidants by pharmaceutical industry to replace synthetic antioxidants. Abundance of bioactive compounds led the medical and biochemical research to shift towards marine algae and algae-derived products [9].

SPs from Sargassum wightii have proved to be hepatoprotective [10] and Sargassum filipendula has antioxidant and antiproliferative activity [1]. Our previous reports on S. myriocystum showed an appreciable radical scavenging ability in water extract and gave a preliminary idea to target sulfated polysaccharides from this species [11]. The present study aims to determine the antioxidant potential of the SP from Sargassum myriocystum followed by purification and characterization of the active principle.

Extraction of sulfated polysaccharide was carried out according to the method described by Silva et al. [12], where in 10 g of algal powder was incubated overnight with acetone to remove lipid and pigments. The residue was then dissolved in 5 volumes of 0.25M NaCl, and the pH was monitored periodically and adjusted to 8 using NaOH. Trypsin (10 mg) was added to the content for proteolysis and incubated for 24 h. After incubation, the content was filtered through cheese cloth, and the filtrate was precipitated using ice-cold acetone under gentle agitation at 4°C. The precipitate formed was centrifuged at 10 000 g for 20 minutes, and dried under vacuum. The dried total sulfated polysaccharide extract (SPE) was resuspended in distilled water and used for further analysis.

The DPPH radical scavenging effects of SP extract were determined as described by Yan and Chen [15] using butylated hydroxyl toluene as positive control. Briefly, 50 μl of DPPH solution in methanol (0.16 mM) was added to 50 μl aliquot of sample. The mixture was vortexed for 1 min and kept at room temperature for 30 min in dark. The absorbance of all the sample solutions was measured at 517 nm. The scavenging effect (%) was calculated by using the formulae given by Duan et al. [16], which is given as % inhibition=((absorbance of blank-absorbance of test)/absorbance of blank)×100.

Deoxyribose non-site-specific hydroxyl radical scavenging activity of total SP extract was determined as described by Chung et al. [17]. Briefly, 2.0 ml aliquots of sample was added to the test tube containing reaction mixture of 2.0 ml FeSO4.7 H2O (10 mM), 0.2 ml EDTA (10 mM), and 0.2 ml deoxyribose (10 mM). The volume was made up to 1.8 ml with phosphate buffer (0.1 M, pH 7.4) and to that, 0.2 ml H2O2 (10 mM) was added. The mixture was incubated at 37º in dark for 4 h. After incubation, 1 ml of TCA (2.8%) and TBA (1%) were added to the mixture, and then, were left to stand under boiling water bath for 10 min. The content was transferred into a multiwell plate, and absorbance was measured at 532 nm. If the mixture was turbid, the absorbance was measured after filtration. Scavenging activity (%) was calculated using the formula, % Inhibition=((Blank-Test)/ Blank)*100, where, blank denotes the content without sample and test with the sample. The results were compared with butylated hydroxyl toluene as positive control.

Total SP extract (500 mg) was dissolved in 0.9% NaCl and fractionated using DEAE-Sephadex A-50 column, eluted with a step gradient of 0.4 M to 2 M NaCl. The carbohydrate-positive fractions were identified using the method described by Dubois et al. [13]. The elution profile showed five regular peaks, and they were pooled into five major fractions (F1–F5) and concentrated using sucrose.

Radical scavenging effect of natural antioxidants could be evaluated using DPPH, a free radical donor, under in vitro conditions [18]. As shown in Table 1, concentration of the SP level was too low (25 μg) to scavenge DPPH free radicals, and then, there was a linear increase in free radical quenching activity with an inhibition of 33.4% at 100 μg. Hydroxyl radical can react with any of the biomolecules such as lipids, polypeptides, saccharides, nucleotides, organic acids, which makes it more deleterious than other radicals [19]. The SP from S. myriocystum thus gains importance by showing a potent scavenging activity against ?OH radical. The results were in concurrence with our previous study using different solvent extracts [11]. The SP extract showed a linear increase in activity from concentration of 25 to 75 μg, and the inhibition ability decreased from 22 to 9% at 100 μg (Table 1).

DPPH=2-Diphenyl-1-picrlyhydrazyl *The values are expressed in % Inhibition. The results are analyzed by student?s t-test (n=6) Fig. 1: Separation of sulfated polysaccharide by DEAE?Sephadex (A-50) column chromatography.
Absorbance at 490 nm for the presence of carbohydrate

, Concentration of NaCl in molarity

. The fractions were analyzed for presence of carbohydrates by Phenol-sulfuric acid method (n=2). The marked fractions are pooled, concentrated, and named as major fractions 1?5 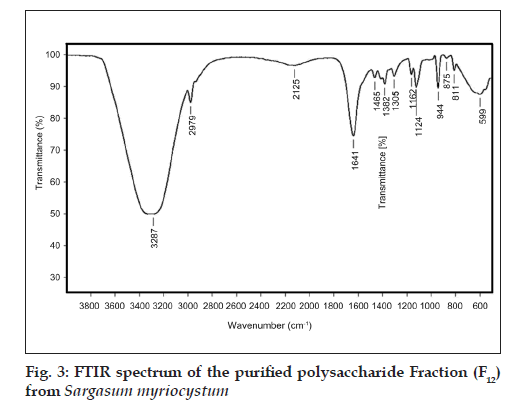 NMR spectroscopy is a structural prediction tool for any regular and complex polysaccharides. Intense signals obtained from 1H NMR spectroscopy show presence of hydrogen atoms at anomeric carbon (5.4) and C2-C4 hydrogen atoms of a carbohydrate moiety (figs. 4a and 4b). Fig. 4c depicts 13C NMR peaks showing sharp signals at finger print regions for O-acetyl carbon and anomeric carbon (22.21 and 179.71, respectively). The results obtained from the FTIR and NMR analysis were completely in correlation with the reports on fucoidan, a sulfated polysaccharide commonly obtained from brown algae. The antioxidant efficacy of the analyzed and structurally predicted fraction 12 showed a 63% inhibition of hydroxyl radical, 14% of DPPH free radical scavenging activity. The activity obtained was found to be equal with the activity shown by BHT (fig. 5). 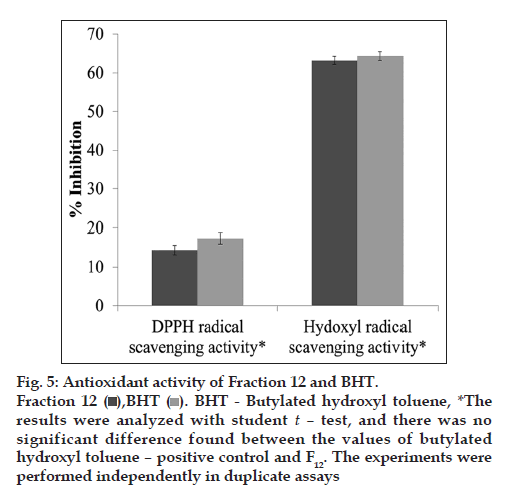 The diversified pharmaceutical and biomedical applications of algae make them a valuable group of marine flora [9]. They are widely used in many Asian and European countries for treating health-related issues [20]. Yield of extract was found to be excess and not in correlation with the results of Yan et al. [21]. This may be due to crude extraction with NaCl before purification.

Hydroxyl radical possesses the highest one electron reduction potential (2310 mV) and can react with all biomolecules in living organisms at the second order rate constants of 109 to 1010 mol/s [22], which makes it more deleterious. DPPH is a stable free radical with the maximum absorbance at 517 nm. When a proton donating antioxidant is added to it, the absorbance decreases, which helps in estimating the radical quenching ability of different antioxidant compounds. The total SP was found to show an appreciable ·OH radical and DPPH radical scavenging effect even at a very low concentration of 75 μg, which is a significant observation, since Kim et al. showed a low activity with the SPs from S. fulvellum [23]. The increased radical scavenging ability is because of the high sulfate content in total SP, which was supported by Rocha de Souza et al. [24]

Marine algae are accumulated with a bunch of useful bioactive compounds that can be isolated and unearthed by carrying out various purification steps. The work was further directed towards the isolation, and purification of sulfated polysaccharides from S. myriocystum was achieved using ion exchange and gel permeation column chromatography. SP is a polymer and is highly anionic in nature. Hence, we assume that its elution may be achieved at the higher concentration of NaCl, and as expected, it was eluted at the later stages of the fractionation with an eluent concentration nearly 2 M. The fractions from ion exchange column were purified by gel permeation chromatography, which resulted in 14 carbohydrate-positive fractions. The molecular weight of SPs plays a major role for its bioactivity, and low molecular weight compounds isolated by Song et al. was found to have potential antioxidant activity [25]. The presence of sulfate in all the 14 fractions purified from gel permeation chromatography was validated by FTIR analyzes.

Identification of sulfate moiety in the obtained fractions is one of the key information to substantiate that, purified fraction is SP, and this was achieved using FTIR spectroscopy. Sulfate group at position C4 of SP purified from S. myriocystum was represented by 875 cm-1. Peaks at 1350 cm-1 and 944 cm-1 indicate the vibration of S=O stretching and C-O-C, respectively [26]. The presence of O-Acetyl group was supported by the asymmetric stretch at 1641 cm-1, [27] and stretch vibration of –CH was identified by signal at 2979 cm-1. [5] FTIR results were totally in agreement with the reports on structural analysis of Fucoidan, by Patnakar et al. [27].

The structural characterization of the compound obtained from fraction 12 made us to infer that it could be fucoidan (fig. 6). The substantial activity of the fraction F12 containing fucoidan explicates that it can be a possible replacement for chemical antioxidants. Fucoidan (sulfated fucans) is one of the biologically active sulfated polysaccharide with fucose as the primary monosaccharide units. Antiviral, antioxidant, antiinflammatory and anticoagulant activities are some of the notable biological activities demonstrated by these sulfated polysaccharides [32]. They possess complex structures, and its uniqueness attracts many researchers to deduce the structure activity relationship in every species [33]. 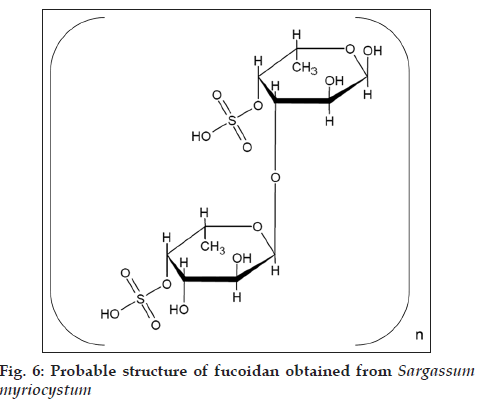 In conclusion, total sulfated polysaccharide in Sargassum myriocystum showed a potential free radical scavenging ability. The active principle responsible for the antioxidant activity was purified and was characterized. Structural characterization of sulfated polysaccharide fraction revealed that the compound, which we were looking for, is probably fucoidan. The activity of the pure compound showed an equally good DPPH and hydroxyl radical scavenging activity when compared to the standard. Preparative approach in isolation and purification of the compound may be helpful in obtaining sufficient amount of the active principle and determination of its radical inhibiting capacity along with its median inhibitory concentration. Further studies are required to determine the molecular weight of the complete polysaccharide by mass spectrometry along with a complete structural data using 2D NMR spectroscopic techniques. Display of low LD50 concentration and toxicity along with reports on efficient absorption and excretion of fucoidan may support the oral administration of this compound as treatment for various oxidative stress and age-related diseases.