The present study focuses on the efficiency of high-performance thin layer chromatography and gas chromatography-mass spectrometry analysis in qualitative and quantitative analysis of triterpenoid from the terpene fraction of hexane extract of Simarouba glauca leaves. The total terpenoid content of the hexane extract was assessed which shows that 73.69 % of the extract content is terpenoid. The terpene fraction extracted in petroleum ether from the hexane extract of Simarouba glauca leaves was subjected to gas chromatography-mass spectrometry and high-performance thin layer chromatography analysis. Gas chromatography-mass spectrometry analysis results indicated seventeen compounds out of which only one was triterpene (Squalene an important bioactive triterpenoid). In high-performance thin layer chromatography the separation was achieved by using hexane:ethyl acetate in a 5:5 proportion as mobile phase and anisaldehyde sulphuric acid reagent was used for derivatization which imparted violet color to the triterpenoid containing bands. Detection and quantification of betulinic acid and other triterpenes was done by densitometric scanning at 525 nm. Betulinic acid produced compact spots at Rf 0.66. Linear range of betulinic acid was prepared using concentrations 1-7 μg/spot with a correlation coefficient R2 and standard deviation of 0.96004 %±19.68 % respectively. The results indicated the presence of 10 triterpenoids showing different Rf values including betulinic acid. This study confirmed the presence of betulinic acid in the terpene fraction of the hexane extract of Simarouba glauca leaves.

The quassinoids shows strong anticancer property. The identified phytochemicals include glaucarubol, glaucarubinone,    scopoletin,    canthin-6-one, squalene, tricaproin etc. which possess various biological activities and many of which have been patented[6-10]. Recent works have reported and isolated many different triterpenes from various parts of S. glauca but the presence of betulinic acid which is a well-known triterpene having various biological activities is not yet reported from this plant. Betulinic acid is a   pentacyclic   triterpene acid which is found in the bark of various species of plants. As a natural compound it shows wide range of pharmacological activities because of its low toxicity which includes inhibition of Human Immunodeficiency Virus (HIV), antibacterial, antimalarial, anti-inflammatory and antioxidant properties. Betulinic acid shows potent anti-maturation activity against HIV-I[11]. Fulda et al.[12] identified betulinic acid as a new cytotoxic agent against neuroectodermal tumor cells including neuroblastoma,    medulloblastoma,     glioblastoma and Ewing’s sarcoma cells, which represent the most   common   solid   tumors   of   childhood.   Park et al.[13] reported that the anticancer effect of betulinic acid is mediated through reactive oxygen species dependent cell cycle arrest and apoptosis. Betulinic acid extracted from the leaves of Vitex negundo   demonstrated   antibacterial    activity against Bacillus subtilis at a concentration of 1000 ug/disc with a zone of inhibition of 18.8 mm2[14]. In vitro antiplasmodial activity (half maximal inhibitory concentration (IC50)) of   the   betulinic acid was   studied   and   isolated   from   the   root bark of the Tanzanian tree against chloroquine-resistant (KI) and sensitive (T9-96) Plasmodium falciparam were found to be 19.6 ug/ml and 25.9 ug/ml   respectively[15].   Recio   et    al.[16]   reported the analgesic and anti-inflammatory activity on betulinic acid isolated from Diospyros leucomelas. Zuco   et   al.[17]   studied    the    anticancer    activity of betulinic acid for selective tumor growth inhibition without damaging the normal cells. The present study was aimed to find out the qualitative and quantitative detection of various classes of triterpenes by using Gas Chromatography-Mass Spectrometry   (GC-MS)   and   High-Performance Thin Layer Chromatography (HPTLC) with special emphasize on betulinic acid. Fig. 1: Photograph of S. glauca plant from which the leaves were collected

All chemicals and solvents used were of analytical grade and obtained from Nice® Chemicals Ltd. 30 g of dried leaf powder was subjected to Soxhlet extraction with 250 ml of hexane. Extraction was carried out for 9 cycles and temperature was maintained at 65°. The color of the extract was dark green. The extract was collected and cooled at room temperature filtered through filter paper and poured in glass petri dishes and then evaporated at 40° using hot air oven. Dried extract was kept in desiccator for 2 d and stored at 5° in airtight containers until further use.

Extraction and quantification of terpenes:

The total terpenoid was extracted using standard protocol[18]. 100 mg of dried hexane extract was taken and soaked in 9 ml of ethanol for 24 h. The extract after filtration, was extracted with 10 ml of petroleum ether using separating funnel. The ether extract was separated in pre-weighed glass vials and waited for its complete drying. Ether was evaporated and the yield (%) of total terpenoids contents was measured by the formula

wti represents initial weight of the dried plant extract (100 mg) and wtf weight of the terpene fraction left after complete drying of ether. The dried terpenoid fraction (0.24 g) was dissolved in 10 ml hexane and used for GC-MS and HPTLC analysis.

Place 170 ml of methanol in 200 ml glass bottle and cooled it down in ice cube water bath. To the ice-cold methanol, 20 ml of acetic acid and 10 ml of sulphuric acid were added slowly and carefully and mixed well. Allow the mixture to cool to room temperature, then added 1 ml of anisaldehyde.

The GC-MS analysis was carried out using a 7890A Gas chromatograph equipped and coupled to a triple axis mass detector, DB-5MS 30 m×0.250 mm×0.25 mm thickness capillary column. The instrument was set to an initial temperature (oven temperature) of 40° for 5 m. At the end of this period, the rate of increase of temperature was 5°/min. Final temperature maintained was 280° for 10 m, 3 ul of sample was injected and the injector temperature was maintained at 280°. For GC-MS detection an electron ionization system with ionization energy 80 eV was used and helium was used as a carrier gas at a constant flow rate of 1 ml/m and pressure 7.0699 psi. The quantification of the components was based on the total number of fragments of the metabolites as detected by the mass spectrometer. The identification of the chemical components was carried out based on the Retention time (Rt) of each component compared with those of the National Institute of Standards and Technology 08 mass spectral libraries.

Chromatography conditions: Chromatography was performed on a 10×10 cm reactivated HPTLC Silica gel 60 F254 plates (Merck, Darmstadt, Germany). 10 μl, 30 μl, 50 μl and 70 μl of the samples and standard were separately applied to the plate by spotting on HPTLC plate using automatic TLC applicator Linomat-V with N2 flow (CAMAG, Switzerland), with a band width of 8 mm and 8 mm from the bottom. Scanning was performed with CAMAG scanner III at 525 nm with a speed of 20 mm/s. A slit dimension of 5×0.45 was employed. Linear ascending development was carried out in a 10×10 cm CAMAG twin glass tank pre-saturated with the mobile phase at room temperature. 10 ml of hexane:ethyl acetate in a 5:5 proportion was used for chromatographic development.

Detection and quantification: After development, plates were dried with a hair dryer and then derivatized in 200 ml of anisaldehyde sulphuric acid reagent in immersion device CAMAG and heated at 105° for 5 min. The concentration of betulinic acid present per spot of the plant extract applied was calculated from the standard curve obtained from the HPTLC analysis.

The results indicated that terpenes are the most dominant class of phytochemicals present in the leaves of S. glauca. The terpene content determined was 73.69 mg/100 mg which accounts for about 73.69 % of the total phytochemical content. The GC-MS analysis results indicated the presence of seventeen compounds out of which seven were terpenes. The chromatogram represents the peaks of detected compounds shown in fig. 2. Out of the seven terpenes three sesquiterpenes, two monoterpenes, one diterpene and one triterpene were identified (Table 1). The Rt, compound name and molecular formula are presented in Table 2[19-23]. The triterpenoid identified in GC-MS analysis was squalene. Squalene is a very important bioactive triterpenoid. Many steroids like cholesterol are squalene derivatives. An entire class of triterpenoids is represented as squalene group many of which have important bioactivities. Studies have suggested that squalene has a potential to decrease fibrosis induced as a result of atherosclerotic diet have been reversed by hydroxytyrosol and squalene, natural products from the minor fraction of virgin olive oil[24]. Squalene has been shown to have anti-oxidant activity in mammary epithelial tumor cells[25]. Studies have reported the anticancer property of squalene[26]. Ganbold et al.[27] reported a new amphiphilic squalene derivative improves metabolism of adipocytes differentiated from diabetic adipose-derived stem cells and prevents excessive lipogenesis.

Table 1: The Physical Properties of The Compounds Detected in The Gc-Ms Analysis of The Terpene Fraction of S. glauca Leaves

Table 2: The Name of The Iupac Name, Structure, Molecular Weight and Bio-Activity of The Terpenes Detected in Terpene Fraction Obtained From Hexane Extract of S. glauca Leaves in GC-MS Analysis

Fig. 2: GC-MS chromatogram of terpene fraction extracted in petroleum ether from hexane extract of S. glauca leaves. The peaks with their corresponding Rt are depicted in the chromatogram

The chromatographic analysis after derivatization with anisaldehyde sulfuric acid reagent showed the presence of 10 bands in violet color with different Retention factor (Rf) values indicating the presence of ten different compounds (fig. 3). Triterpenes produce violet and blue color when treated with anisaldehyde sulphuric acid reagent and heated at 105°[28]. The standard triterpene used here for validation was betulinic acid which also developed a violet color. Thus, ten different triterpenes were detected. Quantitative analysis of the betulinic acid was done by scanning the plates at 525 nm using CAMAG TLC scanner III equipped with win-CATS-V 1.2.3 software (CAMAG). The identification of betulinic acid was confirmed by superimposing the Ultraviolet (UV) spectra of the samples and standards within same Rf   0.66 window (Table 3). A calibration curve for betulinic acid was plotted with four known standard concentrations 1 µg, 3 µg, 5 µg and 7 µg by spotting 10 µl, 30 µl, 50 µl and 70 µl of the standard solution on HPTLC plate respectively with a band width of 8 mm. Each concentration peak area in the plant extract was plotted against the concentration of betulinic acid spotted or injected. The linear regression of standard curve was determined with R2=0.96004 %±19.68 % as shown in fig. 4.

Table 3:  The Rf Value, Absorbance Area and % Area of Ten Peaks Corresponding To Triterpenes Obtained  From The Terpene Fraction of S. glauca Leaves After Derivatization With Anisaldehyde Sulphuric Acid Reagent At 525 nm

Note: The concentration of betulinic acid obtained upon loding 10-70 μl of the terpene fraction obtained from hexane extract of S. glauca leaves, calculated according to the peak height and peak area

Table 4: The Concentration of Betulinic Acid Obtained From The Densitogram 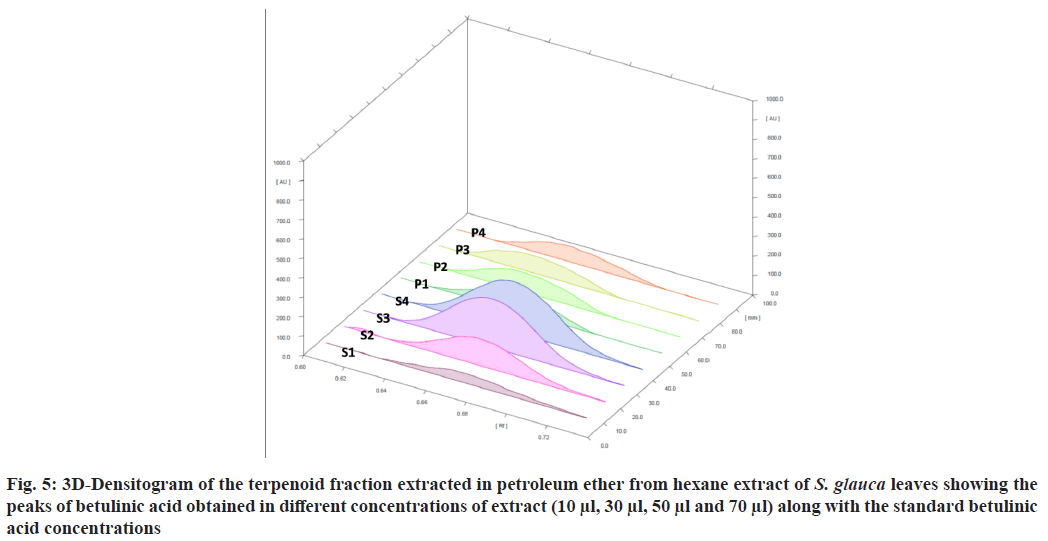 Fig. 5: 3D-Densitogram of the terpenoid fraction extracted in petroleum ether from hexane extract of S. glauca leaves showing the peaks of betulinic acid obtained in different concentrations of extract (10 μl, 30 μl, 50 μl and 70 μl) along with the standard betulinic acid concentrations

To conclude, the present study indicates that GC-MS is not an effective tool for detection of triterpenes when compared to HPTLC as HPTLC showed the presence of ten triterpenes while GC-MS could detect only one triterpene (Squalene). The   identification of these triterpenes requires further analysis using either Mass Spectroscopy (MS) in   combination with HPTLC or other techniques like Liquid Chromatography Mass Spectroscopy (LCMS). The study for the best of our knowledge newly reports the presence of betulinic acid in the terpene fraction extracted using petroleum ether from hexane extracts of S. glauca leaves. Thus, leaves of S. glauca can be used as a source for the extraction of betulinic acid which is a potent anti-cancer agent. Future works can focus on the extraction and identification of different triterpenes from the hexane extracts of S. glauca which will help to find out the other biologically active triterpenes and similar or modified versions of betulinic acid which can be exploited for the therapeutic purpose. 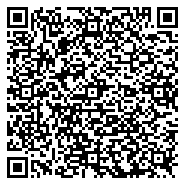