Zerumbone (IUPAC: 2,6,9,9-tetramethyl- [2E,6E,10E]- cycloundeca-2,6,10-trien-1-one) is a sesquiterpene from the edible plant Zingiber zerumbet Smith. It suppresses various tumours in a potent manner [1]. Rahman et al. [2] has reviewed and comprehensively listed anticancer properties of zerumbone. It possesses antinociceptive, antiinflammatory, antiulcer, antihyperglycaemic, immunomodulator and antiplatelet activities [2-4]. Zerumbone has been reported from different species of Curcuma, Alpinia and Zingiber from the family Zingiberaceae [2]. A range of variation in contents have been reported from 0.03 to 84.80 % in the family (Table 1) [5-26]. It has been admitted that this differences in zerumbone content in the plants were not due to geographic or ecological variations but because of their chemotypes [2,4].

Table 1: Distribution of zerumbone in members of family zingiberaceae

India is the largest producer of turmeric in the world (93.7 % of the total world production), which is cultivated in 1 50 000 hectares in India [27,28]. In this context, there is a need to study and identify high yielding chemotypes for economically viable genus Curcuma longa (family: Zingiberaceae) and its cultivars. Use of turmeric as blood purifier, antiseptic and even for skin conditioning is mentioned in Ayurveda. Also the plant has been well-documented for its wide range of pharmacological properties [29,30]. The species is chiefly studied for its phytoconstituents curcumin and its pharmacological properties [31-33]. Among the several other constituents present in the plant Gantait and coworkers [30] reported presence of zerumbone in C. longa. Apart from this there are no reports of zerumbone from C. longa (Table 1). However, to the best of our knowledge, there have been no attempts to validate and quantify zerumbone content from C. longa cultivars from India, using reversed-phase high performance liquid chromatography (RP-HPLC) analysis.

The rhizomes were air-dried at room temperature (28±5°) until steady weight was observed. The material was then ground to fine powder in a laboratory grinder. One percent extract was prepared by dissolving 1 g plant powder in 100 ml methanol by keeping it for 24 h. The extracts were filtered, re-volumized and passed through 0.2 μm nylon filters. The extracts were stored at –4° until use.

All solvents and chemicals used during the study were of HPLC grade. HPLC grade zerumbone (≥98.0 % pure) Sigma-Aldrich, Mumbai, India, was used from gifted sample. An accurately weighed standard zerumbone was dissolved in known amount of methanol to obtain mg/ml concentration of stock. The stock solution was diluted to obtain desired working concentrations (2, 10, 25, 50, 100, 200 μg/ml).

The RP-HPLC analysis was performed on a chromatographic system consisting of a quaternary pump, manual injector and dual λ UV absorbance diode array detector. The built-in chromatographic software system was used for data processing. Chromatographic separation was achieved on a Luna, C18 (5 μm) reversed-phase column (150×4.6 mm, 5 μ). Mobile phase consisting of acetonitrile, methanol and 0.01 M potassium dihydrogen orthophosphate (25:55:20) was used for separation with injection volume 20 μl. The flow rate was 1 ml/min and the detection wavelength was set to 254 nm [34]. The analysis time was 10 min for both standards and samples.

The validation parameters such as accuracy, precision, limit of detection (LOD), limit of quantification (LOQ), linearity, range and system suitability test were assessed by three replicate injections of standards at appropriate concentrations. The results were subjected to statistical analysis and are represented as mean±SD of three independent injections unless mentioned.

Accuracy of the method was determined by recovery analysis of the known amounts of standard zerumbone (2, 10, 50 μg/ml) added to a placebo sample. The samples were analysed (3 replicates) and the amounts were calculated from the calibration curve. The recovery was presented in percent accuracy (calculated concentration/nominal concentration×100) and it ranged from 98.60 to 100.63 % indicating acceptable range as per ICH recommendations for the given method [35].

Precision of the method was measured according to ICH recommendations [35]. Three injections of zerumbone at three different concentrations (2, 10, 50 μg/ml) showed excellent repeatability (intra-day precision), and relative standard deviation (RSD) was within 3.76 %. Inter-day precision was determined by measuring intra-day variation for triplicated determination of the same standard zerumbone concentrations (2, 10, 50 μg/ml). The lower RSD values indicated the acceptable reproducibility of the method.

The LOD and LOQ were calculated based on the signal:noise ratio. The LOD for zerumbone was 0.04 μg/ml and LOQ was 0.12 μg/ml using above chromatographic injections. The system suitability test was performed for the above chromatographic system used for analysis. This was performed before sample analysis to pass the system suitability limits. The evaluation was done using standard zerumbone 200 μg/ml concentration. The capacity factor (k’) was 0.711 indicating that the zerumbone peak is well resolved with respect to the void volume. The tailing factor (T) for zerumbone peak was 1.332, reflecting good peak symmetry. The resolution (Rs) for the principle peak was 1.026, indicating good separation of the analyte. The theoretical plate number (n) was 1202.95 for the column used in the study (150×4.6 mm i.d., particle size 5 μm), thus demonstrating acceptable column efficiency. The RSD of three consecutive injections of 10 μg/ml concentration of zerumbone was 0.707 %, indicating fair injection repeatability. All these results assure the adequacy of the method for analysis of zerumbone in C. longa.

The linear regression data for the calibration plots showed a good linear relationship over a six concentration range from 2 to 200 μg/ml for zerumbone with respect to the peak areas. It was observed from the data that, the linearity response of zerumbone is linear between lower to higher concentration levels (Figure 1 and 2A). Regression Eqn. was obtained using least-square method and the standard deviation did not exceed 2 % level. 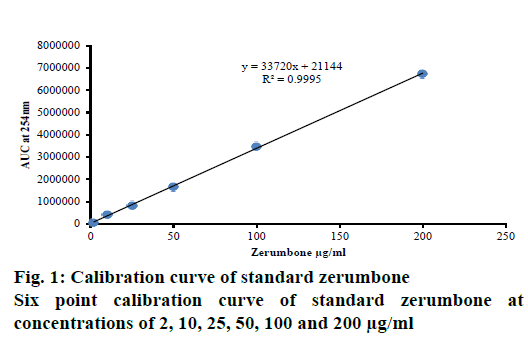 Six different concentrations (2, 10, 25, 50, 100 and 200 μg/ml) of standard zerumbone were detected at 254 nm wavelength using RP-HPLC technique. The analysis yielded profiles with a retention time of 5.735±0.28 min (Figure 2A). The linearity and sensitivity of the method was analysed using the set conditions, three independent calibration curves for the compound was plotted correlating the detector signals with concentrations of zerumbone (Figure 1). Linear calibration curves for standards were obtained with coefficient of determination (R2) not more than 0.999 for standard zerumbone (Figure 1). Results of placebo and blank were also recorded for the study (fig 2B and C). The applicability of the present method was analysed using eleven cultivars of C. longa. The extracts obtained from fresh and dry rhizomes of eleven C. longa cultivars were subjected to the analysis. The zerumbone content determined using RP-HPLC method ranged from 0.383±0.019 mg/g (CUR-G) to 2.179±0.109 mg/g (CUR-A) on fresh weight basis and from 3.209± 0.160 mg/g (CUR-C) to 8.333±0.417 mg/g (CUR-I) on dry weight basis (Figure 2D, E and F). This range was within the content observed in other species earlier studied from the same family (Table 1). Members of genus Curcuma showing lower zerumbone content compared to Zingiber, Alpinia and Xylopia species (Table 1). However, the present study showed higher zerumbone content in different cultivars of C. longa.

Of the eleven-accession evaluated for zerumbone content, Selam accession (CUR-A) yielded higher on fresh weight basis whereas, Alleppey accession (CUR-I) was higher on dry weight basis (Figure 3). It should be noted here that the lowest content on dry weight basis is equal to or more than the highest content obtained in fresh weight basis (Figure 3). The percent differences between the two in all the eleven cultivars were ≥50 %. Accession CUR-G had showed a higher percent difference of 92 % in content from fresh and dry weighed extracts followed by CUR-B (81 %), CUR-I (79 %) and CUR-F (75 %) with ≥70 % difference.

The content observed in C. longa cultivars in present study is comparatively less than that of earlier reports from Z. zerumbet (Table 1). The content observed hereto in the literature are based on gas chromatography-mass spectrometry analysis, our result presents for the first time a validated RP-HPLC method for quantifying zerumbone from C. longa, especially different cultivars. These cultivars represent the agroclimatic regions of their cultivation in India and can also suggest its utilization in that respective region. Such study can provide a data to compare use of high yielding C. longa cultivars to the risk of related diseases.

The study provides comprehensive information on zerumbone content in members of family Zingiberaceae. The validated method for quantification of zerumbone could be used consistently with greater reliability. Among the C. longa cultivars, Alleppey (CUR-I) followed by Bawdhan (CUR-G), Rajampeth (CUR-K) and Selam (CUR-A) had zerumbone content over 0.5 %. This is in the lights of further pharmacological utility of these cultivars.

Authors thank the Director, AIB, Amity University, Mumbai, HOD, Biotechnology and HOD, Botany, Shivaji University, Kolhapur for their support. Thanks are also due to Dr Jaykumar Chavan, Department of Botany, YCIS, Satara, India for gifting standard of zerumbone. NVP is indebted to the Principal and HOD, Department of Botany, The New College, Kolhapur.