Mucuna pruriens Linn. is an important medicinal plant used for treatment of Parkinson’s disease and many others in ancient Indian medical system. L-DOPA extracted from seeds of Mucuna is a constituent of more than 200 indigenous drug formulations and is more effective as drug than the synthetic counterpart. A densitometric high performance thin-layer chromatographic (HPTLC) method was developed for quantification of L-DOPA content present in the seeds extract. The method involves separation of L-DOPA on precoated silica gel 60 GF254 HPTLC plates using a solvent system of n-butanol-acetic-acid-water (4:1:1, v/v) as the mobile phase. Quantification was done at 280 nm using absorbance reflectance mode. Linearity was found in the concentration range of 100 to 1000 ng/spot with the correlation coefficient value of 0.9980. The method was validated for accuracy, precision and repeatability. Mean recovery was 100.89%. The LOD and LOQ for L-DOPA determination were found to be 3.41 ng/spot and 10.35 ng/spot respectively. The proposed HPTLC method was found to be precise, specific and accurate for quantitative determination of L-DOPA. It can be used for rapid screening of large germplasm collections of Mucuna pruriens for L-DOPA content. The method was used to study variation in fifteen accessions of Mucuna germplasm collected from different geographical regions.

Mucuna pruriens Linn. (Fabaceae), commonly known as Kewanch or Kaunch, Atmagupta and Velvet bean, is a climbing annual legume, endemic in India and in other parts of the tropics including Central and South America. About fifteen species of Mucuna are found in the forests and plains of India. It is useful as a green manure and cover crop and is also grown for its pods and young leaves, which are used as vegetable and fodder [1]. All the parts of Mucuna contain valuable medicinal properties [2,3] and there is heavy demand of Mucuna in Indian drug market. In Ayurvedic system, the kaunch seeds and roots are used for the treatment of diseases of central nervous system and also as an anthelmintic [4,5]. Its different preparations from the seeds are also used for the management of ageing, rheumatoid arthritis diabetes, male infertility and nervous disorders. M. pruriens seed powder contains high amount of L-DOPA (L-3,4 dihydroxy phenylalanine), which is a neurotransmitter precursor and effective remedy for the relief in Parkinson’s disease. In addition seeds contain tryptamine, 5-hydroxytryptamine (5-HT), mucunine, mucunadine, prurienine and prurieninine [6,7].

Though there are reports of several methods for the determination of L-DOPA in biological fluids and pharmaceutical preparations, such as by spectrophotometer [8], HPLC [9,10] etc. Nevertheless, HPLC and other mentioned techniques have often suffered from diverse disadvantages of high cost of analysis, selectivity, with complex sample preparation procedures, and long analysis time. In the recent past high performance thin layer chromatography (HPTLC) has emerged as an important tool for the qualitative and quantitative phytochemical analysis of herbal drugs for quality control. It is carried out within a short period of time, requires small quantity of solvents, and allows for the analysis of a large number of samples simultaneously. The ability of HPTLC to analyze many samples in parallel has the advantage over other techniques because separation of 10 to 20 samples takes the same time as the separation of one sample. It can detect as low as upto nanograms compound. The recent reported HPTLC methods for determination of L-DOPA in drugs [11,12] suffer drawbacks such as long extraction time and lengthy procedures etc. Therefore, the aim of the present study was to develop and validate a simple, rapid, sensitive, precise and economical HPTLC method for the quantitative determination of L-DOPA in seed extracts of Mucuna pruriens.

Pure L-DOPA was obtained from Sigma-Aldrich, other solvents and chemicals were of analytical grade and HPTLC plates silica gel 60F254 (20 cm×20 cm) were purchased from E. Merck (Darmstadt, Germany). A stock solution of L-DOPA (1000 μg/ml) was prepared by dissolving an accurately weighed 10 mg of L-DOPA standard in 10 ml of 0.1N HCl in a volumetric flask. Standard working solution was prepared by diluting stock solution with 0.1N HCl with concentration of 0.1 μg/μl.

Fifteen accessions of Mucuna germplasm representing three species namely, M. pruriens (11-accs.), M. prurita (2-accs.) and M. utilis (2-accs.) were selected for the present studies. These were collections from different geographical regions of India and three exotic accessions were from Australia, USA and Italy. The details of NBPGR accession numbers, Mucuna species and place of collection are given in Table 1. The seed coat colour varied from white, cream, black, and brown among seeds of these collections.

Seeds of Mucuna pruriens were dried and powdered after removing seed coats. One gram of the powdered seeds was refluxed with 50 ml 0.1N HCl on boiling water bath for 30 min. The extract obtained was filtered using whatman filter paper and the residue was again refluxed with fresh 50 ml of 0.1N HCl for another 30 min. The extract was filtered and both the filtrates were pooled to make total volume of the extract 100 ml with 0.1N HCl for estimation of L-DOPA. An aliquot of sample 2 μl was applied on TLC plate.

A Camag HPTLC system equipped with Linomat V automatic TLC sample spotter, glass twin trough chamber (20×10 cm), Scanner 3 and integrated Wincats 4.03 Software was used for the analysis. Experimental conditions were optimized. The samples were spotted in the form of 8 mm bands on HPTLC plates (20×10 cm) using Linomat V under a flow of N2 gas, 10 mm from the bottom. The linear ascending development was carried out in a twin trough chamber which was presaturated with 12 ml mobile phase of n-butanol:acetic acid glacial:water (4:1:1, v/v) for 30 min. The plates were developed upto 8 cm and then air dried. Quantitative evaluation of the plate was performed in absorption-reflection mode at 280 nm, using a Camag TLC scanner 3 integrated with WINCATS software at a slit width of 6×0.45 mm and data resolution 100 μm step and scanning speed 20 mm s−1.

Stock solution of L-DOPA (0.1 μg/μl) was used in the different concentrations for preparing calibration graph of peak area versus concentration. In order to determine the detection limit (LOD) and the quantification limit (LOQ), analyte concentrations corresponding to the lower part of the linear range of the calibration curve were used. LOD and LOQ were calculated by using equations [13,14]: LOD=3.3 s/b; LOQ=10s/b, where “s” the SD of the response and “b” corresponds to the slope obtained from the linearity study of the method. The method was validated according to ICH guidelines for precision, accuracy and repeatability [13,14].

A linear calibration equation Y=404.073+2.762*X was obtained for L-DOPA in the concentration range of 100-1000 ng/spot with the correlation coefficient of 0.9980. Results of regression analysis on calibration curve and detection limits are presented in Table 2. Repeatability of the method was tested by analyzing the standard solution (400 ng/spot) for six times. Selectivity of the method was confirmed by overlay spectra of standard L-DOPA and Mucuna pruriens extract. The method was found to be specific as it well resolved L-DOPA in the presence of other compound. The spot of L-DOPA was confirmed by comparing the Rf and spectra of the spot with that of the standard.

L-DOPA is expressed as mean of duplicate analysis

Table 1: Mucuna germplasm with geographical areas of collection and l-dopa content (%) in seeds

Regression equation Y=a0+a1x, where a0 is intercept and a1 is slope

The accuracy of the method was ascertained by carrying out recovery studies by standard addition method. A known but varying amount of standards from L-DOPA was added to the preanalyzed sample and analyzed according to the proposed method. The recoveries were found between 93.72% and 104.98% and mean recovery was 100.89% (Table 3). Instrumental precision was checked by repeated scanning of the same spots (300, 400 and 600 ng/ spot) of standard L-DOPA six times and the % RSD values were 1.121, 1.239 and 2.625 respectively. Similarly, the inter-day precision was tested on the same concentration levels on two days and the RSD values were 1.766, 2.370 and 3.370, respectively (Table 4). 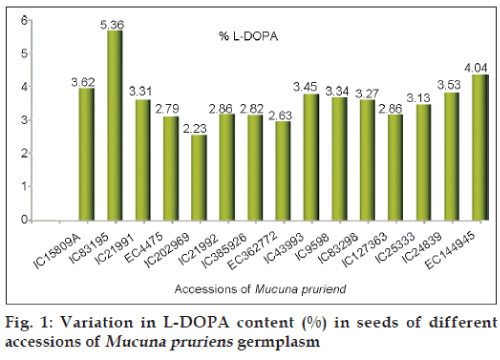 The HPTLC method developed here for the quantification of L-DOPA in Mucuna pruriens seeds is simple, rapid, cost-effective and easily adaptable for screening and quantitative determination of L-DOPA in Mucuna germplasm. This method allows a large number of samples to be measured simultaneously with a very good accuracy, sensitivity, and precision. It is very important especially in quality control. This method can also be used for the quantitative determination of L-DOPA in herbal extract and its formulations. Promising Mucuna germplasm accession can be exploited for their pharmacological properties especially L-DOPA content.