Surgical site infection (SSI)[1] refers to incision-related infections that occur within 30 d after implant-free surgery or within 1 y after implant-free surgery (such as pedicle screw, intervertebral fusion cage, artificial intervertebral disc)[2]. It often has a huge impact on the physical and mental health of patients. Postoperative wound infection not only endangers the health of patients, but also brings many social and economic problems, resulting in a significant increase in the average cost of treatment. It has been reported that the cost of treatment for patients with spinal infection is more than 4 times that of patients without infection[3,4]. Increased costs include secondary or multiple surgical costs, antibiotic treatment costs, ancillary examination costs and nutritional support costs, and early diagnosis of incision infection after surgery is quite difficult. The determination of inflammation-related blood indicators is the main method for early diagnosis of incision infection after operation[5]. At present, commonly used inflammation-related blood indicators include white blood cell count (WBC) and classification, erythrocyte sedimentation rate, C-reactive protein (CRP), procalcitonin, serum amyloid substance[6,7].

In recent years, with advances in medical technology, a new bio-social-psycho-medical model has been formed. Of course, the purpose of developing this kind of model is not only to make the surgery successful, eliminate the disease and restore health, but also to minimize the trauma of patients, so that they can recover quickly. However, with the change of people’s health concept and the enhancement of service consciousness, patients not only need a cure, but also high-quality services and rapid rehabilitation[8]. In this context, rehabilitation therapy intervention comes into main focus. At the beginning of this century, it was put forward that the meaning of rehabilitation therapy intervention refers to the cooperation of surgeons, anesthesiologists, nurses and other skilled personnel. In the process of surgery, scientific and effective methods are adopted to reduce patients’ stress response level and prevent the operation from causing too much trauma to patients, so that the patients can recover quickly under the high-quality nursing service and the treatment outcome of diseases can be improved[9,10].

Fifty four patients with inflammatory surgical incision infection and CRP markers in the Affiliated Hospital Gansu University of Chinese Medicine from June 2016 to June 2018 were selected comprising of 40 females and 14 males, aged 32-70 y with an average age of 49.7±13.6 y.

The inclusion criteria were, age range of 18 to 70 y. those who met the indications of operation and without any contraindications to the surgery. Patients with good cardiopulmonary function, without hypertension, diabetes or other complications and those with no local infection and other phenomena. The most important thing was that patients voluntarily participate and sign the informed consent. Exclusion criterion included, Age below 18 or over 70, pregnant or lactating women, patients with serious pathological changes in heart, brain, kidney and other important organs, or with recent onset of psychiatric disorders or language disorders and patients with previous neck surgery or radiation history.

The collected cases are numbered according to the length of hospitalization and then randomly divided into odd control group (24 cases) and even experimental group (30 cases). All patients underwent ultrasound examination, physical function examination, rapid frozen section examination during operation and pathological diagnosis after operation. Two groups of patients were subjected to the same operation, anesthesia and nursing team. The control group that developed surgical incision infection and inflammation were treated with traditional perioperative nursing measures, while the experimental group were provided rapid rehabilitation intervention measures. This study is a clinical randomized controlled trial approved by the ethics committee of the hospital. Through randomized grouping, the outcome of rehabilitation therapy intervention in patients with surgical incision infection and inflammation is addressed. The research protocol were shown in fig. 1. 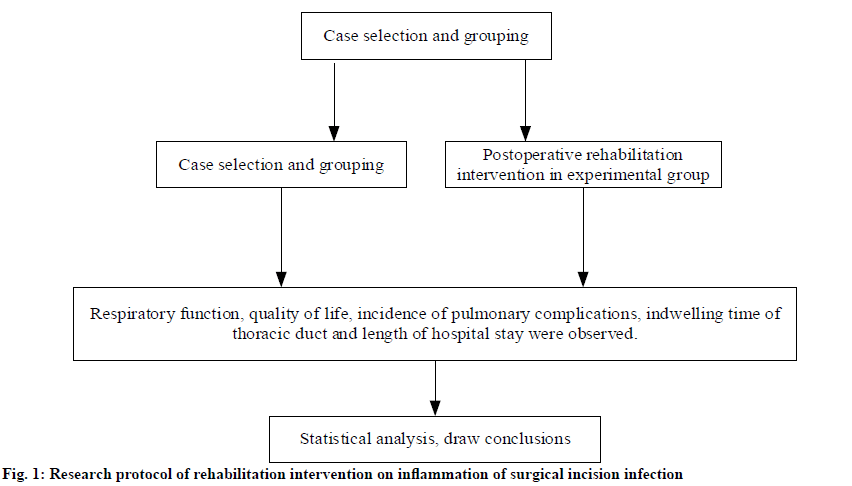 All the patients were given general anesthesia. Intravenous drip of a second generation cephalosporin (cefixime) was given 30 min before operation. For patients undergoing spinal canal decompression, methylprednisolone 120 mg was given to prevent neuroedema during operation. One wound drainage tube is placed routinely in all patients. All patients with internal fixation were treated with 2 g QD of cefixime sodium, which is discontinued 72 h later. For patients with spinal canal decompression, the dosage of dexamethasone 5 mg BID is reduced to 5 mg QD for 3 d after operation and discontinued on the day 6 after operation. When the drainage volume is less than 50 ml within 24 h, the drainage tube should be removed.

Rehabilitation intervention was initiated when infection occurred in the incision after operation and the patient is fully awake. Firstly, body position guidance was carried out from the first day after operation. Lateral decubitus position, in which the affected side allowed to lie on the upper side while the waist cushioned on a soft pillow. Both hips and knees flex. Relaxing the abdominal muscles could facilitate abdominal breathing. Pneumonectomy patients were made to avoid excessive lateral decubitus position, but positioned at 1/4 lateral decubitus position. Semi-prone position was that the upper half-prone position of the affected side is taken with a soft pillow padding under the chest, the lower leg is stretched, and the upper leg is flexed. Semi supine position was that in which the upper half supine position of the affected side is taken, and the pillow is cushioned on the back. Upper limb naturally falls back and lower limb flexion is placed beside the body. The lower limbs were in the same position as the lateral position. The above positions are carried out in turn. Each position lasted for 20 min to 1 h each time, twice a day.

Third, lower limb exercises and out-of-bed training, in which after awakening, the patient was asked to move the lower limb joints in bed, flex the leg to stretch the leg and lift the leg. On the day after operation, the lower limbs are stretched forward alternately to prepare for walking. One group of 10 times is used to breathe in through the nose while stretching, while the lips are contracted and exhaled when lowering. After standing, patients were asked to walk step by step with the number of steps and time and walking distance increased daily. If a patient felt mild dyspnea he was asked to stop.

CRP increases in the first few hours of inflammation and peaked at 48 h. CRP decreases to normal level as the lesion subsided and tissue structure and function recovered. The response was not affected by radiotherapy, chemotherapy and corticosteroid therapy. Therefore, the detection of CRP has a wide range of clinical applications, including the diagnosis and differential diagnosis of acute infectious diseases, postoperative infection monitoring, observation of antibiotic efficacy, course detection and prognosis judgment. The degree of CRP elevation reflects the size or activity of inflammatory tissue. CRP has a good correlation with disease activity in acute inflammation and infection. This is not consistent with chronic inflammation. Although in some important cases, such as rheumatoid arthritis, segmental ileitis and rheumatic polymyalgia, this correlation is sufficient for therapeutic monitoring. CRP values of 10-50 mg/l indicate mild inflammation, such as local bacterial infections (cystitis, bronchitis, abscess), surgical and accidental trauma, myocardial infarction, deep venous thrombosis, inactive connective tissue disease, many malignant tumors and most viral sensations. The increase of CRP value to about 100 mg/l indicates more serious diseases, and the degree of inflammation needs intravenous injection when necessary. CRP value is more than 100 mg/l, which indicates the process of serious diseases and often indicates the presence of bacterial infection. 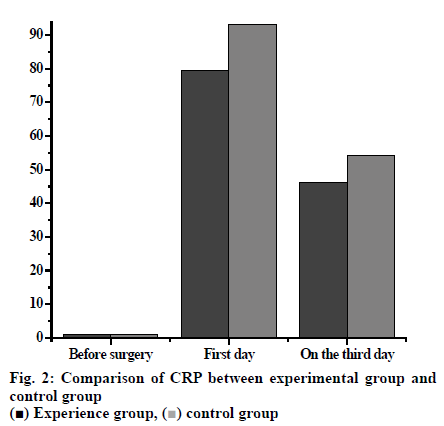 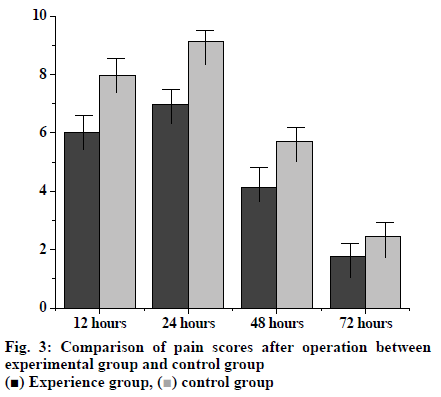 Increased incision contamination, increased incision length, unreasonable use of antibiotics, including invasive operations, are risk factors for nosocomial infections in patients after surgery, and the risk will continue to increase with the prolongation of the duration of invasive operations. Therefore, it can be seen that wound infection is the result of a combination of multiple causes, including the patient’s own causes, medical personnel, articles and instruments, environmental health and other factors, so wound infection needs to be prevented in all aspects and links. Rehabilitation therapy intervention concept is a new concept based on medical needs. It combines the shortcomings of traditional medical care methods, and constantly carries out research around the real interests of patients, which greatly shortens the recovery time of patients after operation, thus effectively alleviating the pain and economic pressure of patients during hospitalization. Rehabilitation therapy intervention reduces the trauma and stress of patients during perioperative period, alleviates the pain of patients, increases the comfort of patients, and promotes early rehabilitation of patients. Compared with the traditional scheme, it also saves the hospitalization expenses, shortens the hospitalization time, and has good economic value.