The aim of the present study was to prepare, evaluate and optimize, self micro emulsifying drug delivery system of celecoxib. A 3 factor, 3 level factorial design was used for the optimization procedure with different amounts of Labrafil 2609 WL, Labrasol, and Cremophor EL as the independent variables. The response variable was selected on particle size (nm) of the droplets after dilution in 0.1N HCl. Particle size of the self micro-emulsifying drug delivery system depends on the quantity of above three independent variables. Three different levels of each independent variable were selected for the optimization. Mathematical equation and response surface plots were used to relate the dependent and independent variables. The regression equation generated for the particle size after dilution was, Particle size (Y)= +27.83+76.07×A-23.62×B-43.83×C+52.72×A2+9.82×B2+27.20×C2-14.52×A×B-32.38×A×C+12.1×B×C, where, A=Labrafil 2609 WL, B= Labrasol, C= Cremophor EL, Y= particle size. The optimized model predicted a particle size of 28.33 nm with 0.16ml of labrafil 2609 WL, 0.17ml Labrasol and 0.22 ml of Cremophor EL.The observed response were in close agreement with the predicted values of the optimized formulation. This demonstrates the reliability of the optimization procedure in predicting particle size of self microemulsifying delivery system for celecoxib.

Approximately 35-40% of new drug candidates have poor water solubility. The oral delivery of such drugs is frequently associated with low bioavailability, high inter-subject and intra-subject variability and lack of dose proportionality. Efforts are needed to enhance the oral bioavailability of class-2 and class-4 lipophillic drugs in order to increase the clinical effi cacy. Currently various formulation strategies are in practice such as use of cyclodextrin, nanoparticles, solid dispersion, micronization, liposomes, permeation enhancers, lipid solutions and microemulsions [1,2].

Microemulsion has got advantages like excellent thermodynamic stability, high drug solubilization capacity, improved oral bioavailability and protection against enzymatic hydrolysis. The only problem with microemulsion is poor palatability due to the lipid content leading to the poor patient compliance. Moreover due to their water content, microemulsion cannot be encapsulated in soft gelatin and hard gelatin capsules; hence there is a need for anhydrous selfmicro emulsifying drug delivery system [3].

Compared to microemulsion, Self-microemolsilying Drug delivery System (SMEDDS) offers advantages such as, improved physical stability profile upon long term storage, volume considerations and can be presented in concentrated form and can be filled directly into soft or hard gelatin capsules for convenient oral delivery. The most signifi cant one is that microemulsion dosage form uses a large amount of surfactants for the purpose of forming microemulsions. This has posed clinical liabilities as surfactants often have potential toxic effects when used at high levels. The use of cosolvent/cosurfactants is believed to act as a good solubilizer for both water and oil and reduce surface tension by stabilizing fi lm formation between the two phases at suffi ciently low concentration. This rules out the use of the large amount of surfactants in the formation of microemulsion.

Self-micro emulsifying system is isotropic mixture of oil, surfactant and hydrophilic co-surfactant which forms fi ne o/w emulsion, when introduced in excess of aqueous phase under conditions of gentle agitation [3]. Agitation will be provided by body movement and gastrointestinal movement in vivo. Bases for selfmicro emulsifying system have been formulated using medium chain tri-glyceride oils and non-ionic surfactant, which are acceptable for oral ingestion4.

A literature search reveals an exhaustive number of publications characterizing the self emulsified drug delivery system [5-12]. Reported studies use different methods for In vitro evaluation such as self emulsifi cation time, cumulative percent release, low frequency dielectric spectroscopy, zeta potential measurement and surface tensiometry. Particle size of SMEDDS after dilution was selected as criteria for In vitro evaluation. Smaller the particle size of SMEDDS more is the release of drug with better bioavailability. Particle size of around 20 nm gives total transparent system upon dilution, which acts as a solution. So, particle size was selected as criteria for the optimization. Screening and optimizing self-emulsified drug delivery system could be further simplified by the use of statistical design that requires only a small number of experiments, thereby eliminating the need for time-consuming and detailed ternary phase diagrams. The statistical optimization design has been documented for the formulation of pharmaceutical solid dosage forms [13-15]. Wehrle et al.[16] have reported the use of a sequential statistical design for optimizing the droplet size of a miconazole emulsion. Here SMEDDS were tried to optimize on the basis of particle size after dilution in 0.1N HCl, which are profoundly infl uenced by several formulation variables.

Celecoxib is a nonsteroidal antiinflammatory drug which selectively inhibits the enzyme, cyclooxygenase- 2 (COX-2). Celecoxib occurs as an odorless, white to off-white crystalline powder. The aqueous solubility of celecoxib at a pH less than 9 is about 5 μg/ml at 5–40°. Doses given for celecoxib in different indications range from 50-400 mg OD/BD. It is diffi cult for a drug to get dissolved in a limited volume of the acidic content in the stomach; hence celecoxib shows dissolution limited bioavailability [17-19]. It is a class-2 drug with poor solubility and high permeability through out the GIT. The bioavailability of celecoxib was found to be 22-40% when given in a capsule form. So celecoxib was taken as a model drug for the improvement of bioavailability [20].

The objective of the present work was to apply response surface methodology for the optimization of celecoxib self-micro emulsifying drug delivery system. As a part of optimization process, the main effects, interaction effects and the quadratic effects of the formulation ingredients were investigated. Excipients and their interaction were evaluated for their effect on the particle size of celecoxib SMEDDS after dilution. Particle size is particularly important since release rates are greatly infl uenced by particle size. Particle size is affected by formulation ingredients.

Optimization of the celecoxib SMEDDS were done using 3 level factorial design. From the preliminary study Labrafil WL 2609 was selected as lipophile, Labrasol as a surfactant and Cremophor EL as a cosurfactant. Quantities of Labrafi l 2609, Labrasol and Cremophor EL were selected as the three factors for optimization. Three levels for each factor were used to construct experimental design. Levels for Labrafi l WL 2609 (0.1, 0.2, 0.3), Labrasol (0.1, 0.2, 0.3) and Cremophor EL (0.15, 0.25, 0.35) were selected from preliminary study. Particle size was selected as a desire to response for optimization. 32 experiments were planned as per 3 [3] factorial designs.

Preparation of the celecoxib self micro emulsifying formulation

Accurately weighed 50 mg of celecoxib was mixed with 50 μl of transcutol in a borosil glass test tube. Labrafi l 2609 WL, labrasol and cremophor EL were added with the help of a positive displacement pipette and mixed on a cyclomixer to get a uniform mixture. Prepared formulations were filled in a transparent gelatin capsule (Size “0”). Capsule was sealed with the help of gelatin band to avoid leakage. Each capsule represented 50 mg of Celecoxib with 50 μl of transcutol in addition to the specifi ed amount of labrafil 2609 WL, labrasol and cremophor EL as given in Table 1.

Particle size of the self-microemulsifi ed formulation filled in the capsule was determined using Coulter N4 Plus at 20º. The capsule was placed in 200 ml of 0.1N HCl. It was allowed to disintegrate for 5 min. Particle size was measured using the following parameters. Profile: Unimodel <2% CV<1000 nm, angle selected: 90.0, run time: 425 s, equilibrations time: 2 min, repetition: repeat 1 time for each angle.

Microemulsion region was found out by constructing pseudoternary phase diagrams. Approximate quantities of lipophiles (30%) and surfactant system (above 50%) were decided. Further optimization of the formulation was done by Design Expert software. 32 experiments were planned as per 3[3] factorial designs. Particle size of SMEDDS was selected as a response for optimization. The experimental runs and the observed response for the 32 formulations are given in Table 2. Based on the experimental design, the factor combination resulted in different particle size. The range of response was 334.3 nm in standard run 3 (maximum) and 13.5 nm in standard run 22 (minimum). The mathematics in the form of a polynomial equation for the measured response was obtained with statistical package Design expert® version 6 software for the experiment design is listed in Table 3. The polynomial equation relating the response Y and variables A,B,C as: Y=+27.83+76.07×A-23.62×B-43.83×C+52.72×A2+9.8 2×B2+27.20×C2-14.52×A×B-32.38×A×C+ 12.1×B×C, where, Y= particle size, A= quantity in ml for Labrafi l 2609 WL, B= quantity in ml for Labrasol and C= quantity in ml for cremophor EL. 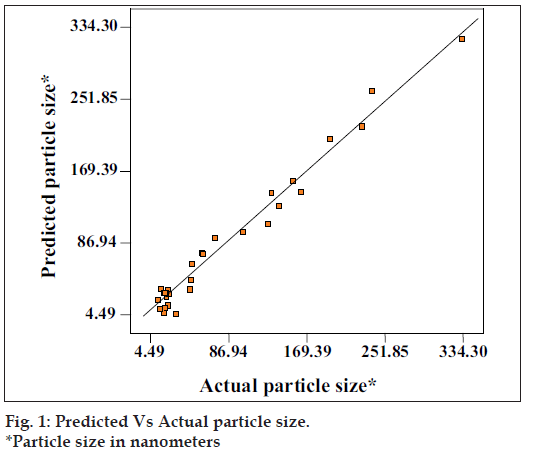 The signifi cance of the ratio of mean square variation due to regression and residual error was tested using analysis of variance (ANOVA). The ANOVA indicated a signifi cant (P<0.05) effect of factors on response. 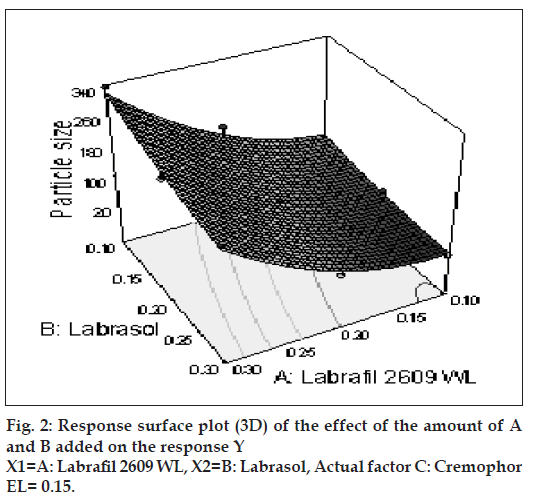 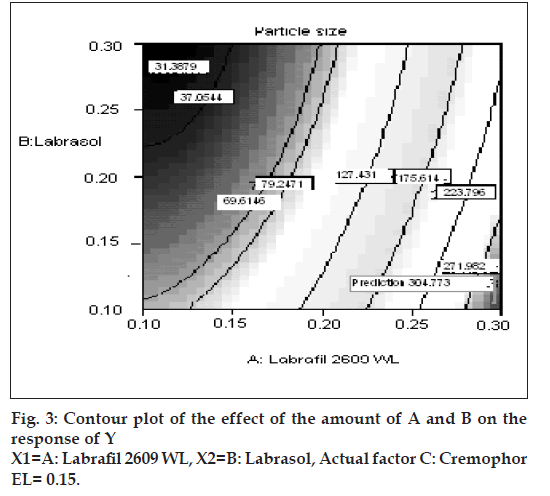 The possible explanation for this is that at higher concentration of lipophile and with a low amount of added labrasol the proportion of surfactant that facilitate water penetration decreases, and the mixture becomes more lipophilic causing increase difficulty in emulsifi cation, hence increase in the particle size [21]. This was shown in the fi gs. 4 and 5. When effect of B, C and their interaction on Y at a fixed level of A was observed, it was found that, at low level of B (amount of labrasol), Y decreases from 74.4 nm to 26.99 nm, as amount of cremophor EL increases from 0.15 to 0.35 ml. At higher level of B, Y remains approximately constant (32 nm) at level of 0.15 and 0.35 ml of C but decrease to 4.93 nm at 0.25 ml. The possible explanation for this is that cremophor EL (surfactant) strongly localized at the surface of the emulsion droplet reduces interface free energy and provide a mechanical barrier to coalescence resulting in a thermodynamically spontaneous dispersion [22]. However, at high cremophor EL concentration because of its high viscosity, progress of effi cient emulsifi cation may be compromised due to viscous liquid crystalline gel forming at the surfactant-water interface. 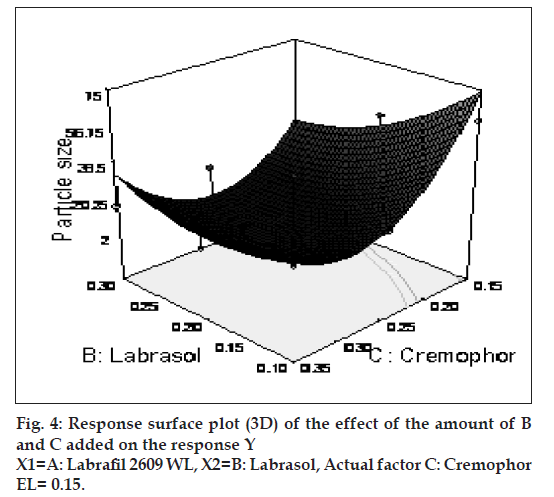 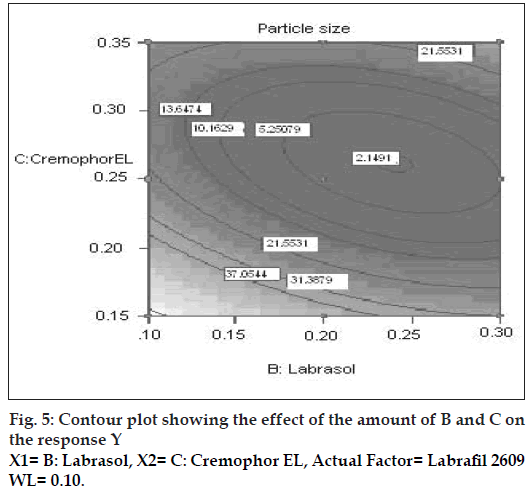 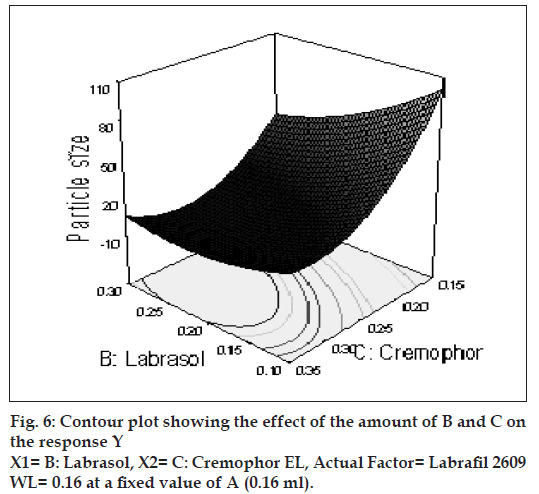 After generating the polynomial equation relating the dependent and independent variables, the process was optimized for the response Y. Optimization was performed to obtain the levels of A, B and C, which minimize Y. Quantity of A, B and C was selected, which was suitable to be fi lled in a “0” size hard gelatin capsule. Quantity of A should not be less then 0.160 ml otherwise drug may precipitate out from the formulation. Figs. 6 and 7 show response surface diagram (3D). Particle size of the optimized formulation below 30 nm was taken as a constraint for Y. To verify these values, a new formulation was prepared according to the predicted levels of A, B and C. Obtained Y was in close agreement with the predicted value. The predicted and observed values are shown in Table 3. This demonstrates reliability of the optimization procedure in predicting the particle size of SMEDDS. 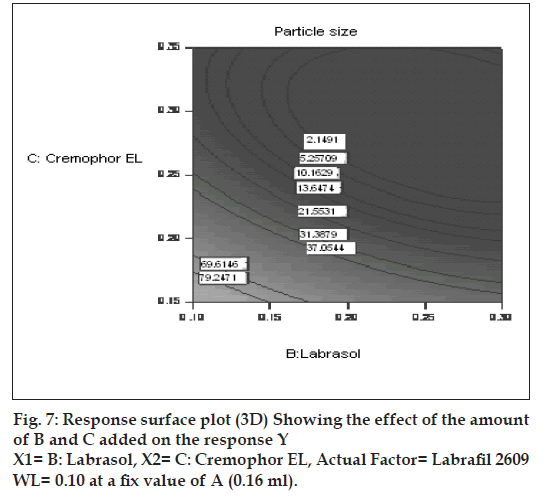 Optimization of the self microemulsifying formulation of celecoxib was performed using 3 factor, 3 level design. The amount of added A (labrafi l 2609 WL), B (labrasol) and C (cremophor EL) showed signifi cant effect on the particle size and physical appearance of the resultant microemulsion on dilution in 0.1N HCl. The quantitative effect of these factors at different levels was predicted using polynomial equation. Response methodology was then used to predict the levels of the factor A, B and C required to obtain an optimum formulation with particle size bellow 30 nm. A new formulation was prepared according to these levels. Observed response was in close agreement with the predicted values of the optimized formulation, thereby demonstrating the feasibility of the optimization procedure in developing self micro emulsifying delivery of celecoxib.