A simple, reproducible and efficient reverse-phase high performance liquid chromatographic (HPLC) method was developed for simultaneous determination of tizanidine and valdecoxib from their pharmaceutical dosage forms. Separation was done by using mobile phase of composition ammonium acetate buffer (0.1 M): methanol: acetonitrile in the ratio of 50:30:20 v/v. Quantitation was achieved with UV detection at 232 nm based on peak area, with linear calibration curves at concentration ranges from 1-100 µg/ml for tizanidine and valdecoxib respectively. The method has successfully been applied to pharmaceutical dosage forms. No chromatographic interference from the tablet excipients was found. The method was validated using ICH guidelines and was found to be highly precise, accurate and robust.

Tizanidine hydrochloride, 5-chloro-N(4,5-dihydro-1H-imidazol-2-yl)2,1,3-benzothiadiazol-4-amine, is used as a centrally acting muscle relaxant; in addition, it also has gastroprotective properties. Hence it is used with other NSAIDs for the treatment of local pain [1,2]. Valdecoxib is a cyclooxygenase-2 (COX-2) selective NSAID, with 28 000 times greater selectivity for COX-2 than COX-17. It is chemically 4-(5-methyl-3-phenylisoxazol-4-yl) benzene sulfonamide [3-6]. It is mainly used for osteoarthritis, rheumatoid arthritis and dysmenorrhoea8-10. Literature survey reveals that HPLC methods for simultaneous determination of tizanidine and other NSAIDS [11-14] have been reported, but not for determination of tizanidine and valdecoxib in combination. The aim of this study was to develop a simple, precise and accurate reversed-phase (RP) HPLC method to estimate tizanidine and valdecoxib in tablet. Criteria employed for assessing the suitability of said solvent system were cost-effectiveness, time required for analysis, solvent noise and preparatory steps involved in the extraction of the drug from the formulation excipients matrix for the estimation of drug contents. The retention times for tizanidine and valdecoxib were 3.2 and 4.5 min., respectively. The typical chromatograms of the drugs are shown in fig. 1. The peak shapes of both drugs were symmetrical and asymmetry factor was less than 2. 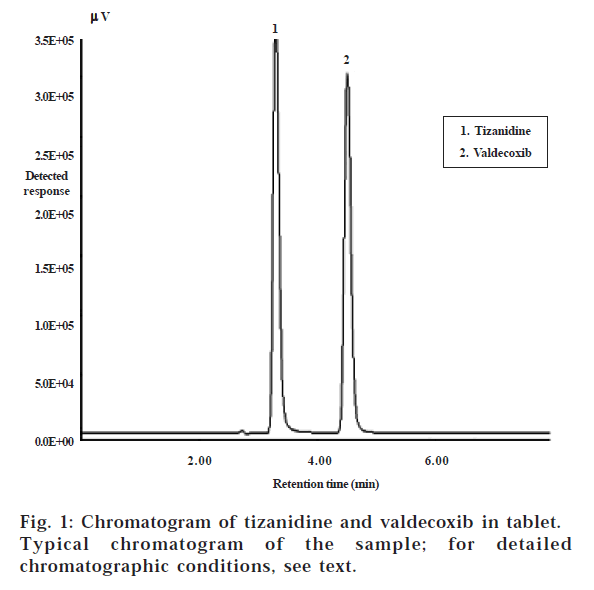 Pharmaceutical grade tizanidine and valdecoxib were kindly supplied as gift samples by Cadila Health Care Ltd. and Unichem Laboratories Ltd., respectively and were used without further purification. All chemicals and reagents were of HPLC grade and were purchased from S.D. Fine Chemicals Ltd, Mumbai.

HPLC system consisted of a pump (model Jasco PU 2080 plus). Manual injector was used. Loop used was of 20-μl capacity per injection. UV detector (model Jasco 2075 plus) was used. Detection was carried out at 232 nm and the software used was Jasco Borwin. Hypersil C-18 [250 × 4.6 mm, 5 μm] column was used. Different mobile phases were tested in order to find the best conditions for separating both the drugs simultaneously. The optimal composition of mobile phase was determined to be 0.1 M ammonium acetate buffer (pH 6): methanol: acetonitrile (50:30:20 v/v). Flow rate was set to 1 ml/min.

The plot of peak area of standard solutions versus concentration was found to be linear in the range of 1100 μg/ml for both tizanidine and valdecoxib and coefficient of correlation (r2) was 0.9996 and 0.9991 respectively.

Amounts of drug powder equivalent to 100% of label claim respectively of tizanidine and valdecoxib were accurately weighed and assayed. The system repeatability was determined by six repeated applications. Repeatability of sample application and measurement of peak area were expressed in terms of relative standard deviation. Method repeatability was obtained from relative standard deviation by repeating six times during the same day for intraday precision. Intermediate precision was also done.

To study accuracy, reproducibility and precision of the proposed method, recovery experiments were carried out. The average percentage recovery of tizanidine and valdecoxib was 99.8 and 100.1 respectively. The sample recovery in the marketed formulation was in good agreement with what was claimed on the label. System suitability parameters are given in Table 1. Assay in the tablet dosage form was found to be 99.8% of valdecoxib and 99.9% of tizanidine. The method was simple and the run time given was 10 min. The proposed method gives a good resolution between tizanidine and valdecoxib within a short analysis time (<10 min) and can be conveniently adopted for routine quality control analysis.

The authors are thankful to Unichem Laboratories Ltd. and Cadila Health Care Ltd. for providing gift sample of drugs.