MicroRNAs (miRNA) are a large family of small noncoding single-stranded RNA with a length of about 22 amino acids. At present, there are about 38,000 kinds of miRNA discovered, among which there are about 2,800 kinds in human body[9]. MiRNAs widely exist in many eukaryotic organisms. MiRNAs play a wide range of regulatory roles in biological processes such as cell proliferation, differentiation, apoptosis, and have a very important impact on the growth and development of organisms. The biosynthesis of miRNAs in cells mainly involves 5 steps, transcription to form pri-miRNAs, processing of pri-miRNAs to form pre-miRNAs in the nucleus, pre-miRNA transport to the nucleus, truncation of pre-miRNAs in cytoplasm and formation of mature miRNAs[10]. MiR-128 is divided into 2 types, 1/2 (also called a/b), which are located on the 2q21.3 and 3p22.3 chromosomes of humans, respectively. Studies have shown that miR-128 is closely related to the formation of gliomas. When gliomas occur, their expression often shows abnormalities. MiR-128 may act by binding to its target gene and inhibiting the proliferation of glioma cells[11].

Sprague-Dawley (SD) rats used in the experiments were purchased through regular channels. Rats were adaptively fed in the animal room for 2 w after purchase. Rats were housed in cages, no more than 5 per cage and were given free access to standard rodent diet and water. The temperature was controlled at 21±2°. The illumination time was controlled at 8-12 h per day and the relative humidity was maintained at 50 to 55%. Rats were weighed regularly and when the body weight reached 260 g, the rats were rescreened to exclude rats with over or under body weight. Six days before the formal experiment, all rats were trained on a treadmill for 5 min at a speed of 10 m/min on a slope of 0°. After the training, the rats that could not complete the training were excluded. Finally, 72 rats were retained which were randomly divided into 9 groups of 8 rats each. According to the chosen time points after exercise, these were grouped as 0, 6, 12, 24, 48, and 72 h, and 1 w and 2 w after exercise, along with a control group (C).

The exercise program specifically referred to Armstrong’s downhill running training model. Except for the quiet control group rats, all the other 8 group rats were simultaneously subjected to a continuous acute treadmill training. The running platform slope was -16º, the speed was 16 m/min, and the time was 90 min. The purpose is to familiarize the rats with the environment of the animal running platform[12].

Rats were anesthetized with 12 % chloral hydrate (420 mg/kg) given intraperitoneally. The rats were fixed in the supine position on the operating table and the abdominal cavity was opened to expose the inferior vena cava. About 5 ml of blood was collected into a blood collection tube without any additives. After 30 min, the blood was centrifuged for 18 min in a low temperature centrifuge at a speed of 3200 rpm. The serum separated was transferred to a centrifuge tube, and stored in an ultra-low temperature freezer. After collecting the blood, a scalpel was used to expose the rectus femoris muscle, which was carefully removed and placed in pre-cooled saline. The blood on the surface of the muscle was washed away, the fascia and fat were removed with a scalpel. Filter paper was used to absorb the moisture on the surface of muscle and the muscle was dipped in liquid nitrogen cooled isopentane, stirred slowly for about 8 s. Fully frozen muscle was quickly transferred from isopentane to dry ice. After about 20 min, the isopentane on the muscle surface was evaporated. The muscle was packed in tin foil, labelled and stored in a deep freezer at -80±2° for later use.

Hematoxylin and eosin (H and E) staining of muscle tissue:

Muscle tissue was taken in a 2 ml centrifugal tube and 1 ml TRIzol reagent was added immediately. Two 5 mm steel beads were added, Qiagen tissue homogenizer was used to fully homogenize the tissue. The homogenate was kept at room temperature for 3 to 5 min, 200 μl chloroform was added to the initial amount of 1 ml TRIzol, centrifuged for 15 min at 4°, 12 000 rpm. The upper water phase was carefully aspirated and added to another centrifugal tube. The initial amount of 500 μl isopropanol per ml TRIzol was added, placed at -20° for 30 min to complete precipitation. Centrifuged at 4°, 12 000 rpm for 10 min, the supernatant was carefully removed. To the pellet 1 ml of 75 % ethanol was added, centrifuged again at 4°, 12 000 rpm for 5 min, 75 % ethanol was used to wash the RNA pellet, supernatant was removed, pellet was dried partially, and when the RNA was slightly transparent appropriate volume of RNase-free water was added to completely dissolve. The yield of RNA was measured on an UV spectrophotometer at 260 nm, OD=40 μg/ml. The concentrated RNA was diluted in an appropriate ratio to a final concentration of 200 ng/μl.

A PCR tube was taken and a solution containing 2 μg of RNA was added and 1 μl oligo (dT)18 was added. It was made up to 12 μl with deionized water without ribonuclease. The mixture was incubated at 60° for 8 min on a PCR machine and rapidly cooled on ice. Buffer 4 μl, 2 μl 10 mM triphosphate deoxynucleotides (dNTPs), 1 μl RNA inhibitor and 1 μ1 reverse transcriptase were sequentially added and mixed, incubated at 40-42° for 60 min on a PCR instrument and the reverse transcriptase was inactivated at 80±2° for 6 min.

To the minced tissue, appropriate amount of a 20:1 mixture of cytoplasmic protein extraction reagents A and B was added. A homogenate was prepared by adding phenylmethylsulfonyl fluoride (PMSF) to a final concentration of 1 mM. The tissue and tissue homogenates are mixed in a ratio of 200 microliters of tissue homogenate per 60 mg of tissue and thoroughly homogenized in a glass homogenizer on an ice bath at 4°. The homogenate was transferred to a plastic centrifuge tube and placed in an ice bath for 15 min, centrifuged at 4°, 1500 g for 5 min. The supernatant was transferred to a pre-cooled plastic tube. The protein concentration was measured using the BCA method.

The tissue was placed in a cell pulverizer and 100 μl of protein extract was added. After lysing on ice for 10 min, the lysate was collected in a 1.5 mL microcentrifuge tube (EP) and centrifuged at 4°, 14 000 g for 15 min. The supernatant was stored at -70±2°. Bovine serum albumin (BSA, 1 mg/ml) was taken from -20° and thawed at room temperature. centrifuge tubes (1.5 ml, 54) were taken, with 6 in a group, were labeled as 0, 2.5, 5.0, 10.0, 20.0 and 40.0 μg. Various reagents were added to each tube, mixed and kept at room temperature for 2 min. Colorimetric analysis was performed on an enzyme-linked immunosorbent assay (ELISA) instrument. At the time of sample measurement, firstly, 1.5 mL centrifuge tubes were taken, 1 ml of Coomassie Brilliant Blue solution was added to each tube, the protein was measured for 30 min at room temperature. Then, a tube of Coomassie Brilliant Blue was taken, 100 μ1 of 0.15 mM NaCl solution was added, mixed and placed for 2 min as a blank sample. Finally, a tube of Coomassie Brilliant Blue was taken, 95 μl of 0.15 mM NaCl solution and 5 μl of the sample were added, mixed and placed for 2 min, and analyzed by colorimetry on an ELISA instrument.

The glass plate and the comb were washed, rinsed with double distilled water, dried and fixed on the glue maker. A certain concentration of separation glue is prepared and poured in to the two glass plates fixed in advance. Double distilled water was slowly added to flatten the surface of the gel, which is placed at room temperature for about 25-30 min. Separating gel (10 %) was configured with tetramethylethylene diamine (TEMED). The gel was shaken and poured immediately till the glue surface is raised to 2/3 of the whole glass plate height and then a layer of water was added to the glue. After 30 min at room temperature when the separating gel solidified sufficiently, the upper layer of water was removed and dried with filter paper. The concentrate (5%) is configured and TEMED is shaken immediately after it is added. The gel is shaken and poured immediately. After 30 minutes at room temperature the concentrated gel solidified sufficiently, the comb was pulled out vertically and steadily. The prepared gel was put into the electrophoresis tank, fresh electrophoresis buffer was added into the inner tank to ensure that at least the inside of the small glass plate is immersed. According to the protein concentration of the extract, a sample of 100 μg protein solution was used. Before sampling, the protein was denatured by placing the sample in boiling water for 3-5 min. The sample was taken in an EP tube, 2× loading buffer was added until the final concentration is 1×. Sampling began after sufficient electrophoretic buffer is added to the outer trough of the electrophoresis tank. Ten microliters adder was used to insert the sample into the hole and the sample was slowly added. Marker was added to the last side. At a constant voltage of 60V, the voltage is increased to 100V after separating the gel and the electrophoresis is terminated as soon as bromophenol blue run out of the gel.

All data are expressed in the form of mean±standard deviation (SD). SPSS22.0 and Excel statistical software are used to process the data. One-way ANOVA was used to test the difference between groups. The level of significance was set at P<0.05. 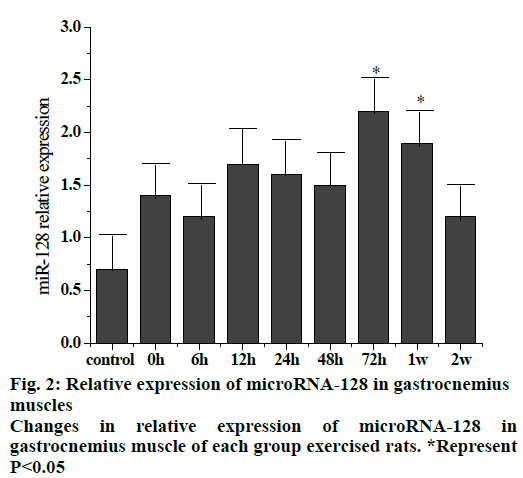 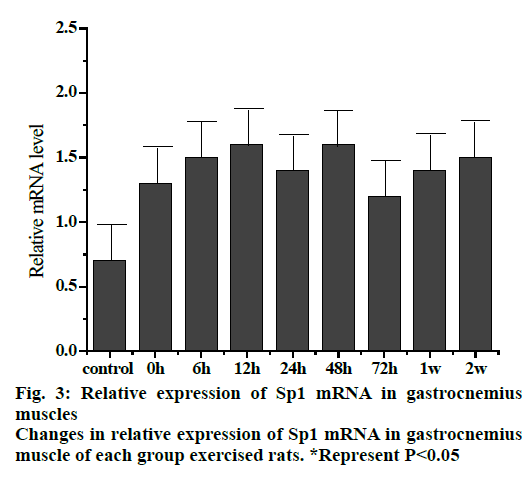 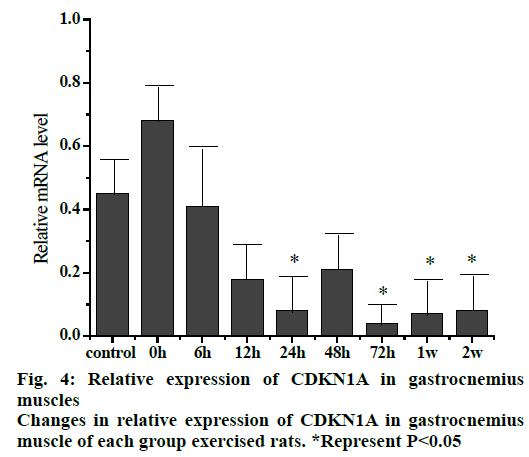 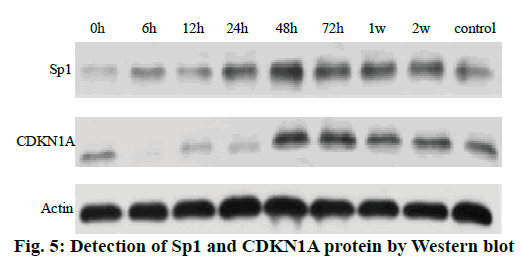 Figure 5: Detection of Sp1 and CDKN1A protein by Western blot 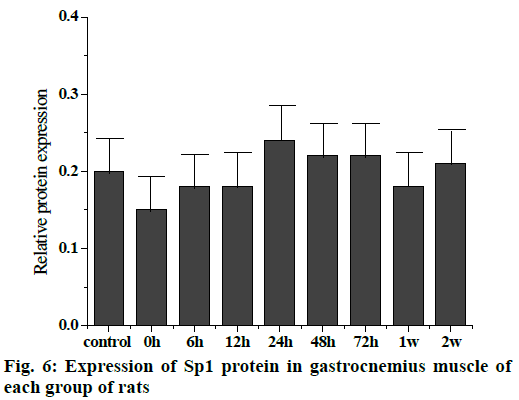 Figure 6: Expression of Sp1 protein in gastrocnemius muscle of each group of rats 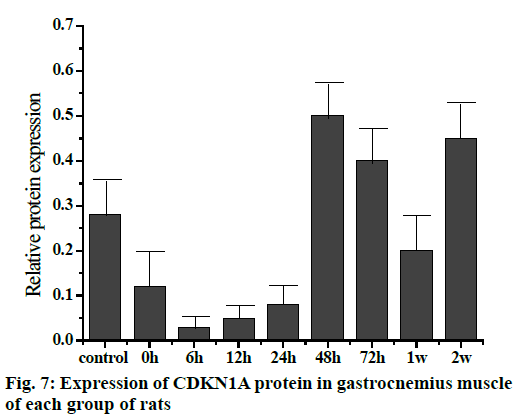 Figure 7: Expression of CDKN1A protein in gastrocnemius muscle of each group of rats

In this study, continuous downhill running training was used to cause skeletal muscle injury in rats. H and E staining showed that the muscle cells in gastrocnemius muscle showed slight swelling and inflammatory cell infiltration after exercise compared to the control group and the degree of injury was most serious at 3 d. The ultrastructure of muscle cells and the abnormalities of sarcomere rupture, disappearance and filament degradation were also found after exercise. Morphological evidence directly suggests that exercise (downhill running) does cause skeletal muscle damage in rats. However, compared to the degree of injury, the morphological results showed that the sports injury of skeletal muscle is far less serious than that caused by drug injection. In conclusion, H and E staining and morphological evidence from previous studies on ultrastructure intuitively confirmed that the established model of motor muscle microinjury and repair in rats is successful, but it is different from the model of muscle injury caused by drug injection. In fact, the microinjury model built in this study was closer to the changes of muscle injury caused by sports activities and this model is more representative in the field of sports science.

It is speculated that miR-128 might participate in the regeneration process of exercise-induced skeletal muscle injury and promote the repair of skeletal muscle injury by regulating the expression of CDKN1A. The specific regulation mechanism of Spl and CDKN1A could not be fully explained only by the changes in expression of miR-128, Spl and CDKN1A, but the actual phenomena on the surface could be seen. Moreover, the degree of muscle injury in this experimental model is slight, and the nerve injury is slighter. In combination with histological results, no myotubes with nuclei located in the center of the cell were found. Therefore, to further understand the specific mechanisms of miR-128, Spl and CDKN1A in this experimental model, more indepth research is needed.