Role of surfactant and pH in dissolution of curcumin

Curcumin is a potent phytoconstituent with wide range of biological activity [1]. Developing dissolution method for poorly soluble drugs has been a consistent challenge for the pharmaceutical scientists. The testing of pharmaceutical dosage forms for In vitro drug release and dissolution characteristics is very important for ensuring batch to batch quality control and to optimize formulations during drug development. Drugs, those are practically insoluble in water (less than 0.01%) need special attention during dissolution testing for proper In vitro-In vivo correlation. Since the dissolution may be a rate limiting step in the In vivo absorption process, there is a need for developing an appropriate dissolution medium [2].

Approaches usually used in the design of dissolution medium for poor water soluble drugs include increasing the volume of aqueous sink or removing the dissolved drug, solubilization of the drug by co-solvents (up to 40%) or by anionic or non-ionic surfactants (in post micellar concentration) or alteration of pH to enhance the solubility of insoluble drug molecules [3,4]. Among aforementioned approaches, pH modification and surfactant addition are the simplest and can be tailored to resemble GI fluid environment.

In the present investigation aqueous solubility of curcumin in medium containing co-solvents or surfactants was assessed to develop a dissolution system which satisfies sink condition for testing curcumin formulations. The selected dissolution media was used to study the dissolution process of curcumin tablets (300 mg).

The apparent solubility of curcumin in water or in presence of co-solvents or surfactant in water was determined at 370. Curcumin (50 mg) was added to 50 ml of water in an iodine flask and kept in temperature controlled magnetic stirrer maintained at 370 for 24 h. After shaking, the flasks were kept in incubator at 37±0.50 for equilibration for 12 h. Then the solution was filtered by whatman filter paper and the clear filtrate was assayed spectrophotometrically at 430 nm against blank solution. Form the available literature [5] the adsorption to Filter II (Whatman Filter) was much lower and in most cases negligible.

Dissolution experiments were performed using USP standard dissolution apparatus Type II (M/s Eletrolab, Mumbai) at 370 at a paddle speed of 100 rpm. The dissolution medium was 900 ml of either water or a mixer of water and SLS solution, selected on the basis of solubility data obtained from the experiments using 0.25, 0.5, 1.0, 1.5 and 2% of SLS in water. These mediums were also used to test the dissolution of bulk powder (100 mg, particle >200 μM) of curcumin. 10 ML Samples were withdrawn at periodical interval and analyzed spectrophotometrically at 430 nm. The same volume of dissolution medium maintained at 370 was added to maintain constant volume and sink condition.

In this study, solubility data was used as the basis for the development of a dissolution medium for curcumin. Since curcumin is poorly soluble in water, solubility determination was carried out using 0.25, 0.5, 1.0, 1.5 and 2% of SLS in water, phosphate buffer (pH 7.4 and 8) and acetate buffer (pH 4). The apparent solubility of curcumin in different media is given in the (Table 1). 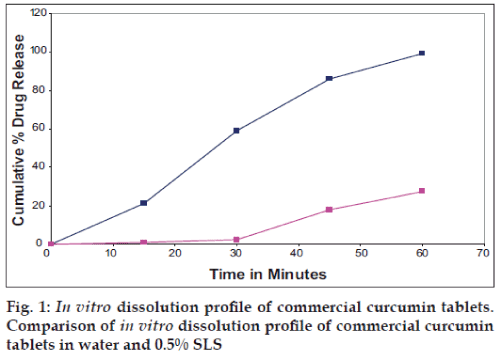 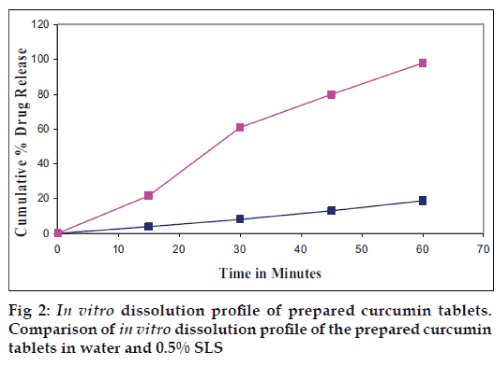 The authors thank Natural Remedies Pvt. Ltd, Bangalore for the pure sample of curcumin and the Institution for providing the facilities to carryout the project.