RP-HPLC analysis of aspirin and clopidogrel bisulphate in combination

The present investigation was aimed at developing a simple, precise and accurate HPLC method to estimate aspirin and clopidogrel bisulphate in capsules using widely used RP-HPLC C18 column (phenomenax). The mobile phase was optimized with acetonitrile, methanol and 20mM sodium phosphate buffer (pH 3), in the proportion 50:7:43 v/v. With the above mentioned composition of mobile phase, sharp peaks with good resolution between aspirin and clopidogrel bisulphate was achieved with reasonable short run time of 10 min. The criteria employed for assessing the suitability of above said solvent system were cost, time required for analysis, solvent noise, preparatory steps involved in the use of same solvent system for the extraction of the drugs from the formulation excipient matrix for the estimation of the drug content. UV detection was carried out at 240 nm as aspirin and clopidogrel bisulphate showed good absorbance at this wavelength. 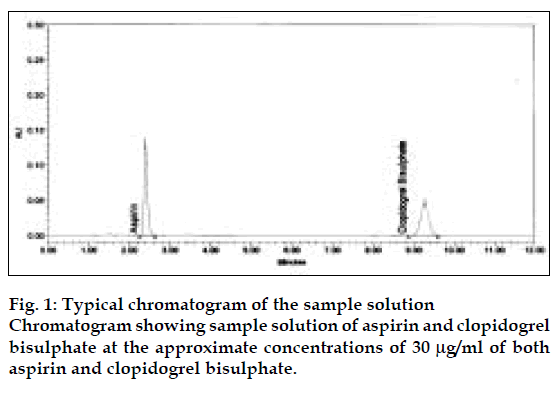