Nitazoxanide (NTZ), chemically, 2-acetyl- N-(5-nitro-2-thiazolyl)benzamide, is a synthetic nitrothizole derivative and it is new antiprotozal drug used in treatment of cryptosporidiosis in immunocompromised patients, including those with AIDS or HIV infection [1,2]. It is not official in any pharmacopoeia. Ofloxacin (OFX), a fluorinated carboxyquinolone, is a synthetic broad spectrum antimicrobial agent for oral administration. The chemical name of OFX is 9-fluoro-2,3-dihydro-3- methyl-10-(4-methyl-1-piperazynyl)-7-oxo-7H-pyrido- [1,2,3-de]-1,4-benzoxazine-6-carboxylic acid [3,4]. A survey of literature revealed that chromatographic and spectrophotometric methods are reported for determination of OFX and NTZ individually [5-8]. There are few references to the determination of NTZ and OFX in tablets by RP-HPLC and spectrophotometric method [9,10]. As the literature survey revels that no acid stabilized (presence of citric acid in mobile phase improves the stability of nitazoxanide) chromatographic method has been reported so far for the simultaneous determination of this OFX and NTZ in solid dosage form [11-13].

Twenty tablets of two pharmaceutical companies were accurately weighed, finely powdered and triturated well. The powder sample equivalent to 100 mg of OFX and 250 mg of NTZ was weighed and transferred to a 100 ml volumetric flask and about 80 ml of HPLC grade methanol was added. The content was sonicated for 15 min to dissolve. The volume was made up to the mark with HPLC grade methanol. This solution was filtered through 0.45 mm membrane filter and further diluted so as to obtain concentration 16 mg/ml of OFX and 40 mg/ml of NTZ and sonicated to degas. The prepared solution was injected five replicates into the HPLC system and the observations were recorded.

The specificity of the RP-HPLC method was studied by injecting the placebo (lactose 50 mg, magnesium Stearate 2 mg, microcrystalline cellulose 50 mg, Starch 55 mg and Talc 5 mg) of the tablets prepared in the diluents as per the procedure applied to sample solution. No peak was detected at the retention time of NTZ and OFX hence proving the specificity of the method. Linearity for both drugs was checked by preparing standard solutions at 18 different concentration levels ranging from 5-90 mg/ml and 2-36 mg/ml for NTZ and OFX, respectively. From the mean of standard peak area observed and the respective concentration values, the response ratios (response factor) were found out by dividing the peak area with the respective concentration. The response curve was plotted between standard (peak area/ concentration) v/s concentration. To study validity and reproducibility of proposed method, recovery studies were carried out by applying the standard addition method. A known amount of drug corresponding to 80, 100 and 120% of the label claim was added to preanalysed sample. The percentage recoveries were calculated six times, at each level of recovery. Repeatability was performed by inter-day and intraday precision. The intra-day precision was determined by analyzed the three different concentration of drug for three times within one day. An interday precision was determined by analyzed the three different concentration of drug for three days in a week. To determine the robustness of the developed method, experimental conditions were deliberately altered and performed the assay of NTZ and OFX bulk samples against its working standard. Various chromatographic conditions used were, 0.5 ml/min and 0.7 ml/min flow rate and 56:36:08 and 66:26:08 v/v/v ratio of acetonitrile:methanol:0.4M citric acid [14,15].

The solution stability of NTZ and OFX in the assay method was carried out by leaving both the test solution of sample and reference standard in tightly capped volumetric flask at room temperature for 8 h. The same solutions were assayed for every one hr interval up to the study period. System suitability testing is an integral part of many analytical procedures. The tests are based on the concept that the equipment, electronics, analytical operations and samples to be analyzed constitute an integral system that can be evaluated as such.

The development of an analytical method for the determination of drugs by HPLC has received considerable attention in recent years because of their importance in quality control of drug products. The objective of this study was to develop a rapid and sensitive HPLC method for estimation of NTZ and OFX in tablet formulations using the most commonly employed RP C-18 column with UV detection. The mobile phase was optimized with acetonitrile-methanol-0.4M citric acid, (60:30:10, v/v/v). From the overlain spectrum of nitazoxanide and ofloxacin, wavelength was selected, at 304 nm, isoabsorptive point for both the drugs. Good resolution was carried out at 304 nm and both drugs showed good absorbance at this wavelength with minimum interference of the other drug. The chromatogram obtained is shown in fig. 1. 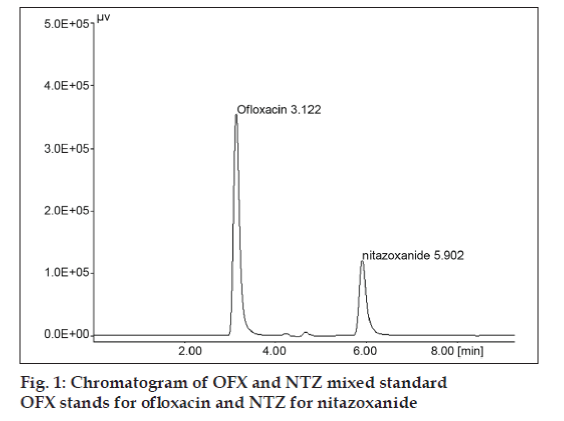 Fig. 1: Chromatogram of OFX and NTZ mixed standard OFX stands for ofloxacin and NTZ for nitazoxanide

Two brands of tablets were analyzed and amount of drugs was determined by proposed method; it was in good agreement with the label claim. Results of NTZ estimation in different tablet dosage form are shown in Table 1. All parameters of these proposed method was validated as per the ICH guidelines.

Table 1: Summary of simultaneous estimation of ofx and ntz in tablets

The accuracy of the method was established using recovery technique i.e. by external addition of standard in to a preanalysed sample at three different levels. The % mean recovery of OFX was found to be 99.93% (sample) and 99.64% (Synthetic mixture) and for NTZ was found to be 99.86% (sample) and 99.27% (Synthetic mixture, Table 2). An accuracy criterion for an assay method is that the mean recovery should desirably be 100±2% at each concentration over the range of 80-120% of target concentration. Since the mean % recovery varies for both drug from 99.27 to 99.93% and are within the desirable confidence interval of 98-102%, (Table 2) it can be said that the proposed method is accurate. In precision experiment, (repeatability study) relative standard deviation for OFX is 0.451 and NTZ is 0.431. It was concluded that the analytical technique showed good repeatability. The calibration curves were repeated three times in a day at three different concentrations and the calibration curve was repeated three times on three different days at three different concentrations. These values confirmed the intraday and interday precision of the method. The intra-day and inter-day % RSD values were calculated which were found to be in the range of 0.62-0.83 for OFX and 0.26-0.57 for NTZ (Table 3). Hence, method at selected wavelength was found to be precise. For the robustness testing, the chromatographic conditions were changed and in all varied chromatographic conditions the resolution between OFX and NTZ was greater than 2.0, illustrating the robustness of the method. During solution stability testing, no significant change was observed in the content of NTZ and OFX. Hence it was concluded that NTZ and OFX solutions are stable for at least 8 h in the developed method. The system suitability parameters were also evaluated and results are summarized in Table 4.

The proposed method is found to be fast, precise, accurate and selective and can be utilized as a quality control tool for simultaneous estimation of NTZ and OFX in tablet dosage form.

The authors are thankful to Alembic Pharmaceutical, Vadodara for providing the gift samples of the drug.