Screening of Aceclofenac for Cocrystallization with Nicotinamide: Theoretical and Practical Perspective

In the last decade, cocrystallization has emerged as a means of tailoring the physicochemical properties, such as solubility and dissolution of biopharmaceutics classification system class-II drugs. The present investigation deals with formulation of cocrystals of Aceclofenac with nicotinamide by mechanical, solvent based techniques and solid state characterization of prepared cocrystals. Aceclofenac and nicotinamide in 1:1 molar ratio were used to formulate cocrystals by cogrinding, acetone based solution and solvent assisted cogrinding technique. The prepared formulations were characterized by powder X-ray diffractometry, differential scanning calorimetry, Fourier transform infrared spectroscopy and Raman spectroscopy and in vitro dissolution study. The formation of possible hydrogen bond motifs between aceclofenac and nicotinamide as heterosynthon like acid-amide, chloride-amide, acid-pyridine and amidechloride heterosynthon were found with improved dissolution rate. In case of cogrinding technique Raman spectroscopy doesn’t reveals the formation of any new phases and interactions these results of cogrinding technique are consistent with differential scanning calorimetry. Aceclofenac forms the cocrystals both theoretically and practically which has been strongly supported by Raman spectroscopy.

The pharmaceutical industry invests a lot in identifying novel Active Pharmaceutical Ingredients (APIs) with useful physiological profiles that could later be formulated into drugs. However, to be considered for scalable and commercial use, an API’s physiochemical properties, which are generally dependent on the dosage form, must be controllable and adhere to the guidelines set up by the regulatory authorities such as the food and drug administration. An API can exist in a variety of solid state forms, which includes polymorphs, solvates, hydrates, salts, cocrystals and amorphous forms. Each phase or form exhibits unique physiochemical properties that can profoundly influence the bioavailability, stability, manufacturability and much more performance characteristics of the formulated API[1-3].

Cocrystals have the advantage that they can be formed regardless of the API’s ionisable status. Instead, their formation relies on complementary functional groups between the API and a biologically safe partner molecule, termed the coformer, to allow for hydrogen bonding or other form of interactions in the solid. The numbers of biologically safe coformers that can be incorporated into cocrystallization are more extensive than the number of acids or bases which can be used in the production of salts[4].

Nicotinamide is a generally recognized as safe class 1 chemical and is often utilized in larger doses to treat high cholesterol than often used in cocrystals formulation[6]. Nicotinamide has been utilized as a coformer for the cocrystallization of celecoxib[7], theophylline[8], ibuprofen[9], carbamazepine[10,11] and lamotrigine[12]. Reported methods of cocrystals formulation or screening are solution cooling crystallization[13], ambient comilling[ 14], cryogenic co-grinding[15], melting[16] and solvent evaporation [17]. It is also formulated with Carbamazepine and evaluated for physicochemical properties. The structures of Aceclofenac and nicotinamide are shown in fig. 1.

Fig. 1: Structures of Aceclofenac and Nicotinamide

The very interesting reference came in a front of us related with nicotinamide by Zhang et al.[18], screened cocrystals formation of nicotinamide with adipic acid, used dispersion-corrected density functional theory to study the formation of energy and volumes of cocrystals. Cocrystals containing nicotinamide decrease the energy and expands the volume it’s like a freezing of water which involves the formation of strong hydrogen bond and weak intermolecular packing. They have also concluded that “Nicotinamide, a flexible molecule, can form cocrystals of comparable stability using two different coformers whose energies are 4 kJ/mole apart”.

Aceclofenac is a nonsteroidal anti-inflammatory agent belongs to biopharmaceutics classification system class II, literature reveals that various attempt has been made to improve the solubility and dissolution rate of Aceclofenac like inclusion molecular complexes with beta and hydroxypropylbeta cyclodextrin [19,20], polyamidoamine dendrimeric solution [21], mixed hydrotropic solution for injection[22] and cogrinding mixture with Neusilin US2 for dissolution rate enhancement [23].

The literature review also reveals that there are reports for cocrystallization of aceclofenac, Mutalik et al.[24], formulated cocrystals with chitosan by solvent change approach and evaluated for analgesic and anti-inflammatory activity for prepared formulations. They found marked increase in dissolution rate and stability at accelerated conditions of temperature and humidity. Chandel et al.[25], formulated cocrystals of aceclofenac with paracetamol by solution cocrystallization, solvent assisted cogrinding, slurry conversion and crystallization from melt, but this work was lacking of through investigation of interactions and evaluation parameters. This work was unable to prove the formation of cocrystals between said two species[25].

Cocrystals of aceclofenac with nicotinamide by neat cogrinding and solvent evaporation technique (dimethyl sulfoxide and nicotinamide) was also reported. In the present investigation theoretical screening has been carried out and cocrystals were prepared by different techniques like cogrinding, liquid assisted cogrinding (acetone) and solution cocrystallization and characterized by some advanced techniques like Raman spectroscopy to support the theory.

Aceclofenac was received as a gift sample from the Lupin Research Park, Pune. Nicotinamide was procured from LobaChemie Pvt. Ltd. Mumbai. All other chemicals were of analytical grade.

Theoretical screening of aceclofenac for cocrystallization with nicotinamide:

Theoretical prediction of miscibility between solute-solute (drug and coformer) was estimated by three methods reported Fedors group contribution, Vankrevalen and Hoy’s molar attraction method and difference between ∂ values (Δ∂) of drug and nicotinamide was calculated.

Aceclofenac (354.2 mg, 1 mmol) and nicotinamide (122.2 mg, 1 mmol/2 mmol) were dissolved in 20 ml of acetone with warming. The solution was filtered through a 0.2 μm Whatmann filter paper, cooled at room temperature to crystallize the material. The formed material were isolated by filtration and allowed to dry at room temperature (25°-30°) in a watch glass.

Aceclofenac (354.2 mg, 1 mmol) and nicotinamide (122.2 mg, 1 mmol/2 mmol) were triturated in laboratory mortar pestle for constant period of time 30 min with or without addition of 2-4 drops of acetone. The crystals were dried in the watch glass at room temperature (25°-30°).

The Raman spectra of the pure drug and prepared formulations were recorded in the spectral range of 0-5000 cm-1 using a Raman spectrometer (Bruker Multi RAM, Germany Make) equipped with an Nd: YAG laser source with an at excitation wavelength of 1064 nm and resolution 4 cm- 1.

The pure aceclofenac showed the characteristic peaks at 3317.56, 3273.20, 1714.72, 1577.77, 1280.73, 1344.38, 746.45, 2935.66 and 1450.47 cm- 1 for -NH, OH, C=O, C-C, C-N, O-H plane bending, aromatic out of plane bending C-H, C-H and aromatic ring stretching. The important peak of chlorine which is a halogen was also observed in the range of 800-900 cm- 1. Some shifting, overlapping and broadening of peaks has been observed in case of prepared formulations in the region of 3400-3100 cm- 1 indicates presence of hydrogen bonding as shown in Table 2 and fig. 2. The decrease in frequency of C-Cl stretch of Aceclofenac, C=O and N-H stretch of amide implies that they participate in strong hydrogen bonding. In case of solution cocrystallization, shifting of the peaks to the higher side reflects the weak hydrogen bonding between aceclofenac-nicotinamide. A formulation reveals that formation of new phases and may be π-π stacking interaction [26]. The aceclofenac showed peak at 2θ of 22.18 and 25.87 with intensity of 2516 and 2105 respectively agrees with the reported work by Sawant et al.[27]. Nicotinamide showed intense peak at 2θ of 22.18 with intensity of 16 416 [28]. In physical mixture there was no appearance of peak of nicotinamide near to 15; 2θ indicates the dilution of nicotinamide by Aceclofenac. In case of formulations prepared by different methods like cogrinding, solvent assisted cogrinding and solution cocrystallization, the shifting of 25.87 peak of aceclofenac to higher, lower side with change in intensity indicates the formation of new phases[29,30]. It is also supported by DSC analysis that final formulations were in a crystalline state as shown in fig. 3. The DSC spectra of aceclofenac showed endothermic peak and enthalpy ΔH values of 153.72° and 169.2693 J/g respectively. For nicotinamide showed endothermic peak and enthalpy ΔH values of 130.56° and 270.368 J/g respectively[31]. In case of physical mixture two endothermic peaks 120.33° (ΔH=0.7085 J/g) and 130.16° (ΔH=3.582 J/g) which indicates depression of melting point of both in presence of each other. In case of cogrinding 91.33° (ΔH=119.50 J/g), no sharp endothermic peak reveals the amorphonization of drug but not in agreement with PXRD. In case of liquid assisted cogrinding and solution cocrystallization endothermic peak at 92.27° (ΔH=73.777 J/g) and 93.58° (ΔH=94.2152 J/g) as shown in fig. 4 and fig. 5. As per the reported literature nicotinamide contains the stronger hydrogen bonds, when it forms the complexes shortening of hydrogen bond occurs also negative correlation between enthalpy and volume has been reported that may be the reason for showing the endotherms below the pure aceclofenac and nicotinamide[18]. As per Babu et al.[30], the appearance of single peak indicates the absence of unbound or absorbed solvents or water and shows the stability of the phase until melting. Fig. 4: DSC analysis of (A): Pure Aceclofenac; (B): Physical mixture of ACL and nicotinamide and (C): Cogrinding 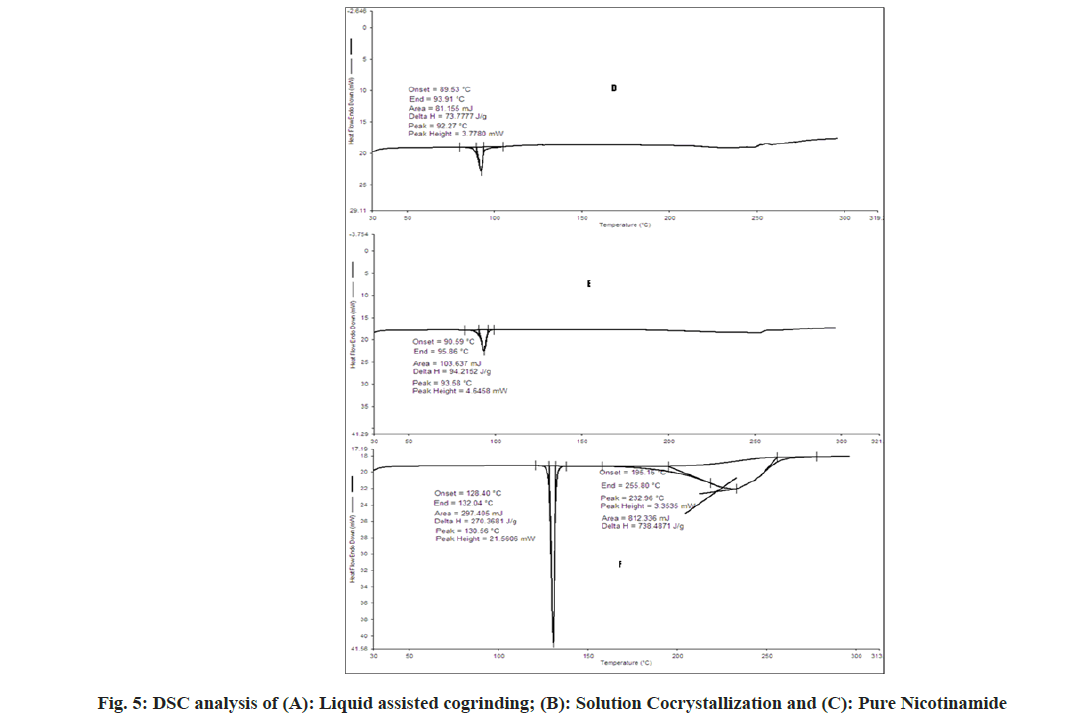 As per the reported literature Raman spectroscopy gives the idea is the formed complex is salt or cocrystals. The Raman spectra of nicotinamide showed the bands at 1681 and 1042 cm-1 corresponding to C=O stretching and Amino Radical (-NH2) rocking. Aceclofenac showed Raman bands at 1580, 1725, 718 for aromatic chain vibrations, C=O and C-Cl functional group. The medium peaks were also observed in the range of 3500-3300 cm-1 for N-H lattice vibrations.

As per Alam et al. [32], to form a salt with amine bases the carbonyl group bands shift to lower side by 30-40 cm-1. In case of aceclofenac-nicotinamide, by acetone assisted and solution based technique bands are shifted to 1727 and 1738 cm-1 respectively. It concludes that the formation of new phases and formed phases were cocrystals not a salt. In case of both the methods nicotinamide, C=O shifted to 1669 cm-1. NH2 rocking shifted to 1044 and 1031 cm-1 as shown in fig. 6 and fig. 7. In case of cogrinding technique Raman spectroscopy doesn’t reveals the formation of any new phases and interactions. The results of cogrinding technique are consistent with DSC. 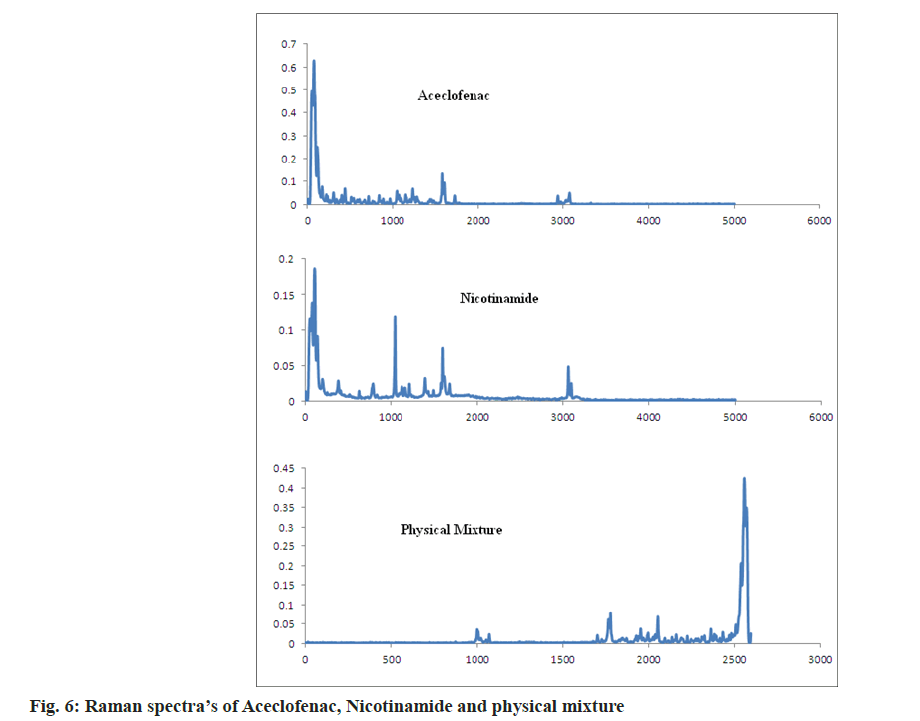 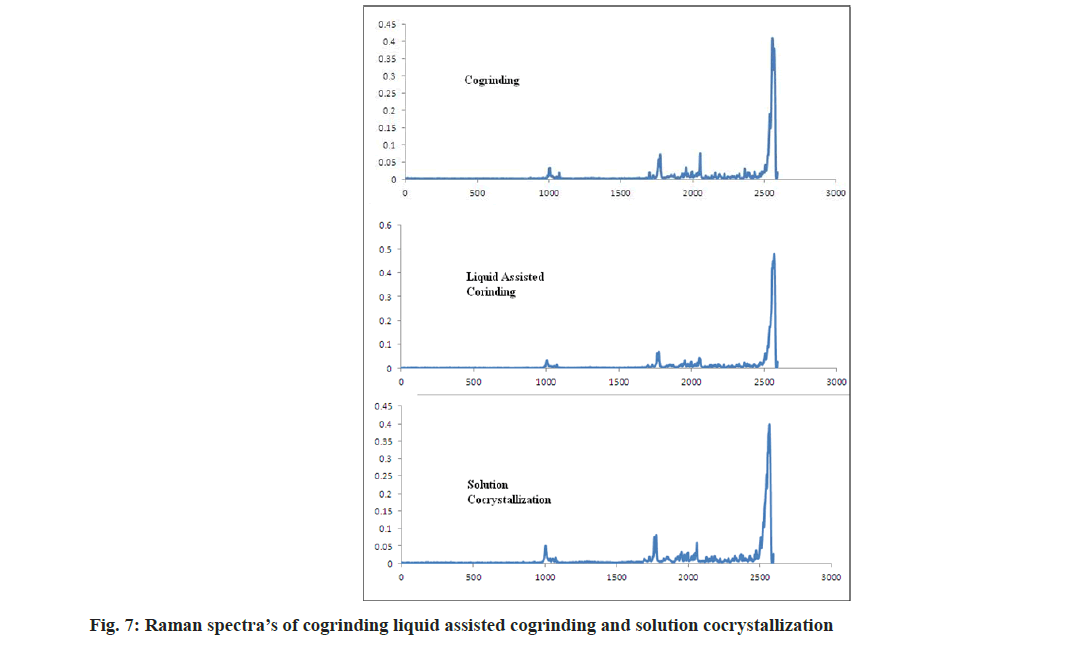 The pure drug and physical mixture showed the 73 % and 78 % of drug release at the end of 2 h. As shown in fig. 8, the prepared formulations showed improvement in dissolution rate, solution and liquid assisted cocrystallization showed 86 % and 82 % respectively. This might be due to lower values for the ΔH, 94.2152 J/g and 73.7777 J/g. which indicates the decrease in crystallinity also [24]. In case of dissolution of cocrystals solution mediated phase transformation is important, but dissociation of individual components from the complex of Aceclofenac:nicotinamide can decide the rate of solution mediated phase transformation. In present in vitro dissolution studies, it was observed that slow dissociation to individual compounds gave improved drug release [33].

The above dissolution data has been subjected to determine the drug release kinetics as stated by researchers “the type of API, its polymorphic form, crystallinity, particle size, shape and solubility can influence the release kinetics” [34]. In present investigation pure aceclofenac follows the zero order of kinetics and cocrystals based formulation followed the Higuchi type of model. There may be drug concentration in the matrix is lower than its solubility of cocrystals.

The above results reveal the formation of new phases or cocrystals between the aceclofenac and nicotinamide by solvent mediated and solution cocrystallization method with incremental dissolution rate. It may be useful to enhance the bioavailability of Aceclofenac. Aceclofenac forms the cocrystals both theoretically and practically which has been strongly supported by Raman spectroscopy.