Self medication practices among medical students of a private institute

Arti A. Kasulkar* and M. Gupta1

The study was undertaken to evaluate various aspects of self-medication in medical students. A prospective, cross-sectional, questionnaire-based study was carried out among 488 medical students selected by simple random sampling from January 2013 to June 2013. Data was collected and analyzed for counts and percentage. Students reported self-medication in the preceding one year was 71.7 % and the prevalence was more in final year students. Fever and headache were the most frequently reported illnesses, commonly used drugs were antipyretics and analgesics, obtained information through reading material, and reasons quoted were minor ailments and quick relief. Majority students agreed that medical knowledge is necessary for administration of medicine by self. Self-medication is highly prevalent in medical students, which is quite alarming.

Inapt medicinal use is a major problem for ensuring effectual and safe medications. Most of the common health ailments are treated by general population themselves without medical supervision, which, in general is termed as self-medication (SM). SM is a behavioral response of human beings in which, an individual uses drugs to treat self-diagnosed minor symptoms or disorders having the potential to do good as well as harm as it involves use of drugs. It is widely practiced worldwide in urban and rural population including developing countries like India because many drugs are dispensed overthe- counter without prescription and it provides a low cost alternative for people [1]. It might be due to number of factors like socioeconomic status, lifestyle, ready access to drugs, and greater availability of medicinal products which are existing in developing countries [2]. It is an important issue as far as the health of an individual is concerned. The practice of SM must be based on authentic medical information to avoid irrational use of drugs which, in turn can cause wastage of resources, increased resistance of pathogens and can lead to serious health hazards like prolonged sufferings, drug reaction and drug dependence. SM is now increasingly being considered as a component of self-care [3]. On the contrary if practiced properly, it can be used positively to treat various minor ailments, can save time and money, and can save lives in acute conditions. The World Health Organization (WHO) also has pointed out that responsible SM can help to prevent and treat ailments that don’t require medical consultation and can provide a cheaper alternative for treating common illnesses. However, it is also recognized that responsible SM must be accompanied by appropriate health information [4]. Nonprescription drugs amongst youth, especially in students are being misused due to exposure to media and advertisements. It has become a serious ailment raising the concern of incorrect diagnosis and drug reaction as well. Being future medical practitioners, SM has a special impact in medical students. Prevalence of SM was found to vary in medical students of different countries in earlier studies [5-9] undertaken to ascertain the SM practice among medical students. Since majority of the studies were conducted in countries other than India, pattern of SM practices in our country remained uncharted. With this in mind, the present study was planned to determine the pattern of SM practices, to find out the common ailments and common drugs used, reasons for SM along with assessing relationship between the level of medical education and the SM practices among medical undergraduates.

After obtaining approval from the Institutional Ethical Committee, a prospective, cross-sectional, questionnaire-based study was carried out at N. K. P. Salve Institute of Medical Sciences and Research Centre, Nagpur, from January 2013 to June 2013 [IEC/NKP SIMS-84/2013]. The study was conducted on 488 medical students of all batches selected by simple random sampling. History of SM in the preceding one year from the day of study was noted. A structured and validated questionnaire was used for the study to collect information regarding age, gender, awareness of SM practice, type of drugs self-medicated, source of information. Before starting the study, it was pretested on a group of 20 students, 5 students from each batch, who were excluded from final analysis. Prior to administrating the questionnaire, the students were addressed regarding the purpose and process of data collection. They were informed that data collected would be anonymous and their participation would be voluntary. Questionnaires were distributed among the participants after taking informed consent. Data was analyzed statistically using SPSS version 18 for counts and percentage. Some questions being multiple options, sum of percentage is not always 100%. 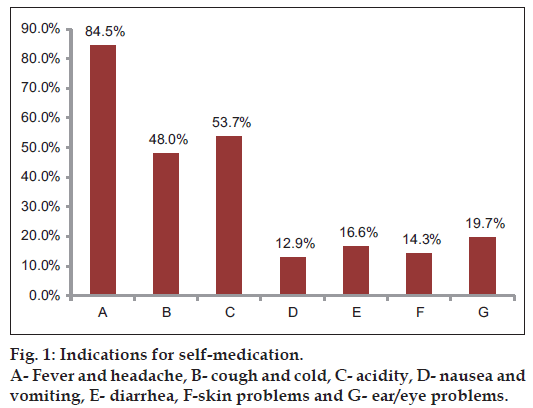 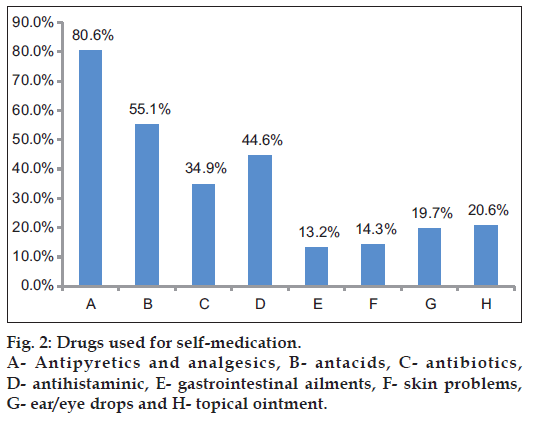 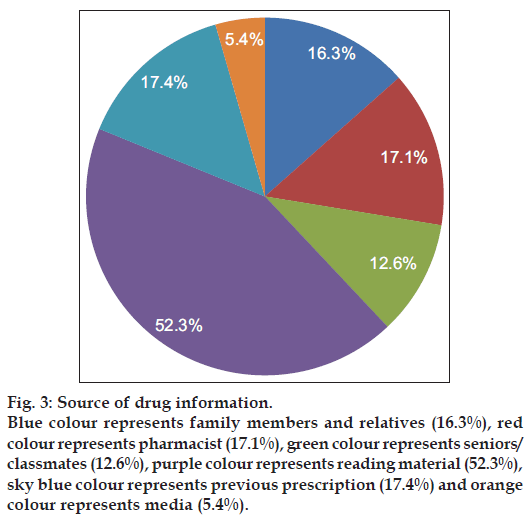 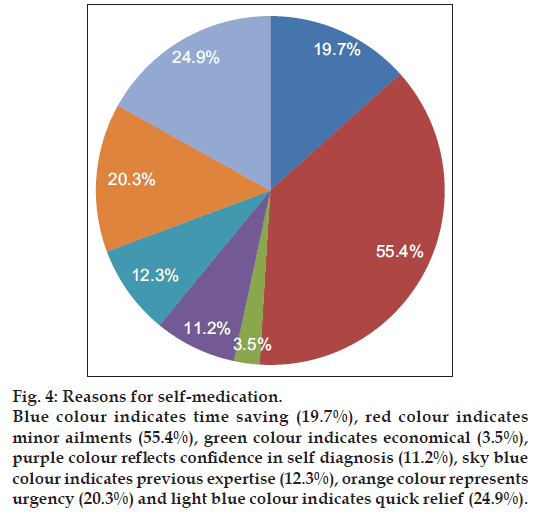 SM is the utilization of medicines by persons on their own without any proficient medical supervision. In developing countries like India, most episodes are treated by SM due to easy availability of non-prescription drugs. It is a prominent constraint in ensuring the safe and effective use of medicines. It is more likely to be inappropriate without complete knowledge although it is becoming a routine practice nowadays especially by undergraduate medical students [5-13].

The present study revealed that 71.7% of students reported SM practices in the preceding one year. However, various studies have reported different prevalence figures ranging from 43.2 to 91% [8-16]. It is very difficult to compare the prevalence of different studies with present study due to different demographic characteristics, different methodology, and different socioeconomic status. The prevalence of SM varied amongst different years of students and found increasing from first year to final year and the reason might be the knowledge of medicines in final year students which is comparable with the findings of previously conducted studies [9,11-16]. Conversely, a study carried out in Maharashtra reported more prevalence in first year students [17]. Also, the SM practice was found more in female students as compared to male students which is in concordance with previous works [10,13,15,17,18], whereas few studies reported similar proportion in both sexes [8] and slightly higher in males as compared to females [11,16,19].

Among the self-medicators, the majority followed allopathic system of medicine followed by ayurvedic and homeopathic system of medicine which is in conformity with earlier studies [12-14], which, might be due to easy access of allopathic medicines. The reason attributed to the use of other system of medicines have been stated as practice from childhood, earlier prescriptions available for same ailments, easy accessibility, belief in those systems. The commonest illnesses that led to SM in this study (fever, headache, acidity) were also reported similarly in other studies [7-14,17,18,20-22], though it differs from a study carried out in South India which revealed cough and cold as the most common reason [19]. Various researchers [7,9-14,16,17,19-22] revealed antipyretics and analgesics as commonly used drugs for SM which, is in agreement with the present study whereas, the study carried out in a tertiary care medical college of West Bengal reported antibiotics to be the most commonly used drugs [15].

Regarding frequency of SM, most of the students had taken medicines on as and when required basis followed by once daily. Majority of students preferred oral route followed by topical and inhalational route for SM which, is in congruence with findings of study conducted in Gujarat [12]. The study group mentioned the most common source of information for SM as reading material followed by previous prescriptions; this is comparable with previously conducted studies [7,9,19]. On the contrary, other studies revealed the source of information as self decision [10], seniors [11,17], family and friends [12,21], and previous prescriptions [13-14,18,20]. With respect to the source of drug procurement, we observed that the pharmacy and free physician samples were the most common source which is similar to the results of previous studies [9-12,17]. The reason being easy availability and prior relief from the illness by the drug procured from the pharmacy. Though the students have easy accessibility to the physicians the cumbersome procedure of consultation, prescription procurement and then going to the pharmacy increased the practice of SM.

Most common reasons for SM reported in our study were minor ailments and quick relief. These findings are comparable with the findings in literature [11,13,15,17,20], however other workers reported previous expertise [8-10,12], lack of time to consult doctor [14,19], quick relief [18], and time saving [21] as common ailments. The observations regarding reading package inserts and labels and following the instructions written on them are in accordance with earlier studies [7,8,12,17,18,22]. Our findings regarding awareness of non-prescription medicines are in agreement with the findings of studies carried out in Maharashtra and Jammu [7,14]. The findings of various studies [7,12] regarding awareness of dose and frequency are comparable with the present study. Findings regarding awareness about expiry date are in accordance with previous studies [12,13,22] and that of awareness about importance of completing course of medicines is supported by findings of the study carried out in Maharashtra [7].

Majority of the students irrespective of the year of the study reported that they were aware of adverse effects of medicines used by them which, are analogous with the findings of other workers [7,12,14,16,17,19,21,22]. Findings related to adverse effects of medicines are in agreement with the studies conducted in Egypt and India [16,17], but differ from previous studies [11,19]. Majority of students agreed that medical knowledge is necessary for administration of medicine by self which, is in accordance with other studies [8,12].

Thus our study demonstrates that SM is highly prevalent in medical students of Central India. Although the occurrence of SM is more in senior students, junior students who are not yet exposed to facts of drugs are also indulged in same, the reason might be the awareness of drugs due to easy accessibility of information through media. Since SM is at an alarming pace, education of the youth to ensure safe practices is the need of the hour. Though SM is difficult to eradicate, various measures can be taken to discourage such practices. If action is not taken, the danger of interactions and adverse effects could increase. For this, we conducted a 3-hour awareness program to educate the students regarding various aspects of SM. The inputs were basics of pharmacology, adverse effects of drugs, and prescription drugs and its importance. This will sensitize the students regarding the irrational use of medicines in terms of SM and will also guide in the designing various health education strategies which, are required to educate the students and the community in large.

We would like to thank students of N. K. P. Salve Institute of Medical Sciences and Research Centre, Nagpur for their valuable cooperation and help to complete the study.