The objective of this work was to develop and validate a simple, rapid, precise, and accurate high performance thin layer chromatography method for simultaneous determination of withanolide A and bacoside A in combined dosage form. The stationary phase used was silica gel G60F254. The mobile phase used was mixture of ethyl acetate: methanol: toluene: water (4:1:1:0.5 v/v/v/v). The detection of spots was carried out at 320 nm using absorbance reflectance mode. The method was validated in terms of linearity, accuracy, precision and specificity. The calibration curve was found to be linear between 200 to 800 ng/spot for withanolide A and 50 to 350 ng/spot for bacoside A. The limit of detection and limit of quantification for the withanolide A were found to be 3.05 and 10.06 ng/spot, respectively and for bacoside A 8.3 and 27.39 ng/spot, respectively. The proposed method can be successfully used to determine the drug content of marketed formulation.

Withanolide A is a steroidal lactone present in dried roots of Withania somnifera (linn.)(Physalis somnifera) belonging to family Solanaceae. Bacoside A is a glycoside present in leaves and stem of Bacopa monnieri (linn.) or Herpestis monnieri (linn.) belonging to family Scrophulariaceae [1]. Both the herb is important plant in the treatment of stress [2,3]. Effective formulations are present in market for both plant extracts individually and also in combination.

The aim of the present investigation is to develop a HPTLC method for the simultaneous determination withanolide A and bacoside A. We have developed a method using ethyl acetate: methanol: toluene: water (4:1:1:0.5 v/v/v/v) as mobile phase on silica gel 60 F254 HPTLC plates (0.2 mm; Merck). Quantitative estimation was accomplished by densitometric scanning with UV detector at 320 nm wavelength.

Identification and quality evaluation of crude drugs is fundamental requirement of industry and other organizations dealing with Ayurvedic and herbal products. Unfortunately, this requirement is often not possible to meet with the usual pharmacognostic test such as macro and microscopic evaluation, ash and extractive value etc. Directive on analytical control of crude drugs must take account of the fact that the material to be examined has complex and inconsistent composition. Therefore, the analytical limits are not as precise as those for single chemical entity. Adequate standard using chemical, instrumental and physicochemical methods is necessary [6].

Withanolide A and bacoside A standard were supplied by Natural Remedies Bangalore, India. Spansules containing Withania somnifera (250 mg) and Bacopa mooneri (250 mg) were procured from the local pharamcy (Herbocam, Unijules Life sciences Ltd. Nagpur, India). All the chemicals and reagents used were of analytical grade.

Accurately weighed amount of standard withanolide A (10 mg) and bacoside A (5 mg) were transferred to 100 ml volumetric flask, separately and dissolved into and diluted up to the mark with methanol. The resulting solutions were sonicated for 15 min and filtered through Whatman filter paper No. 41. An aliquots portion of standard stock solution of withanolide A (100 μg/ml) and bacoside A (50 μg/ ml) were applied as band ranging from 2-8 μl and 1-8 μl, respectively on TLC plate with Linomat V. The plates were placed in twin trough glass chamber previously saturated for 10 min with developing mobile phase. The plates were developed by normal vertical developing tank at ambient temperature for a distance of 80 mm. After development the plates were air dried and evaluated densitometrically in reflectance mode at 320 nm. Calibration curve was constructed by plotting peak areas versus concentration (ng/ml) and regression equation was calculated.

Selection of the wavelength for densitometric evaluation was done by taking the spectrum of peak obtained from the standard withanolide A and bacoside A (fig. 1). Wavelength of 320 nm was chosen as a common wavelength to match the concentration ratio of the drugs present in the formulation. The mobile phase of ethyl acetate: methanol: toluene: water (4:1:1:0.5 v/v/v/v) was selected because it gave highest resolution, minimum tailing and Rf values of 0.16 and 0.57 for withanolide A and bacoside A, respectively (fig. 2). 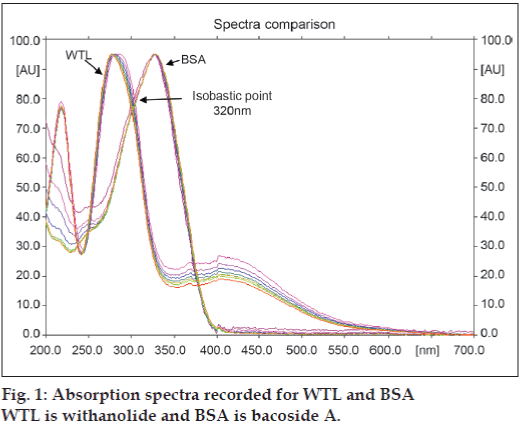 Figure 1: Absorption spectra recorded for WTL and BSA
WTL is withanolide and BSA is bacoside A. 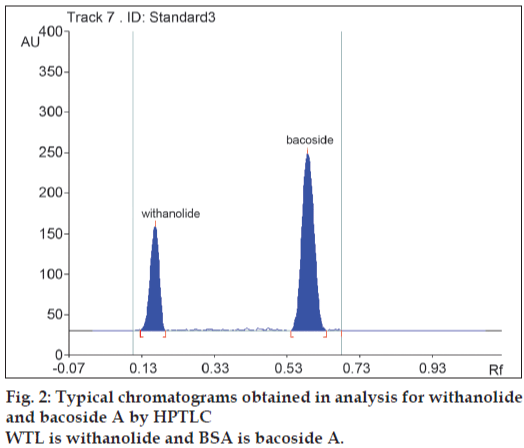 Twenty marketed spansules were accurately weighed and finely powdered. An accurately weighed amount equivalent to 100 mg of withanolide A (equivalent to 50 mg of bacoside A) was transferred into 50 ml volumetric flask, along with 50 ml of methanol. The resulting solution was sonicated for 45 min, filtered through Whatman filter paper No. 41 and transferred into 250 ml volumetric flask; finally volume was made to mark with methanol. Further, the stock solution was diluted with methanol to get concentration of 1000 μg/ml for withanolide A (500 μg/ml for bacoside A). Two microliters of this solution was applied on TLC plate with Linomat V. the plates was developed in twin trough glass chamber under operating conditions described above and calculations were performed using peak area.

System suitability tests are used to verify the reproducibility of the chromatographic system. To ascertain effectiveness of HPTLC method, system suitability tests were carried out on freshly prepared working standard solutions of withanolide A and bacoside A. This solution was spotted ﬁve times; parameters such as limit of detection (LOD) and limit of quantiﬁcation (LOQ) were studied (Table 1). The calibration curve was linear in concentration range of 200-800 ng/spot and 50-350 ng/spot with regression 0.9968 and 0.9985, slope 3.908 and 2.694 for withanolide A and bacoside A, respectively (Table 2).

TABLE 1: DETECTION/QUANTIFIATION LIMITS OF WITHANOLIDE A AND BACOSIDE A DETERMINATION (n=5)

TABLE 2: CALIBRATION CURVE DATA OF WITHANOLIDE A AND BACOSIDE A

The amounts of withanolide A and bacoside A were found by the number of replicates of pharmaceutical preparation (n=5) performed by the inter-day assays. The statistical parameter and results are reported in Table 3. The relative standard deviation observed for both the drugs were very low. Recovery studies were carried out to study accuracy and precision of the method. These studies were carried out on plate at four levels i.e. multiple level recovery studies. Two microliters of pre-analyzed sample preparation of withanolide A (311.19 ng) and bacoside A (70.69) was applied four times on TLC plate as band of 8 mm. These bands were spiked on the plate with withanolide A and bacoside A standard stock solution and analysed by the method. The % recovery was calculated by using formula, % recovery= (T-A)/ S×100 where, T is total amount of drug estimated, A is amount of drug contributed by spansules powder and S is the amount of pure drug added. The result of recovery studies for both withanolide A and bacoside A was found to be around 99-100% (Table 4).

TABLE 3: ANALYSIS DATA OF WITHANOLIDE A AND BACOSIDE A IN PHARMACEUTICAL FORMULATIONS

an is number of determinations, bRSD is relative standard deviation.

TABLE 4: ACCURACY AND PRECISION EVALUATION IN WITHANOLIDE A AND BACOSIDE A ANALYSIS OF PHARMACEUTICAL FORMULATIONS (n=5)

This method was developed for the ﬁrst time on HPTLC to estimate the two drugs in formulation, in order to analyze more samples at a time. The method is easy to perform, precise and accurate. There is significant difference between the RF values of the withanolide A and bacoside A; therefore this analytical method can be utilizes for the simultaneous estimation of this substances.

Authors are very grateful to Unijules Life Sciences Nagpur, India for their valuable cooperation and guidance to carry out study on HPTLC.