Simultaneous estimation of aloe emodin and emodin from Rheum emodi, Cassia alata and Aloes by HPTLC

A simple, precise, specific, accurate high performance thin layer chromatography method was developed for simultaneous estimation of aloe emodin and emodin from medicinal plants like Rheum emodi (Rhubarb), Barbados aloes (dried juice of Aloe barbadensis leaf) and Cassia alata (Candle bush). Thin layer chromatographic aluminum plates pre-coated with silica gel 60 F254was used as the stationary phase for chromatographic separation of the drugs. Toluene:ethyl acetate:formic acid (10:2:1 v/v/v) was selected as mobile phase and analysis was carried out in absorbance mode at iso-absorptive wavelength of 263 nm. This method shows good resolution for both drugs with retention factor 0.37±0.03 and 0.55±0.03 for aloe emodin and emodin, respectively. The regression analysis data indicated good linear relationship for the calibration plots for aloe emodin and emodin in the range of 300 - 800 ng/spot and 150 - 400 ng/spot and regression coefficient was 0.9993 and 0.9994, respectively. Validation of the method was performed according to International Conference on Harmonisation guidelines for following parameters: Accuracy, precision, limit of detection, linearity, limit of quantification, robustness and specificity. In conclusion, the developed method was found to be rapid, simple, reliable and specific for the identification and quantitation of these anthraquinones in medicinal plants and marketed formulations.

Anthraquinones are class of naturally occurring phenolic compounds based on the 9, 10-anthraquinone skeleton. They are found in plants usually in minute amounts, especially in family of Polygonaceae, Fabaceae, and Liliaceae. Aloe emodin and emodin are major anthraquinones present in rhubarb, cascara, aloes, candle bush [1]. They have been reported to have laxative, anticancer, anti-inflammatory, anti-aging, antioxidant and antitumor activities [2,3]. Literature survey revealed numerous studies, which have been carried out on the quantitative estimation of aloe emodin and emodin individually by HPTLC, GC/MS and in combination by HPLC [4-6]. They have gained considerable interest because of the increasing use of herbal drugs as alternatives to modern medicine and their potential beneficial effects on human health (fig. 1a and b). Animal studies reveal that aloe emodin and emodin show anti proliferative activity by producing cytotoxic effects, cell cycle arrest and apoptosis in human tongue and breast cancer cells. There are many marketed formulations, which contain aloe emodin and emodin as constituents. The marketed formulations with more than one chemical constituent showing a good therapeutic activity needs to be validated as per standard analytical procedures.

The critical factors needed to be considered while developing a new method are physicochemical properties of analyte (pH, solubility), extraction method, sample preparation, selection of mobile phase and stationary phase, solution stability, etc. The high performance thin layer chromatography (HPTLC) method developed is accurate, robust, precise and specific for the determination of aloe emodin and emodin in plants like rhubarb, barbados aloes, candle bush and in marketed formulations. The developed method is superior to previously reported methods as it is less time consuming, less solvent required for mobile phase as compared to HPLC and GC/MS, sample preparation is easy, low analytical requirement, visual detection is possible, less chances of cross contamination and low cost required. The proposed method was validated as per International Conference on Harmonisation (ICH) guidelines.

Reference standard of aloe emodin and emodin were procured from Total Herb Solutions, Mumbai. Aloe emodin and emodin are anthraquinones with empirical formula C15H10O5 and molecular weight 270.24 g/mol. Melting point of aloe emodin and emodin was found to be 224° and 257°, respectively. Solublity of aloe emodin and emodin was observed in alcohol. Analytical grade reagents used were toluene, ethyl acetate, formic acid and methanol (S. D. Fine-Chem Limited, Mumbai, India). Rhubarb rhizome and aloes were purchased from Yucca Enterprises and fresh leaves of candle bush were collected from Seawoods-Darave, Navi Mumbai. All plant materials were dried and authenticated for their correct botanical identity. The marketed formulations Amlycure D.S. capsules (Aimil Pharmaceuticals (I) Ltd.) and Divya Udarkalp Churna (Swami Baba Ramdev Medicals) were purchased from local retail pharmacy. The HPTLC system consist of a Camag Linomat V sample applicator equipped with a 100 μl Hamilton syringe. Merck TLC aluminium plates (10×10 cm) pre-coated with silica gel 60 F254 was used for spotting. Standard solutions of markers and samples were applied as bands by use of a Camag Linomat V sample applicator from the bottom edge of same chromatographic plate. Analysis was carried out utilizing Camag TLC scanner-3 for scanning at 263 nm with Camag WinCATS software. Camag glass twin-trough chamber (10×10 cm) was used [7]. Aloe emodin and emodin stock solutions (1000 μ g/ml) were prepared by dissolving accurately weighed 10 mg of each standard in 10 ml methanol. The dried rhubarb rhizome, aloes and dried candle bush leaves were powdered using domestic mixer. 10 g of powdered aloes was extracted using 100 ml methanol. To facilitate extraction, magnetic stirrer was used for 48 h. 130 g of rhubarb rhizome powder and 45 g of candle bush leaves powder were extracted separately with chloroform till complete exhaustion using soxhlet extractor. Extracts were concentrated using rotary vacuum evaporator at 40° and stored in the vacuum desiccator until its use in analysis. Test solutions were prepared by weighing 100 mg of each dried extract and aloes were dissolved in 80 ml of methanol and final volume was made up to 100 ml with methanol to get 1 mg/ ml stock solution. 10 g and 20 g of Amlycure D. S. capsules were extracted separately with 50 ml methanol by magnetic stirrer for 24 h, filtered through Whatmann filter paper and this procedure was repeated again using fresh 50 ml methanol for next 24 h and these solutions were used for emodin and aloe emodin quantification, respectively. The final volume was made upto 100 ml with methanol. 10 g of Divya Udarkalp Churna was extracted with 25 ml methanol by sonication for 30 min, filtered through Whatmann filter paper and this procedure was consecutively repeated using fresh 25 ml methanol for three times. The final volume was made upto 100 ml with methanol and this solution was used for aloe emodin quantification. Then 5 ml of this solution is further diluted to 10 ml with methanol and was used for emodin quantification.

Merck silica gel 60 F254 plates (10×10 cm) were used for HPTLC analysis. The mobile phase toluene: ethyl acetate: formic acid (10:2:1 v/v/v) was used for chromatographic ascending development to migration distance of 80 mm. The chamber was previously saturated for 30 min at temperature 25±2°. Bands of 6 mm wide of standard and sample solutions were applied at bottom of the chromatographic plate at 10 mm distance [8]. The plates were dried after development and quantification of aloe emodin and emodin was performed at absorbance mode by scanning at iso-absorptive wavelength of 263 nm using deuterium lamp with Camag TLC scanner-3.

Validation of developed method was carried out as per ICH guidelines [9]. Accuracy is also known as percent recovery. Samples of known concentrations were applied and then spiked further by 80, 100, and 120% w/w amount of analyte in triplicate and the accuracy is then calculated as percentage of analyte recovered from assay. Precision provides an indication of random error. Determination of repeatability and intermediate precision was carried out by measuring intraday variation and interday variation, respectively in triplicate. The precision performed three times on same day was termed as intraday precision while the precision performed over three different days was known as interday precision. Determination of aloe emodin and emodin simultaneously for three different days at three concentration levels 400, 600, 700 ng/spot and 200, 300, 350 ng/spot was performed, respectively and the results were expressed as percent relative standard deviation. The system precision was carried out with 6 replicates of same concentration of 600 ng/spot for aloe emodin and 300 ng/spot for emodin and % RSD of the replicate injections was calculated. Limit of detection (LOD) and limit of quantification (LOQ) were defined as k*SD/s (k is constant, s is slope of calibration curve and SD is standard deviation). The amount for which signal to noise ratios (S/N) were 3 and 10, respectively is defined as LOD and LOQ. The linearity of an analytical procedure is its ability to obtain test results, which are directly proportional to the concentration of analyte in the sample Linearity was observed by plotting drug concentration against peak area for each standard and was validated by the correlation coefficients. Aloe emodin and emodin showed linear relationship in the concentration range of 300-800 ng/spot and 150-400 ng/spot, respectively. The robustness of the method was studied in triplicate at 500 ng/spot and 700 ng/spot for aloe emodin and 250 ng/spot and 350 ng/spot for emodin by deliberately making small changes such as chamber saturation time variation (±5 min), variation in mobile phase volume (±5%) and in mobile phase composition (10.2:9.8:1 v/v/v) and (9.8:2.2:1 v/v/v). Specificity of the method was performed by applying standard and test solutions and by confirming their Rf values and differentiating standards from other closely related compounds, showing that the method was specific. The peak purity was evaluated by comparing the spectrum of standard aloe emodin and emodin with sample. 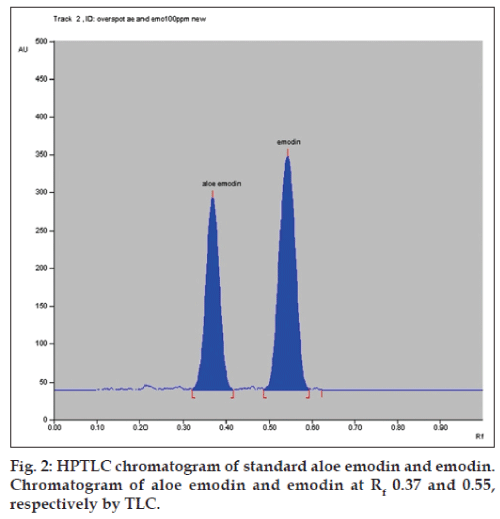 Each result is an average of three observations performed at 80%, 100% and 120% levels. RSD is relative standard deviation

Each result is an average of three observations performed at 80%, 100% and 120% levels. RSD: Relative standard deviation

Each result is an average of three observations. Concentration levels used for precision parameter was 400, 600,700 ng/spot for aloe emodin and 200, 300, 350 ng/spot for emodin. RSD is relative standard deviation 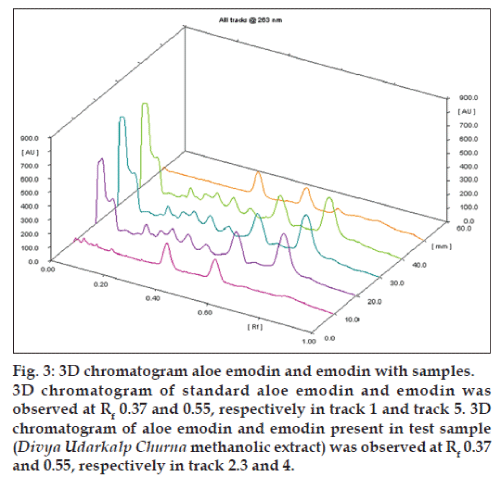 These above results revealed that the developed method enables rapid, precise, reliable, and highly accurate simultaneous estimation of aloe emodin and emodin in medicinal plants and marketed formulations. Validation of the method was done according to ICH guidelines. The developed method was found to be simple, accurate, precise and specific for simultaneous estimation of aloe emodin and emodin from Rheum emodi, Cassia alata, aloes and marketed formulations.