Simultaneous estimation of mefenamic acid and ethamsylate in tablets

The simple spectrophotometric methods for the determination of mefenamic acid and ethamsylate in pharmaceutical formulations have been developed. The methods are based on the additivity of absorbances and the determination of graphical absorbance ratio at two selected wavelengths, one being the isoabsorptive point for the two drugs (301 nm) and the other being the absorption maximum of mefenamic acid (336 nm) and ethamsylate (305 nm). The Beer Lambert's law is obeyed for mefenamic acid in the concentration range 4-28 µg/ml and for ethamsylate is 10-60 µg/ml. Both the methods were found to be simple, rapid, and accurate and can be adopted in routine analysis of drugs in formulations. The accuracy and reproducibility of the proposed method was statistically validated by recovery studies.

Mefenamic acid, N-(2,3-Xylyl)-2-aminobenzoic acid is an analgesic and non-steroidal antiinflammatory drug with haemostatic drug ethamsylate, 2, 5-dihydrobenzene sulfonic acid used as combination drug therapy for treatment of painful menstruation. Mefenamic acid is official in BP [1], USP [2] and IP [3], while Ethamsylate is official in BP [4]. The BP suggest a spectrophotometric and IP suggest a potentiometric method for the assay of mefenamic acid in bulk drugs. BP suggests potentiometric method for the estimation of ethamsylate in bulk drugs. Literature survey revealed that HPLC [5] and spectrophotometric [6] methods have been reported for the estimation of mefenamic acid and spectrophotometric [7] and chemiluminescence [8] methods for the ethamsylate in pharmaceutical dosage forms. The review of literature revealed that there is no simultaneous method for the estimation of the above drugs in combined dosage forms, which strongly advocates the need of simple, rapid and accurate simultaneous method for the routine analysis of the combined dosage forms. 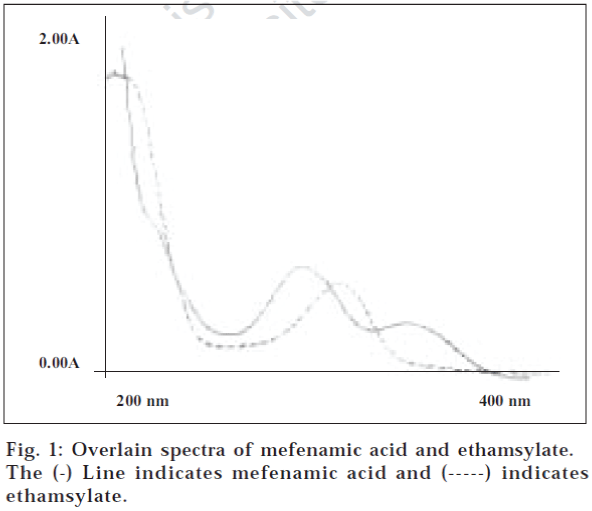 In the second method (Method II), graphical absorbance ratio was used, which is based on the method used by Ghanem et al. [10] and takes advantage of iso-absorptive point [11], of the two drugs i.e. the wavelength of equal absorptivity of the two components of the mixture. The iso-absorptive point was 301 nm (fig. 1). The other wavelength selected is the absorption maximum of one of the components. In this case it was 336 nm, the absorption maximum of mefenamic acid. The concentrations of the two components are related to the ratio of the absorbances at these two wavelengths. The absorbance of the mixture was noted at 336 nm and 301 nm. Calibration curves of mefenamic acid and ethamsylate were plotted in the concentration range 4-28 μg/ml and 10-60 μg/ml respectively (range for which Beer Lambert’s law followed). The absorptivity coefficients were determined for both the drugs and the average value was taken. These values and the absorbance ratio were used to develop another set of two equations, A1= 0.0392 (Cx + Cy) -(3), and A1= 0.0392 Cx {0.3885/QM-0.2003}-(4), where, QM = A2/A1, A1 being absorbance at 336 nm, and A2 being absorbance at 301 nm. Cx and Cy are concentrations of mefenamic acid and ethamsylate, respectively.

Twenty tablets were weighed, and crushed to a fine powder. Powder equivalent to 100 mg of mefenamic acid and 100 mg of ethamsylate (tablet contain 500 mg mefenamic acid and 500 mg ethamsylate) was extracted quantitatively with 10 ml of 0.1N NaOH and (4x20) ml of methanol and volume was made up to 100 ml with methanol. Insoluble excipients were separated by filtration. The solution so obtained was suitably diluted with methanol so that the concentration can be read directly from the calibration curve, and the absorbances were taken at different wavelengths as stated above. Using the Eqns. 1, 2, 3 and 4 concentrations were determined.

The methods developed were found to be accurate, simple and rapid, for routine simultaneous analysis of the formulations. The first method is based on the determination of content of the mefenamic acid and ethamsylate directly from the Eqns. 1 and 2. The second method is based on the absorbance ratio and the absorptivity coefficients were determined, and the values were substituted in the Eqns. 3 and 4 to give the results. The reproducibility, repeatability and accuracy of these methods were found to be good which is evidenced by low values of standard deviation, percent relative standard deviation and standard error (Table 1). The percent range of error (at 95% confidence level) shows the precision of the methods. The accuracy and reproducibility of the proposed methods was confirmed by recovery experiments by adding known amount of the drugs to the preanalyzed formulations and reanalyzing the mixture by proposed methods (Table 2). The percent recovery obtained indicates non-interference from the excipients used in the formulations. Hence, these can be successfully applied for simultaneous estimation of mefenamic acid and ethamsylate in pharmaceutical formulations, as both the methods are simple, sensitive, precise and economical as well.

Table 1: Compilation of results of statistical analysis of commercial formulations.