A high performance liquid chromatography method was established for simultaneously determining four bioactive components, salicin, liquiritin, paeonolum, and imperatorin in Fengshiding capsule, a widely used traditional Chinese medicine for treating rheumatic disease. The chromatographic separation was performed on a Shimadzu Shim-pack Stable Bond C 18 column using gradient elution with methanol and water. The analytical method was validated through precision, repeatability and stability, and the relative standard deviation values were less than 3%, respectively. The recoveries of the four investigated compounds ranged from 95.80 to 101.21% with relative standard deviation values less than 3.2%. Then this proposed method was successfully applied to determine six batches of Fengshiding commercial products of capsule dosage form from two pharmaceutical factories. This study might provide a basis for quality control for this traditional Chinese medicine preparation.

The Fengshiding capsule, a well-known formula of traditional Chinese medicine (TCM), is generally used for the treatment of rheumatic and rheumatoid arthritis, scapulohumeral periarthritis, cervical spondylopathy with better clinical efficacy and fewer side effects compared with standard medical treatments [1]. The formula of Fengshiding consists of four herbs, namely Alangium platanifolium (Sieb. et Zucc.) Harms, Angelica dahurica Benth. Et Hook., Cynanchum paniculatum (Bge.) Kitag., and Glycyrrhiza uralensis Fisch. The combination of these medicinal materials has been reported to be significant in the enhancement of promoting blood circulation, removing obstruction in channels, antiinflammatory and analgesia.

Modern pharmacological studies have revealed that these four components were related to the antirheumatic effect. As the major compound of Alangium platanifolium, salicin (SL) has been reported to exhibit antiinflammatory [2] and analgesic [3] activities. The bioactive compound, liquiritin (LQT) in Glycyrrhiza uralensis, had antioxidant and antiapoptotic effects [4]. Recent pharmacological studies indicated that paeonol (PN) from Cynanchum paniculatum had antioxidant, antiinflammatory and anticoagulative effects [5-7]. Imperatorin (IPT) from Angelica dahurica, had also been found to have antiinflammatory [8], antiapoptic [9], and antioxidant [10] functions (see fig. 1 for their chemical structures). Moreover, these components were derived from four herbs and had been used as phytochemical markers for the quality control in the Chinese Pharmacopeia. Therefore, it is of great importance to develop a rapid and sensitive on-line method to identify and characterize the systematic chemical profile of Fengshiding capsule. 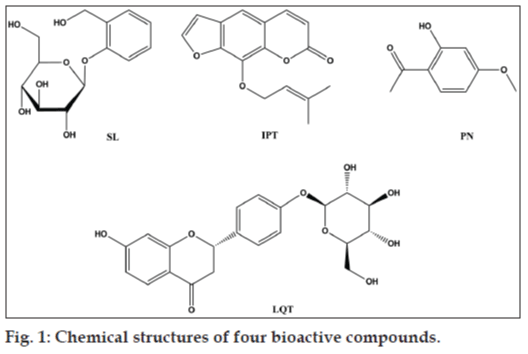 Several methods such as high performance liquid chromatography (HPLC) [11-17], thin layer chromatography [18], nonaqueous capillary electrophoresis [19], fluorescence spectrometry [20], and capillary zone electrophoresis [21,22] have been reported for the determination of these constituents. These methods made significant contributions to the studies of the quality control of herbs and Chinese medicinal preparations, while they were inclined to determine the limited compounds. So a new reverse-phase high-performance liquid chromatography (RP-HPLC) method for simultaneous determination of four biological active components with ultraviolet detector (UV) is required to address the limitations of the previous techniques. This study will facilitate the comprehensive quality control of Fengshiding capsule and related commercial products.

Reference substances of LQT, PN, and IPT were purchased from National Institute for the Control of Pharmaceutical and Biological Products (Beijing, China). SL was obtained from Sigma (Schnelldorf, Germany). HPLC grade methanol was purchased from Fischer (Waltham, CT, USA). Deionized water for HPLC analysis was purified by a Milli-Q system (Milford, MA, USA). Other reagents were of analytical grade.

Six batches of Fengshiding capsule samples were collected from two Chinese herb manufacturers, namely Zhengzhou Handu Pharmaceutical Group Co., LTD and Jilin Jichun Pharmaceutical Co., LTD (A and B). Sample 1-3 and 4-6 were produced from manufactures A and B, respectively.

The HPLC analysis was performed on a Shimadzu LC-20AT liquid chromatograph, equipped with an on-line degasser, a prominence UV detector (SPD-20A), a binary pump, a column compartment, and an automatic injection system. All the data were processed using Shimadzu LC Solution Empower Software.

Fengshiding capsule samples were first ground into fine powder. Fine powder (1 g, 75 mesh) was immersed in 25 ml methanol-water (50:50, v/v) and then ultrasonic for 30 min with a 50º-water bath at 100 w. After that, it was maintained at room temperature for 30 min. After centrifugation at 6000×g for 10 min, the supernatant was filtered through 0.45 μm membranes prior to use, and the sample volume injected was set at 20 μl.

A stock solution of four reference substances was prepared in the concentration of 128.16 μg/ml for SL, 100.00 μg/ml for LQT, 148.32 μg/ml for PN and 132.40 μg/ml for IPT, respectively, and stored at 4º until use. A standard working solutions of the mixtures were prepared by diluting stock solutions with methanol to desired concentrations. Each calibration curve consisted of six different concentrations and was performed in triplicate. All calibration curves were constructed from peak areas versus their concentrations. The limits of detection (LOD) and quantification (LOQ) for each analyte were calculated with corresponding standard solution on the basis of a signal-to-noise ratio (S/N) of 3 and 10, respectively.

The intraday and interday variations were measured to determine the precision of the developed method. The intraday variability was examined on six different extracted solutions prepared according to the method mentioned previously from the same sample within one day, and the interday reproducibility was determined for three consecutive days.

To further evaluate the accuracy of the method, a recovery test was carried out by spiking certain standard solutions, having a known amount of investigated compounds into an accurately weighed portion of fine powder (0.5 g, 75 mesh) sample, in which the contents of four analytes had been calculated according to the peaks corresponding to their standards. Then, the resultant samples were extracted and analyzed using the method described earlier. The average recoveries were calculated by the formula: Recovery (%)=(amount found–original amount)/spiked amount×100, and relative standard deviation (%)=(SD/mean)×100.

Stability study was performed with the same sample solution after storage at room temperature for 2, 4, 6, 8, 12, and 24 h. Variations were expressed as RSD.

In order to obtain good separation, different mobile phase systems (CH3OH–H2O, CH3OH–H2O–Acid, CH3CN–H2O, CH3CN–H2O–Acid, CH3CN–CH3OH– H2O) were attempted to elute the investigated four components. It was found that SL and PN could hardly be separated when acetonitrile was used. However, when acetonitrile was replaced by methanol, the situation was greatly improved and satisfactory resolution was obtained. The type and concentration of acids (0.05% formic acid, 0.05% acetic acid and 0.05% phosphoric acid) were also examined. Addition of acid in mobile phase seemed to have no obvious effect on the separation. Considering the total resolution of the chromatographic separation and the running time, the mobile phase CH3OH–H2O was chosen for the separation. It was also suggested that separation was better when column temperature was kept at 30° than 20, 25, 35, or 40°. Maximally efficient detection can be obtained by selecting the wavelength where the component has the maximum absorption. These four analytes belong to four different structural types, namely coumarins (IPT), organic acids and glycoside (PN and SL), and flavone glycoside (LQT), which have rather different UV absorption properties. In this study, detection wavelengths of 276 nm for SL, PN and LQT, and 300 nm for IPT were chosen to record chromatograms. The typical chromatographic profiles of standard solutions and the samples were shown in fig. 2.

Under current chromatographic conditions, all the calibration curves showed good linear regression (r>0.999). The results are given in Table 1. The LOD ranged from 0.099 to 0.211 ng for the four compounds, and the LOQs were less than 0.705 ng, indicating that this method is sensitive for the quantitative evaluation of Fengshiding capsule. Validation studies of the method as per the ICH guidelines [23] proved that this assay had good reproducibility, and the intra-day and inter-day variations were less than 3.0% for all analytes. This indicated that the newly developed analytical method was accurate with the recovery in the range of 95.80%-101.21%, with RSDs less than 3.2%. Table 2 showed the results of the tests of precision and accuracy. The analytes in the sample solution were stable within 24 h, with a relative standard deviation of 0.93%-1.72%.

Table 2: Precision and accuracy date of the validation tests for the proposed hplc method

The developed HPLC analytical method was subsequently applied to simultaneously determine the four bioactive compounds in six batches of Fengshiding capsule samples, and the calculated contents of analytes were shown in Table 3. The results indicated that the concentrations of each component in the samples from the same manufacturer had much higher RSDs, in addition, there was notable difference among the manufacturers. There are some possible factors, such as volatile components, preparation procedures, the quality of herbal materials and the total quality control of preparation, which lead to the variance of these components. Therefore, much attention must be paid to the preparation quality of Fengshiding capsule before clinical application.