Simultaneous spectrophotometric determination of Valdecoxib and Tizanidine in tablets

Two simple, precise and accurate methods for simultaneous estimation of valdecoxib and tizanidine in combined dosage form, have been described. Method 1 involves formation of Q-absorbance equation at 239.6 (isoabsorptive point) and at 241 nm, while method 2 involves formation of simultaneous equation at 241 and 229 nm, using methanol as solvent. Both the methods were validated, and the results were compared statistically. They were found to be precise, accurate, and specific. The proposed methods were successfully applied to estimation of valdecoxib and tizanidine in combined tablet formulation.

Valdecoxib (VAL) is chemically a diaryl substituted isoxazole. The chemical formula is 4-(5-methyl-3-phenyl-4-isoxazoyl) benzene sulfonamide [1,2]. It is a non-steroidal antiinflammatory agent, a selective inhibitor of cyclooxygenase–2 (COX–2) indicated for oral administration, for the treatment of Osteoarthritis and Rheumatoid arthritis [3]. Valdecoxib is official only in the Martindale Extra Pharmacopoeia. A survey of literature reveals that valdecoxib is estimated by Solid phase LC in urine samples [4]. Tizanidine hydrochloride (TZN), 5– Chloro-N-(4,5-dihydro-1-H-imidazol-2-yl)-2,1,3– benzothiadiazol–4–amine is an α adrenergic receptor agonist, which is a centrally active skeletal muscle relaxant, and is chemically different from other muscle relaxants. [5] In addition to its muscle relaxant properties and central analgesic effect, TZN also has gastroprotective effect [6]. TZN is an imidazoline derivative, and not official in any of the Pharmacopoeia. Several analytical methods for the estimation of tizanidine using HPLC [7], isocratic SFC [8], colorimetry [9,10], and UV spectrophotometry [11], have been reported. Reddy et al. [12] reported simultaneous spectrophotometric estimation of tizanidine and nimesulide from combined dosage forms, using methanol as a solvent. Moreover, the literature survey revealed that so far, no method has been reported for estimation of TZN and VAL in combined dosage forms, hence we attempted to develop a simple, accurate, and economic analytical method. This paper describes two simple UV spectrophotometric methods for simultaneous estimation of TZN and VAL in tablets, using methanol as solvent. 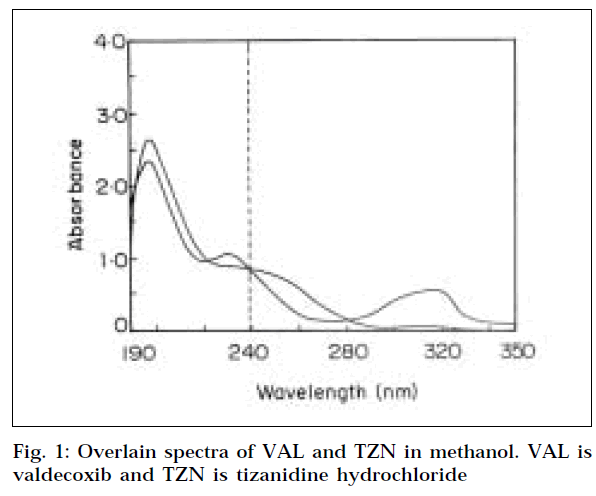 Fig 1: Overlain spectra of VAL and TZN in methanol. VAL is valdecoxib and TZN is tizanidine hydrochloride

For the estimation of drugs from the commercial formulations, twenty tablets of two brands Valeron (CFL Pharmaceuticals, Mumbai) and Zulu-V (Unichem, Mumbai) containing 2 mg of tizanidine hydrochloride and 50 mg of valdecoxib were weighed, and finely powdered. For methods 1 and 2, powder equivalent to 50 mg of VAL was accurately weighed. The mixture was then extracted with methanol, the extract was filtered, and the filtrate was appropriately diluted to get final concentration 1 μg/ml of TZN and 10 μg/ml of VAL. Absorbance of this solution was measured at appropriate wavelengths, and values were substituted in the respective formulae to obtain concentrations.

The overlain spectra of both the drugs showed that the peaks are well resolved, thus satisfying the criteria for obtaining maximum precision, based on absorbance ratios. [13] The criteria being the ratios, (A2/A1)/(ax2/ax1) and (ay2/ay1)/(A2/A1), should lie outside the range 0.1-2.0 for the precise determination of Y and X, respectively. Where A1, A2 represents the absorbance of the mixture at λ1 and λ2, ax1, and ax2 denote absorptivities of X at λ1 and λ2, and ay1, and ay2 denote absorptivities of Y at λ1 and λ2, respectively. In this context, the above criteria was found to be satisfied for VAL (X) and TZN (Y), where λ1 is 239.6 nm and λ2 241 nm for Q-absorbance method, and λ1 is 241 nm and λ2 is 229 nm for simultaneous equation method.

Three wavelengths that could serve as isoabsorptive points were 222 nm, 239.6 nm, and 280.2 nm, as determined by evaluation of overlain spectra. By comparing the absorptivity of both the drugs at these wavelengths, 239.6 nm was found suitable for the analysis, since both the drugs gave same absorptivity at this wavelength. The other wavelength i.e. the λmax of VAL selected at 241 nm. Hence 239.6 and 241 nm were selected for the formation of Q-absorbance equation.

In simultaneous equation method, two wavelengths i.e. λmax of both the drugs were required. The spectra of TZN showed two distinct peaks, one at around 229 nm, and other at 371 nm. The former was selected for analysis of TZN. The λmax of VAL was 241 nm, which was used for its estimation.

The proposed methods were successfully used to estimate the amount of VAL and TZN, present in two of the marketed tablet formulations containing VAL and TZN. The assay values for both the tablets were comparable with the corresponding labeled amounts, as shown in Table 1. The validation parameters of proposed methods are summarized in Table 1 and 2. On observing the validation parameters, both the methods were found to be precise accurate and specific. When compared to method 2, method 1 gave assay results close to 100%. Hence, the proposed methods can be employed for routine assay of tablets containing VAL and TZN.

Method 1 is Q-absorbance method while Method 2 is the Simultaneous equation method, RSD is the relative standard deviation while r2 is the correlation coefficient, a; at 241 nm, b; at 239.6 nm, c; at 229 nm.

The authors thank Blue Cross Laboratories Ltd., Mumbai, for the sample of pure tizanidine hydrochloride and Novartis India Ltd., Mumbai for the pure sample of Valdecoxib.