Three simple, accurate and economic methods multicomponent, two wavelength and simultaneous equations using area under curve have been described for the simultaneous determination of gatifloxacin and ornidazole in tablet dosage form. Gatifloxacin shows absorption maximum at 287.5 nm and ornidazole shows absorption maximum at 319.5 nm in distilled water. Beer's law was obeyed in the concentration range of 2-20 µg/ml for gatifloxacin and 10-60 µg/ml for ornidazole. The methods allow rapid analysis of binary pharmaceutical formulation with accuracy. Results of analysis for three methods were validated statistically and by recovery studies and were found satisfactory.

Gatifloxacin (GF) and ornidazole (OZ) are available in the tablet dosage form in the ratio of 2:5. GF, a fluoroquinolone derivative has antibacterial activity [1-3]. OZ, a 5-nitroimidazole derivative has antiprotozoal and antiamoebic activity [1-3]. Literature survey revealed that HPLC [4-7] and UV [8-11] methods for analysis of GF and OZ as single component systems have been reported. An attempt has been made to estimate GF and OZ simultaneously by spectrophotometric method.

A Shimadzu UV/Vis spectrophotometer, model 1601 was employed (spectral bandwidth of 2 nm) with a pair of 1 cm quartz cells. Standard gift samples of GF and OZ were obtained from Emcure Pharmaceuticals Ltd., Pune. Distilled water was used as solvent in the study. The stock solutions (100 μg/ml) of GF and OZ were prepared by dissolving accurately 10 mg of drug in double distilled water separately. The maximum absorbance of GF and OZ was obtained at 287.5 nm and 319.5 nm respectively. GF and OZ show linearity in the concentration range of 2-20 μg/ml and 10-60 μg/ml at their respective wavelength maxima.

For all three methods, same mixed standards in the linearity range for each drug in the ratio of 2:5 from 4-20 μg/ml of GF and 10-50 μg/ml of OZ were prepared by diluting appropriate volumes of standard stock solutions. The scanning of solutions of GF and OZ was carried out in the range of 400 to 200 nm.

For multicomponent analysis using inbuilt software of instrument, two sampling wavelengths 287.5 nm and 319.5 nm were selected for the estimation two drugs. The concentrations of mixed standard solutions were entered in the multicomponent mode. The absorbance spectra of mixed standards and sample solutions were measured at selected wavelengths as shown in fig.1. The instrument gives individual concentration of drug present in the sample solutions directly. 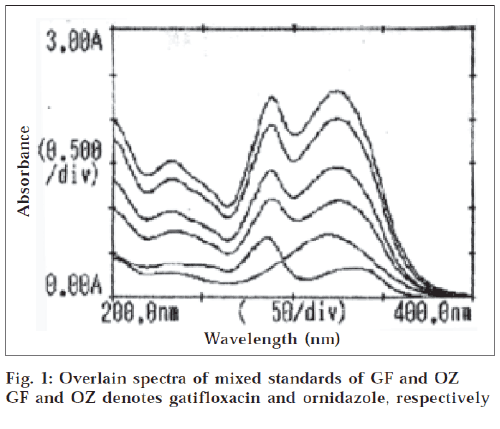 Average weight of twenty tablets was determined and these tablets were crushed to fine powder. The powder sample equivalent to 10 mg of GF and 25 mg of OZ was weighed and transferred in 100 ml volumetric flask and dissolved in distilled water. The content was kept in ultrasonicator for 20 min. Finally the volume was made up to the mark with distilled water and filtered through Whatmann’s filter paper No. 41. The filtered solution was suitably diluted to obtain mixed standards in the Beer-Lambert’s range for each drug in the ratio of 2:5 from 4-20 μg/ml of GF and 10-50 μg/ml of OZ. Mixed sample solutions were scanned using proposed methods as discussed above and the results were obtained and reported in Table 1. Recovery studies were carried out at 80%, 100% and 120% level of the label claim. The percentage recovery of GF and OZ in the sample mixture were determined and reported in Table 1.

A is multicomponent method, B is two-wavelength method and C is simultaneous equations using area under curve method. T1 and T2 are two different brands of tablet formulations. * denotes n = 6, average of six estimations. GF and OZ denotes gatifloxacin and ornidazole, respectively

The coefficient of correlation was found to be 0.9996 for GF and 0.9985 for OZ. The results of tablet analysis and recovery studies obtained by proposed methods were validated by statistical evaluation. The percentage coefficient of variation for both drugs was found to be less than 2%. All the developed methods were found to be simple, rapid, precise, economical and accurate for routine simultaneous estimation of GF and OZ in tablet dosage form. The recovery was close to 100% indicating the reproducibility and accuracy of the methods. The multicomponent method is rapid and easy because it does not require manual calculations. The other methods like two wavelength and simultaneous equations using area under curve are simple and economical but require few simple calculations.

4The authors are thankful to Emcure Pharmaceuticals Ltd., Pune for supplying gift samples of gatifloxacin and ornidazole.